The Seiko 6309-7040 diver’s watch is one of my favourite watches. I have worked on many of them before, and have owned several myself. When my friend Ed got in touch a few months ago about a project involving a large number of 6309s and a box of spare movements, donor watches and other parts I was of course very interested indeed.

Ed and I met up and  we went through all the watches and movements on my timegrapher to get an idea of the health of each individual item, and decide the best course of action.

Unfortunately due to the magnitude of this project I have not had the discipline to take enough photos to do a detailed walk through of the work, it is so easy to forget when you get stuck in.

I do however have some photos, so I thought I would publish them to give you an idea of some of the work involved. After all it is not often you see so many 6309s in one place!

Here is a photo of the project once completed: 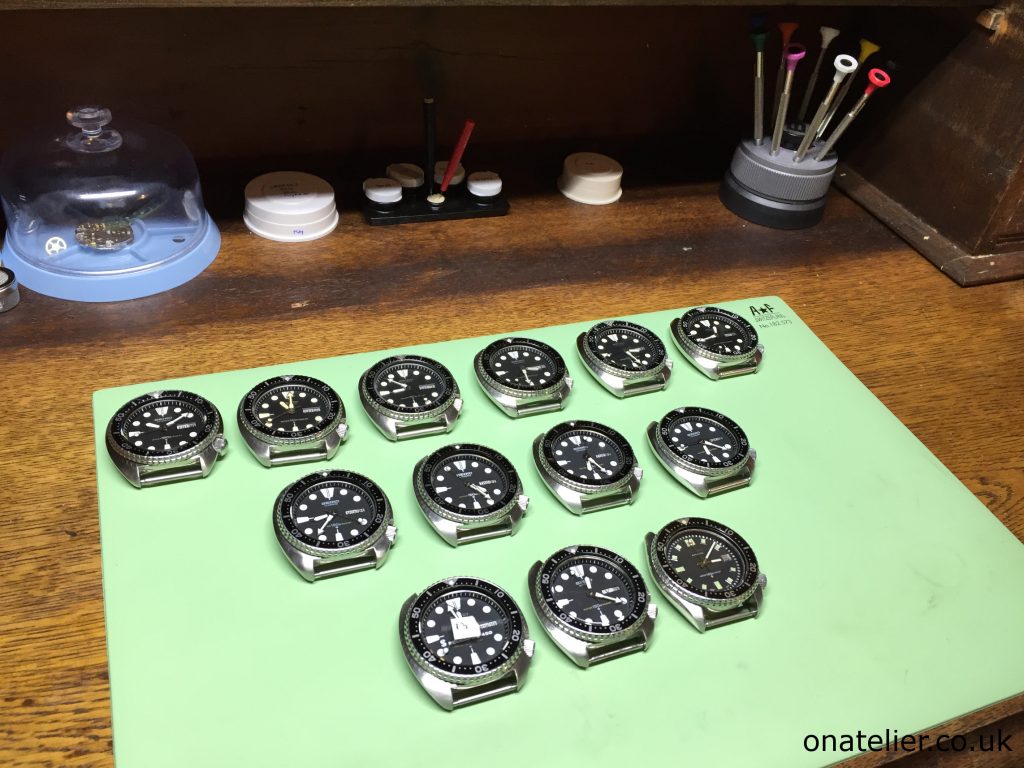 Several of the watches required a full service, which involved:

Here is a photo of one of the movements fully disassembled prior to cleaning. 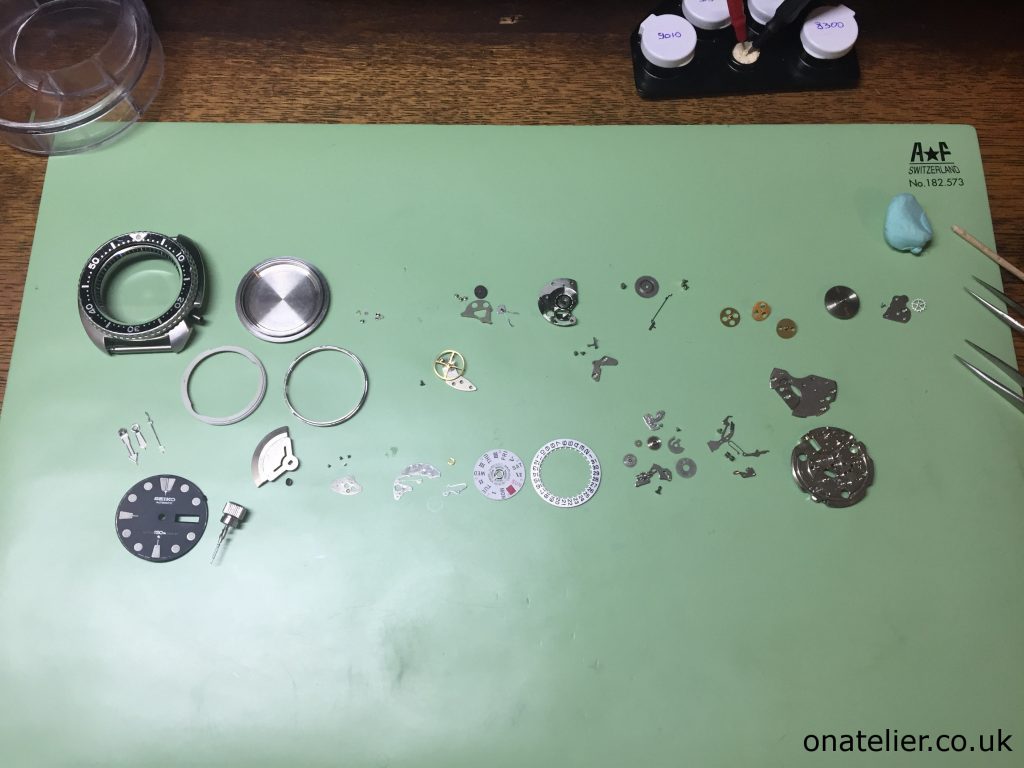 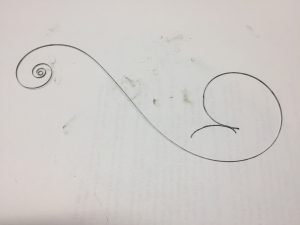 I came across a few typical issues you often see on 6309s throughout the course of the project. There were no show stoppers thanks to the availability of spares through donor watches or NOS (New Old Stock) movements Ed had provided. Some of the issues were: 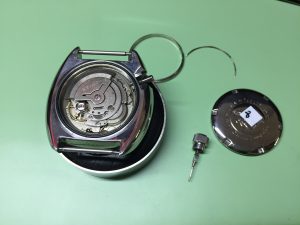 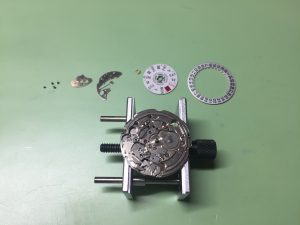 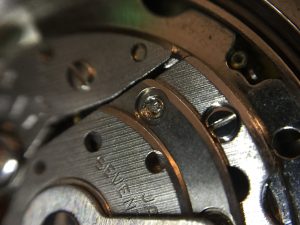 Split screw head which had just been left there. Thankfully there was no corrosion so it was not too difficult to extract and replace it.

There were also some hairspring issues, causing poor amplitude of the balance wheel, and positional errors (difference in timekeeping between horizontal and vertical position).

All the watches which did not require a service were treated to crown and case back gasket replacement, regulation, and pressure test. 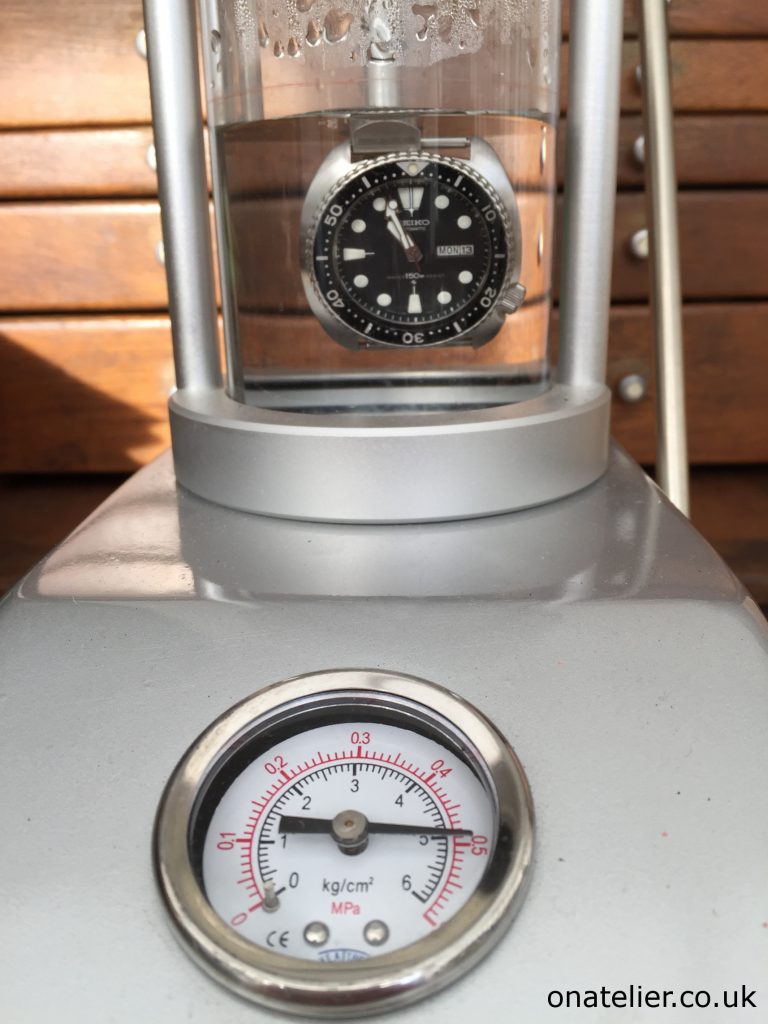 Here is a photo of a crown / stem assembly after rebuild (the design of the 6309-7040 requires a strip down of the assembly to change the crown gasket). 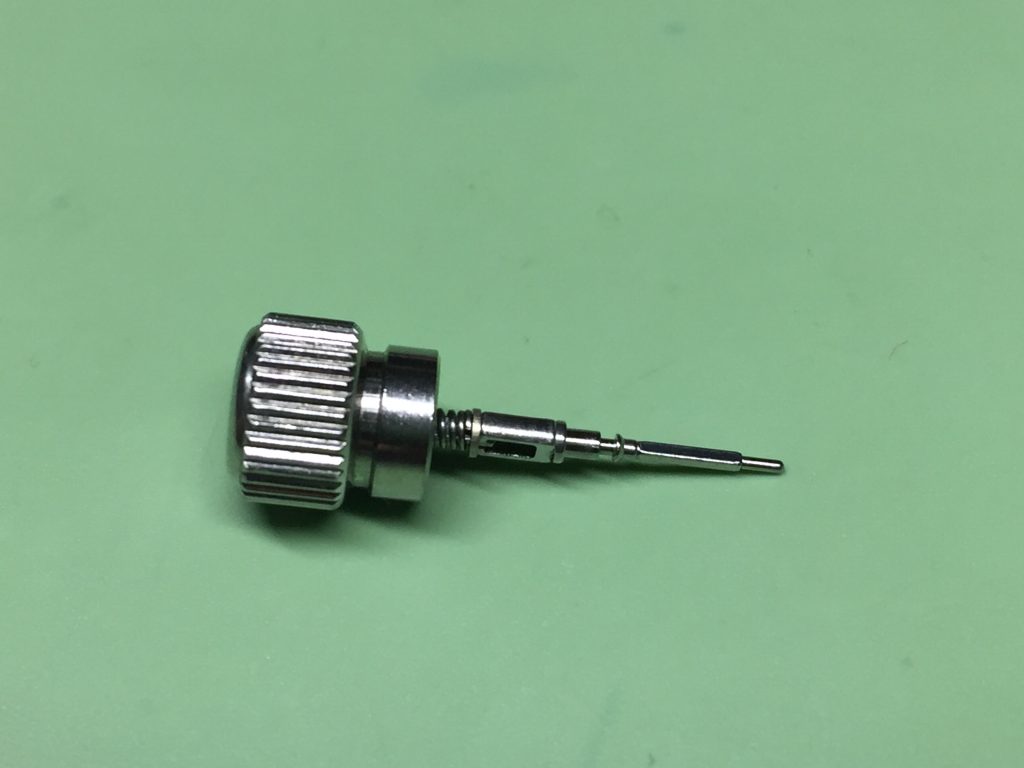 There were also some crystal replacements.

One of the cases had a nasty scratch, which we decided to polish off. 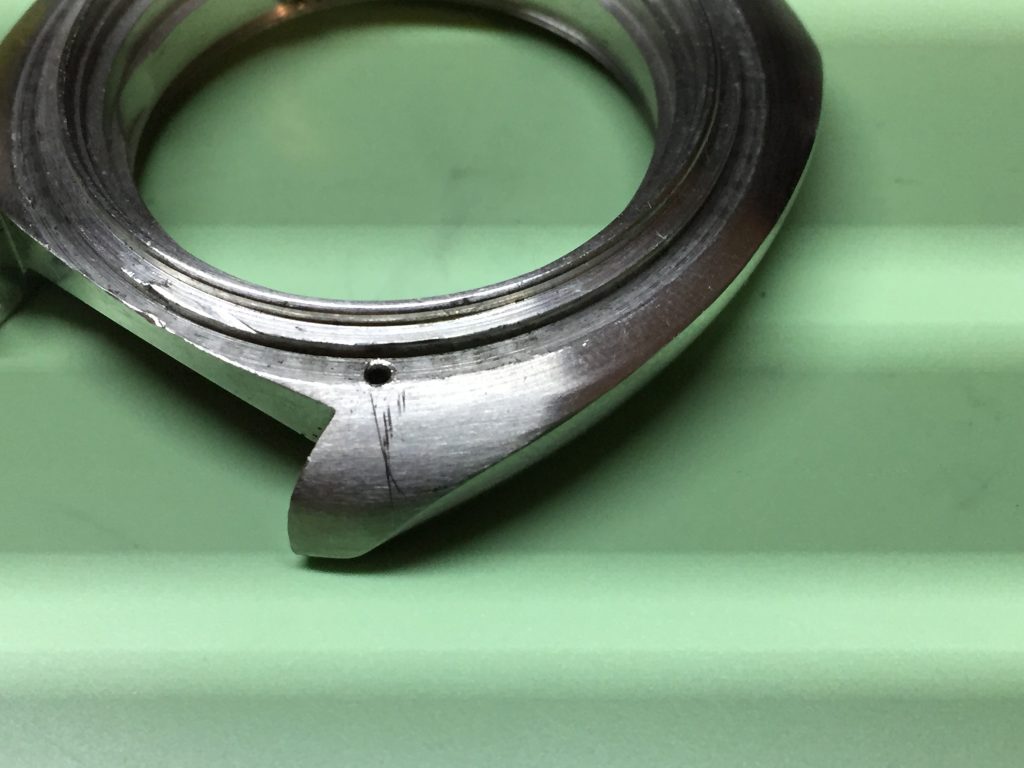 And after, reproducing the circular grain finish of the original. 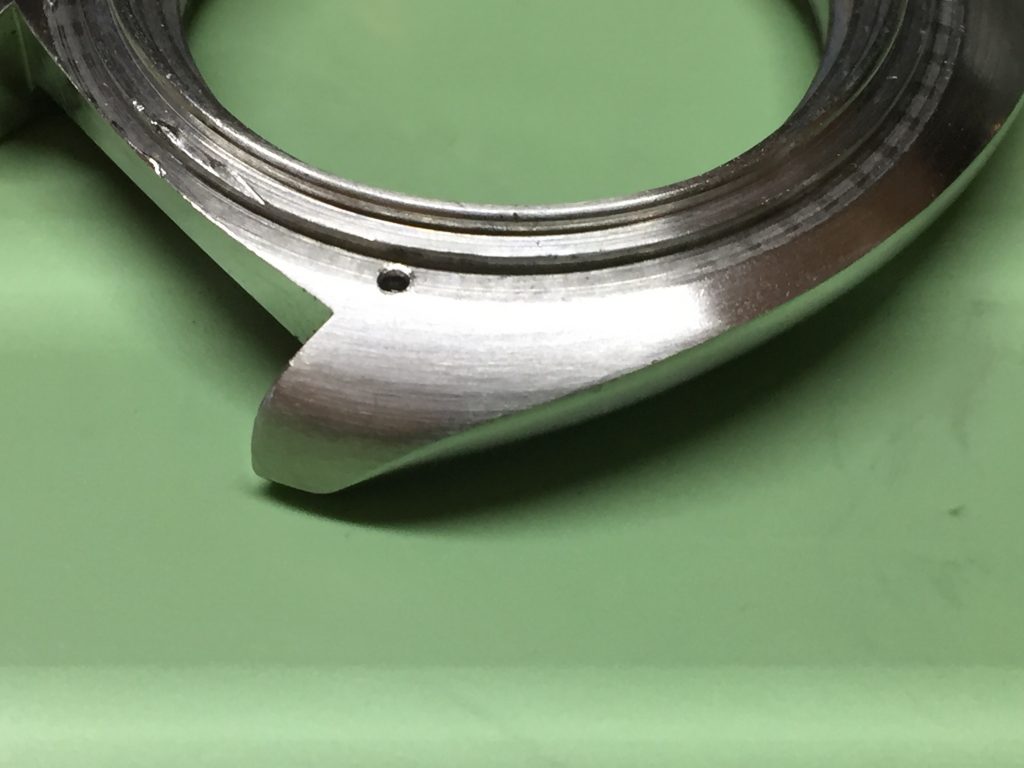 And this is the first video I have ever featured on the blog, showing some of the watch on my cyclotest during testing. It is very soothing to watch isn’t it?

Many of the watches were in original condition. This particular watch had a lovely dial: 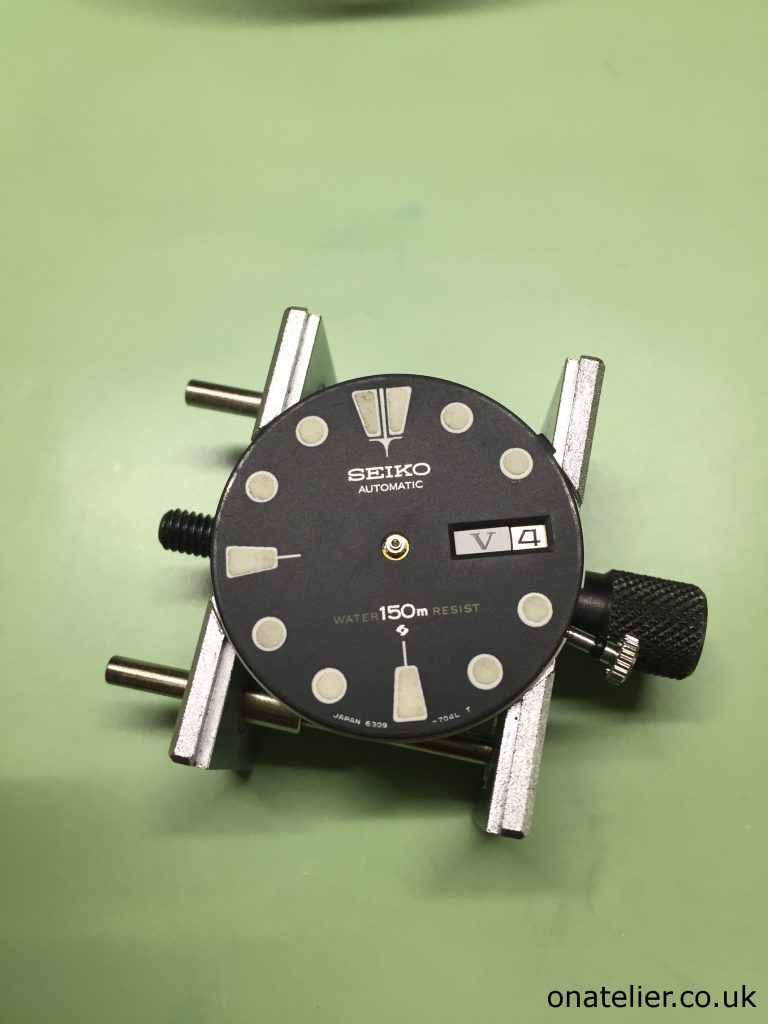 I could not resist a macro shot of one of the lovely markers, which have turned into a lovely shade of cream colour with age. 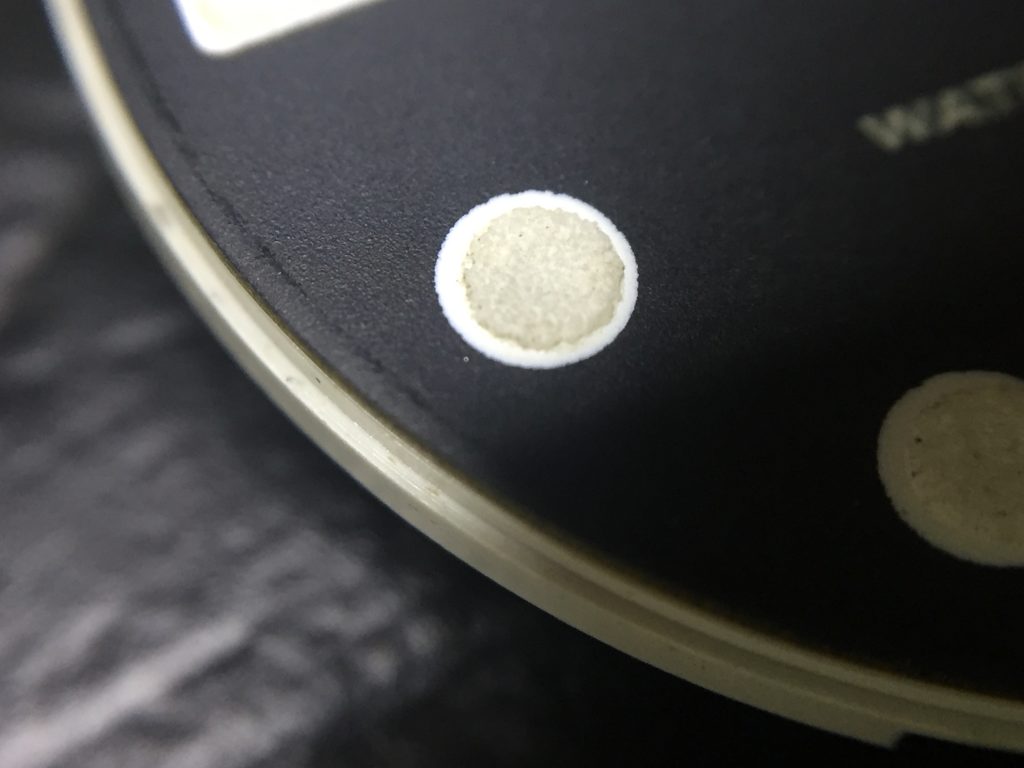 I hope you enjoyed reading this as much as I have enjoyed working on these watches. I would like to take this opportunity to thank Ed for entrusting me with this exciting and unique project, I doubt I will ever have as many 6309s watches on my bench again at any one time!