This week under the loupe I have another very interesting vintage watch with this 9ct gold case Omega Calibre 285. The owner, David, sent me the watch for a service and a bit of TLC. The watch belonged to his late father, and was an engagement present from his mother, so needless to say it has huge sentimental value to David. The serial number dates the production of the watch to 1961. 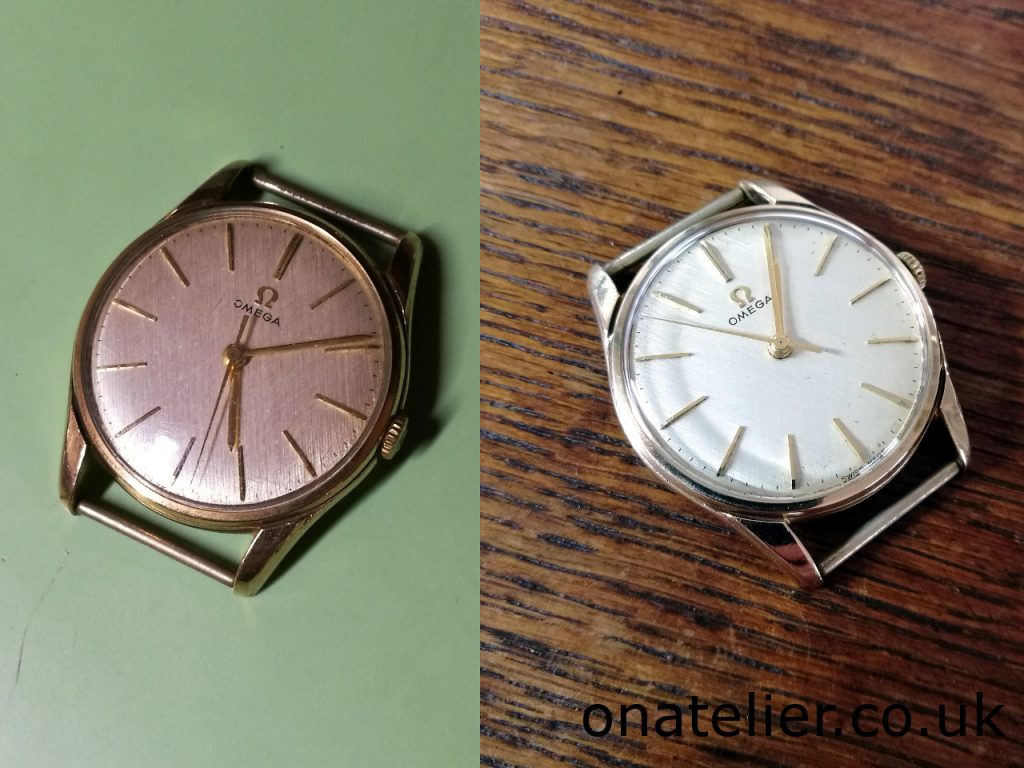 I start the work by opening the case, to reveal the very nice rhodium plated Omega Calibre 285. First impressions are good as the movement looks in reasonably clean condition, albeit with dried oil in the jewels.

Omega’s Calibre 285 has an indirectly driven sweep second, meaning that the seconds pinion is not transmitting power from the mainspring to the escapement as part of the train of wheels. Instead it is driven “outside the train” by the third wheel. The driving wheel is the wheel with 5 spokes which is on top of the train bridge on this picture. 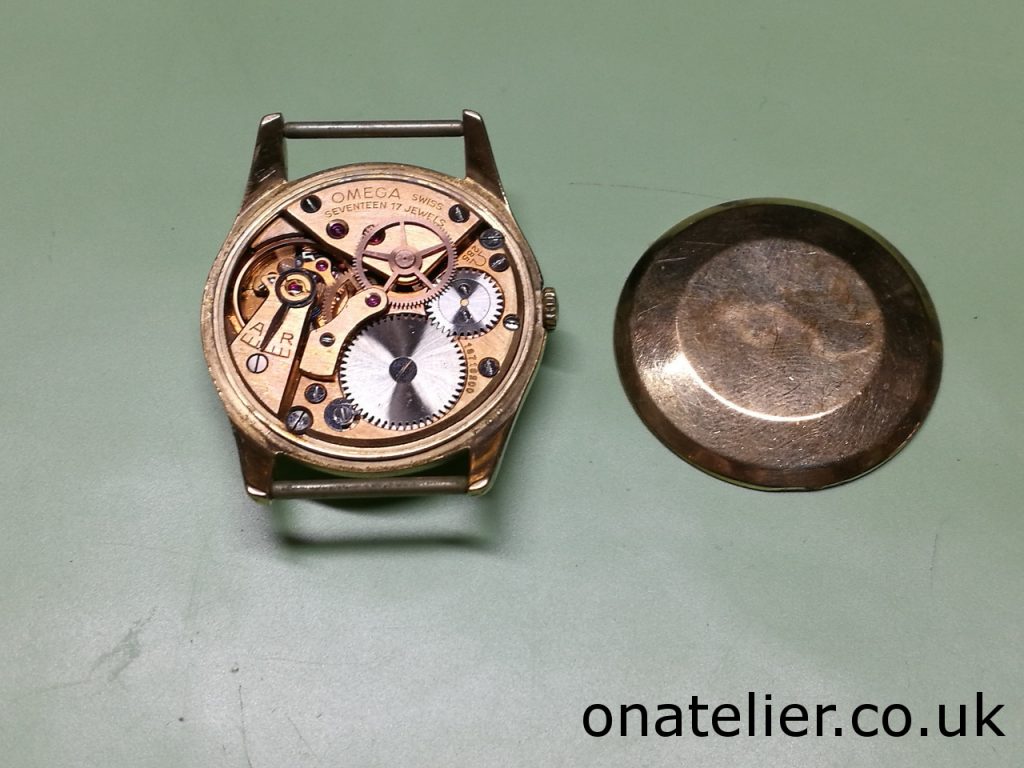 The A.L.D marking on the caseback indicates that the case was produced by  maker Dennison who were based in the UK during that era. It is hallmarked as 9ct gold, and bears the Birmingham assay office mark for 1961-1962, which is consistent with the production date of the movement. There are also a couple of watchmakers’ signatures scribed inside the caseback. I often see these on vintage watches, I wonder if there are still watchmakers out there doing this, I certainly do not, a record of my repair in a spreadsheet is less intrusive! 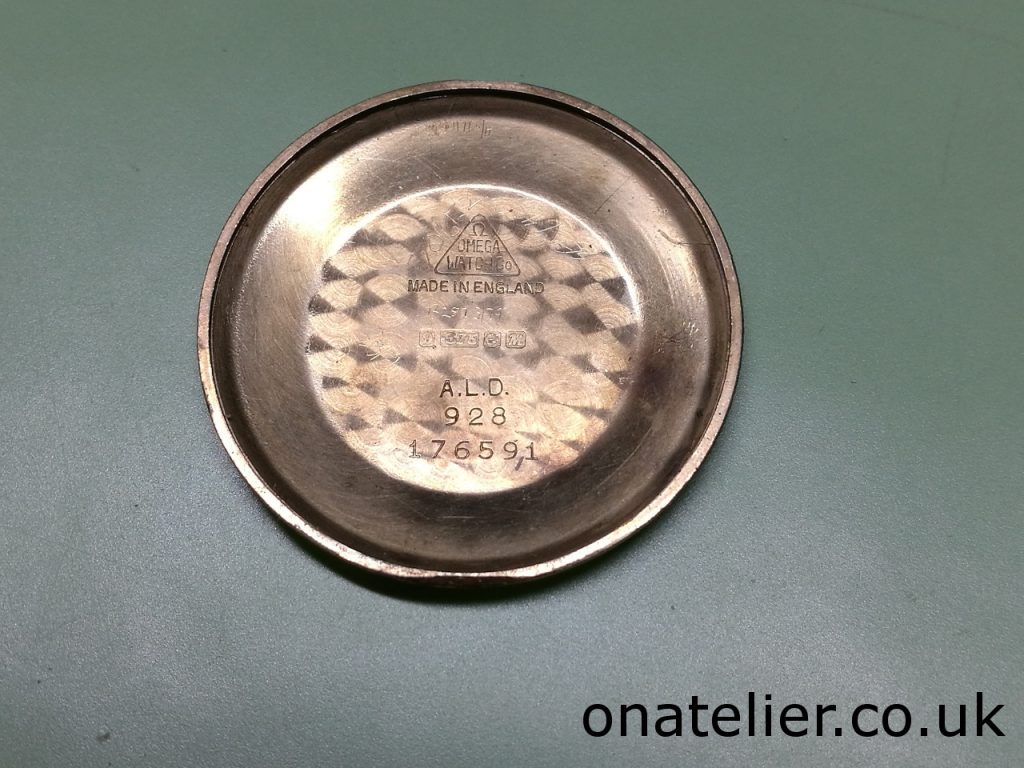 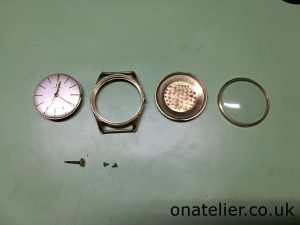 Movement is out of the case.

The linen effect texture of the dial on this watch is incredibly beautiful, worth a close up. The photo does not even get close to doing it justice! 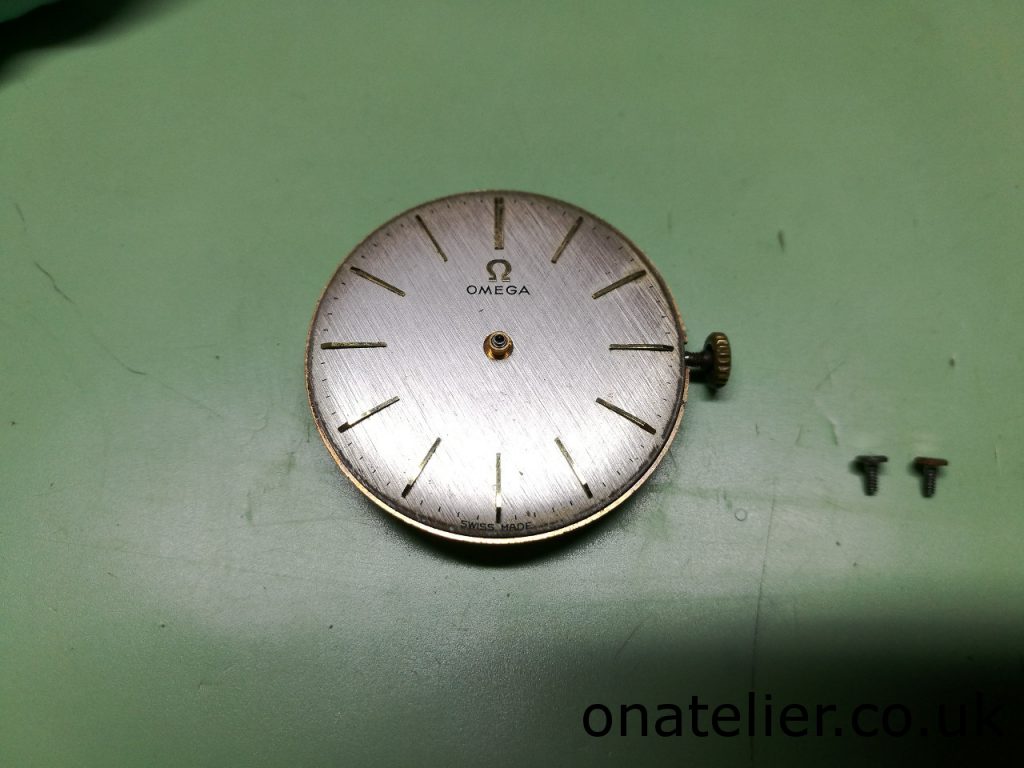 And here we are with the calibre 285 on the movement holder, ready for the strip down to commence. 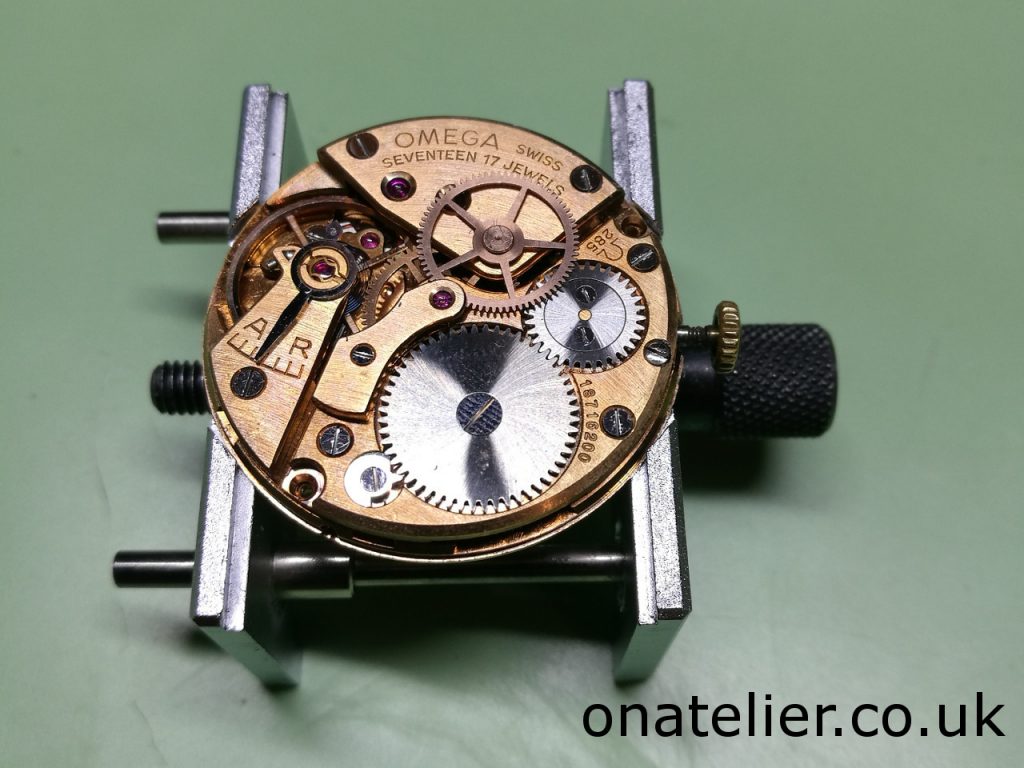 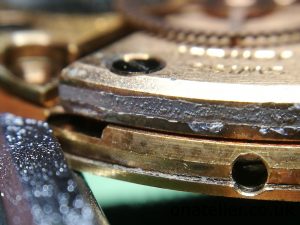 There is white corrosion on the side of the plate and bridges, this will be cleaned up with pegwood before the ultrasonic clean.

This is a view of the sweep second spring, which pushes the sweep seconds pinion up against its bridge. (On some other Omega calibres, the spring is pushing down with no bridge to support the pinion). The spring needs careful adjustment to avoid a jerky seconds hand. 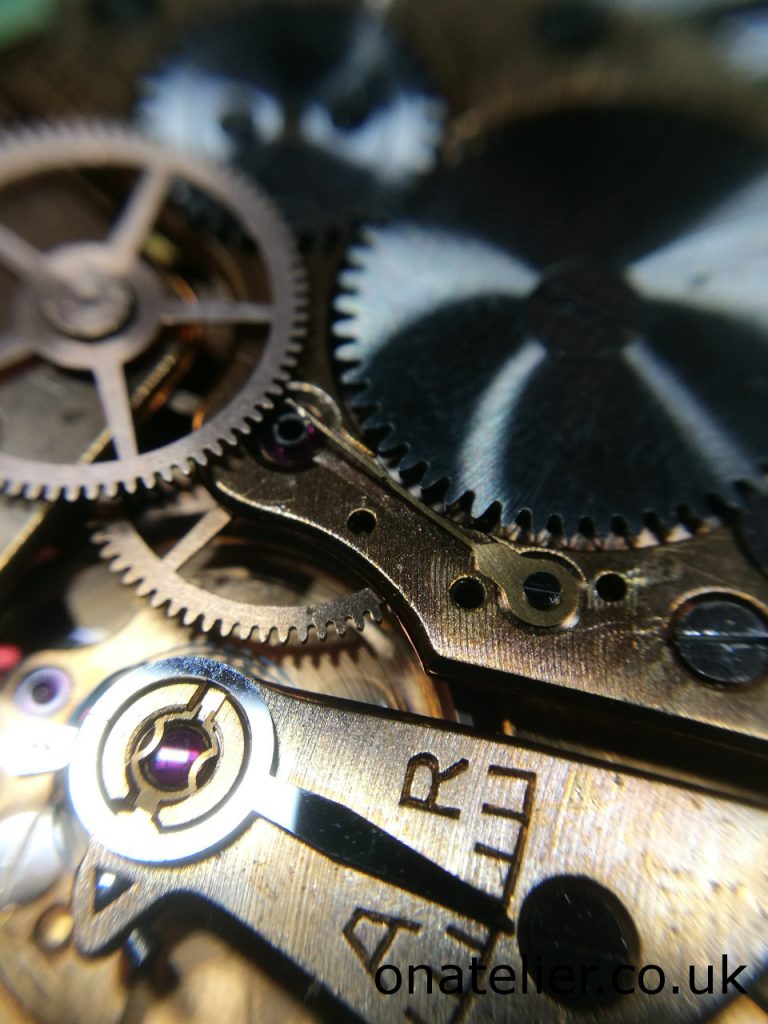 The balance is removed. It is a blue hairspring with breguet overcoil, so needs to be treated with the greatest respect, I can imagine a replacement would be neither cheap nor easy to come by! 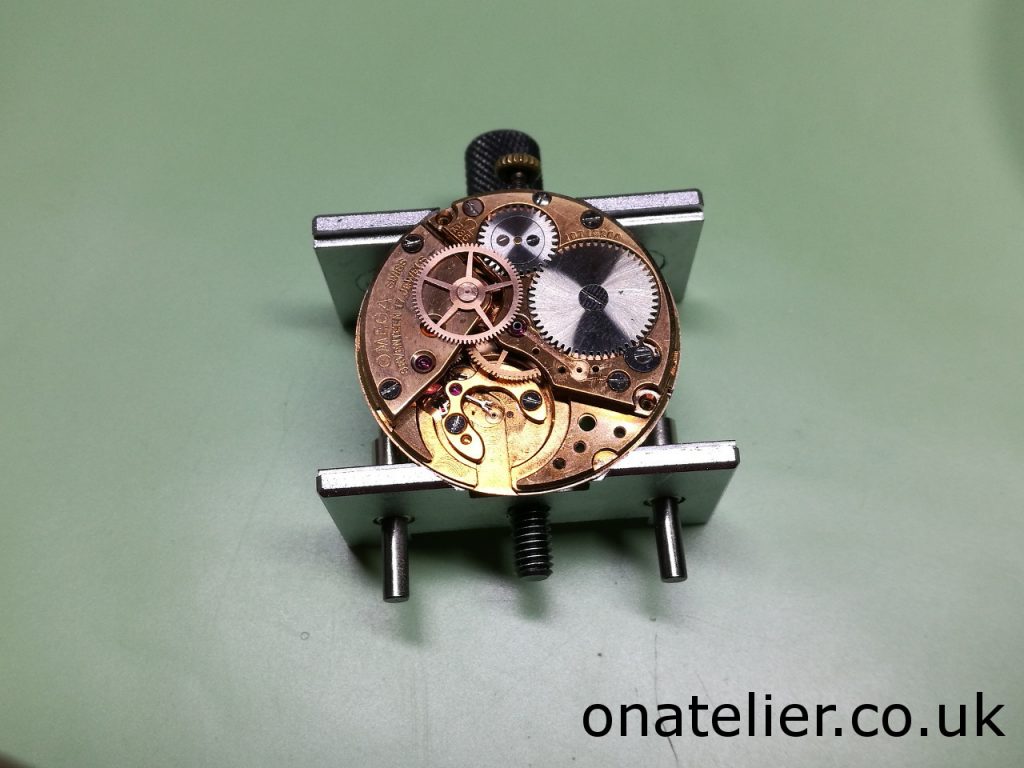 With the balance out of harms way, I move to the lower side of the movement. 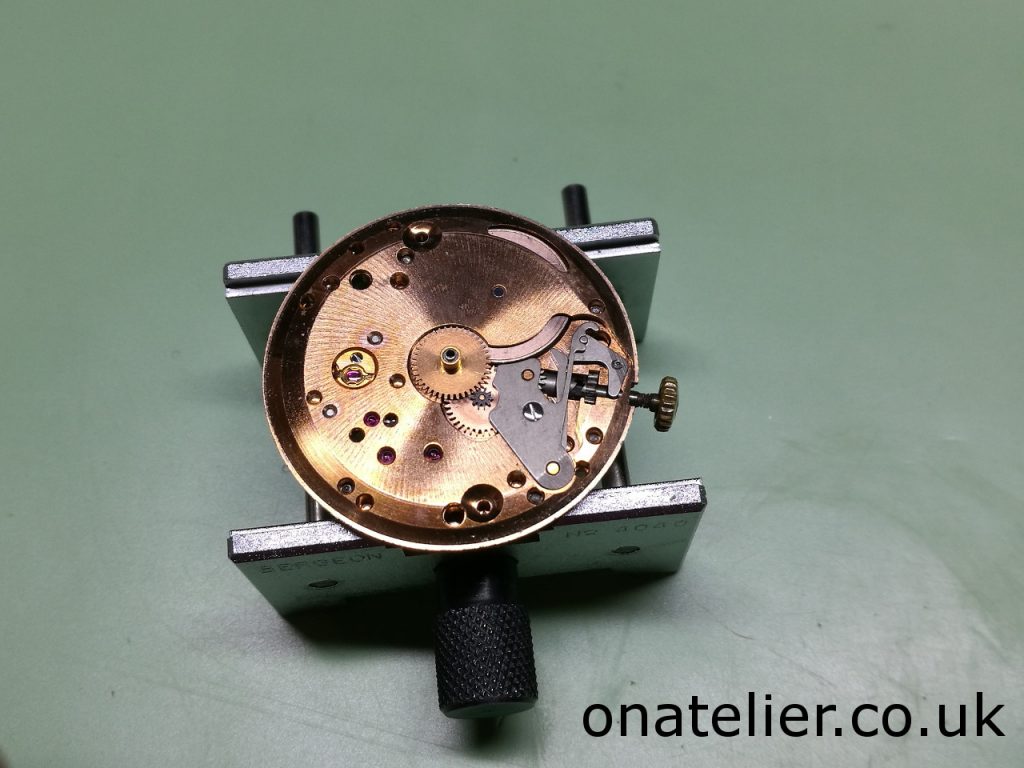 I soon have the whole Calibre 285 stripped down. 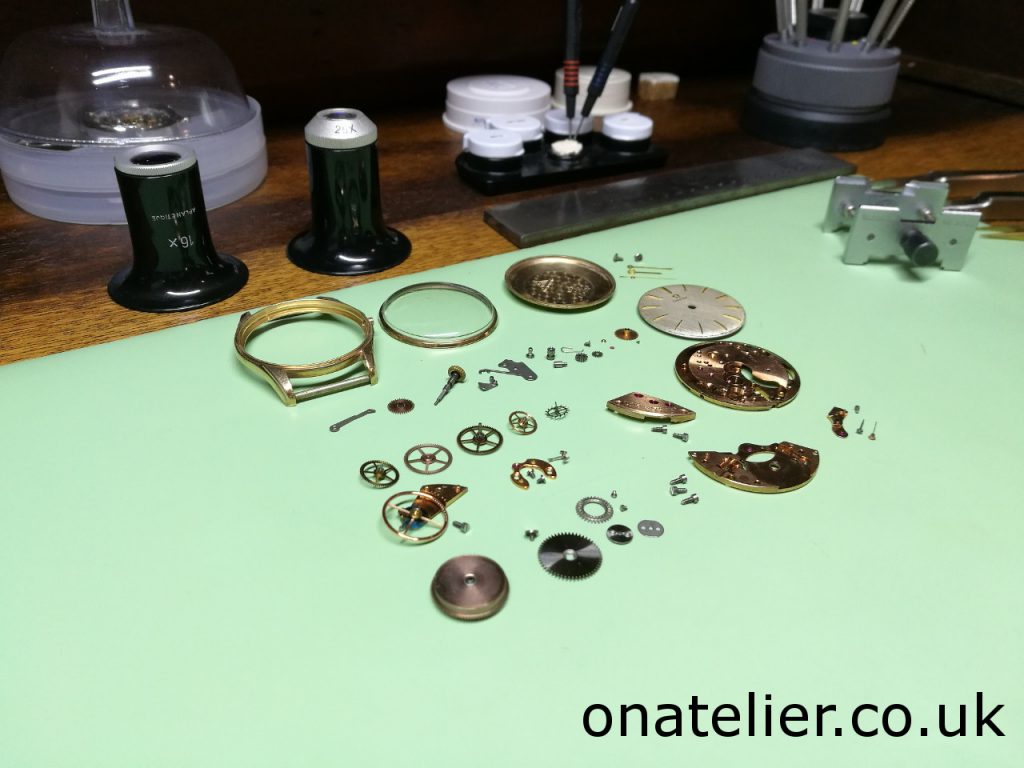 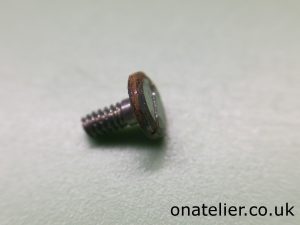 There is some oxidation on the movement holding screw, I will clean that up before the ultrasonic clean.

The mainspring is taken out from the barrel. 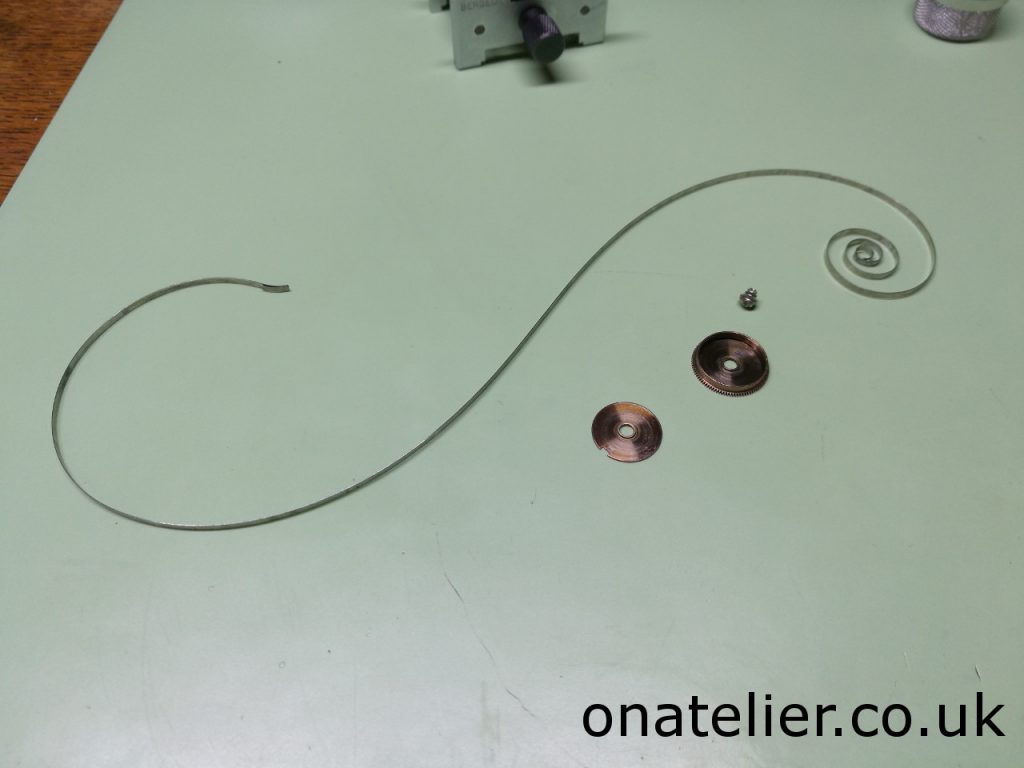 All components come out clean and shiny after ultrasonic clean of the parts. 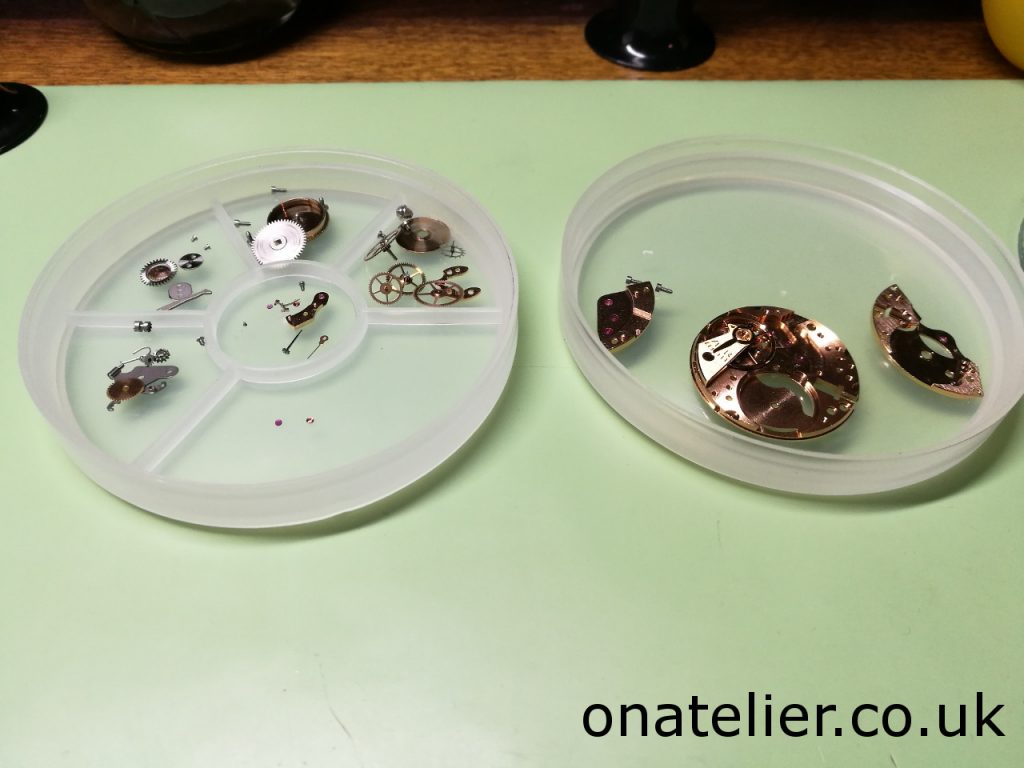 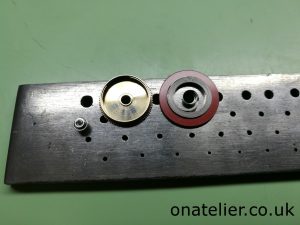 I start rebuild with a new mainspring as usual.

I build the train, on this picture you can see the barrel, third wheel, fourth wheel and escape wheel. 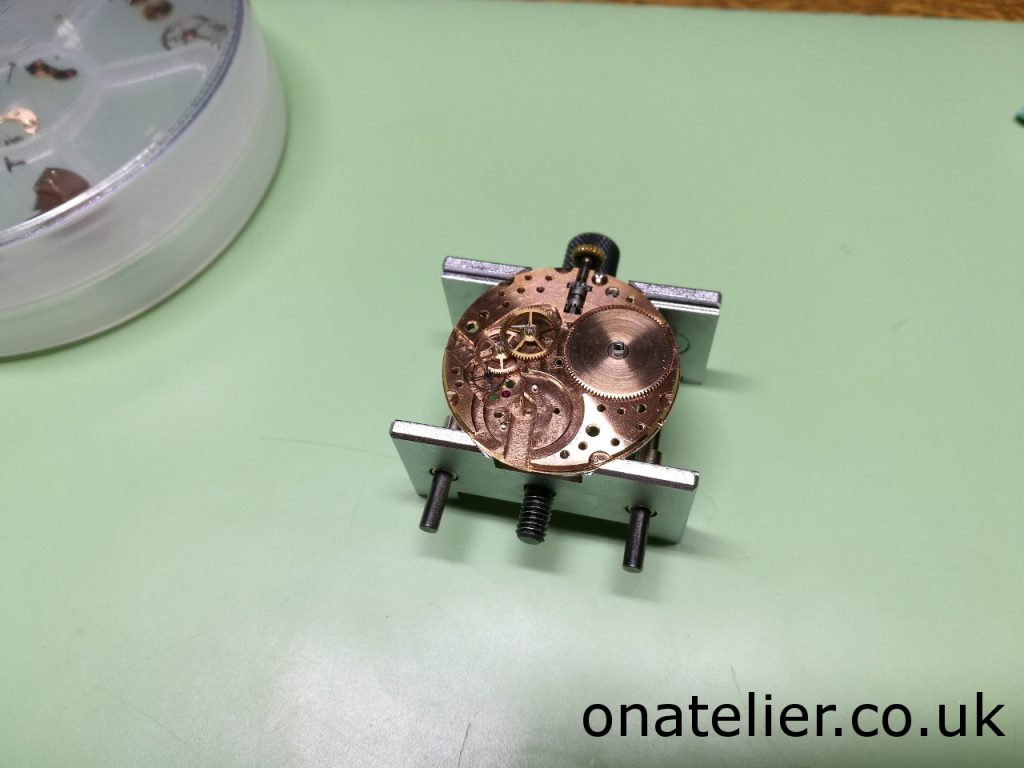 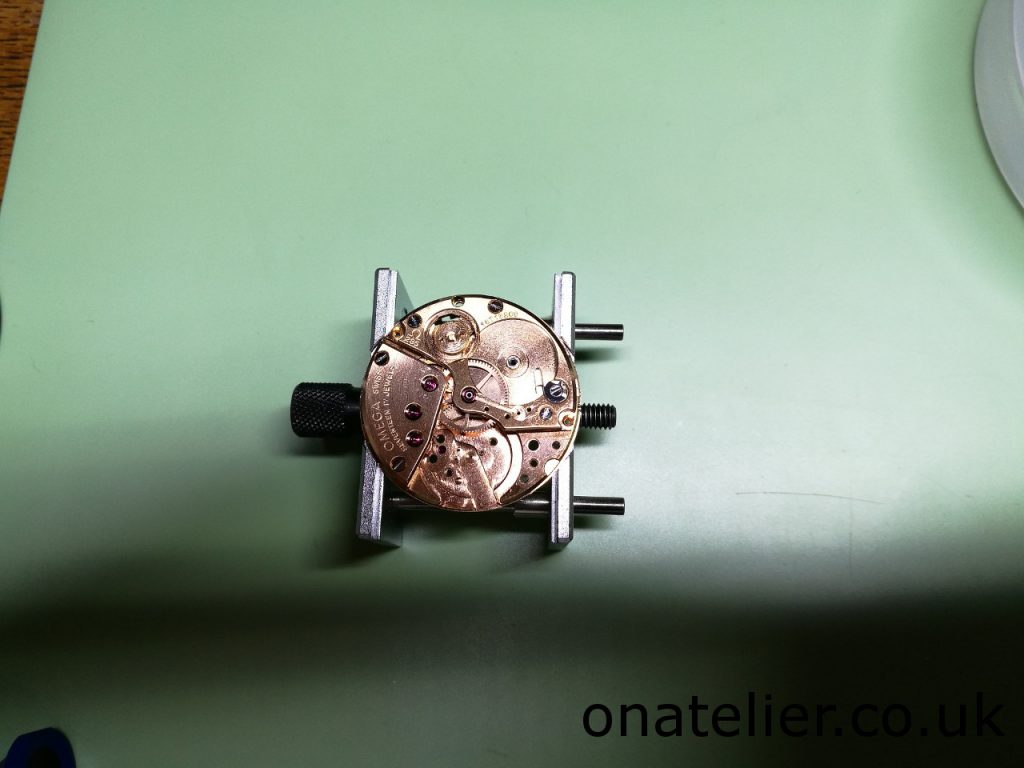 Fast forwarding a few steps here, I now have the movement re-assembled. During inspection of the parts prior to rebuild I had noticed some light wear on the centre wheel bushing and centre wheel. The centre wheel is obsolete, so I was keen to see how the movement would run as is before deciding on the next course of action. During testing, the watch had good and stable timekeeping, and consistently went beyond the specification for power reserve, so we are all good here. 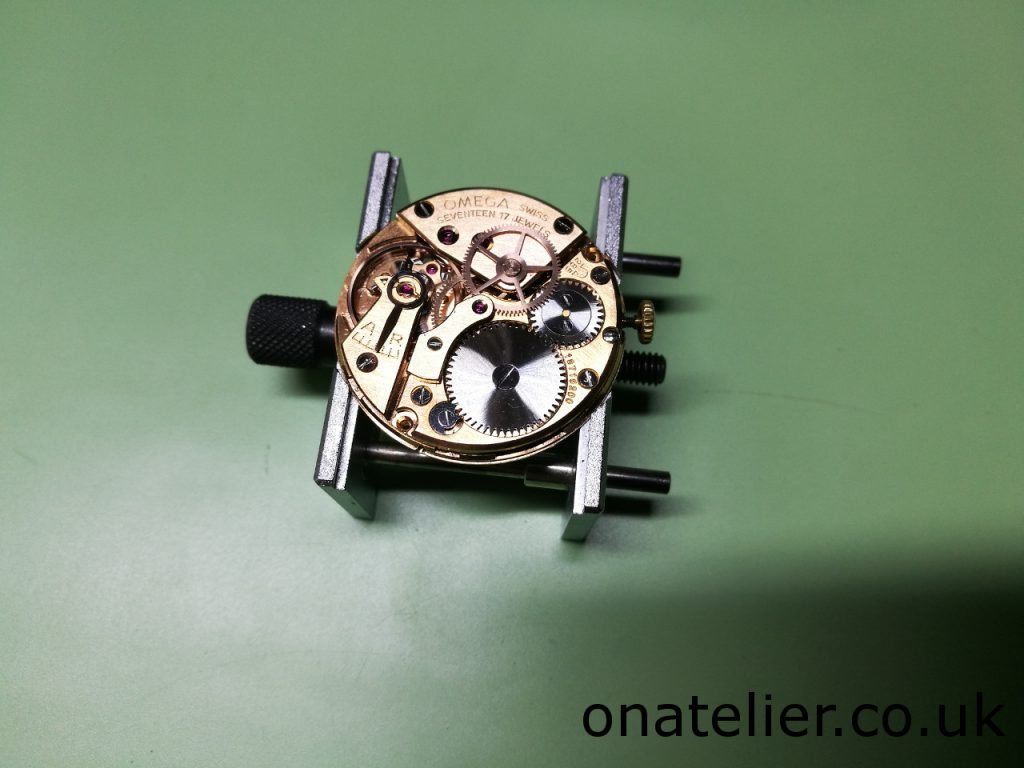 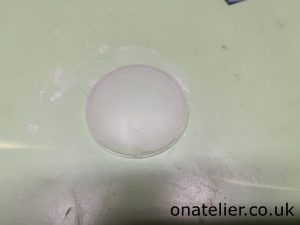 With the movement work out of the way, I now focus on the cosmetics. I start by polishing the acrylic crystal.

David and I discussed the options for polishing, and we went for a sympathetic restoration here. We are not trying to make the case look new but just a very light polish to take the tarnish which dulls the colour of gold over the years. The right decision I think, as the watch looks great after the light polish whilst keeping its character. 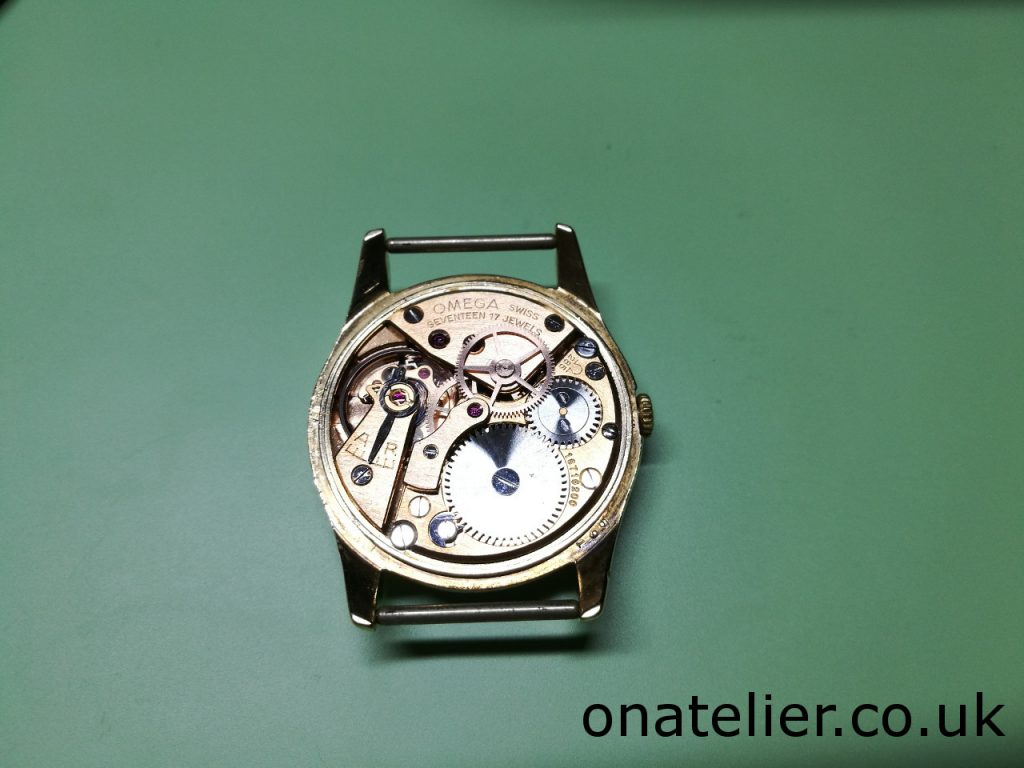 I thought I was done at this point, but it is only during testing that I notice that the sweep second is very lightly rubbing against the crystal. The hand stack is very tight indeed on this watch, so it was not an easy task to make the hands clear each other, the dial, markers, and the crystal. I fitted a new crystal, and found that although a similar profile to the original (both low domes), it offered a welcome additional minute amount of clearance for the seconds hand. I am playing within the hundredth of a millimetre order of magnitude here… 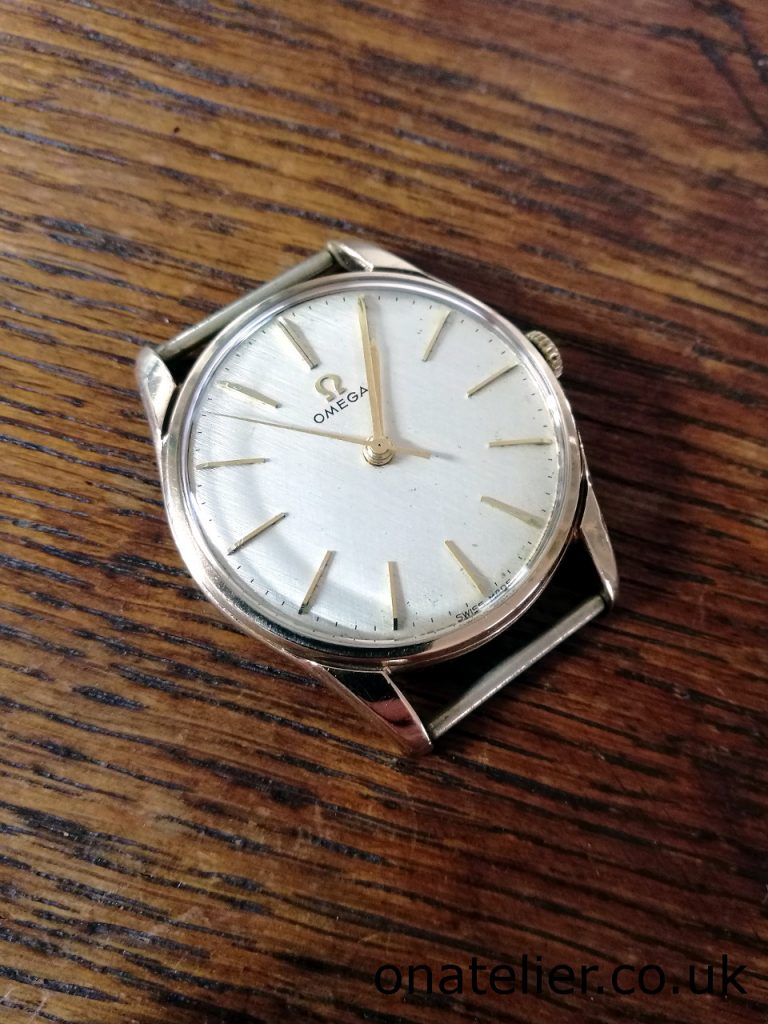 With this resolved, I tested the watch again over a couple of days, and all was fine.

Finally I sourced and fitted a new leather strap for David which finishes the watch very nicely. It is now ready to be worn again and enjoyed. And best of all during that time David managed to find the original buckle to go with it!

That dial… I let the picture do the talking. 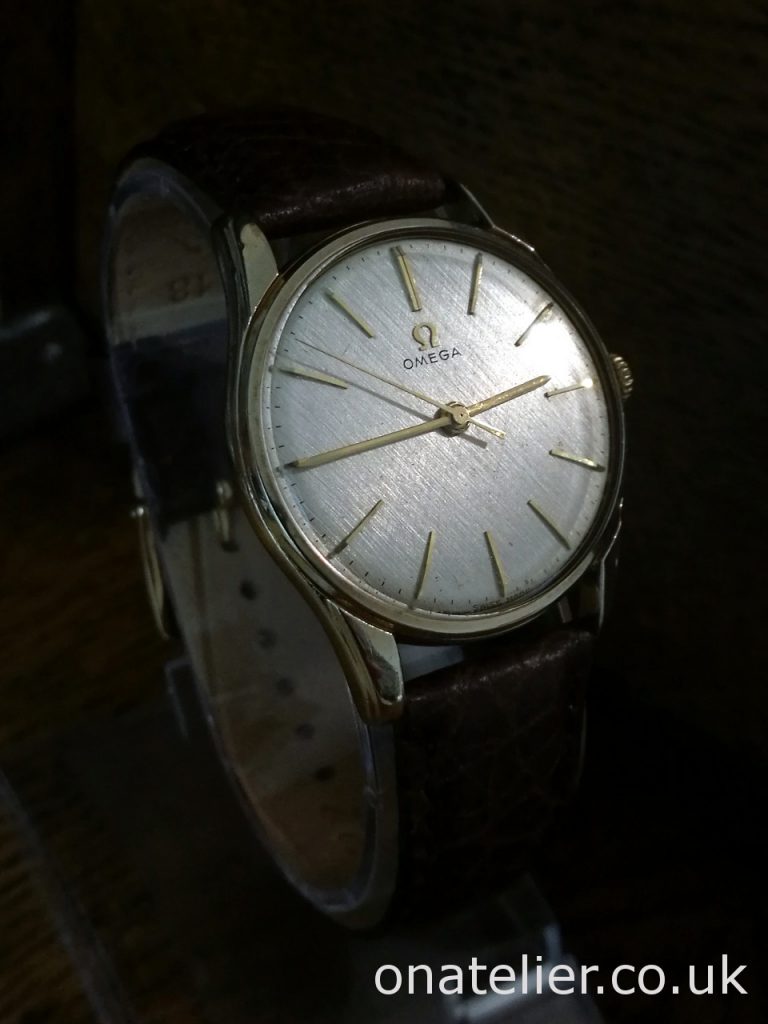 I would like to conclude this article by wholeheartedly thanking David for entrusting me with a watch which has great significance to him. I love watches and appreciate them for their intrinsic beauty, but the best watches by far are the ones with memories attached to them, people places and circumstances. A great watch on all accounts.