Another vintage Omega on the blog. Today I am featuring this beautiful Constellation model dating from 1966. It is powered by the Omega Calibre 561, which is a very fine movement indeed. It is chronometer rated, meaning it was tested and certified to meet certain precision standards. It was adjusted in different temperatures and in 5 positions during production. 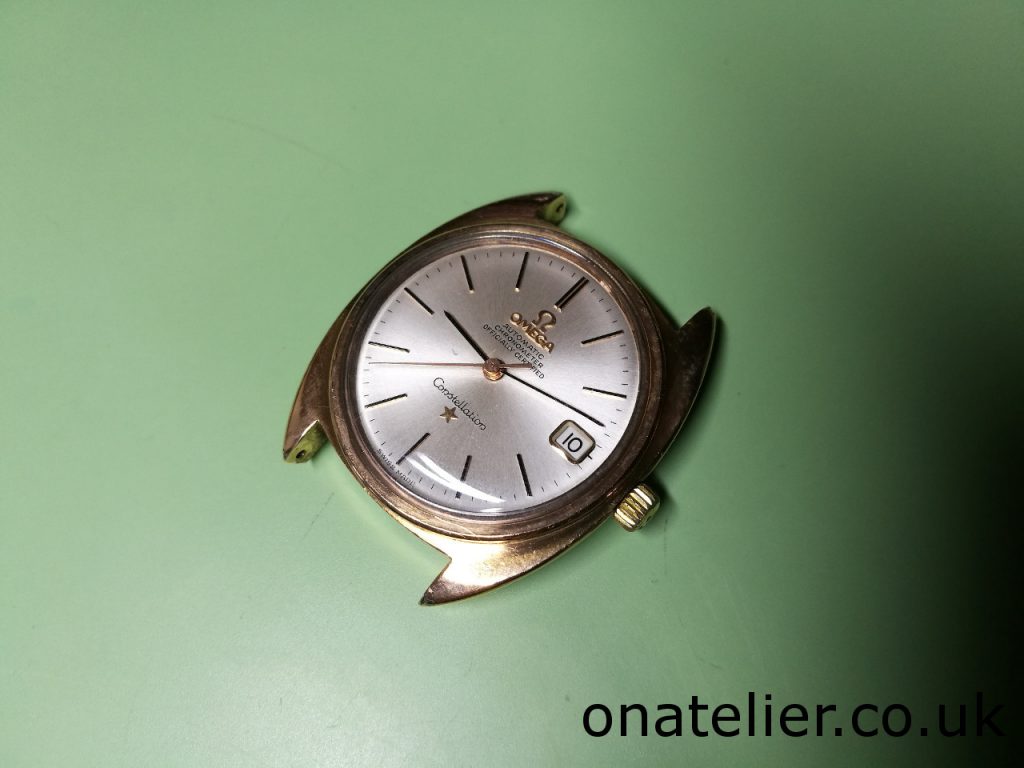 Nowadays the chonometer rating in Switzerland is delivered by Contrôle Officiel Suisse des Chronomètres (COSC). However this watch predates the foundation of the COSC, and would have been tested after production by the “Independent bureaux officiels de contrôle de la marche des montres” in Switzerland. Interestingly, the standard at the time was different to today’s, however both are a gauge of quality and accuracy for the timepiece.

The watch is in good cosmetic condition, but as I tested it prior to the service, I noticed that, whilst the timekeeping looked reasonably good on the timegrapher, the time displayed on the watch was out by several minutes a day. This is a typical sign of a slipping cannon pinion, so I will look at this as part of the service. 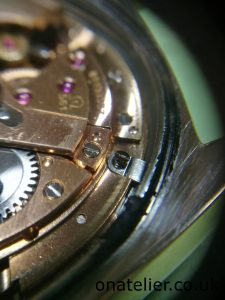 After opening the case I am greeted by the typical gooey caseback gasket, sign of a watch which has not received any care for some time: these gaskets take a very long time to liquefy in that fashion.

I clean up the gooey mess, and take a closer look at the Calibre 561. The typical rhodium plating of Omegas of that era is a little bit dirty, but everything looks to be in order. 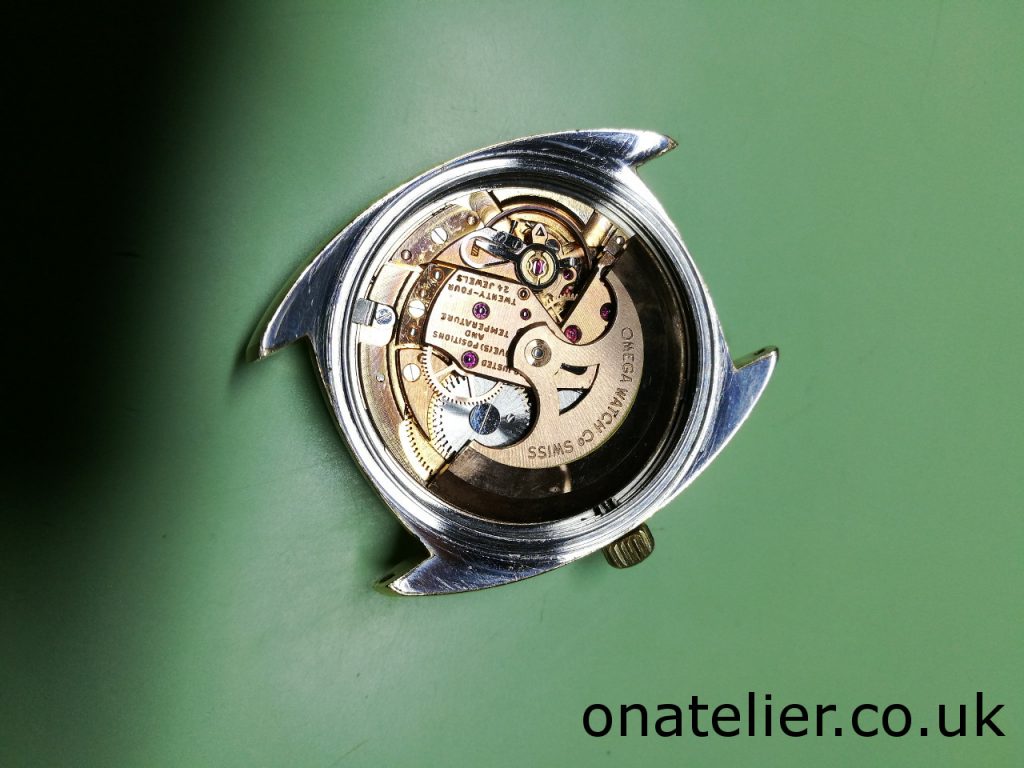 I start by removing the automatic works. 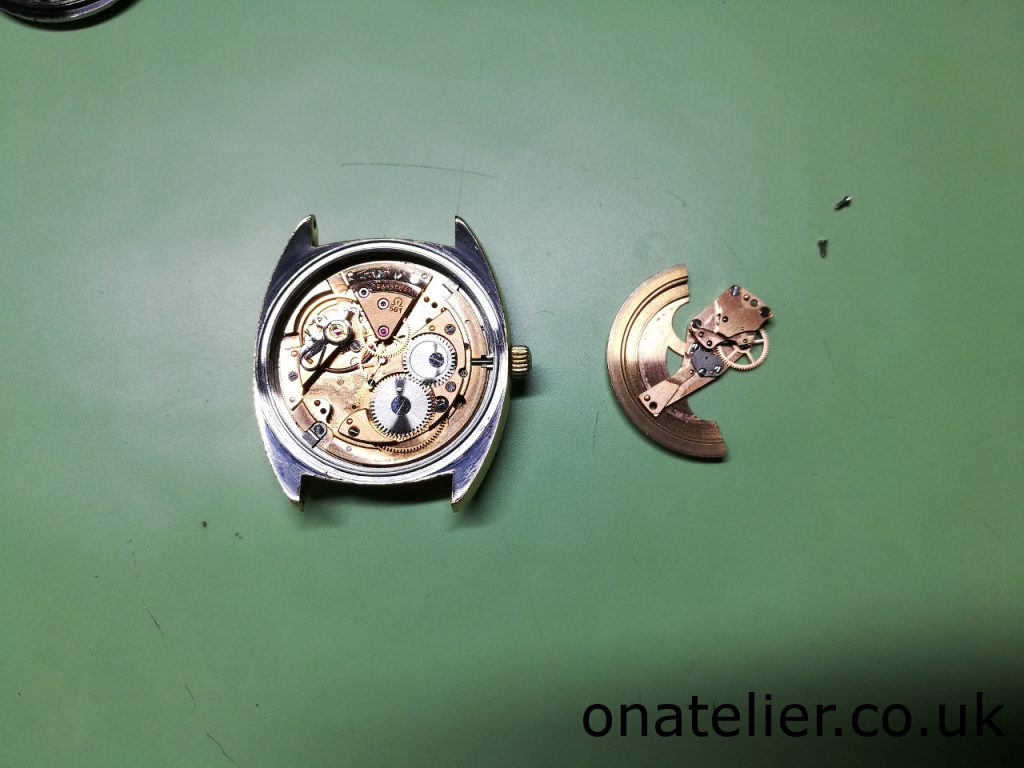 The automatic works is stripped down. 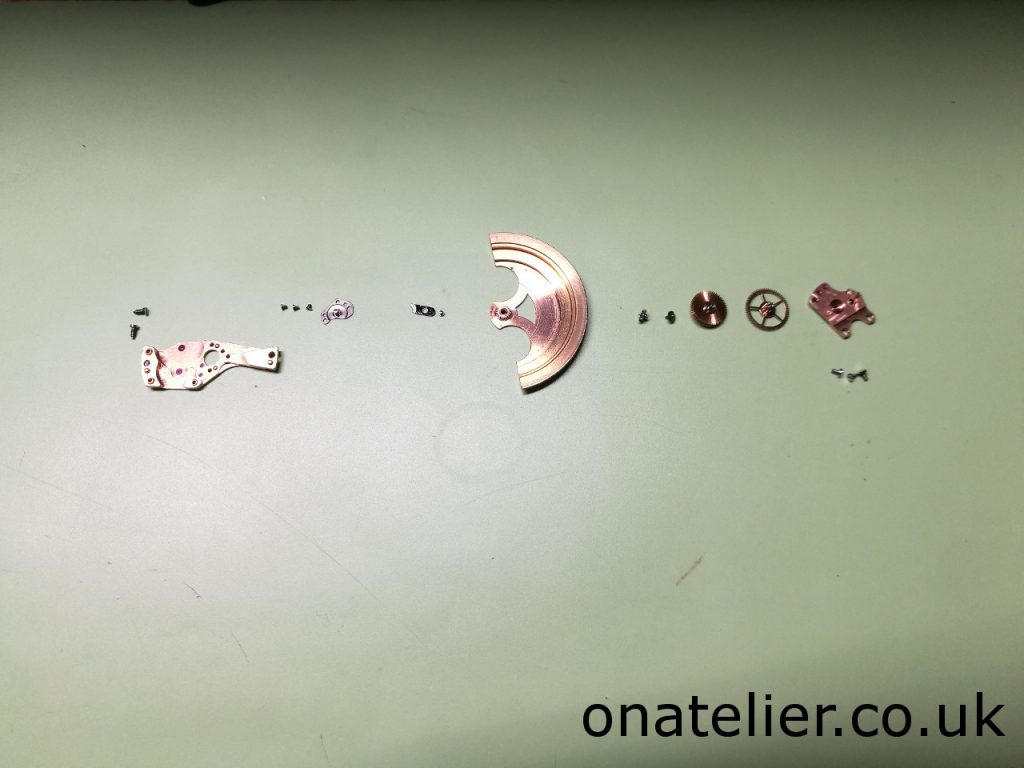 This includes the reversing gear, which is a different design to conventional reversers. It should not go fully assembled in the ultrasonic cleaner, as cleaning fluid would get trapped inside. It also needs careful lubrication, which can only be done once the unit is stripped down, unlike an ETA type reverser which is a lot easier to work with! 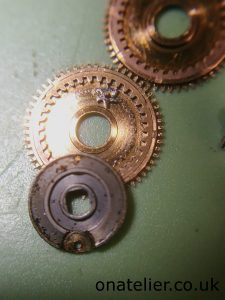 As you can see, it was very dirty indeed.

I move on to the dial side of the movement, I start by removing dial and hands. The dial is stunning, the photo below does not do it justice, the sunburst finish looks fantastic. 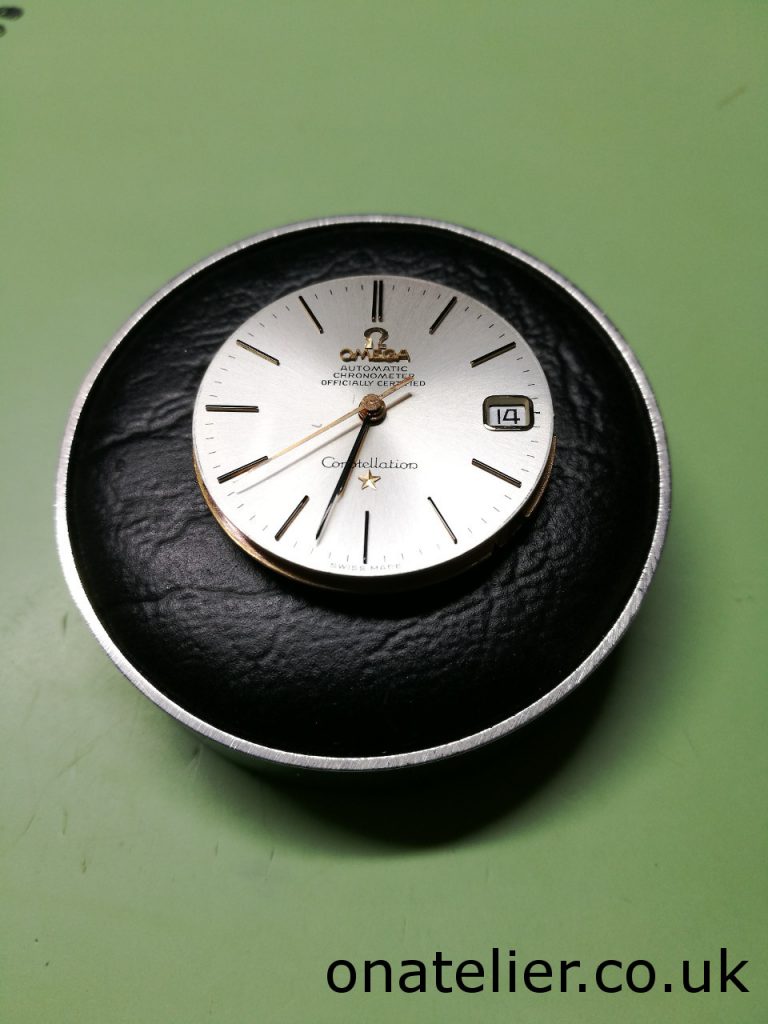 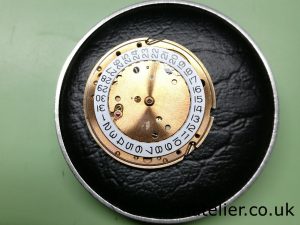 This is what the movement looks like immediately under the dial.

I remove the date indicator guard, exposing more of the bottom plate side of the movement. 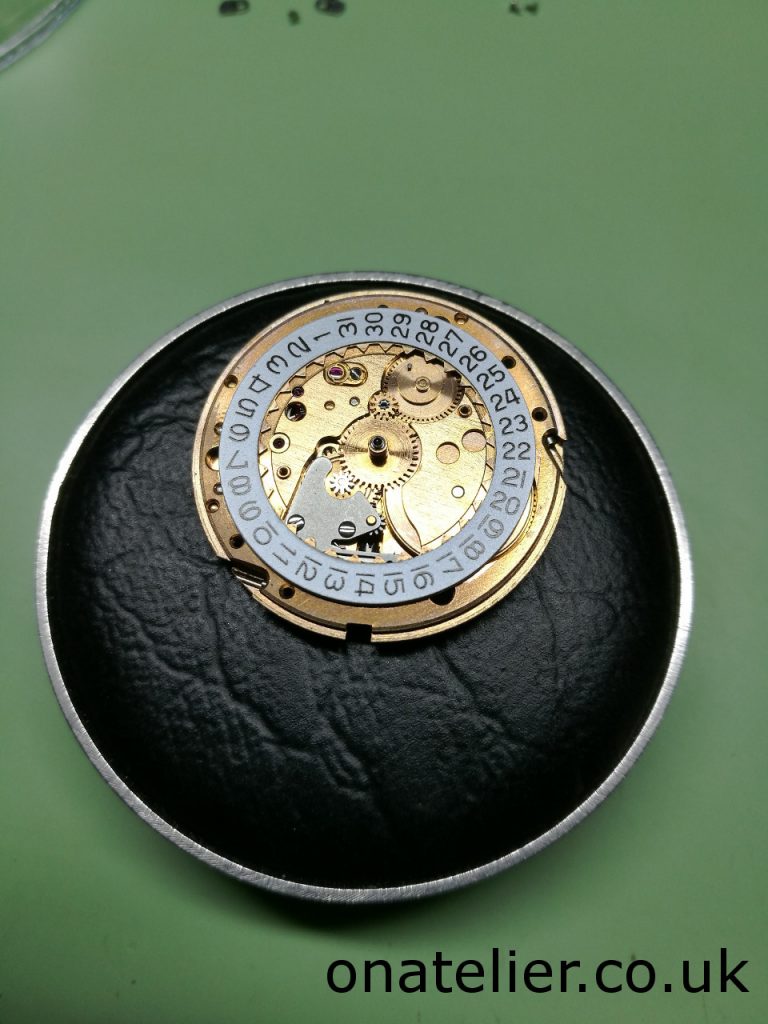 Here is a good view on the keyless work and the cannon pinion. I can tell that the cannon pinion is too loose, it must be slipping when the watch is running. This explains the timekeeping issue I observed earlier.  It is a friction fit around the centre wheel arbour, and the fit has to  be just right. Too much and the time setting will not feel right, not enough and the pinion will lose its grip when the watch is running.

I will adjust the fit later after cleaning of the parts. 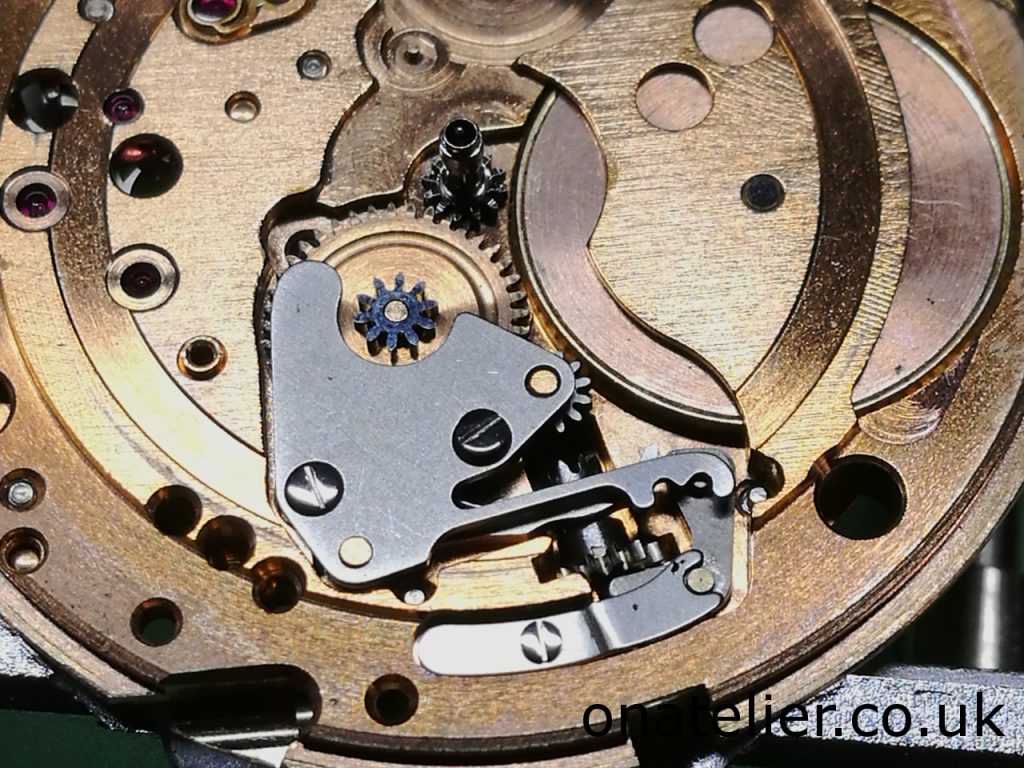 This is the dial side fully stripped down. 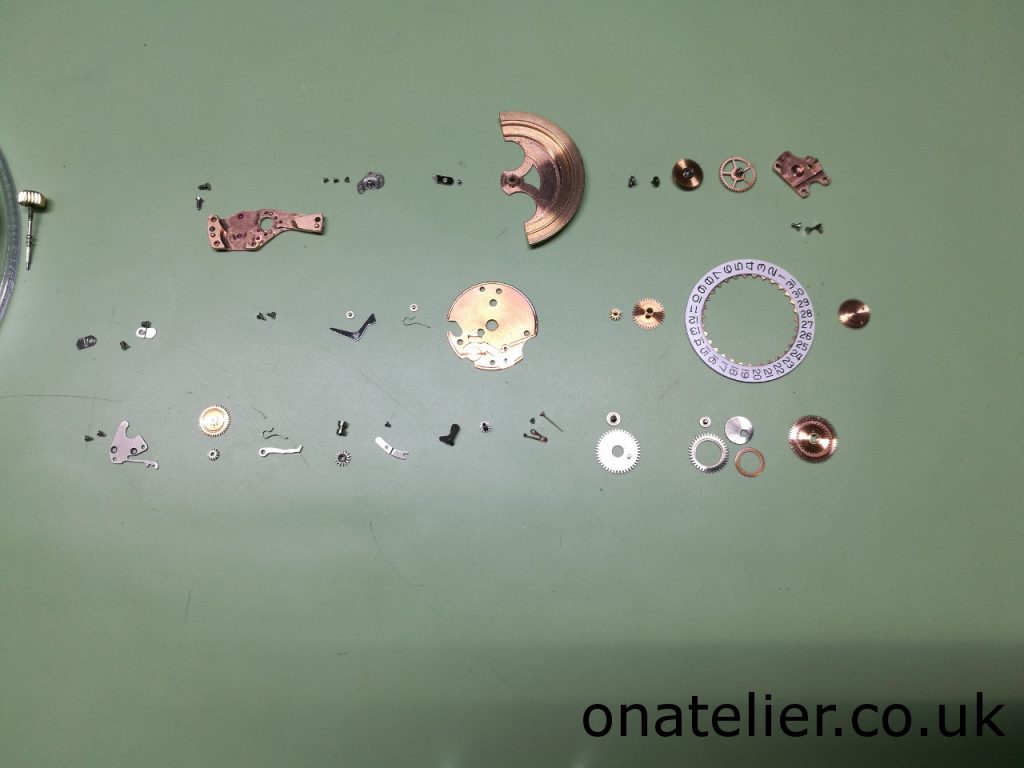 I move on to the upper side of the movement. Crown wheel and ratchet wheel are removed. 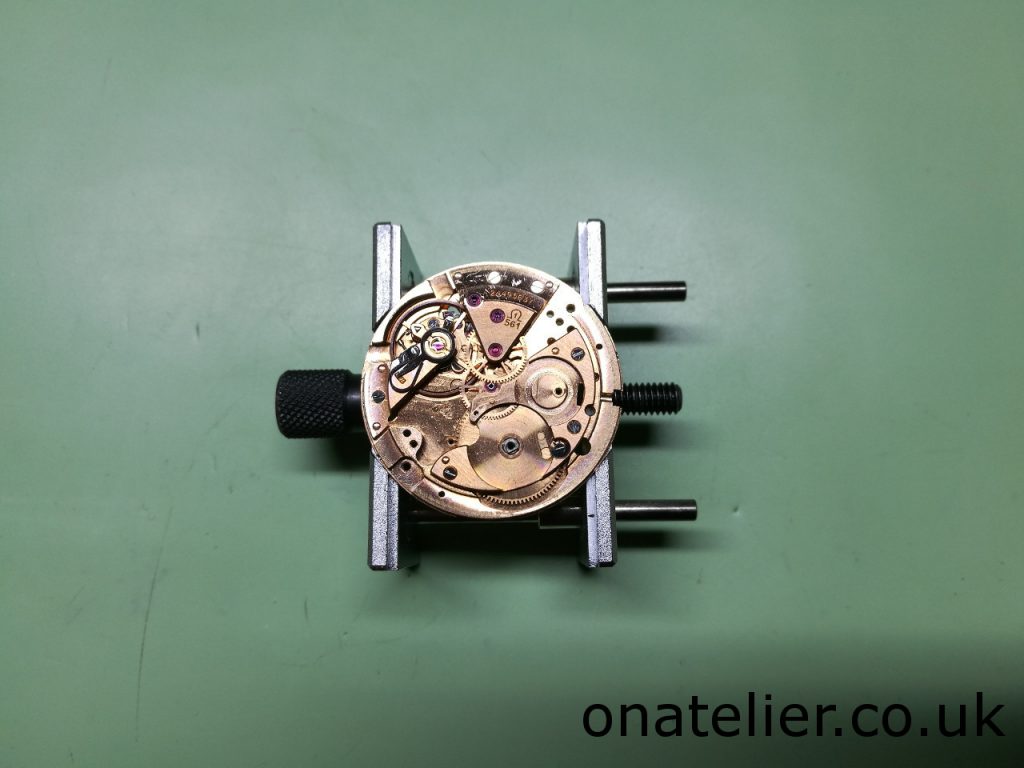 Train bridge is taken out, exposing the train wheels. 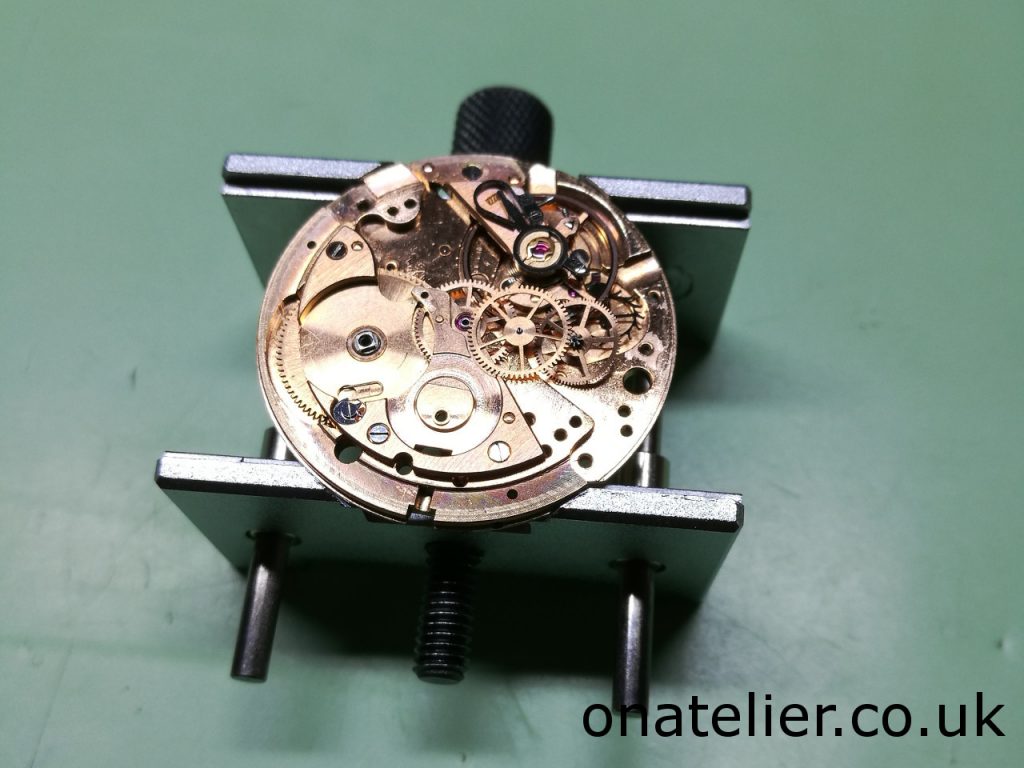 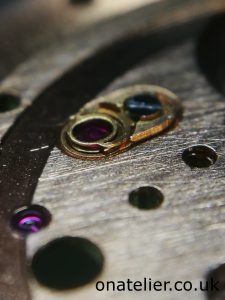 A close up on the unusual shock protection spring, which can be found on several Omega calibres of that era. The other side is the more common Incabloc spring.

The movement is now fully stripped down. 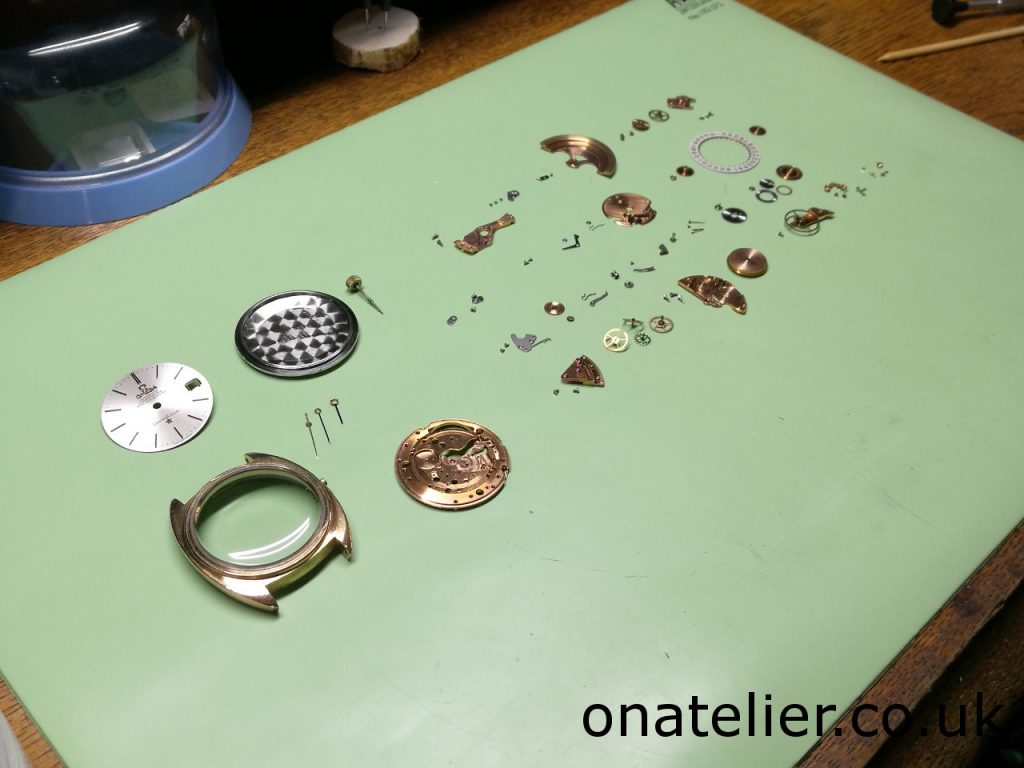 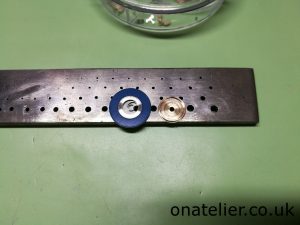 After ultrasonic clean of the parts, I start assembly with the mainspring, as usual.

Train and winding mechanism are installed. 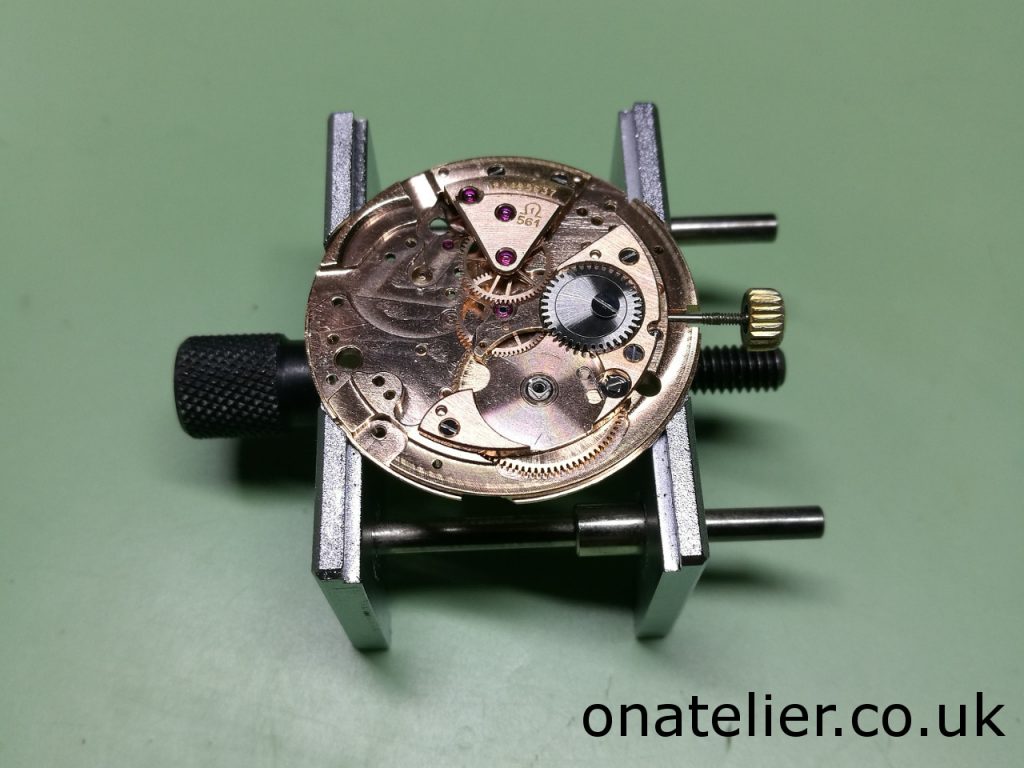 I now need to address the slipping cannon pinion issue. I use the lanterning punch on my staking set. Notice that I am using a brass tapered pin to fill the cannon pinion, to ensure it does not collapse as I am tightening it. It is quite a delicate operation. 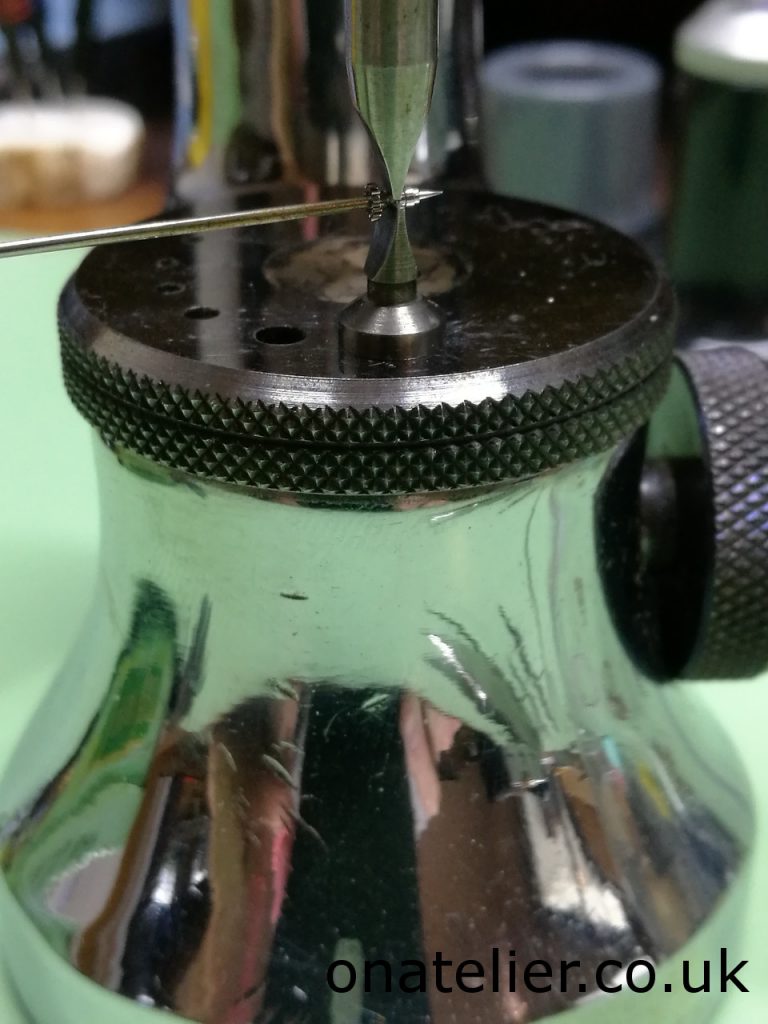 I complete the assembly of the movement, and fit the dial and hands. The sweep second pinion needs to be supported to fit the seconds hand. I am not a  huge fan of this design. There is a friction spring rather than a bridge supporting the pinion, but it makes for a slimmer movement. 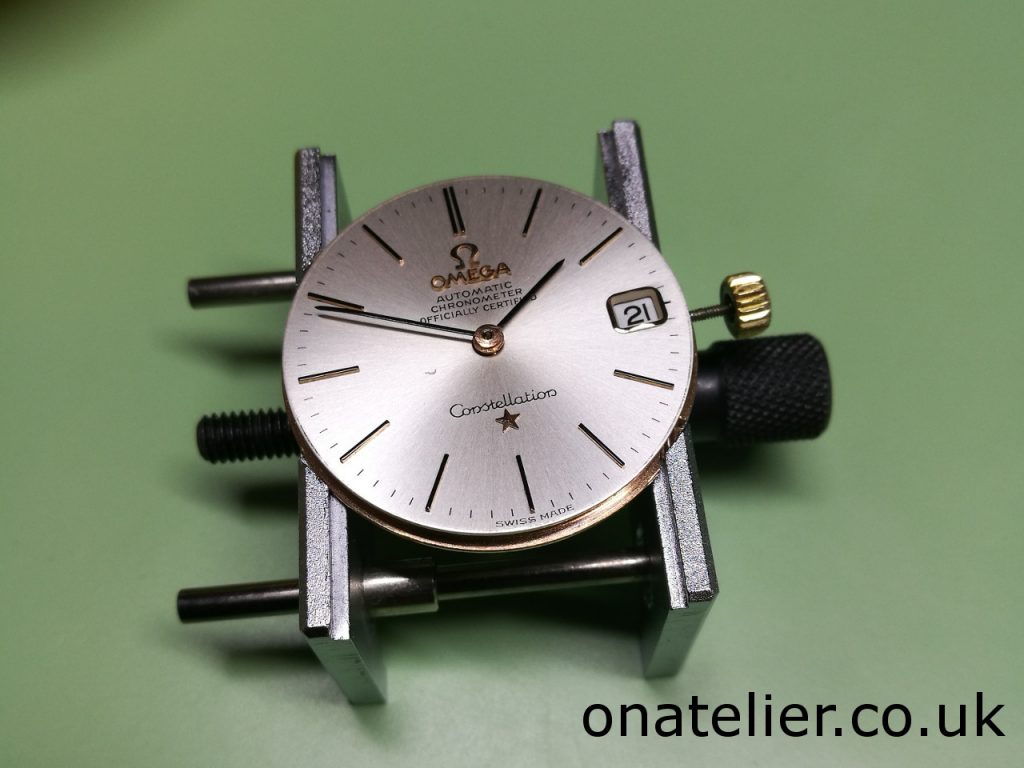 The movement fully assembled with friction spring fitted in the centre. 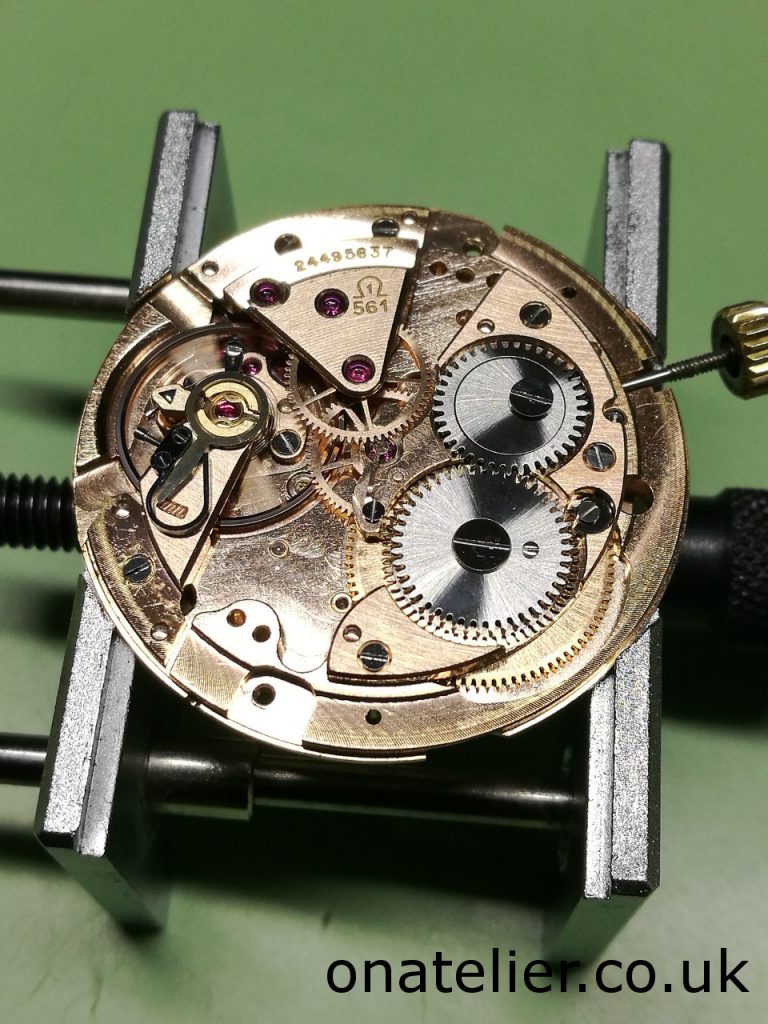 The movement is re-cased, and the automatic winding mechanism is installed. 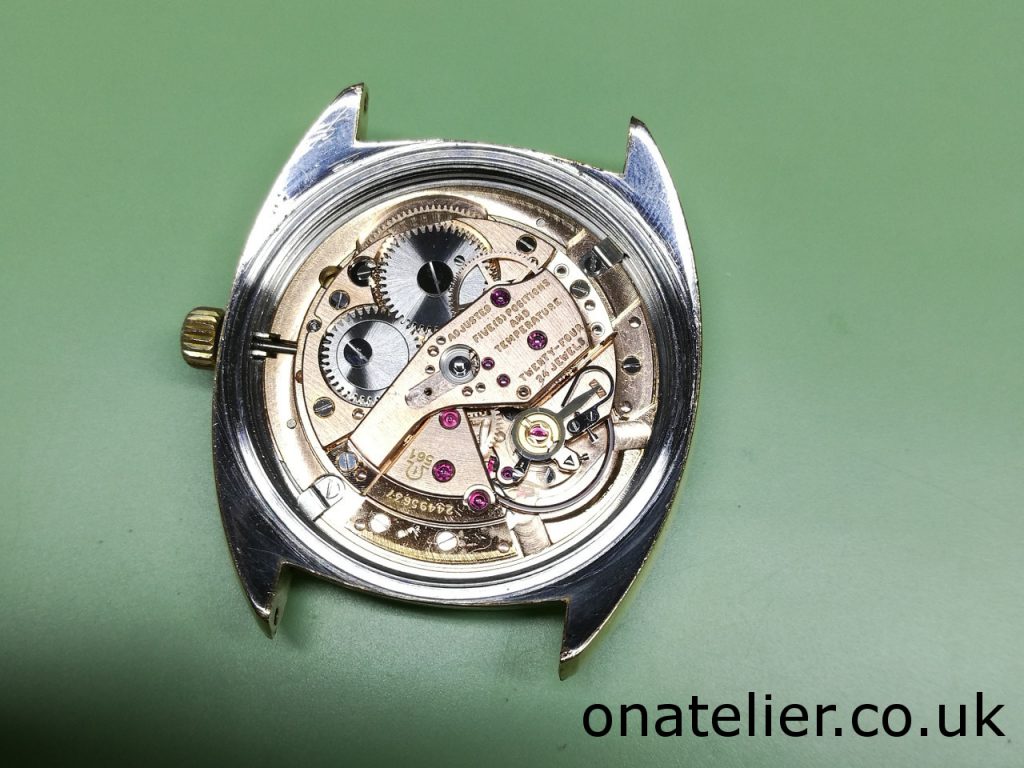 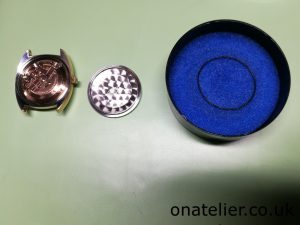 And finally, the oscillating weight is fitted, as well as a new gasket suitably lubricated

To finish this off, I fit a new leather strap with a gold Omega buckle, which makes for a beautiful watch. 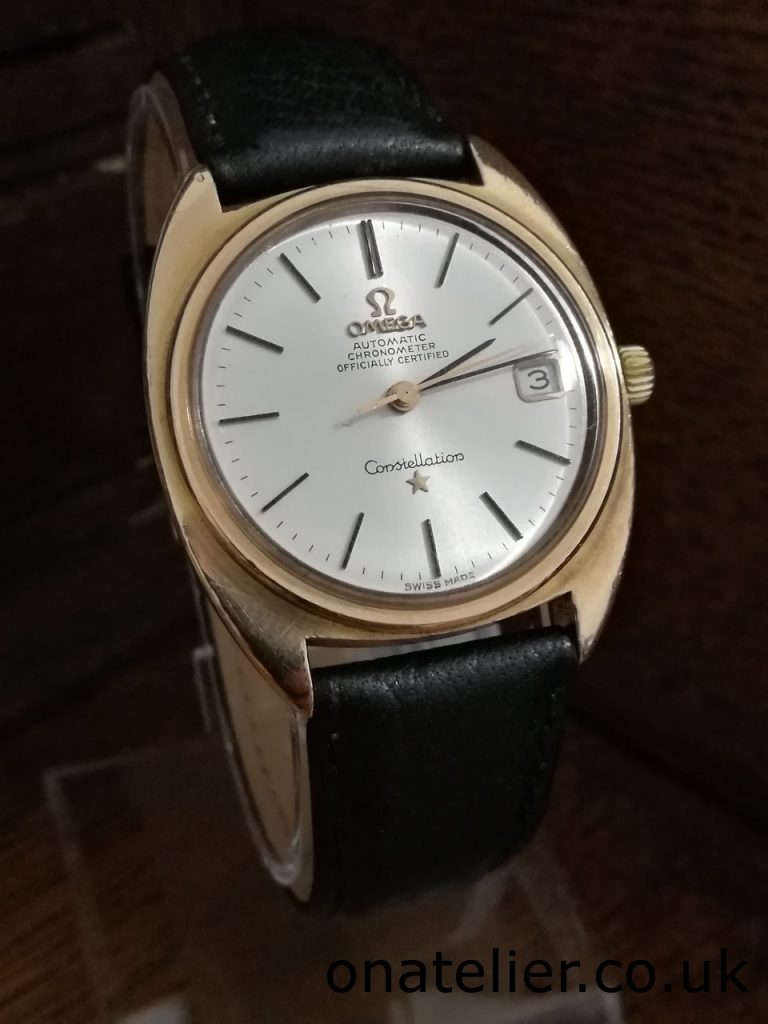