Following on from this post, Anthony sent me another watch for a service. Once again it is a watch with military influence:  a very nice Ollech & Wajs Chronograph. O & W is a Swiss watch company created in 1956, which specialises in  automatic and manual-wind mechanical military and dive watches. 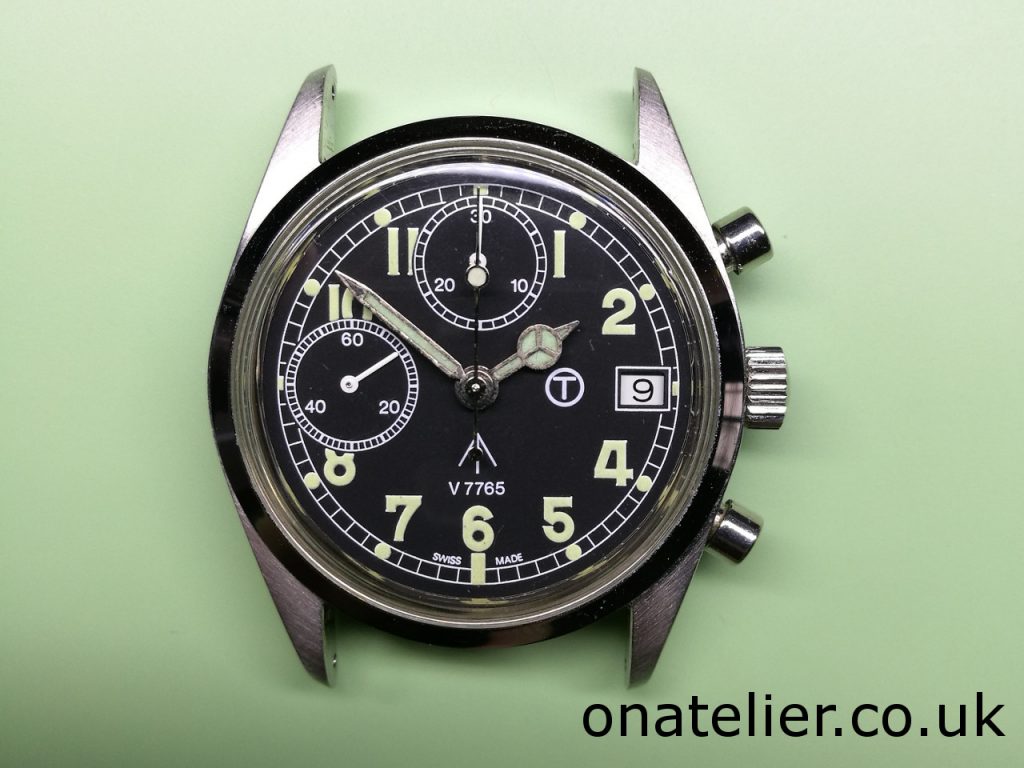 The watch is powered by a Valjoux 7765 movement. This movement shares some of its architecture with the more common Valjoux 7750, it is cam operated and the coupling mechanism is a tilting pinion type. However unlike its 7750 sibling,  the 7765 is a manual wind, and only has two sub-dials, unusually located at 9 and 12 o’clock. 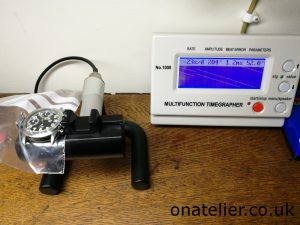 The timegrapher is showing that the watch is losing time, and, with an amplitude only just above 200deg, a service is in order.

The caseback is removed, revealing the Valjoux 7765 Calibre. 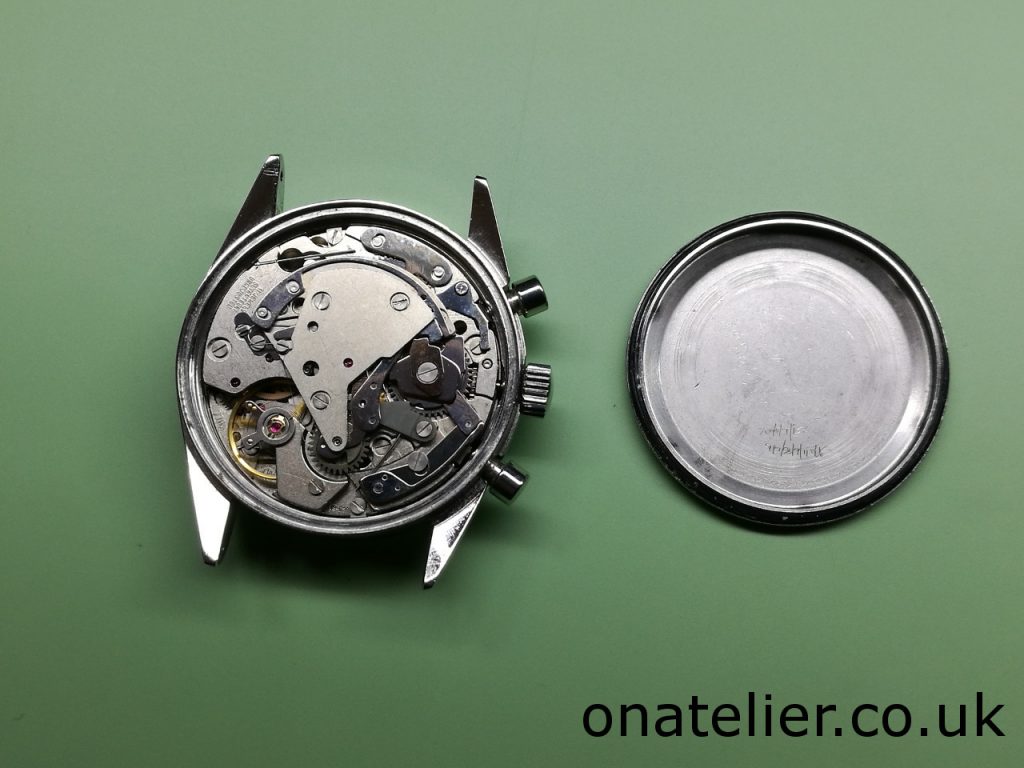 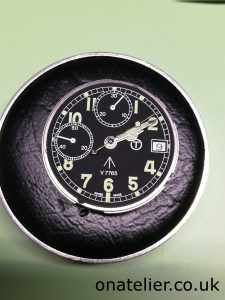 The movement is removed from the case.

I start disassembly from the dial side. 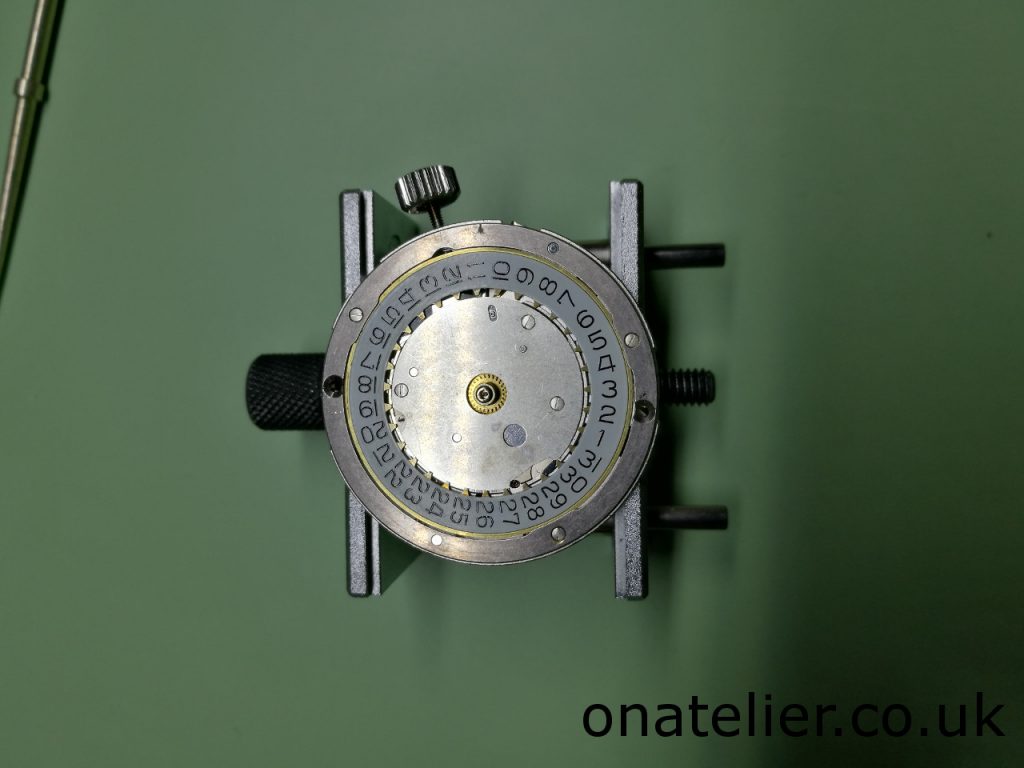 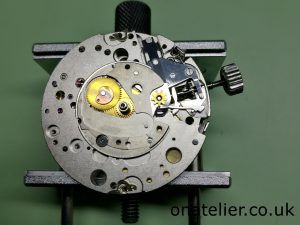 I then move on to the upper side of the movement. 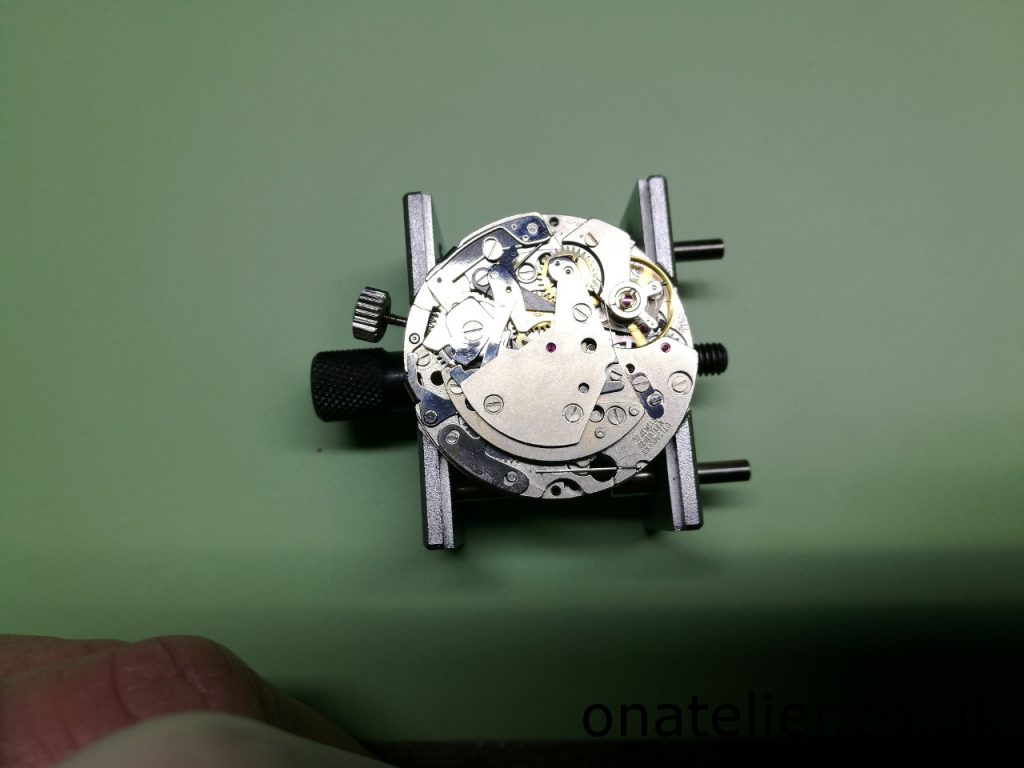 Starting by stripping the chronograph layer of the movement, I am then left with the main movement and the ratchet mechanism. 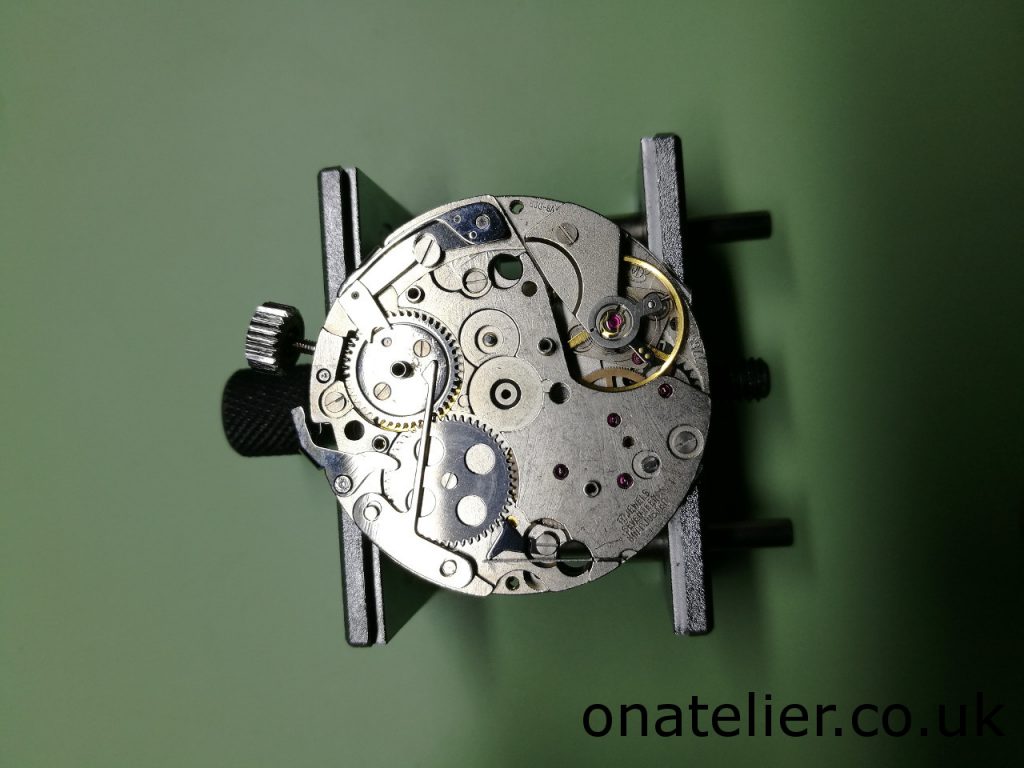 Some dry lubricant observed along the way. 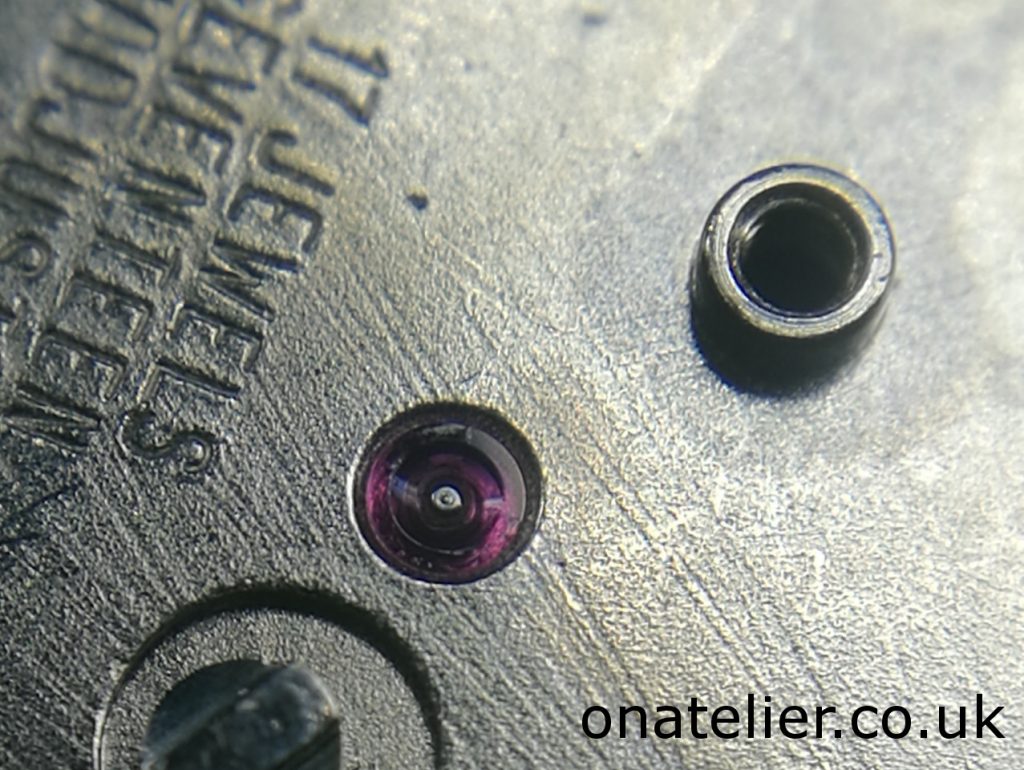 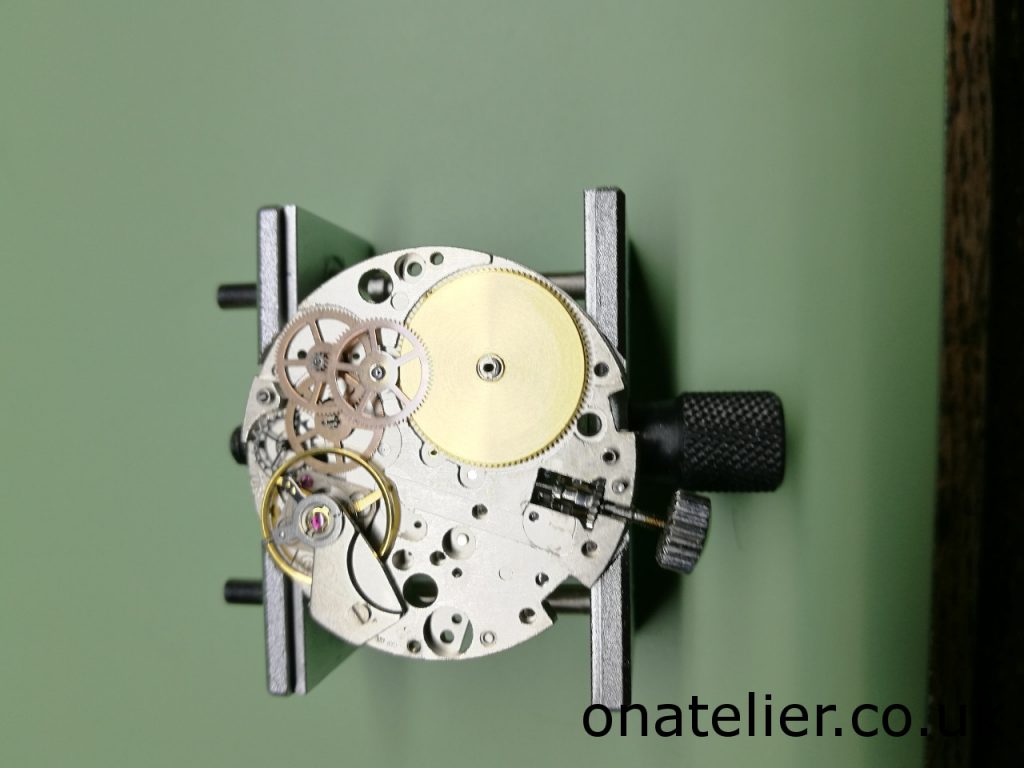 Disassembly was straightforward, with no notable issues or wear, apart from a screw head which split when unscrewing one of the train bridge screws, so this was duly replaced. 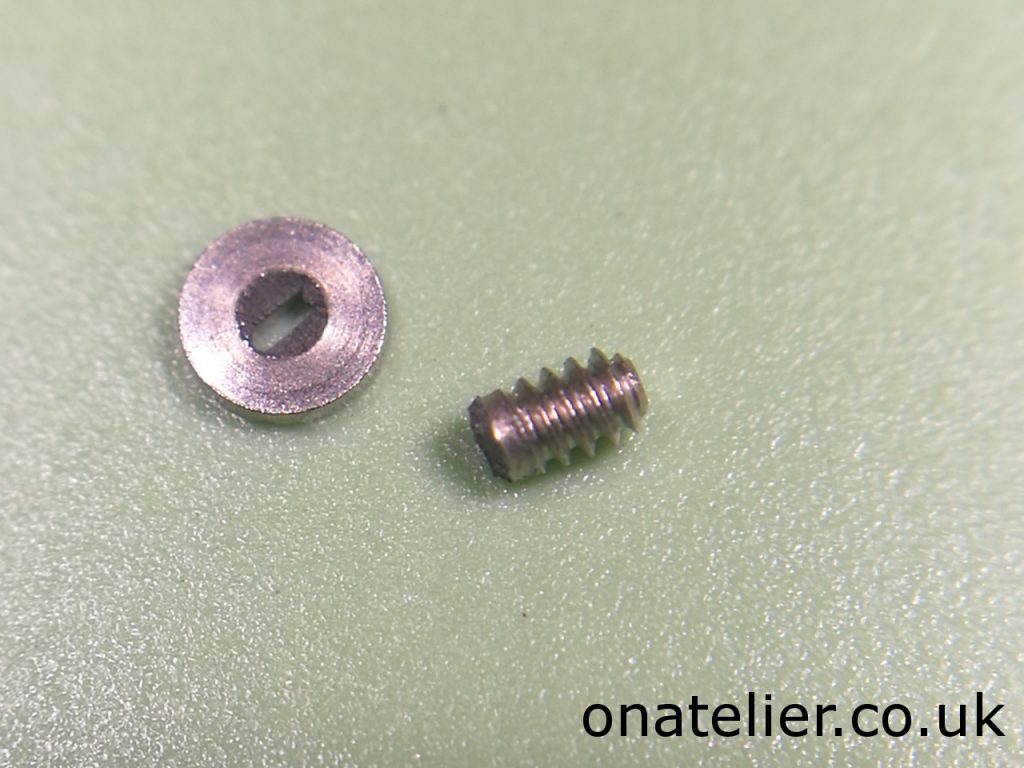 The whole movement stripped down: 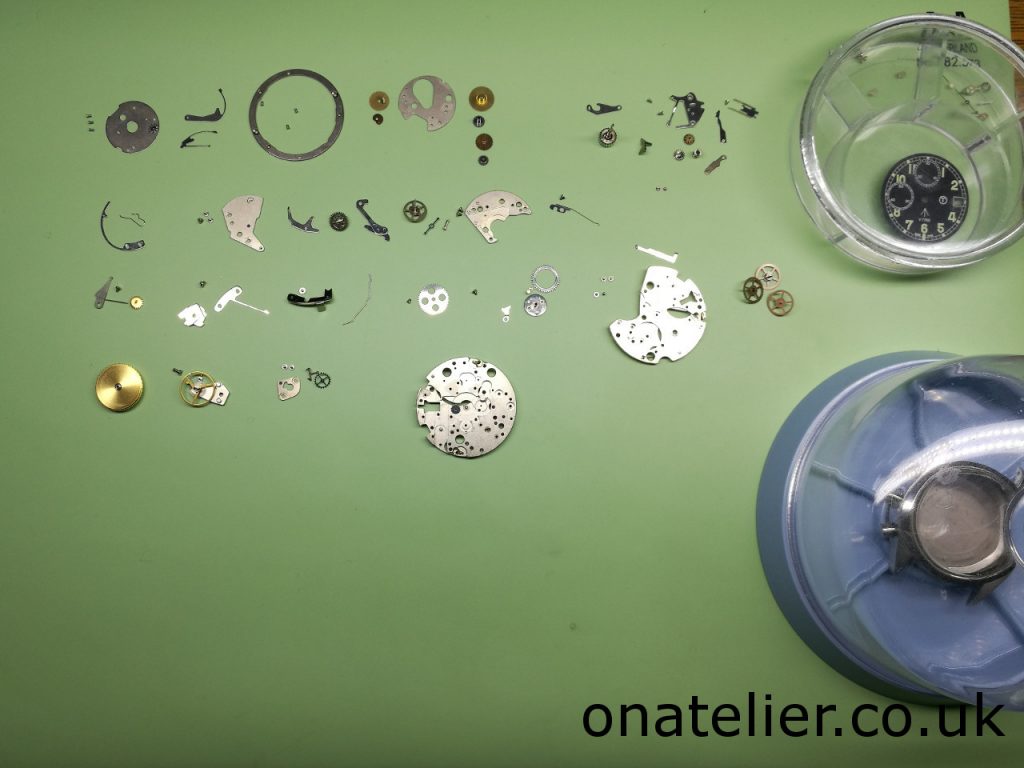 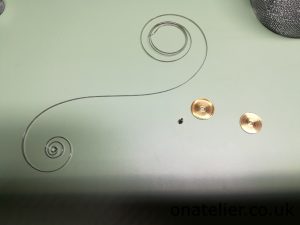 The old mainspring is taken out of the barrel.

All the parts after ultrasonic clean in the cleaning machine. All parts are inspected and found to be in good condition, ready for re-assembly. 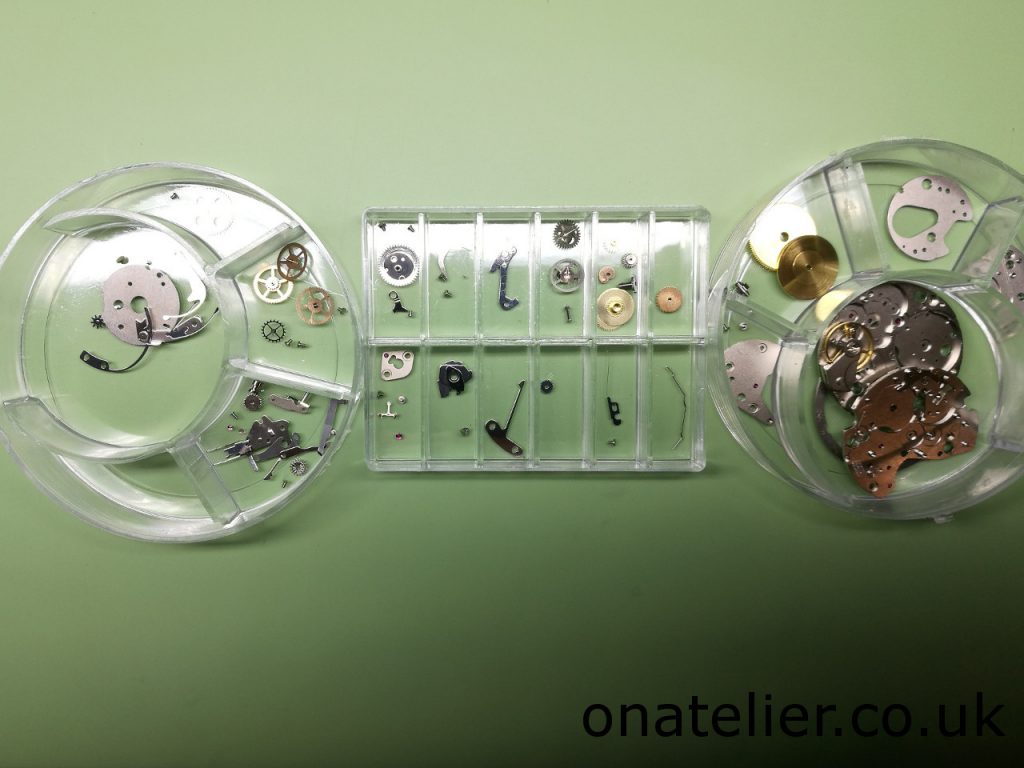 A new mainspring is fitted into the barrel. 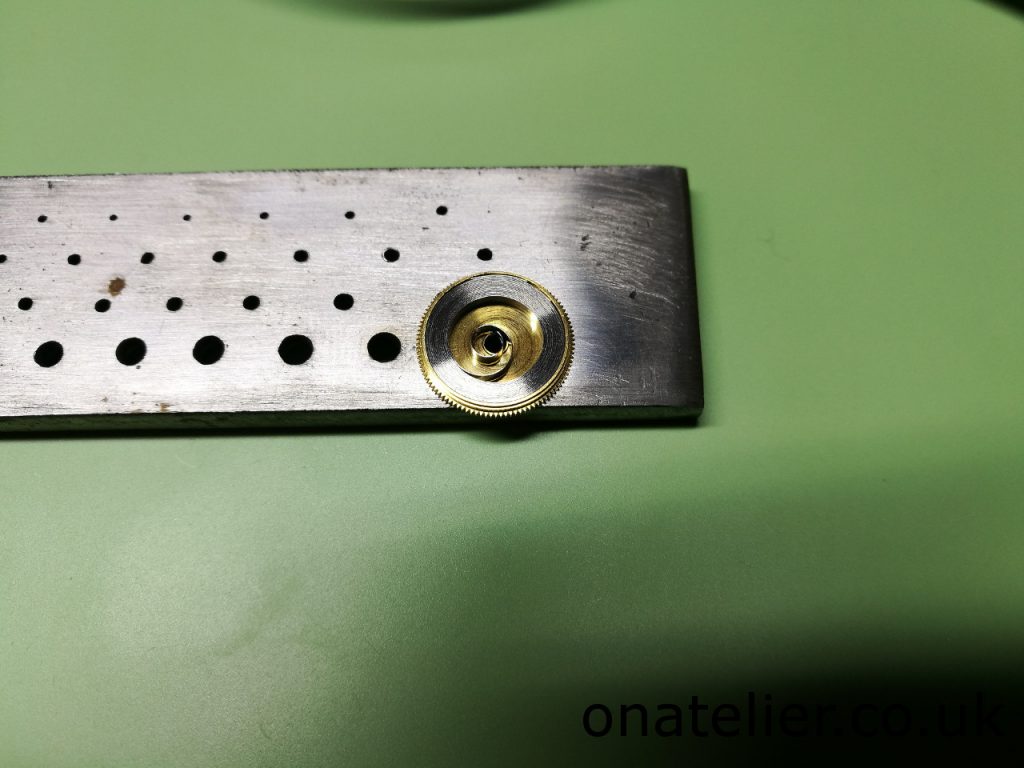 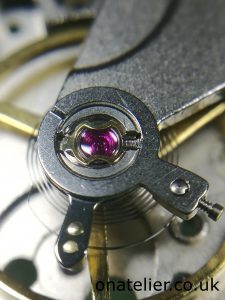 Balance end stones are lubricated on both sides. 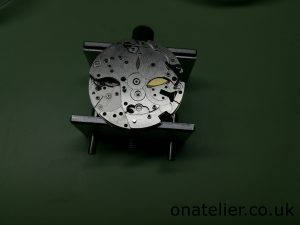 The main movement is re-assembled and lubricated, starting with the train wheels, barrel and train bridge. 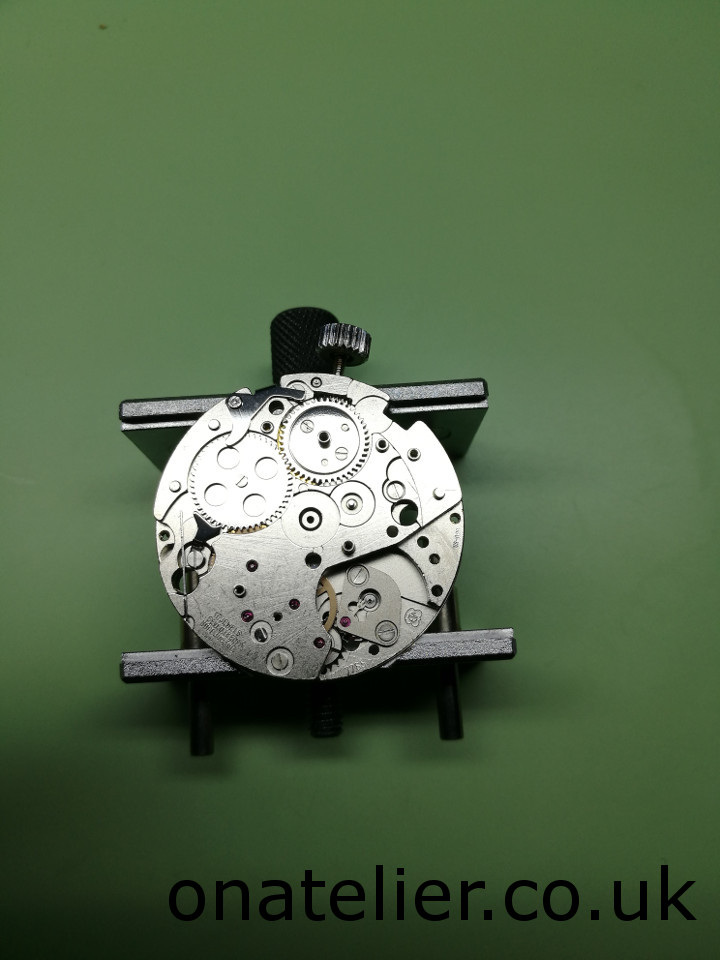 The chronograph layer is installed. Correct lubrication is critical, some of the parts in a chronograph are subject to tremendous forces and impacts. 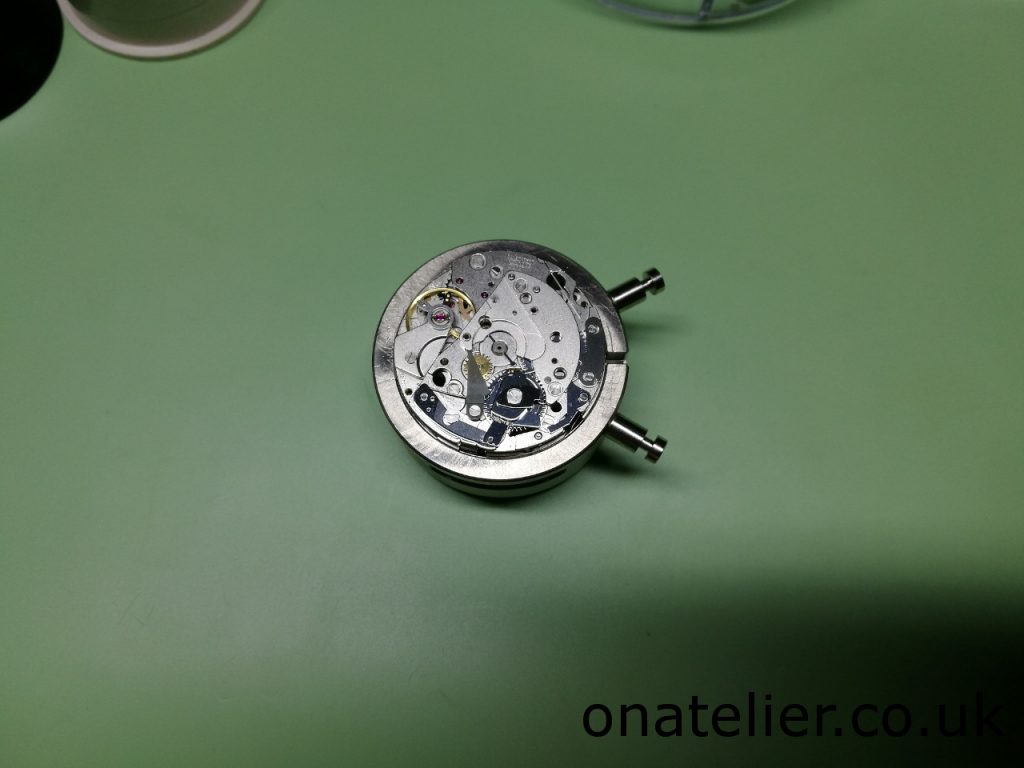 Finishing the upper side of the movement with the chronograph wheel bridge. 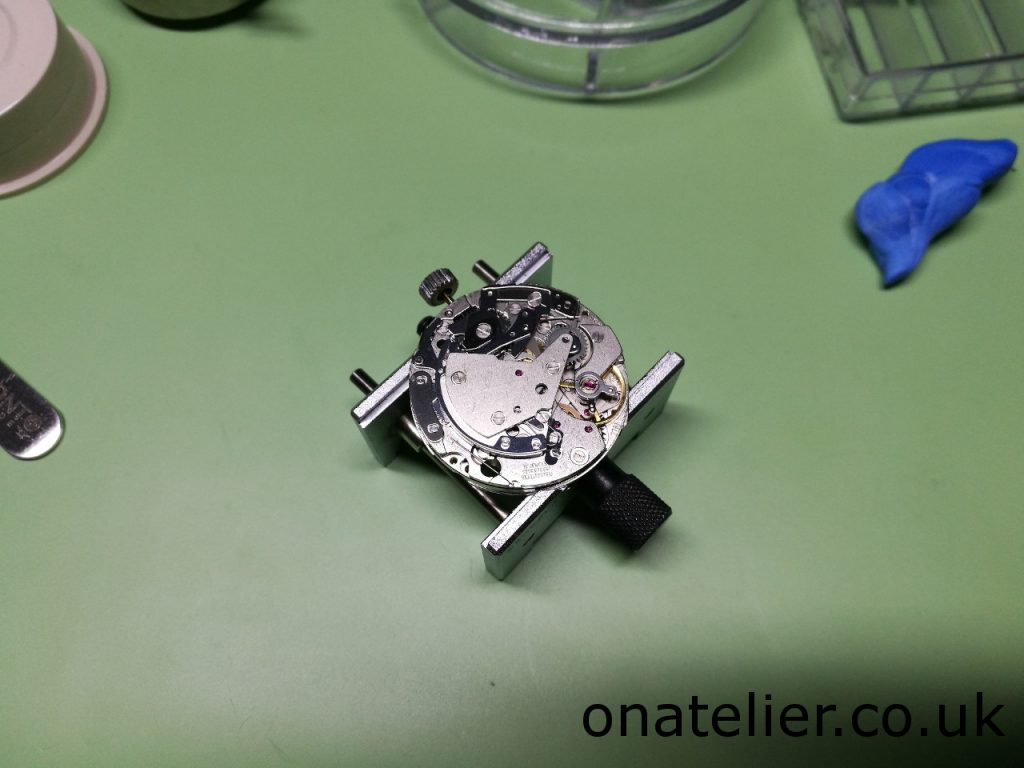 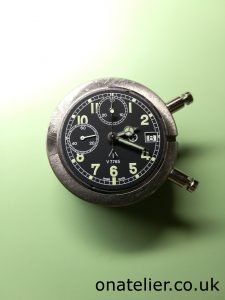 Dial and hands are fitted, and the chronograph mechanism is tested. The movement-specific holder makes the whole process much easier.

And finally the movement is re-cased, ready for final testing over a few days. The watch is now running very well, with excellent timekeeping, and amplitude is back where it should be, so the job is done. 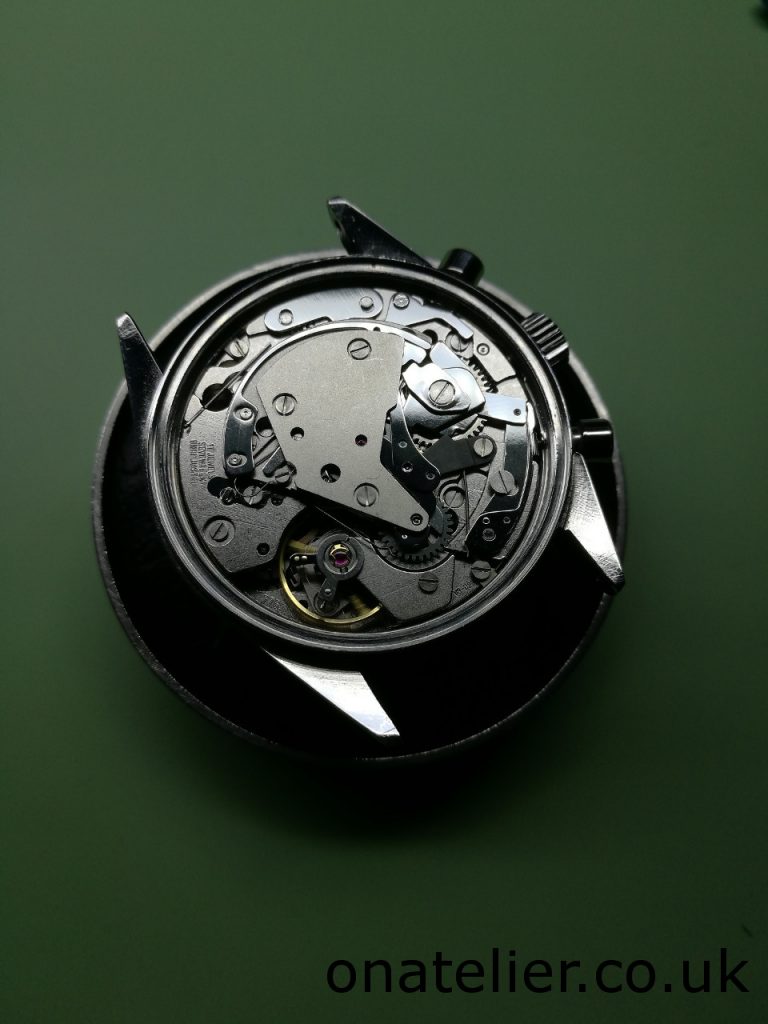 I would like conclude this article by sincerely thanking Anthony for sending me another one of his watches to work on and allowing me to feature it on the blog. Once again it was a pleasure.