Here is another British military watch on the blog, this time it is a CWC W10. I recently wrote about the “modern” CWC GS Automatic in this link .

The watch I am featuring today was the original issued watch which inspired the above. It was issued to the British troops from 1976 onwards. This particular watch was issued in 1980, which happens to be the last year of production for this model.

The watch is powered by the manual wind ETA 2750 movement, and has the optional hacking feature. This was required under the specification of the Ministry Of Defence. It is easy to understand the benefit of a hacking function: allowing the troops to synchronise their watches is fundamental for carrying out coordinated actions in the field. 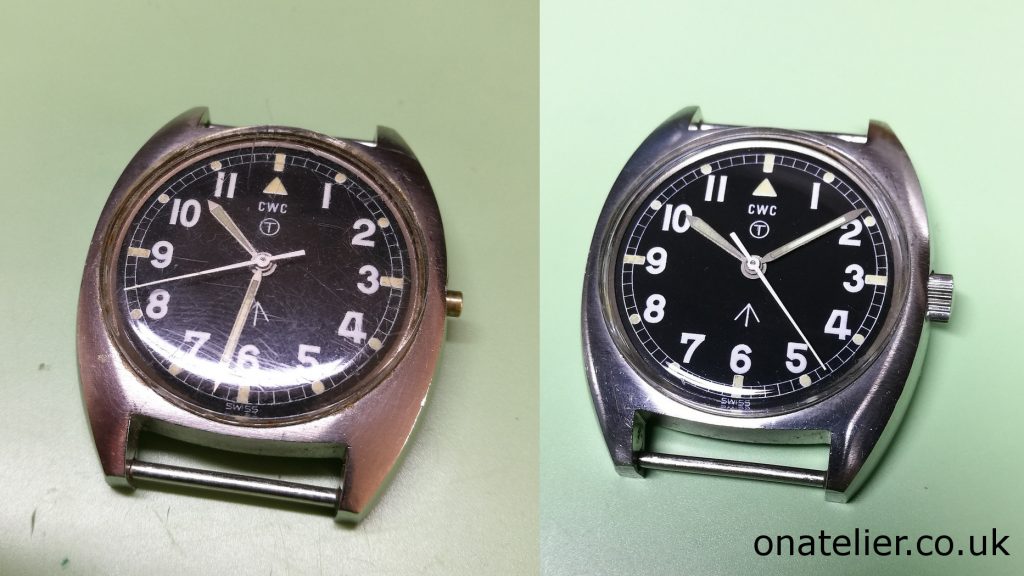 This watch clearly had a tough life as you would expect from a military watch. It was missing its crown, and definitely showed its age. 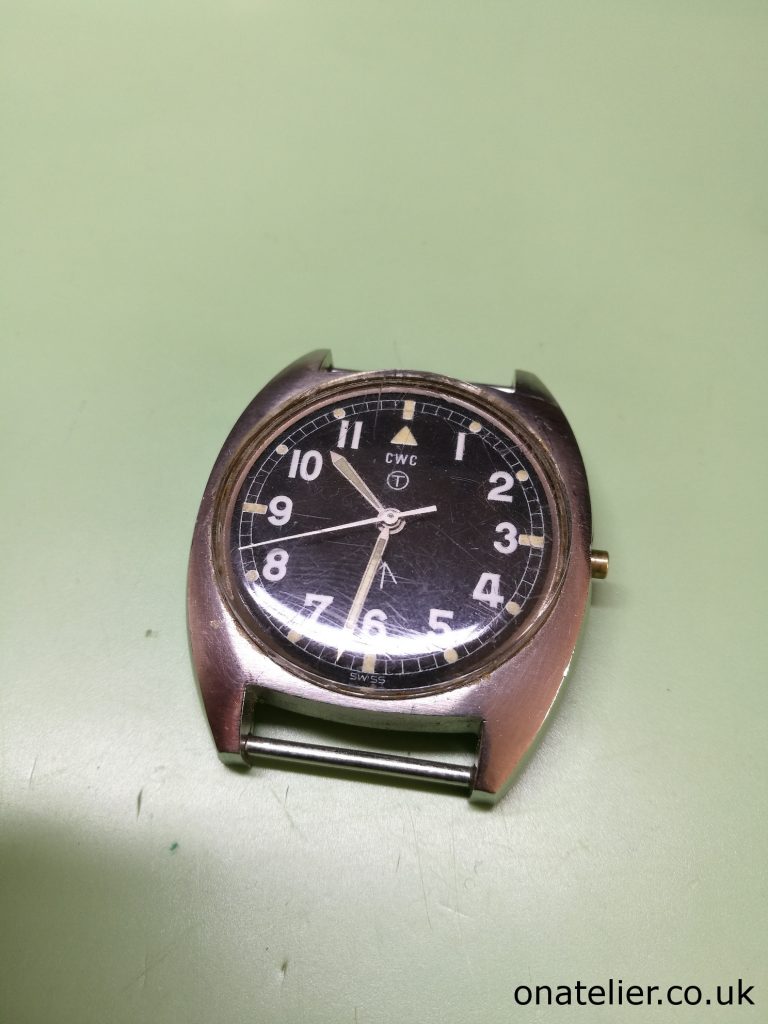 I start by de-casing the movement. The case is a monocoque design, so there is no removable caseback. It is excellent from an integrity point of view, but it means that the movement has to come out from the front, after removal of the crystal.

Straight away it becomes apparent that there is an issue with the crown wheel, which just drops out. On the plus side, the dial and hands are in truly beautiful condition, which is what really matters, as I can take care of the mechanics. 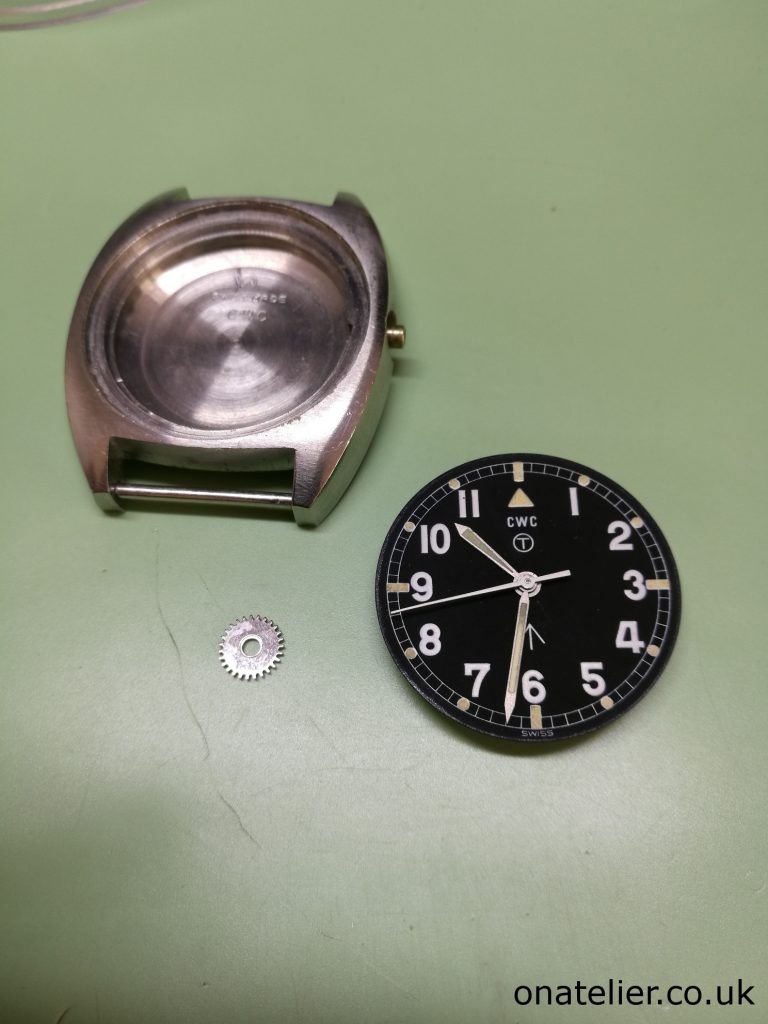 At this stage I also notice that there is no stop lever, so the movement is not complete, and the watch will not “hack”. The end of the stop lever should be present under the barrel bridge. I will source another one as I wish to return this watch to its correct specification. 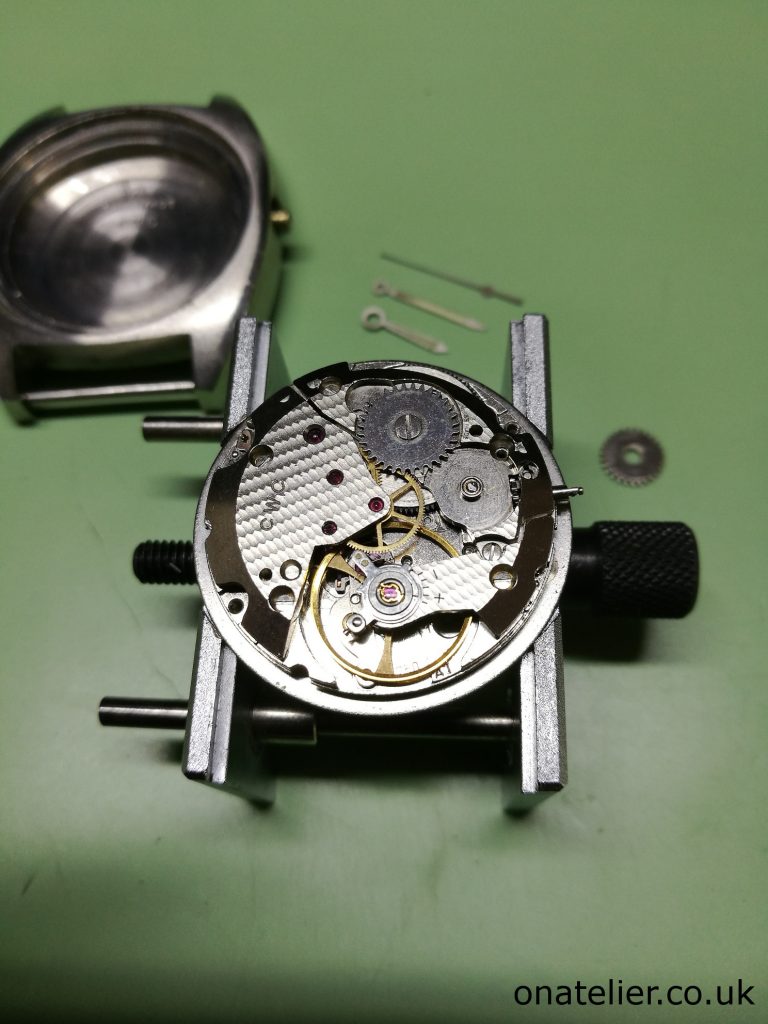 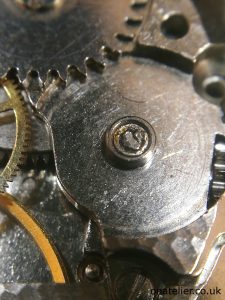 Here you can see that the screw of the crown wheel has sheared. You can even tell there has been an attempt at extracting it already, as a little groove has been cut in the screw.

My turn to have a go. Thankfully it did come out without too much drama. 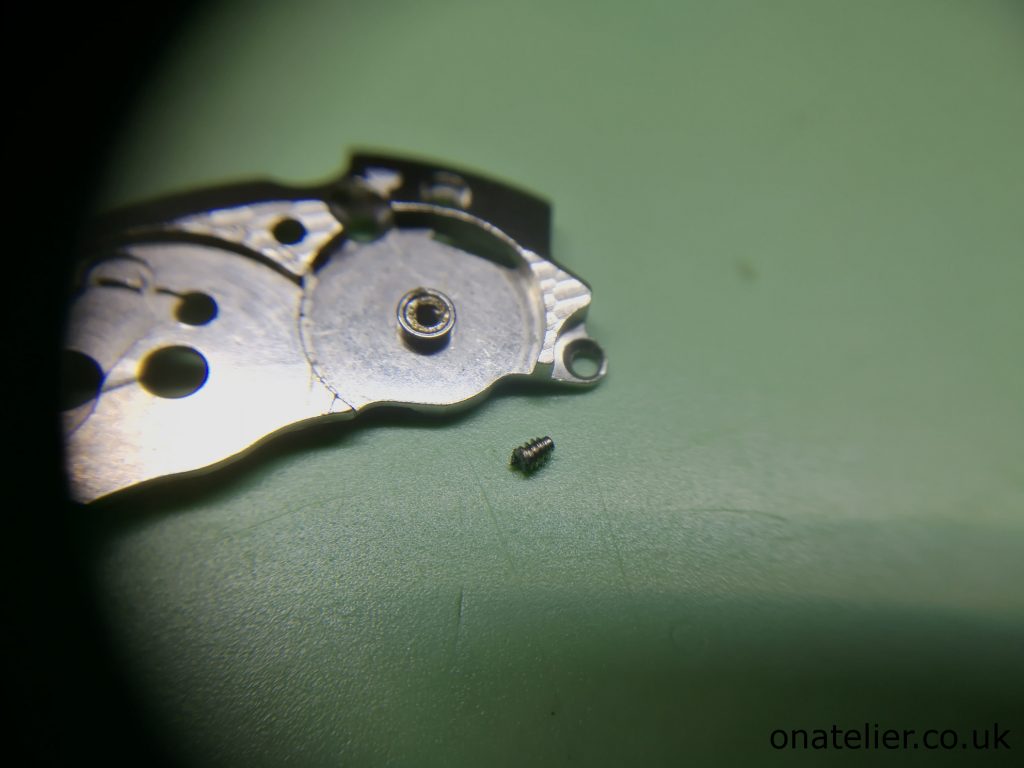 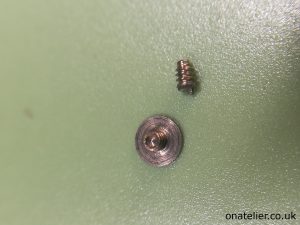 And I source another screw from my parts box.

I progress with the dial side of the movement. It is pretty straighforward as there is only motion work and keyless work here, no calendar complication. 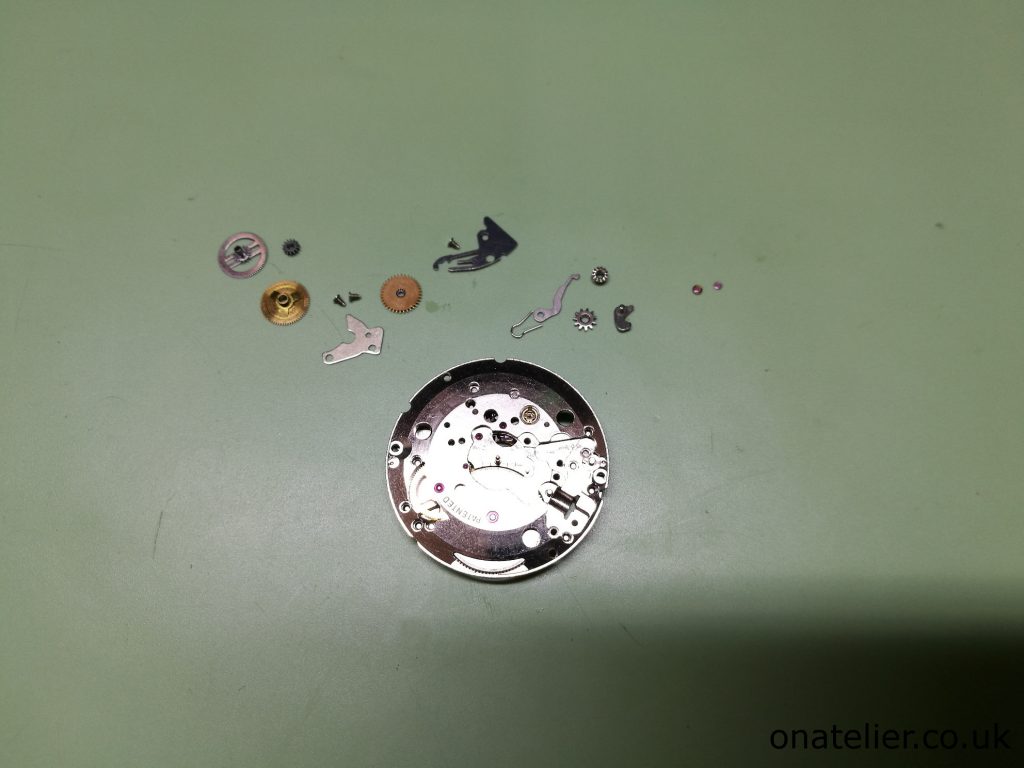 I progress with the other side, and soon have the whole movement stripped out. 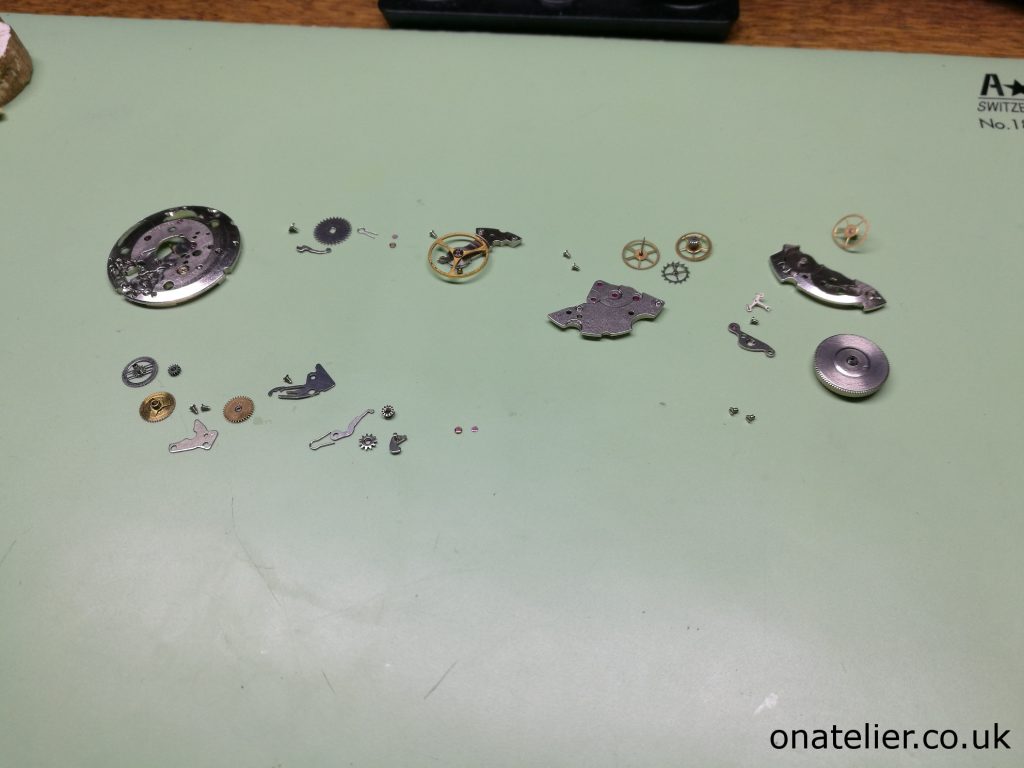 After inspection of the parts, I am a little concerned, as a variety of issues come to the surface: 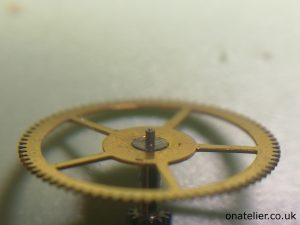 Broken pivot on the intermediate wheel. 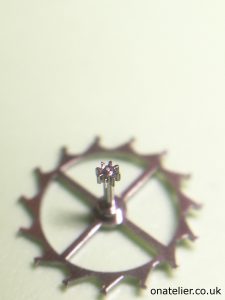 Broken pivot on the escape wheel. 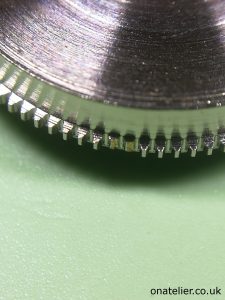 Two teeth missing on the barrel.

All of these issues must be rectified, so I procure the necessary parts. New replacements were purchased for the wheels, but the difficult one was the barrel as it is now obsolete, so I had to resort to sourcing a donor movement. 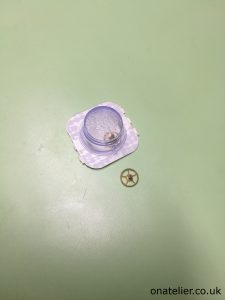 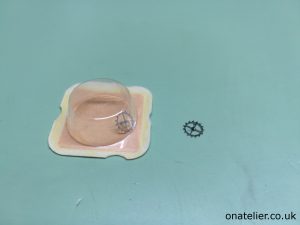 Here is the “new” barrel on the left. 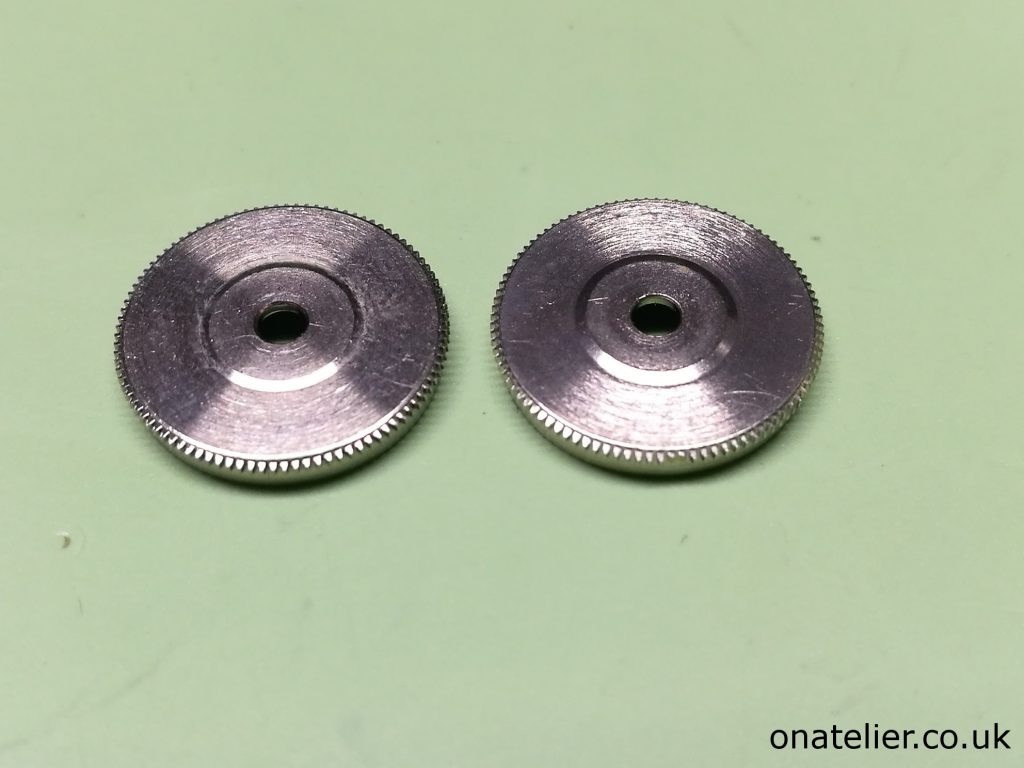 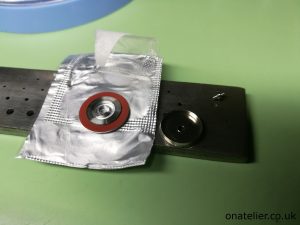 With all the parts now in my possession I resume the work, and start with the new mainspring.

The cap jewels are lubricated. 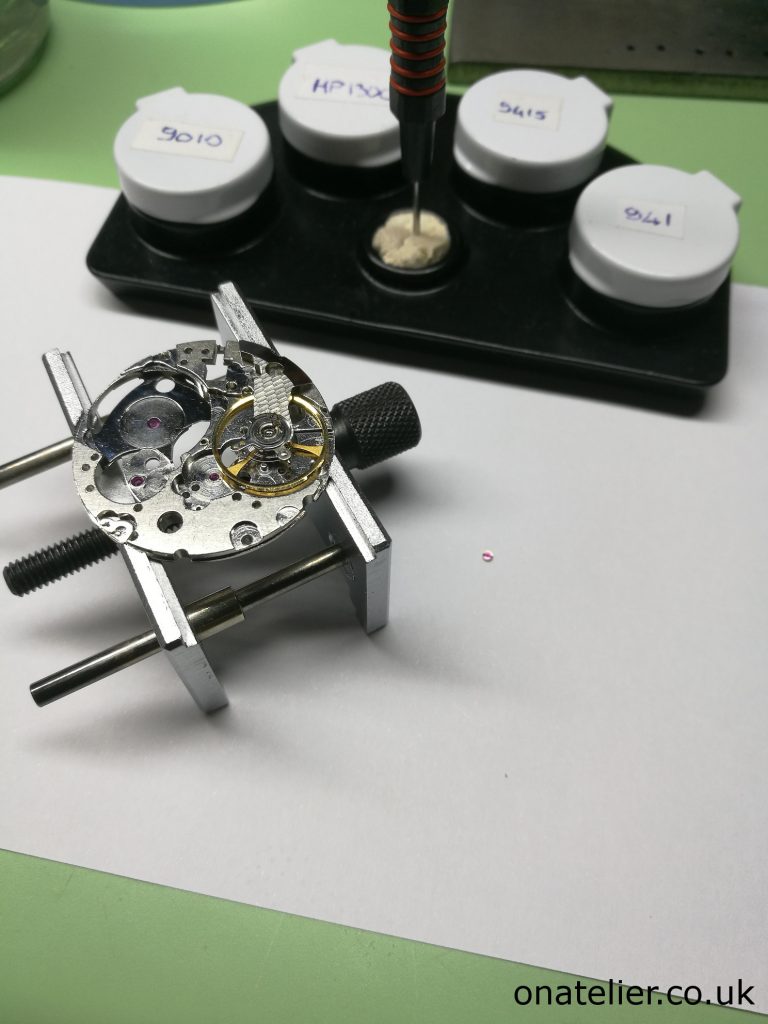 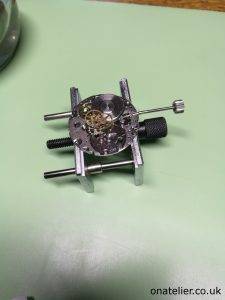 I start rebuilding the movement. Note the new replacement stem which will need trimming later.

The all important stop lever is fitted. 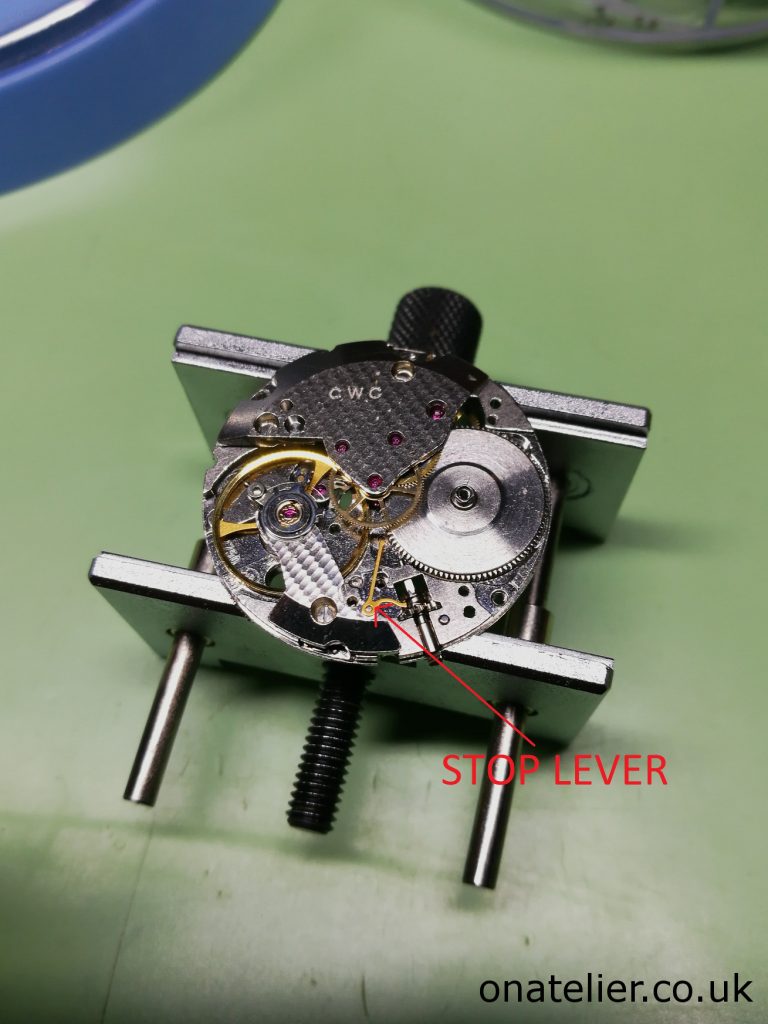 The movement is now fully assembled, and running very well indeed after adjustment and regulation. You have to get it absolutely right before re-casing the watch. Remember it is a “front loader” – you cannot just open the caseback to make the final adjustments on the regulator index. 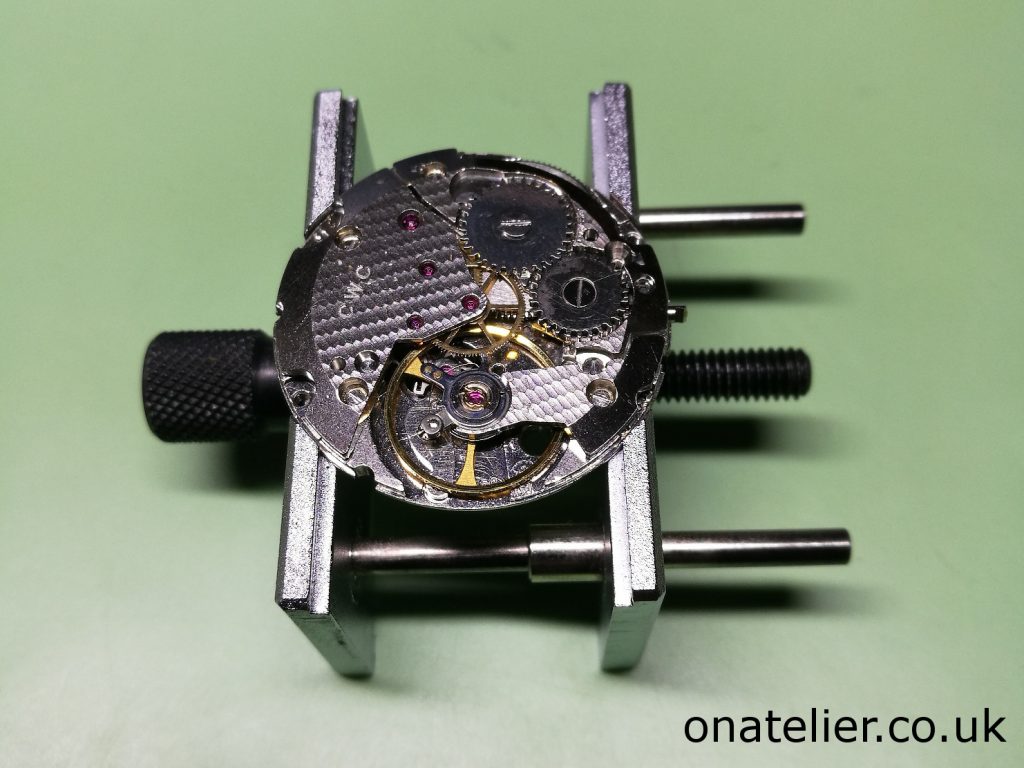 I now turn my attention to the case parts. I have sourced a new stem and crown, so I need to trim the new stem to size. It is a little trickier than usual because of the monocoque design of the case: there is no access to the conventional stem release mechanism, hence the use of a split type stem. 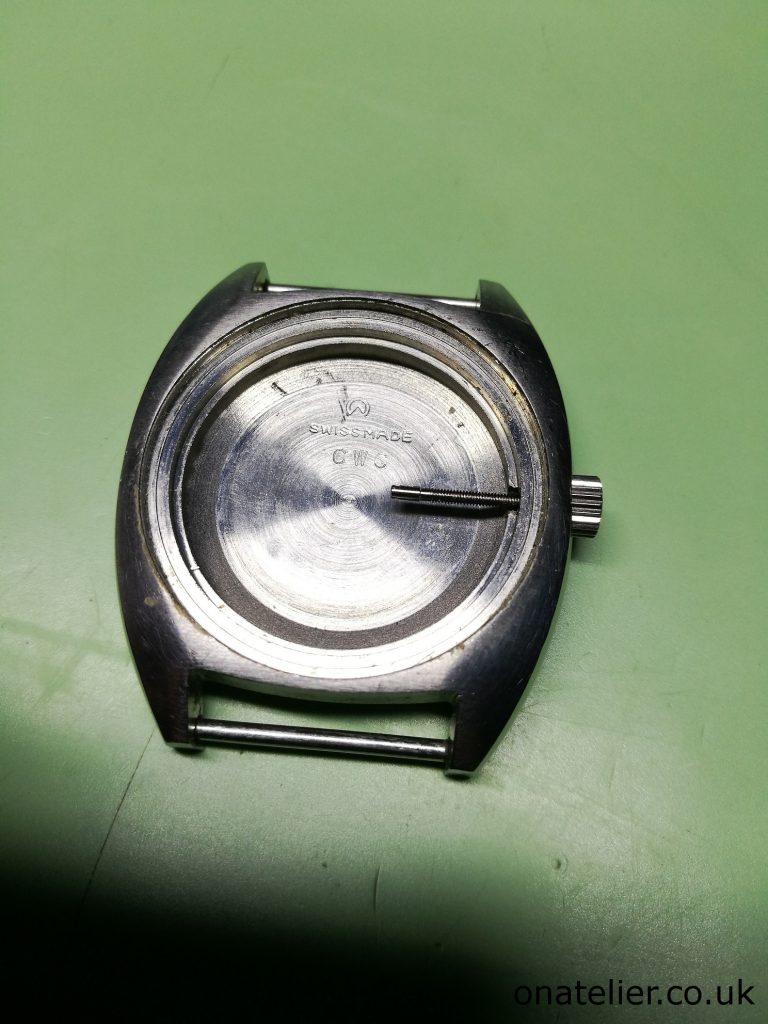 I also clean the case ultrasonically as it looked pretty grubby (see photo above). The stem is trimmed, and the new crown secured on the thread with thread lock. 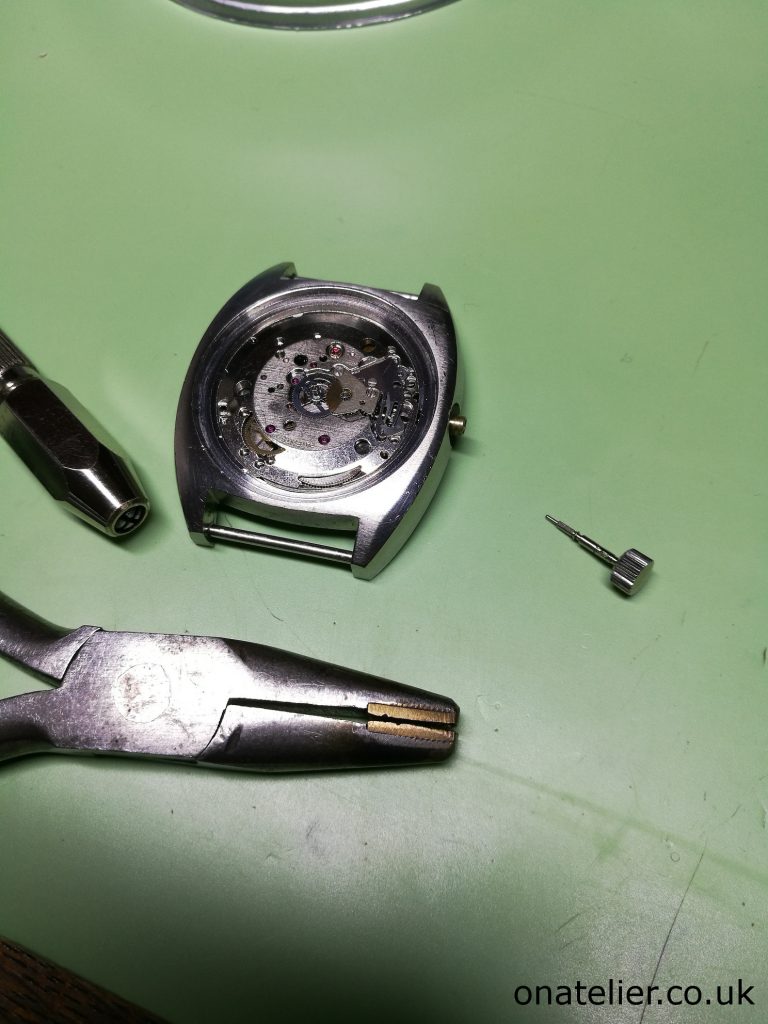 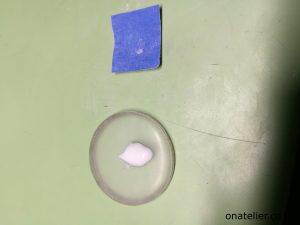 With this done, I give the old crystal a polish.

Generic armoured crystals are available and make an excellent replacement, but the tension ring would look too new and shiny. I want to keep the old crystal to preserve the character of the watch.

It is now looking much better. 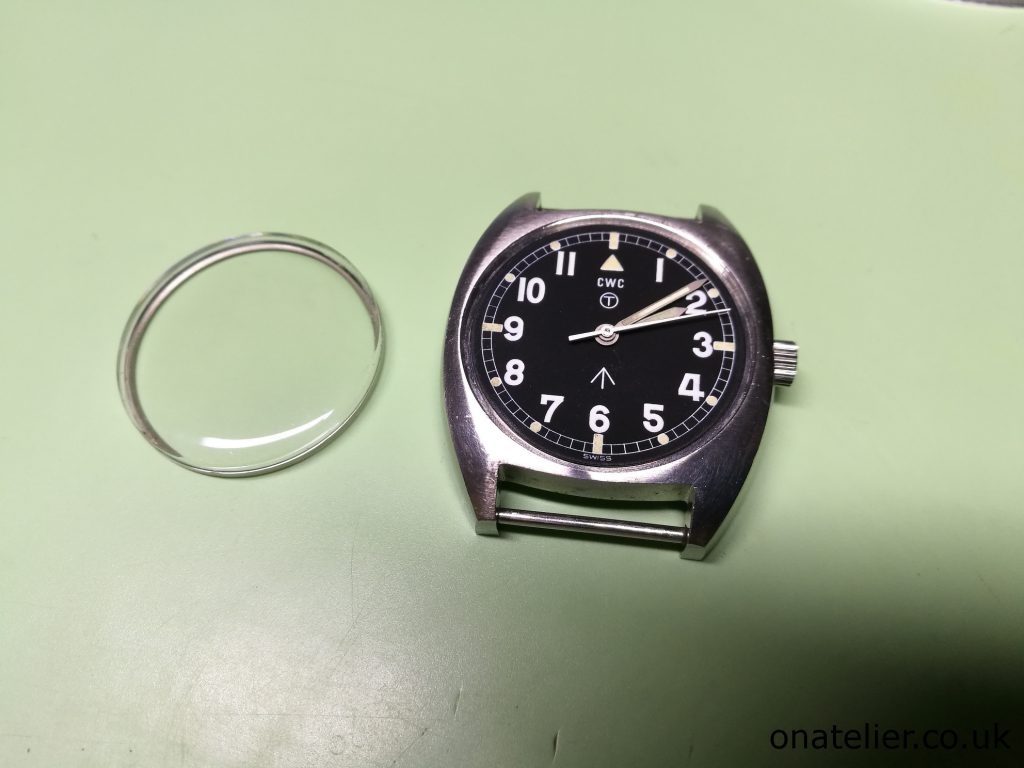 And with the crystal now fitted the job is complete. I did not polish the case, as  authenticity is important on this watch. It does however now look much better, and the fantastic dial and hands are really emphasised now. The watch is also an excellent timekeeper, ready to enjoy a hopefully quieter life from now on! 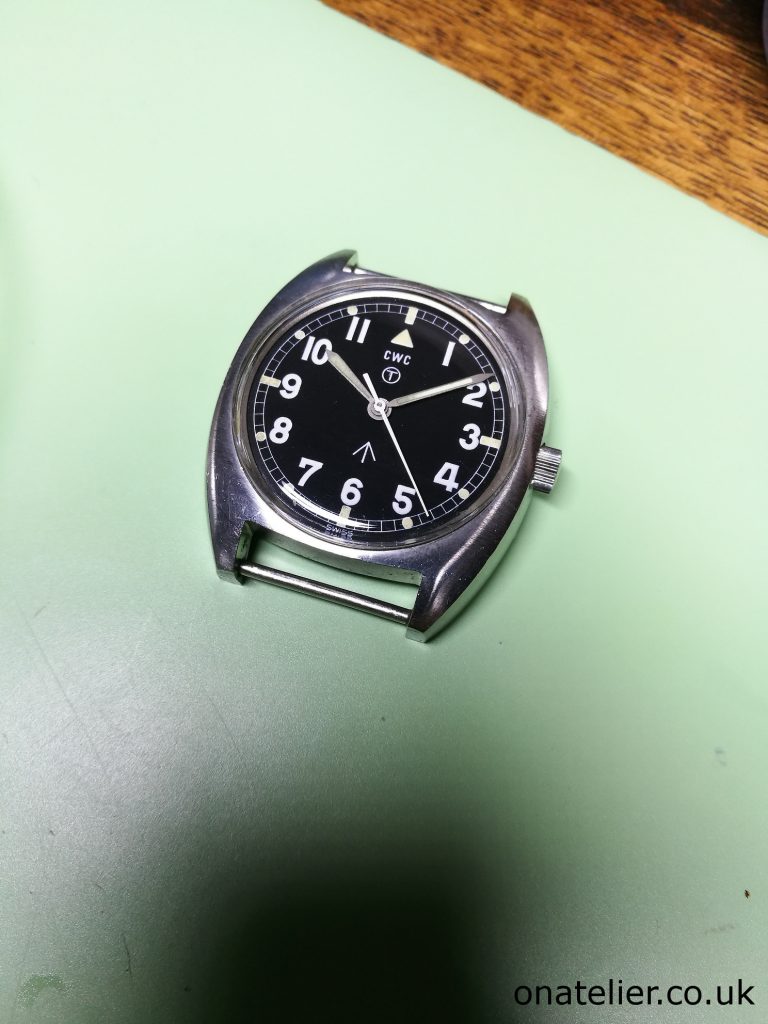