This interesting Bulova automatic divers watch came in for a service. It is a  very collectable model, the “M7” on the caseback and movement indicates that it was produced in 1967. It has a lovely bakelite bezel insert and  is powered by the 17 jewels Bulova Calibre 11ALAC, self winding movement. 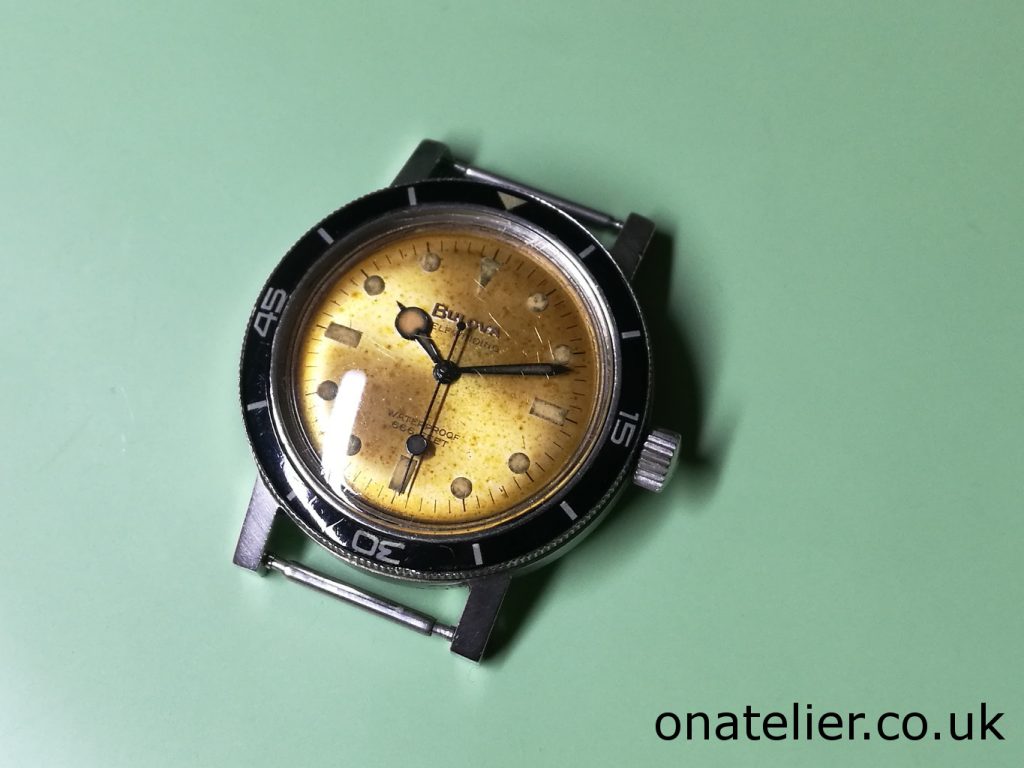 When the watch came in the bezel was seized, the timegrapher trace very poor and the crystal had internal cracks which cannot be polished, so time for a bit of TLC. 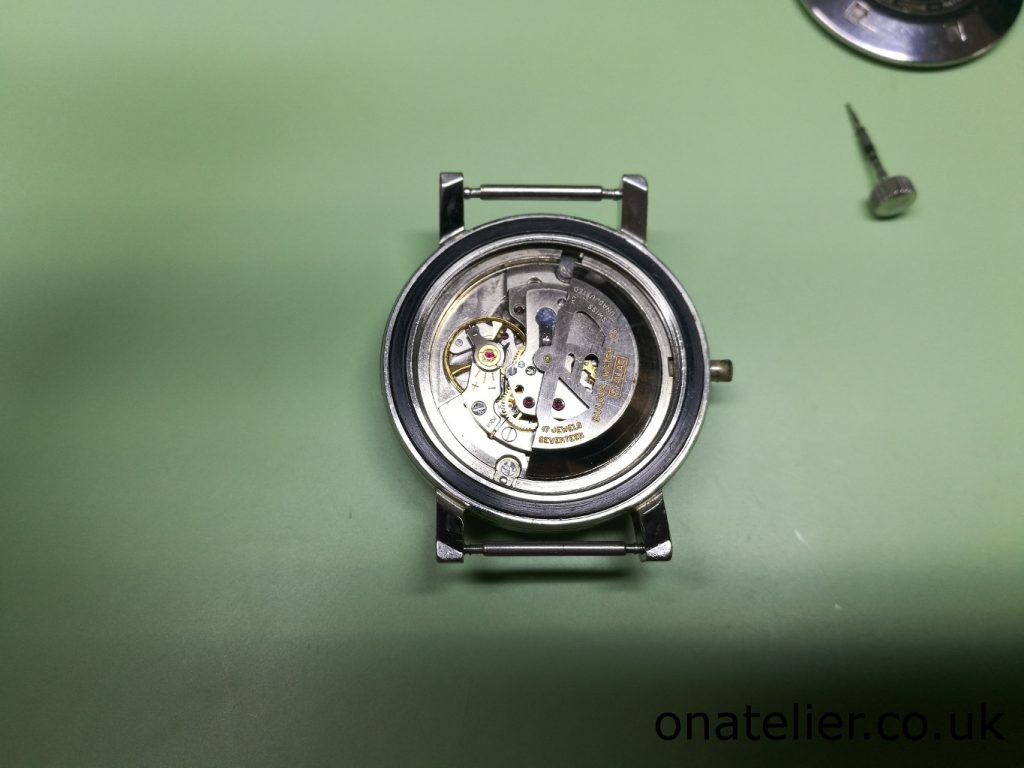 I start by disassembling the automatic works. 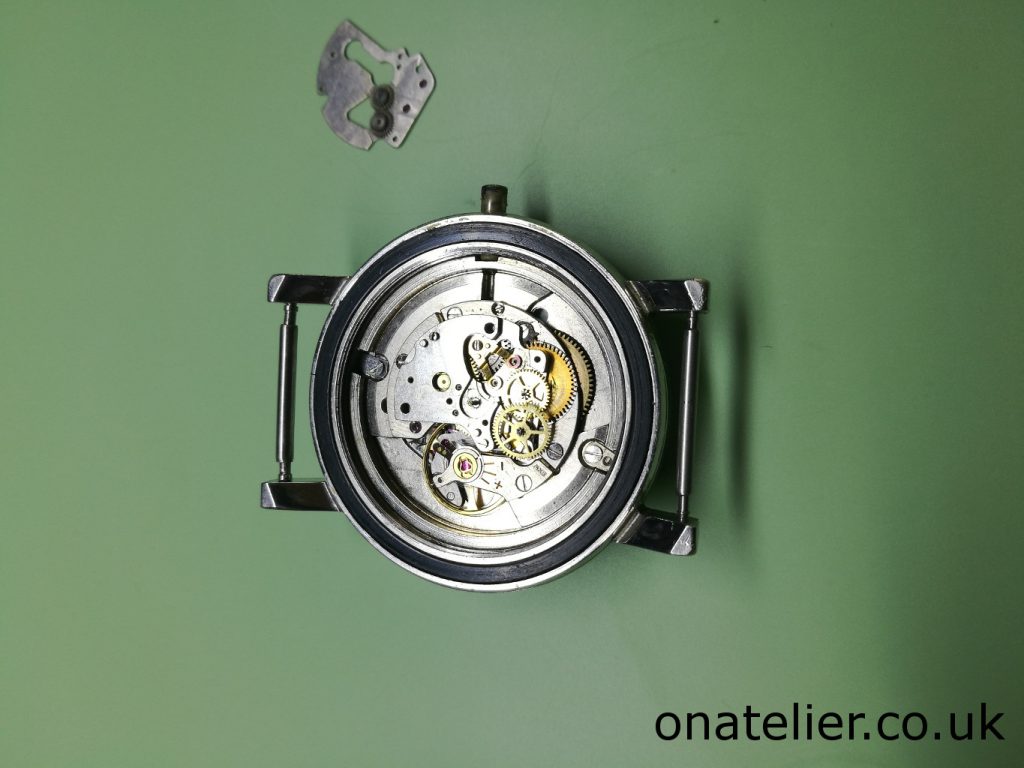 The automatic system on this movement is an unconventional approach to self winding, and is Bulova’s own design. I have included an illustrative picture below extracted from the excellent reference book ” Complicated Watches and their repair” by Donald de Carle FBHI. The mechanism uses a reverser system with Breguet style teeth (identified as 1st and 2nd alternating clutch pinions below), supported by a spring which keeps the wheels in engagement. The ingenious system allows the rotor a full 360 degrees rotation, and winds in both directions. 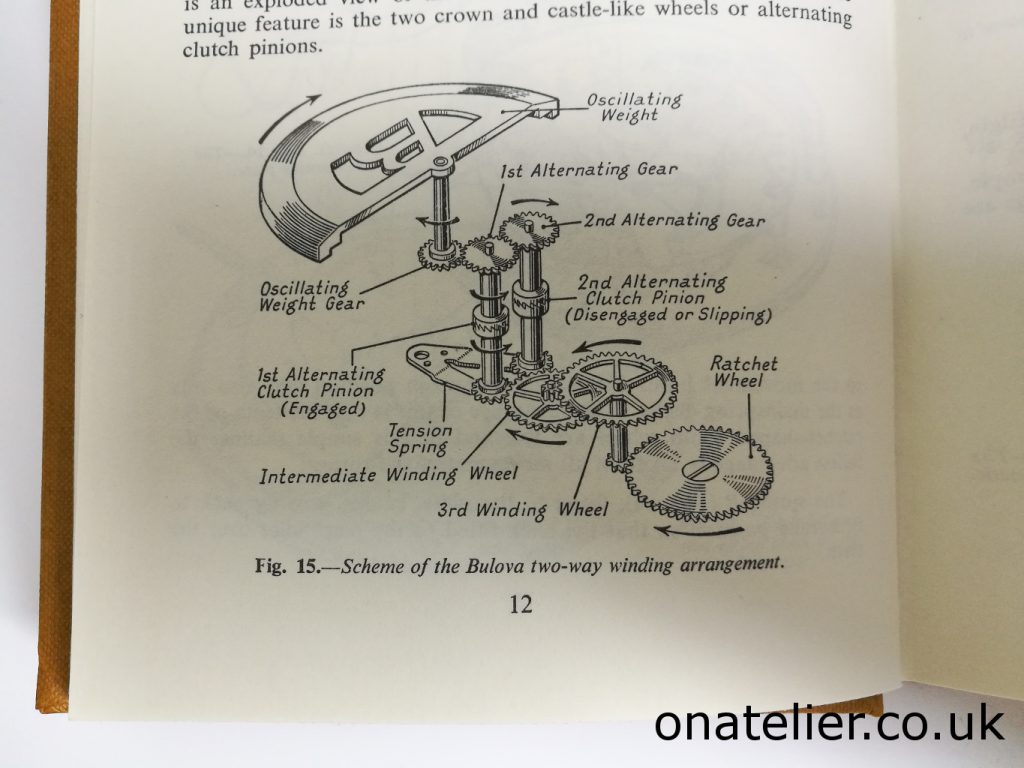 As you can see from the photo below, the wheels are very dirty, and the Breguet teeth quite worn. 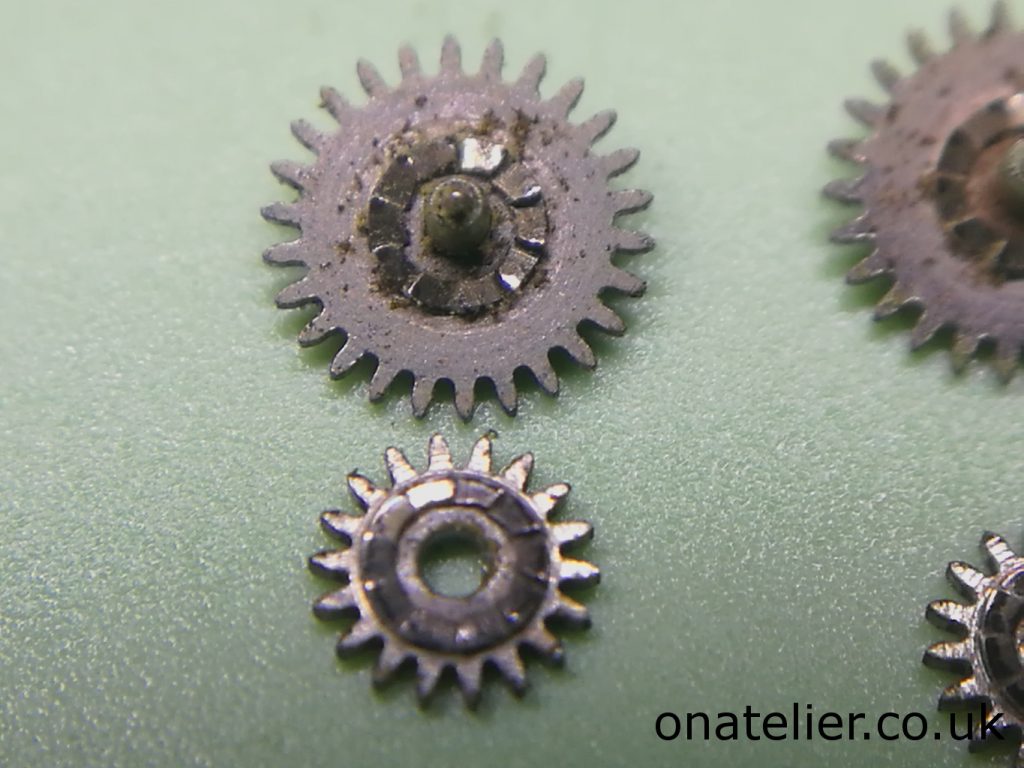 The self winding mechanism is now completely removed. It exposes an indirectly driven seconds mechanism, with a friction spring. 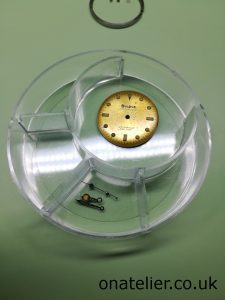 The movement is then removed from the case, and the hands and dial taken off and placed out of harms way.

This is the dial side, a straightforward design with no calendar complication. 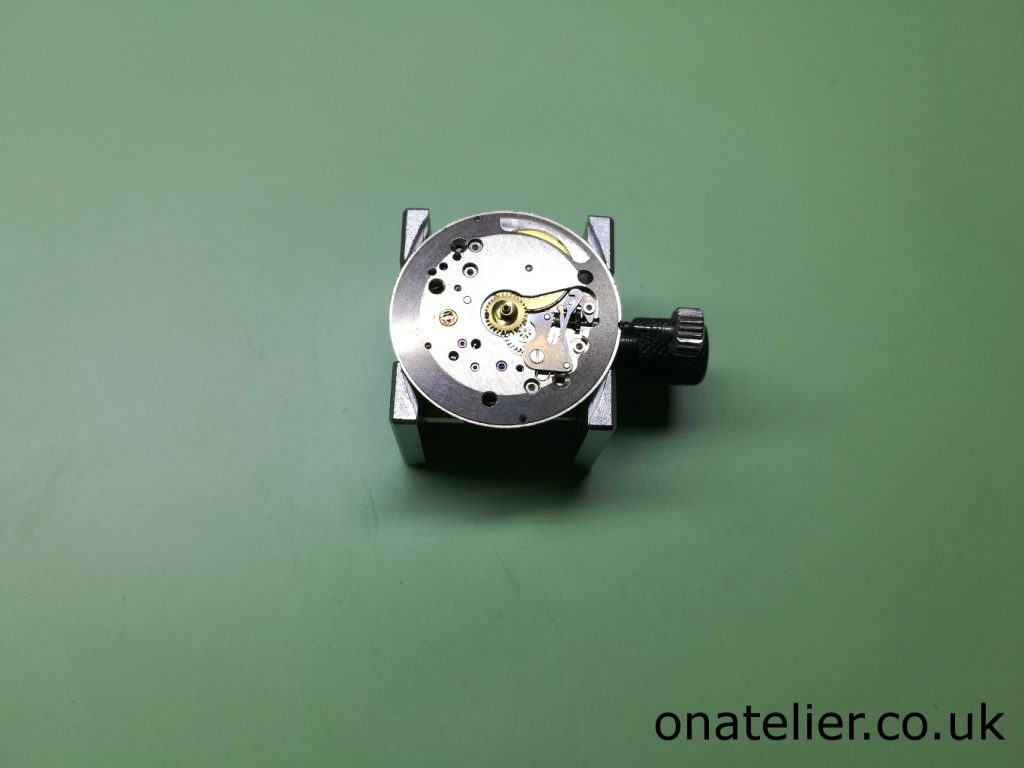 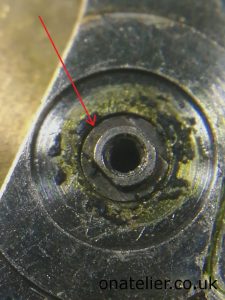 The main issue with the movement is the wear on the barrel bridge . The hole around the barrel arbour has worn out of centre, resulting in too much side shake, and a tilted barrel. This ultimately leads to poor power distribution and binding of the wheels, so it needs to be corrected.

The best course of action here is either re-bushing or replacement of the bridge, I will opt for the latter. 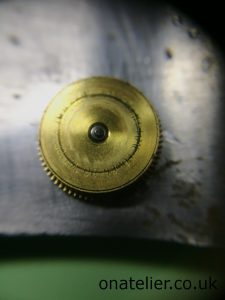 The barrel, with a “do not open” warning. This one can actually be opened with no issues… 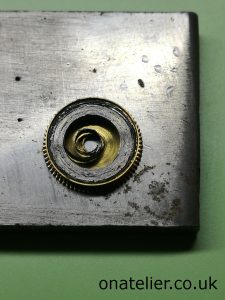 … which is a good job as it is rather dirty, with a lot of dry lubricant.

The movement is now fully stripped down. 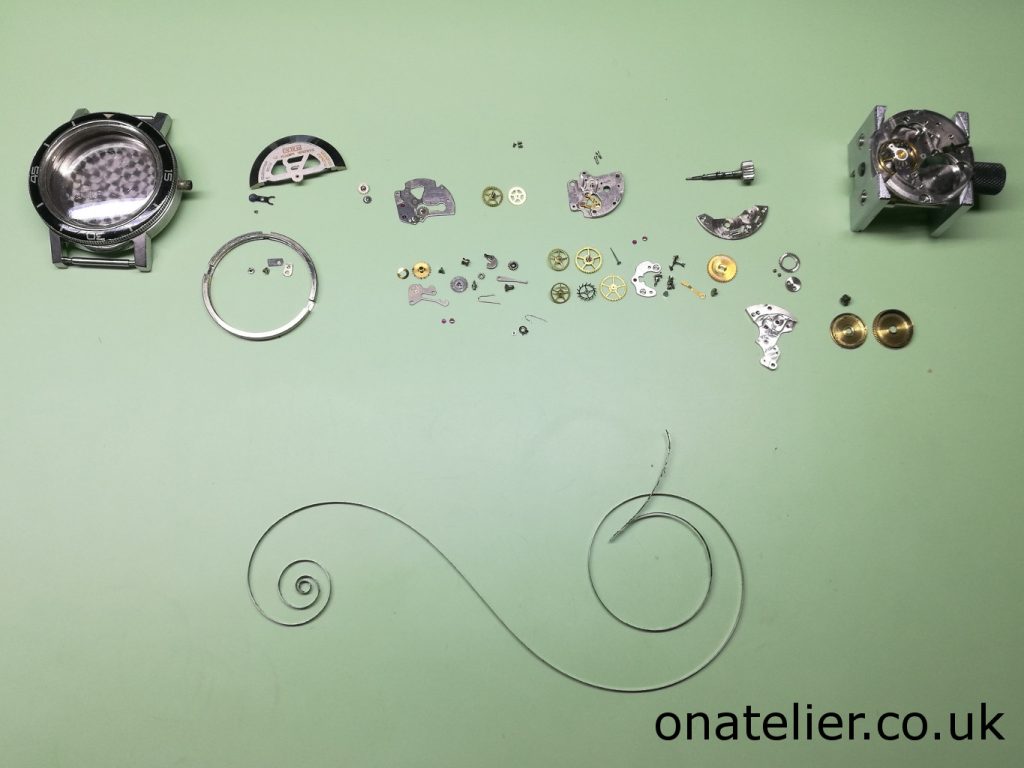 I source a donor for a reasonable price, and upon delivery I am pleased to find it is in impeccable mechanical condition , so I will be using parts to replace the barrel bridge, reversers and also some cosmetic wear on the ratchet wheel. 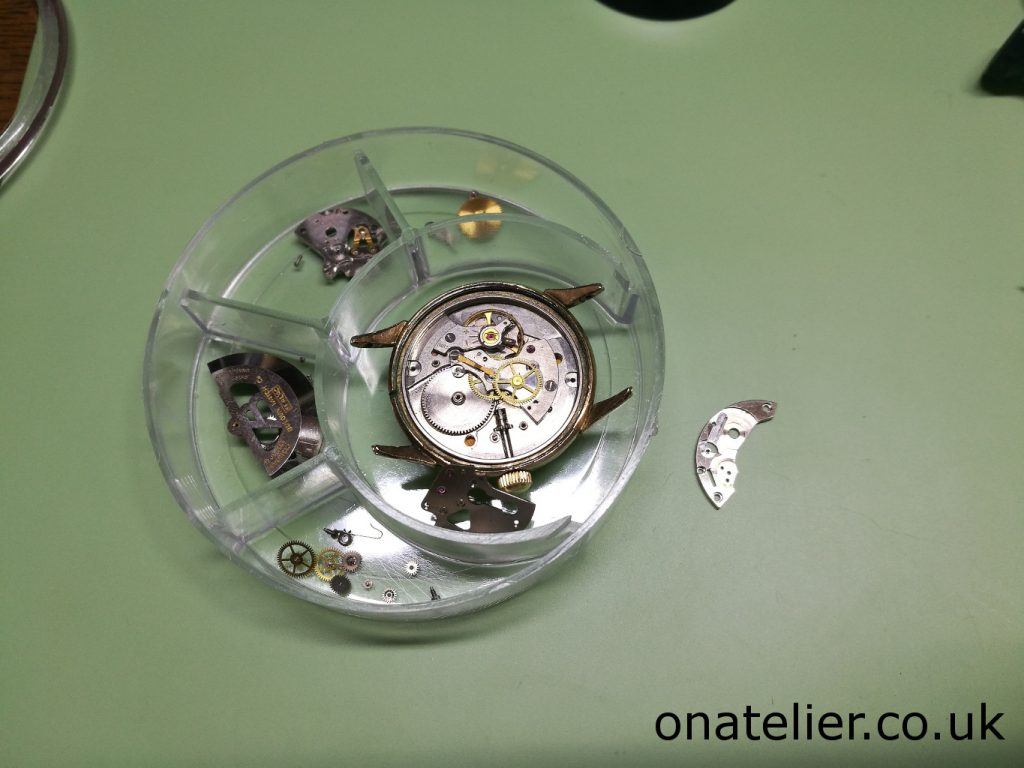 A replacement mainspring is not available so I opt for the next best thing in this scenario which is to strip, clean and lubricate the original mainspring before rewinding it with a mainspring winder. It is in good condition so not an issue. 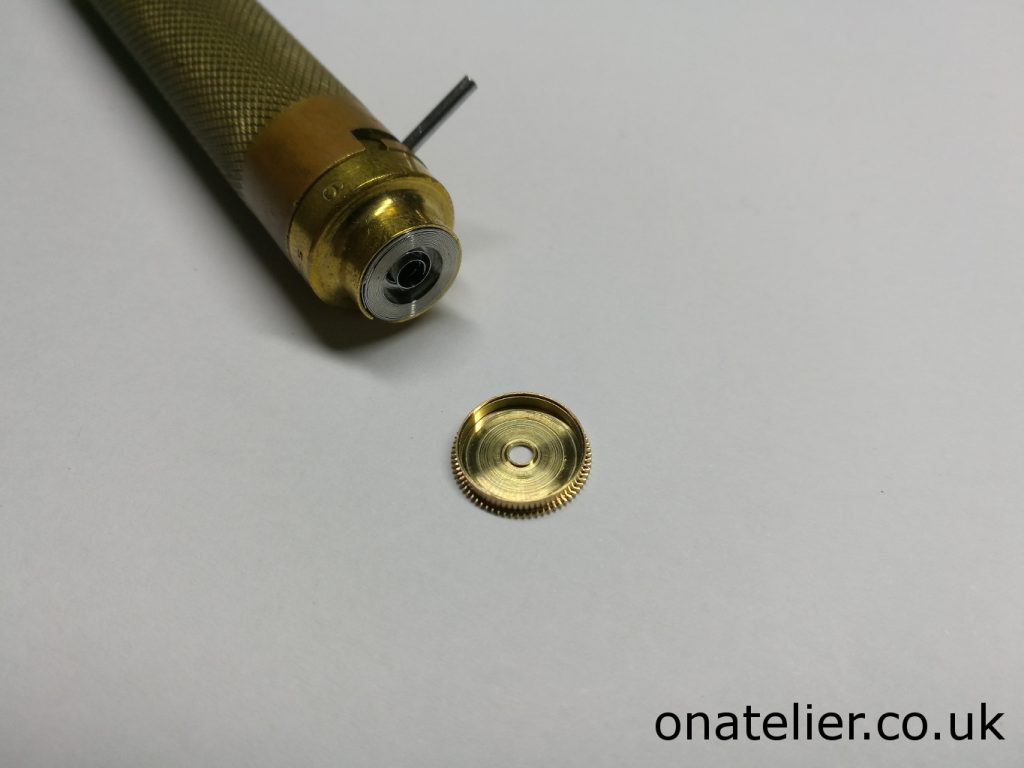 The movement is re-assembled. The train is now in place with the “good” barrel bridge. 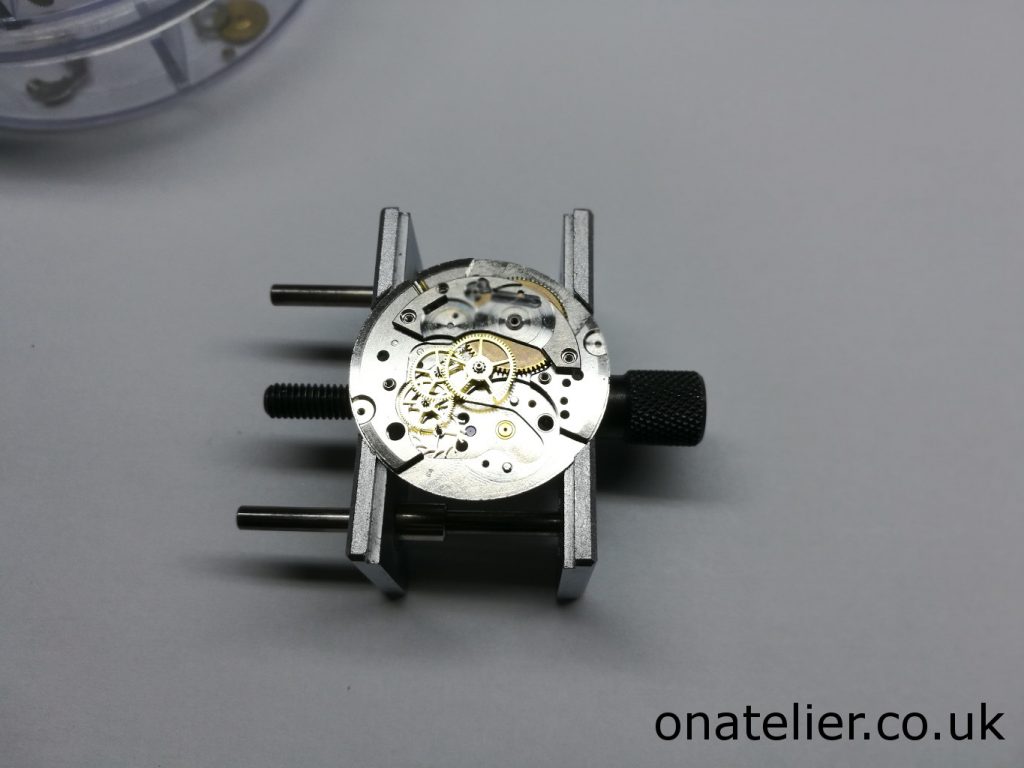 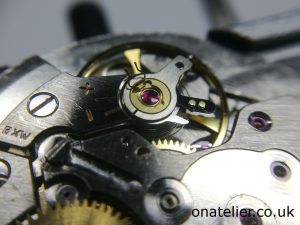 The main movement is now re-assembled, and ticking away nicely. Looking much better as well with the donor’s ratchet wheel. 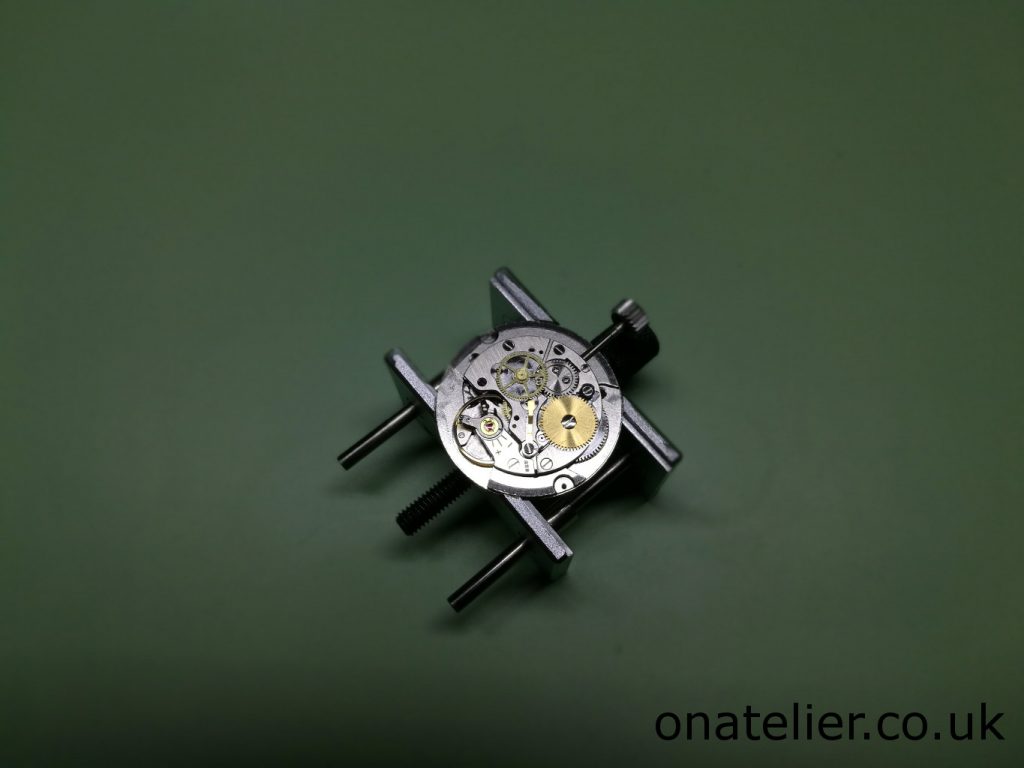 Dial side is put back together. 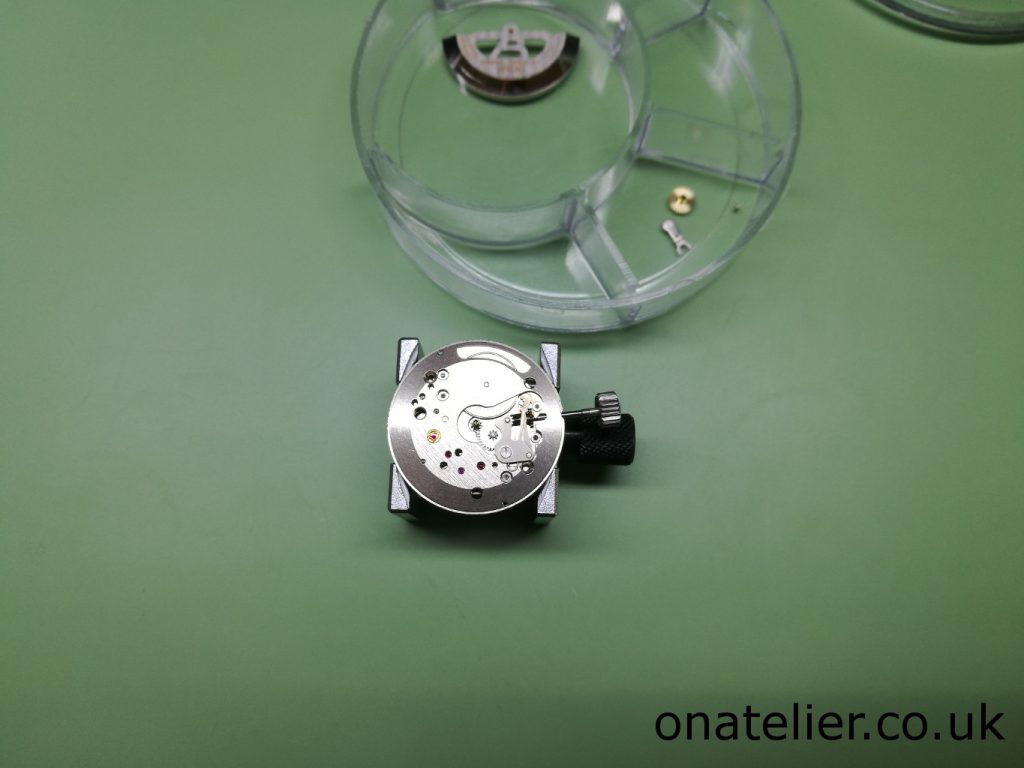 The self winding mechanism is now being re-assembled. 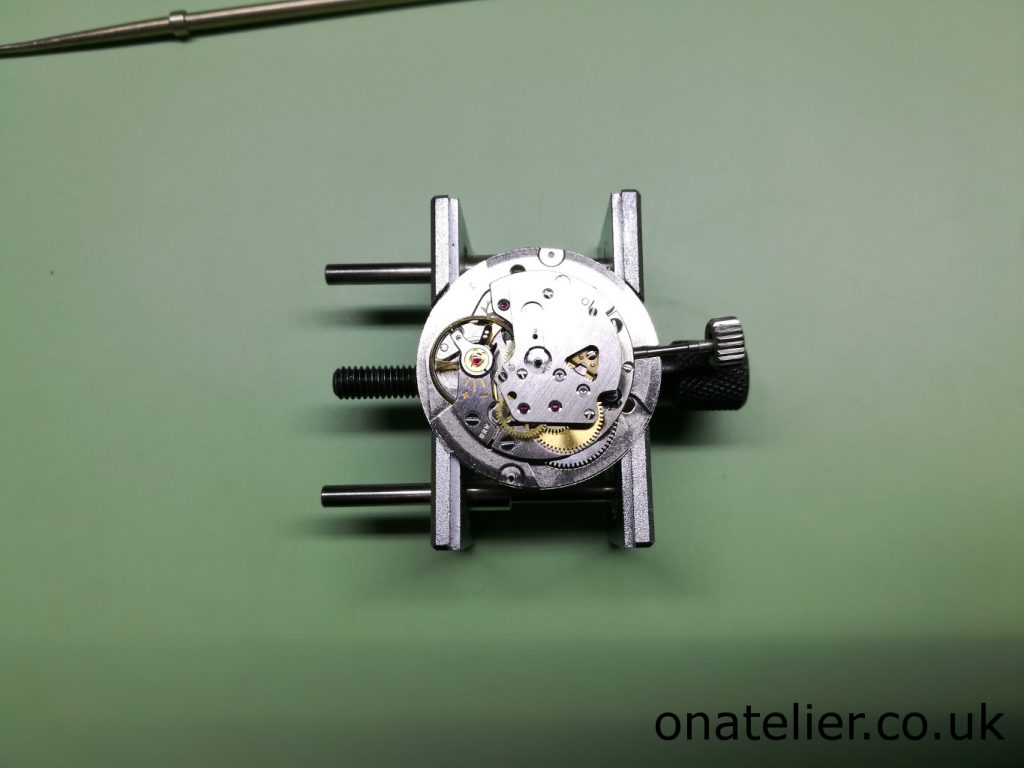 With the movement now performing very well, I turn my attention to the case. The seized bezel is removed and cleaned up, which is all that is needed to free it up, it now rotates smoothly. A new crystal is fitted. 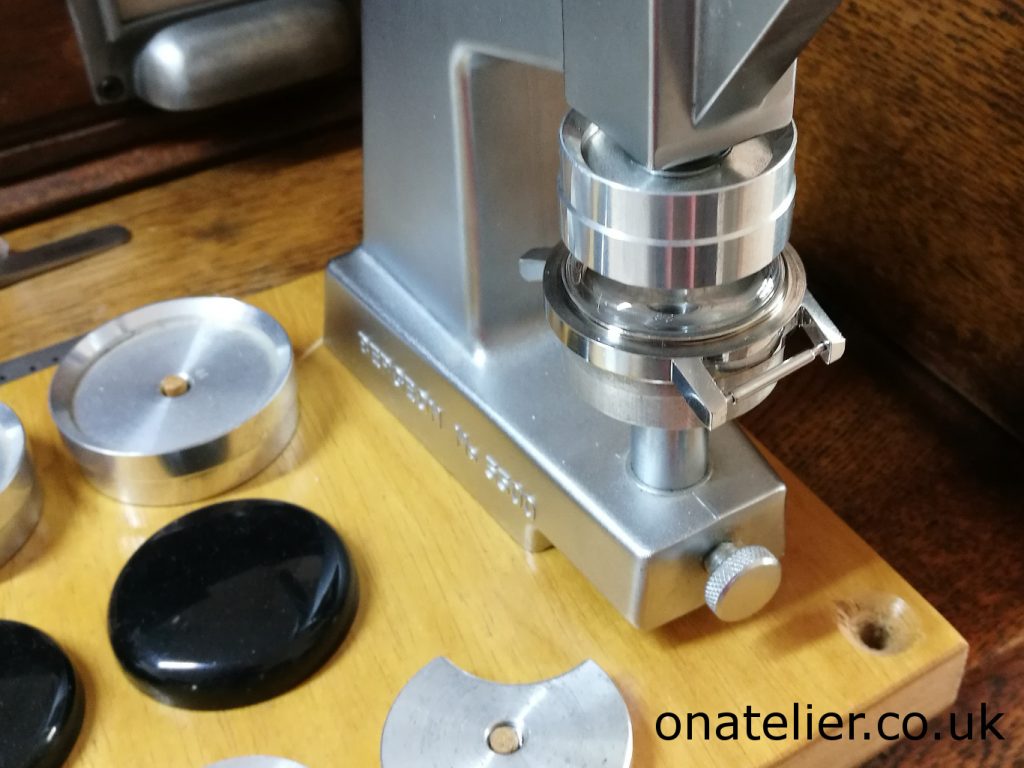 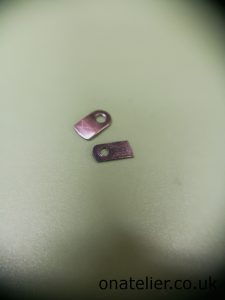 Only a detail, but there is a makeshift case clamp, which has obviously been made out of a piece of mainspring at some point in the past – very resourceful, and perfectly functional, but I opt for a replacement case clamp. 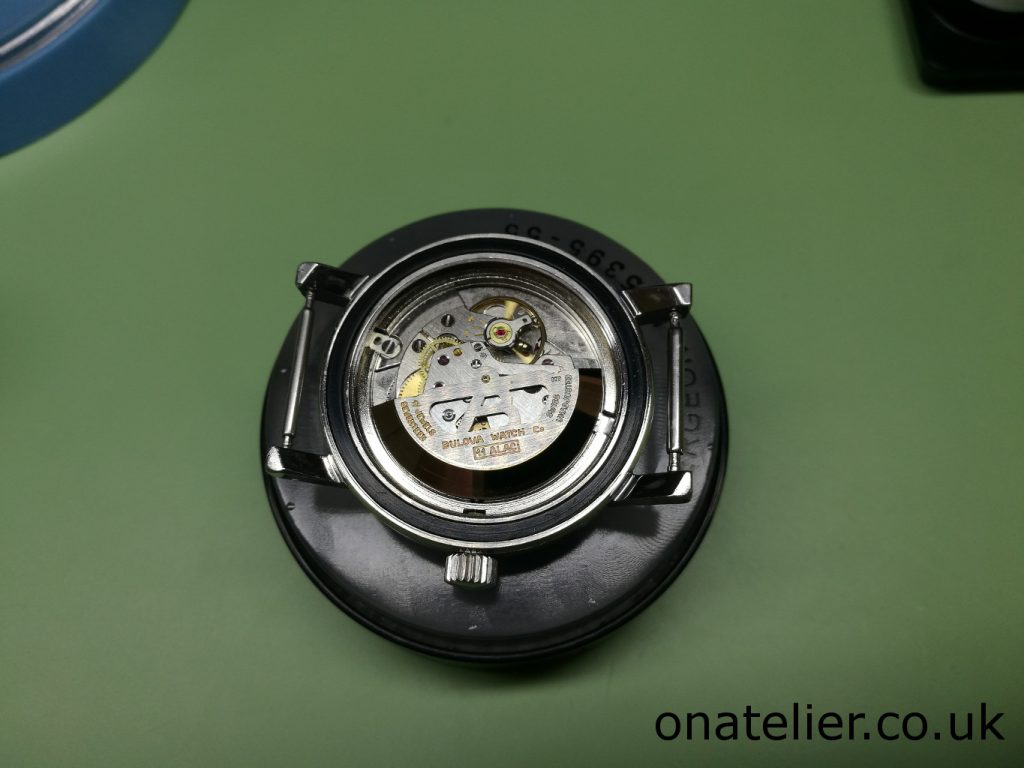 And the watch looks and works great again. I would like to conclude this article by thanking my client Trevor for giving me the opportunity to service this rare Bulova automatic 666 feet divers watch and feature it on the blog. 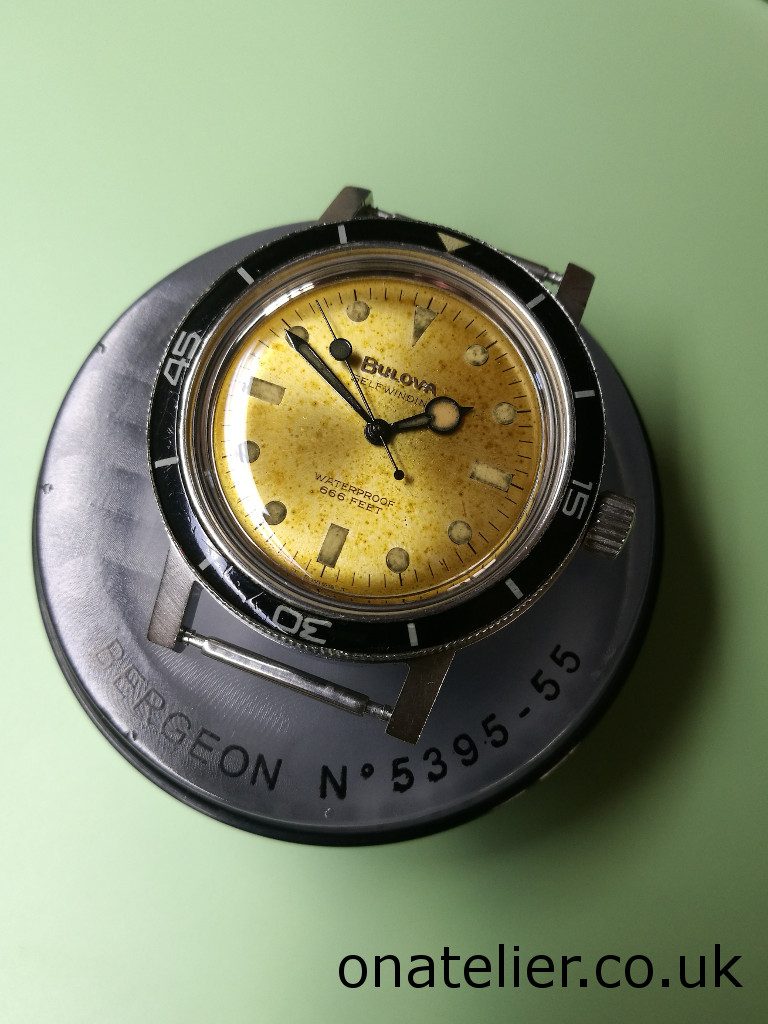