Anthony sent me this lovely Speedbird II PRS-7 watch for a service. The Speedbird II  was manufactured by Timefactors, a British company owned by Eddie Platts who launched the Speedbird II back in 2002. Only 300 pieces were produced, in either black or ivory dial. The production of this watch follows the success of the original Speedbird PRS-1, a design of military influence, in the style of watches issued to pilots of the British Overseas Airways Corporation in the 1950s. It is easy to see why the Speedbird was a success as the watch feels very well built, and looks very smart indeed. 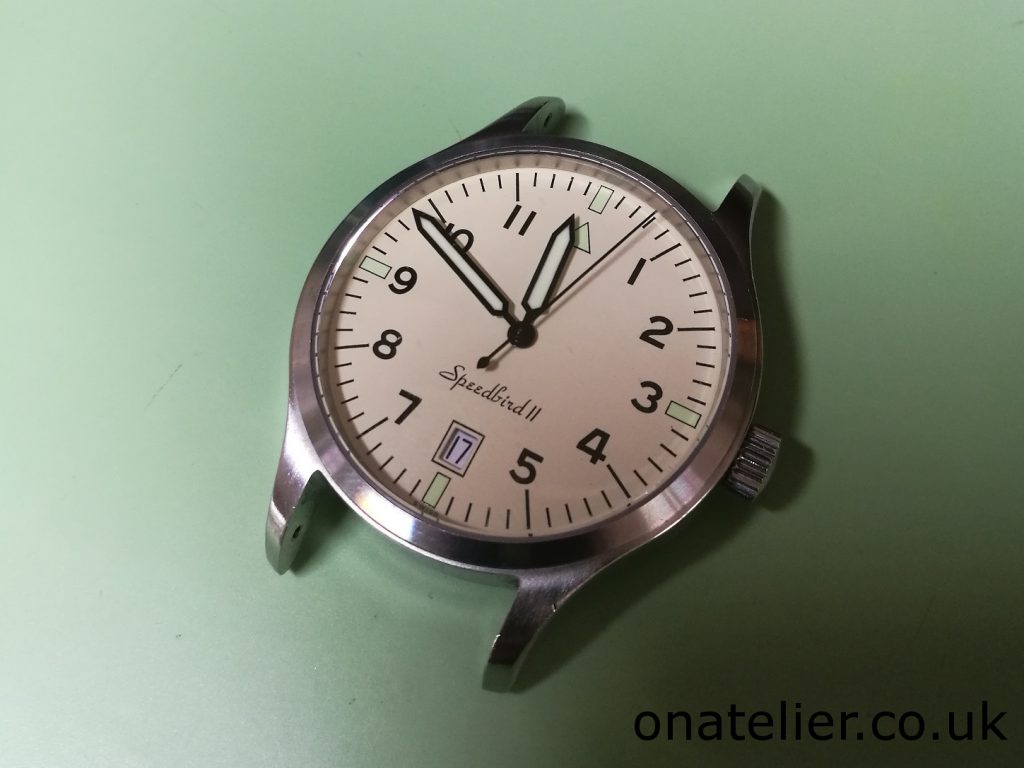 I start the service of the Speedbird II PRS-7 by checking how it performs on the timegrapher. Anthony confirmed that the watch had been serviced before, but this was a long time ago. 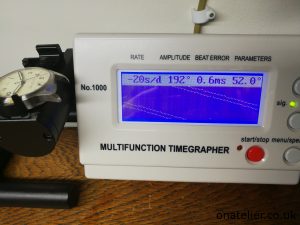 After a full wind the amplitude is very low, and timekeeping is not great at 20sec late/ day. Definitely time for a service.

I start by opening the screwback case. 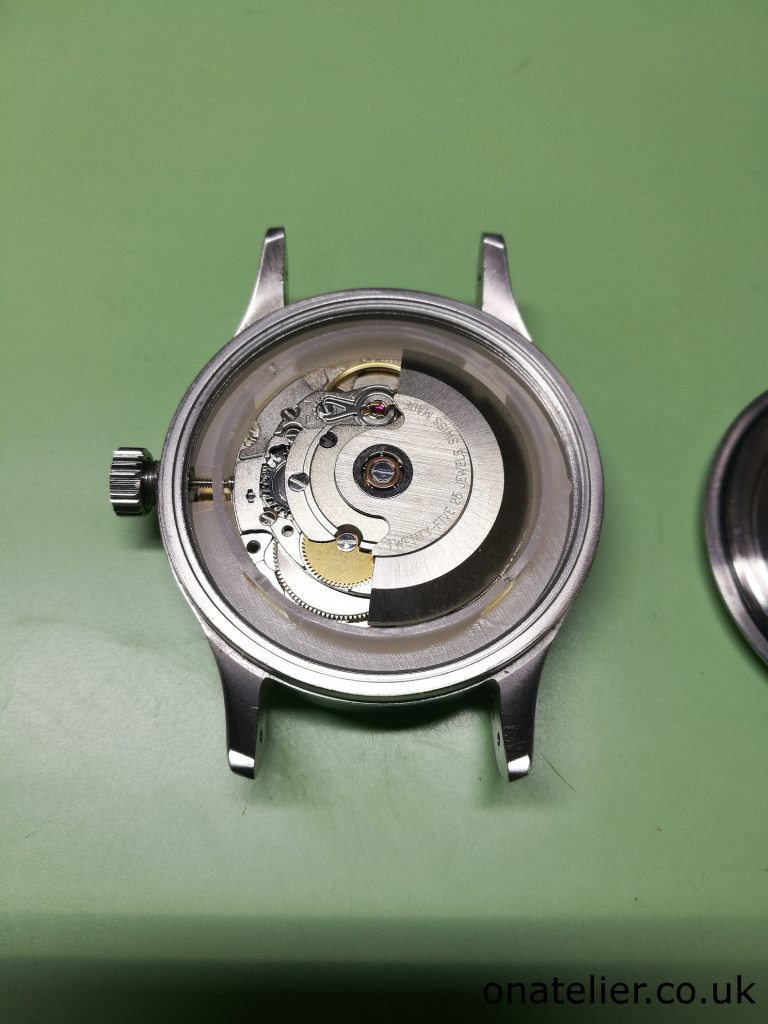 After removing the automatic works we get a better view of the ETA 2824-2 movement. 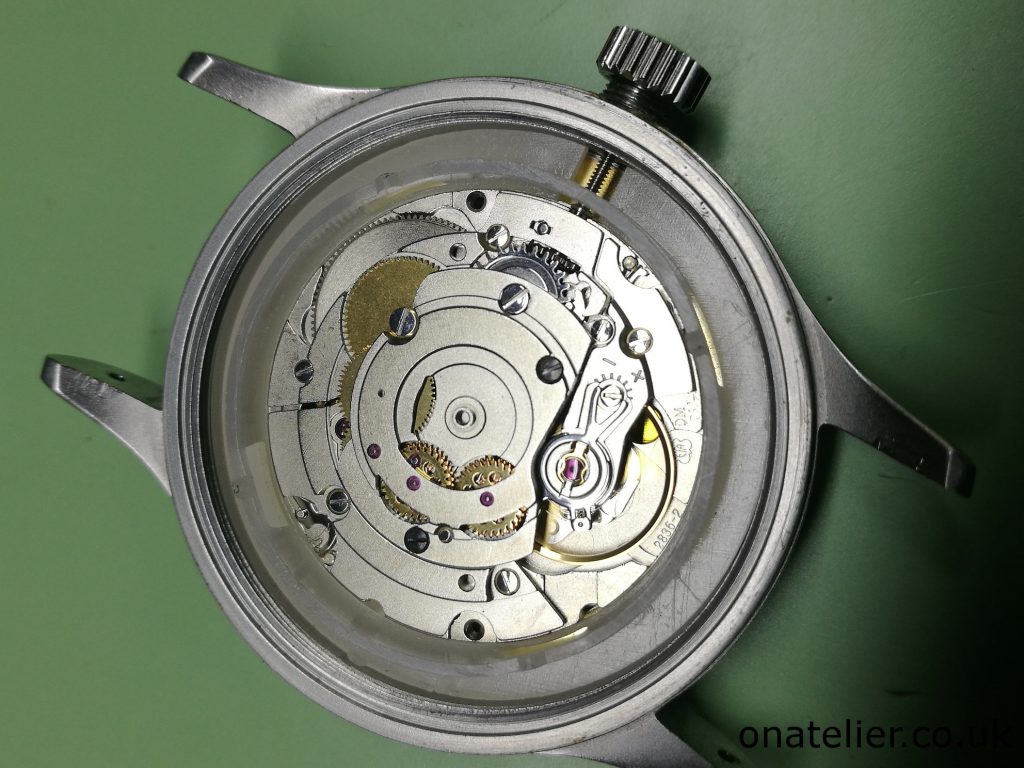 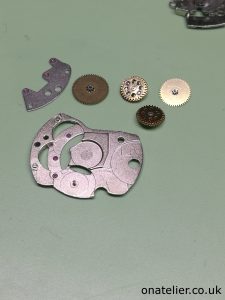 I strip the automatic works. 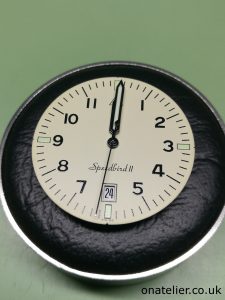 The hands are aligned, ready to be carefully removed, to allow removal of the dial.

This is the dial side of the movement. 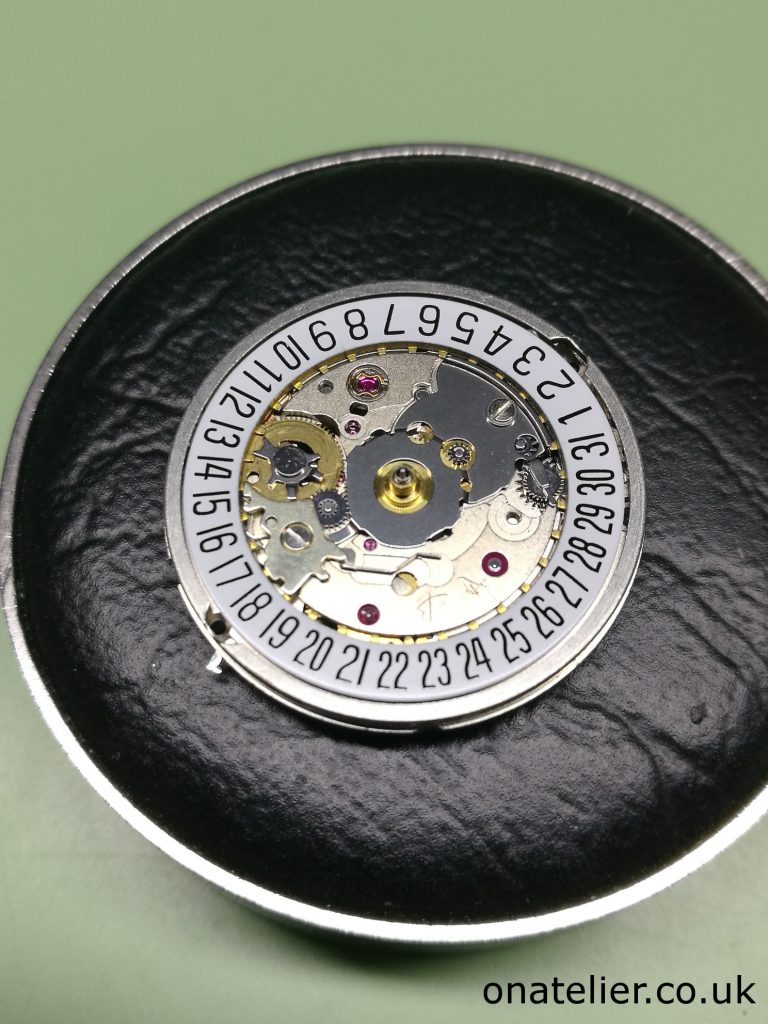 The dial side is now fully disassembled. 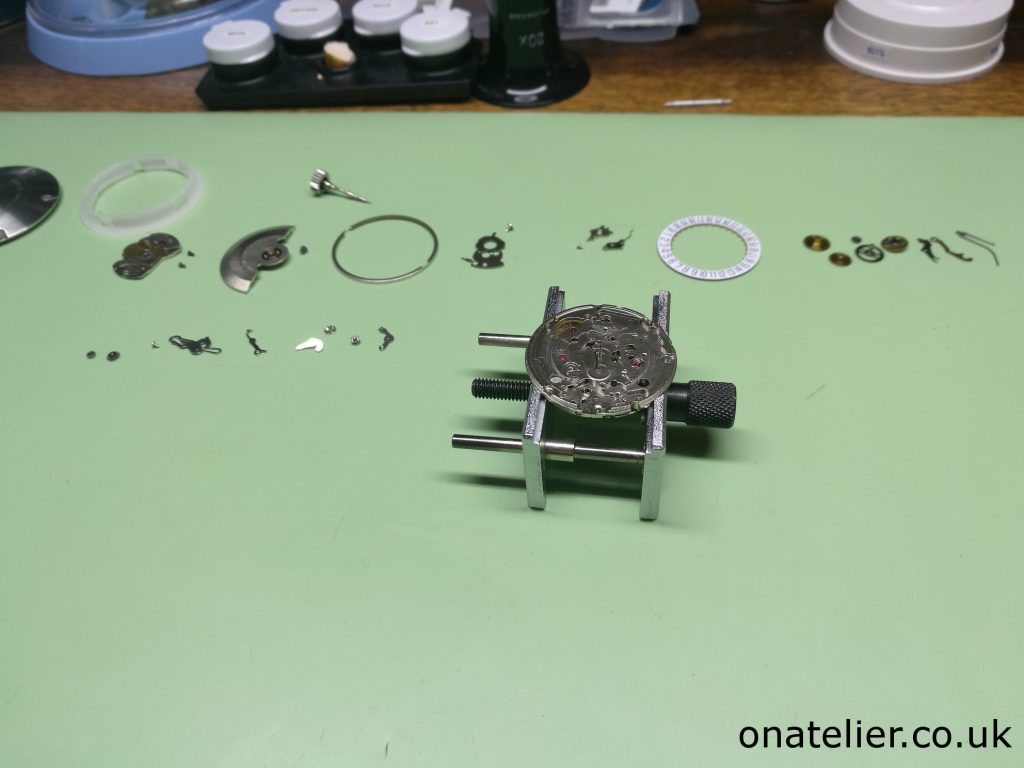 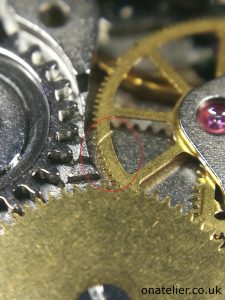 Moving on to the other side. You can see the movement is starting to grow hair, clearly time for a good clean! Small particles of lint like this can cause havoc with the performance of a watch.

A nice view of the train wheels. 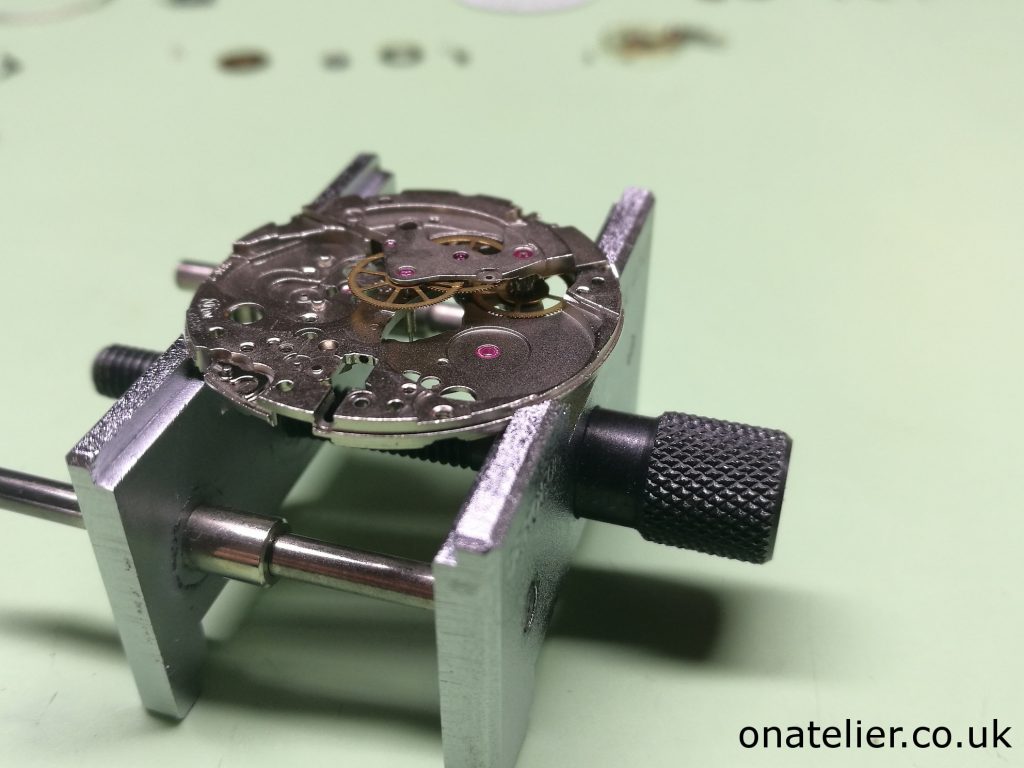 However upon closer inspection, I can see that the oil in the movement has dried up in the jewel around the pivots. This goes some way in explaining the poor amplitude I observed earlier. More lint also visible just under the bridge. 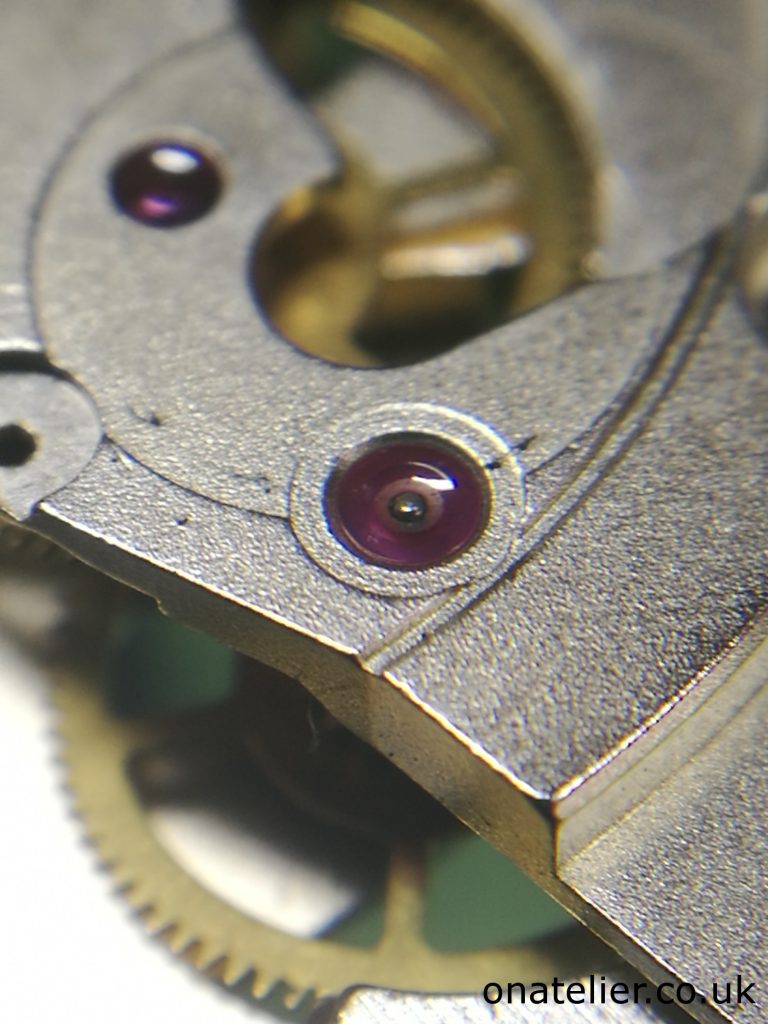 The movement is now fully stripped, ready for ultrasonic clean of the parts. 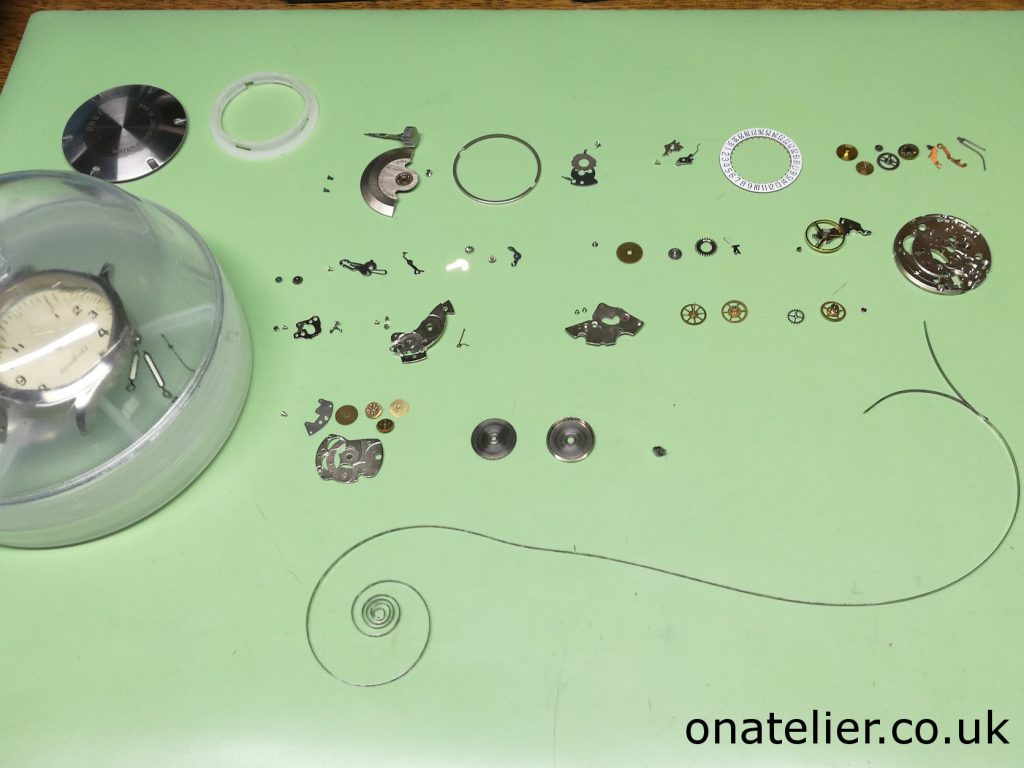 Upon inspection of the parts, two issues come to light.

Firstly, the intermediate wheel pivots are very worn indeed, see pic below. This is a result of the dried up lubrication observed earlier. The wear is significant as this wheel is subjected to the highest amount of torque in the train.

The trouble with dry oil, is that, not only does it no longer play its role as a lubricant, but it turns into an abrasive, mixing with the tiny metal particles caused by wear. Once a watch has passed that point, the wear will be much more significant, and it happens much quicker. 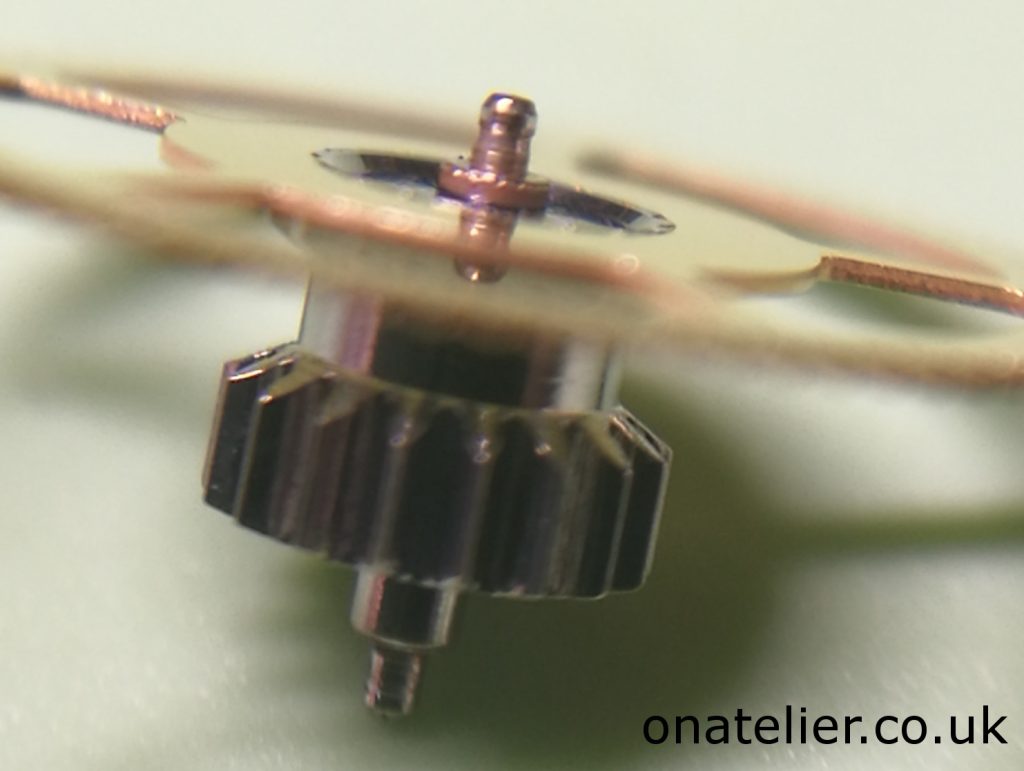 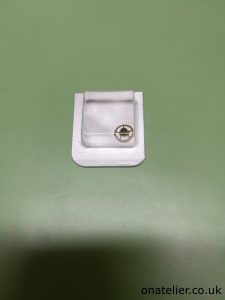 This is what the new pivot looks like. What a difference! Without it the watch would have had no chance of achieving a good performance: wear increases friction, energy loss leading to loss of amplitude of the balance and inconsistency in timekeeping. 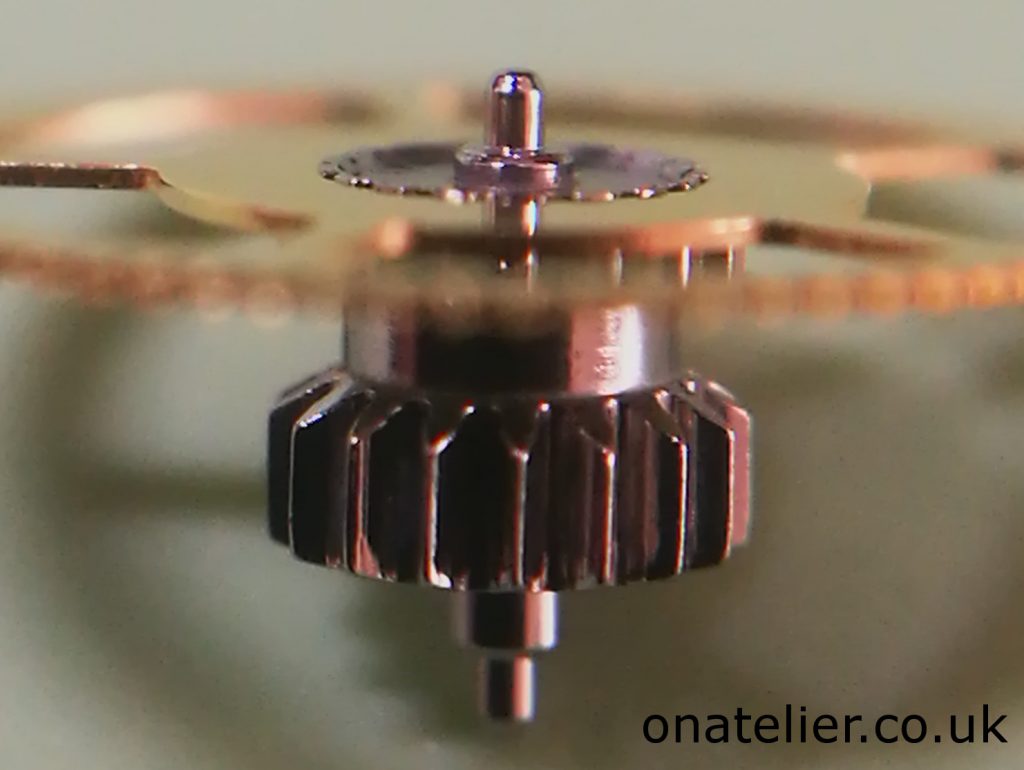 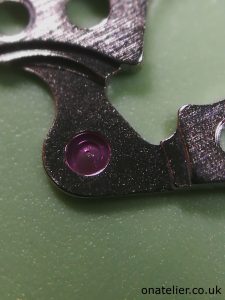 The second issue is a tiny chip on the pallet bridge jewel. The jewel is pressed in, but it actually works out more cost effective to replace the whole bridge / jewel assembly.

I start rebuilding the barrel assembly with a new mainspring. 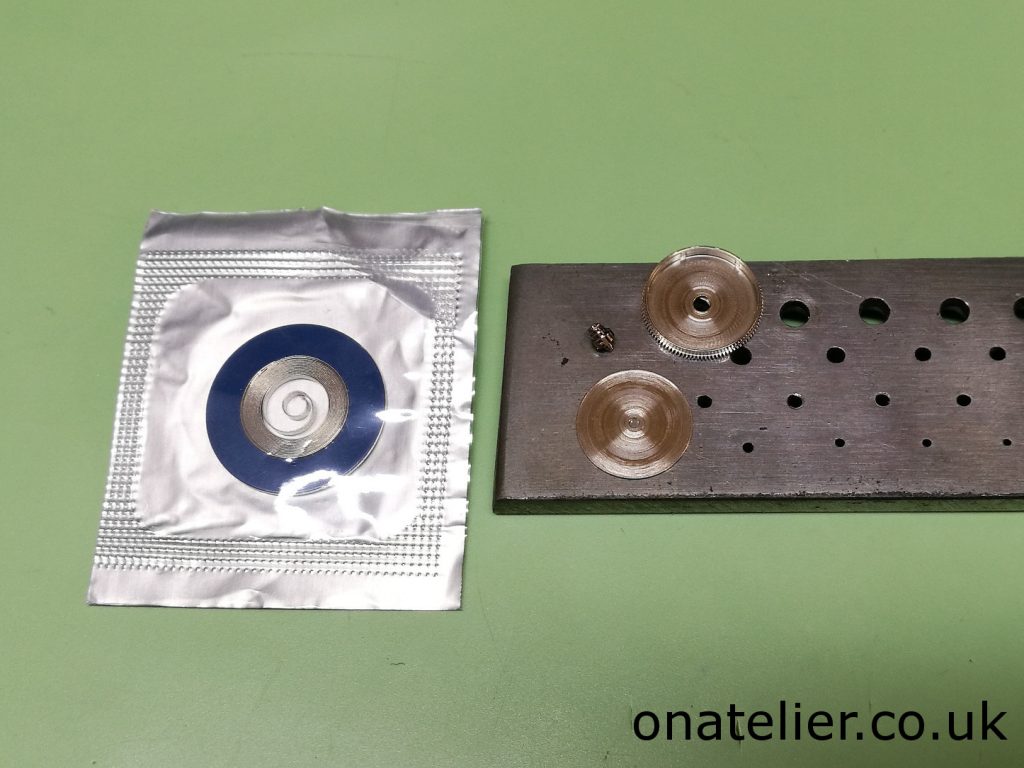 The wheel train, ratchet wheel and crown wheel are installed. Now time to install the escapement with the new ETA pallet bridge. 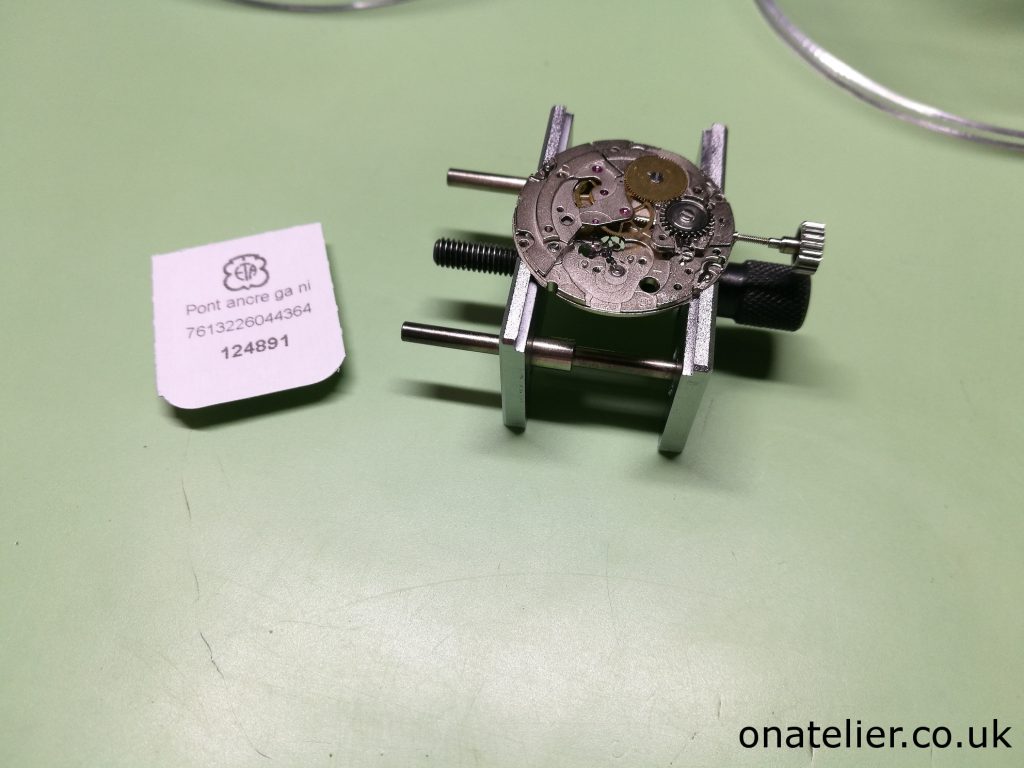 The escapement is now in place, the movement is ready to be tested. At this stage I also regulate it coarsely, I will fine tune later during testing,  when the lubricants have settled. 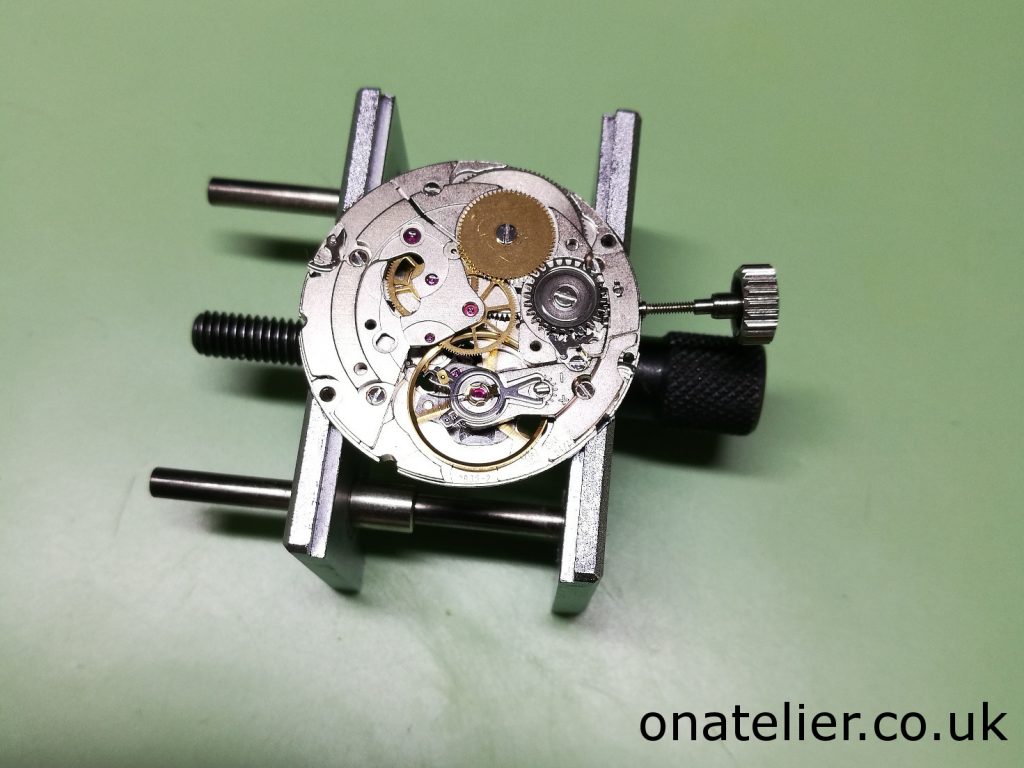 I re-assemble the dial side. 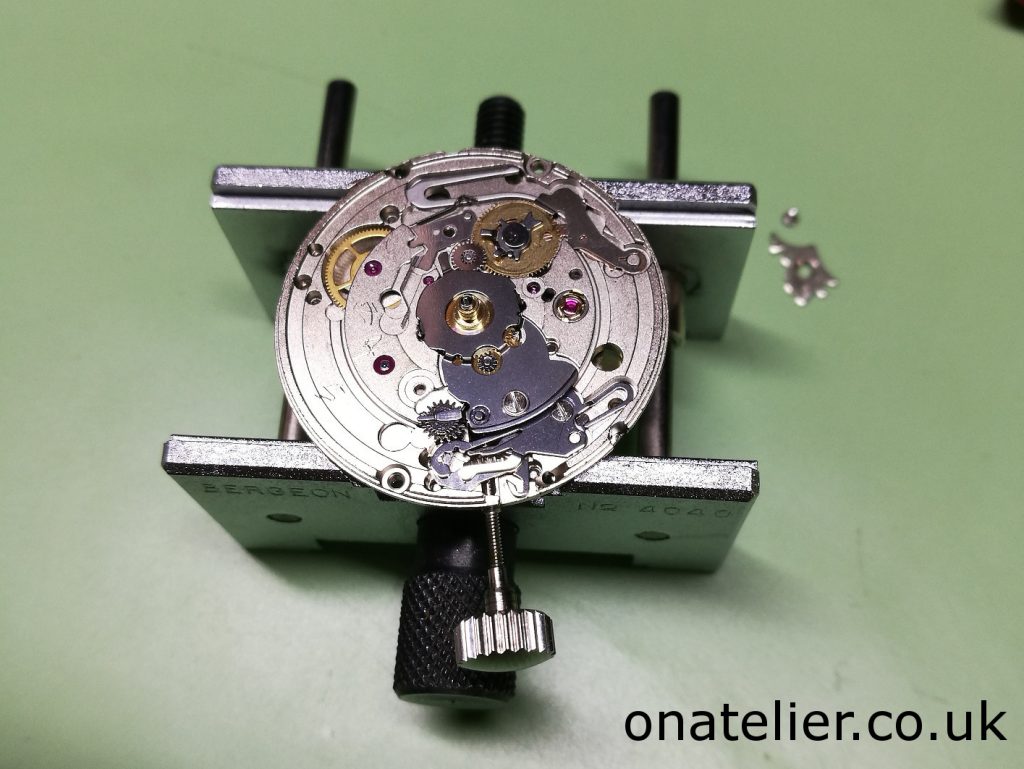 The watch is now fully re-assembled, with the exception of the automatic works and oscillating weight. 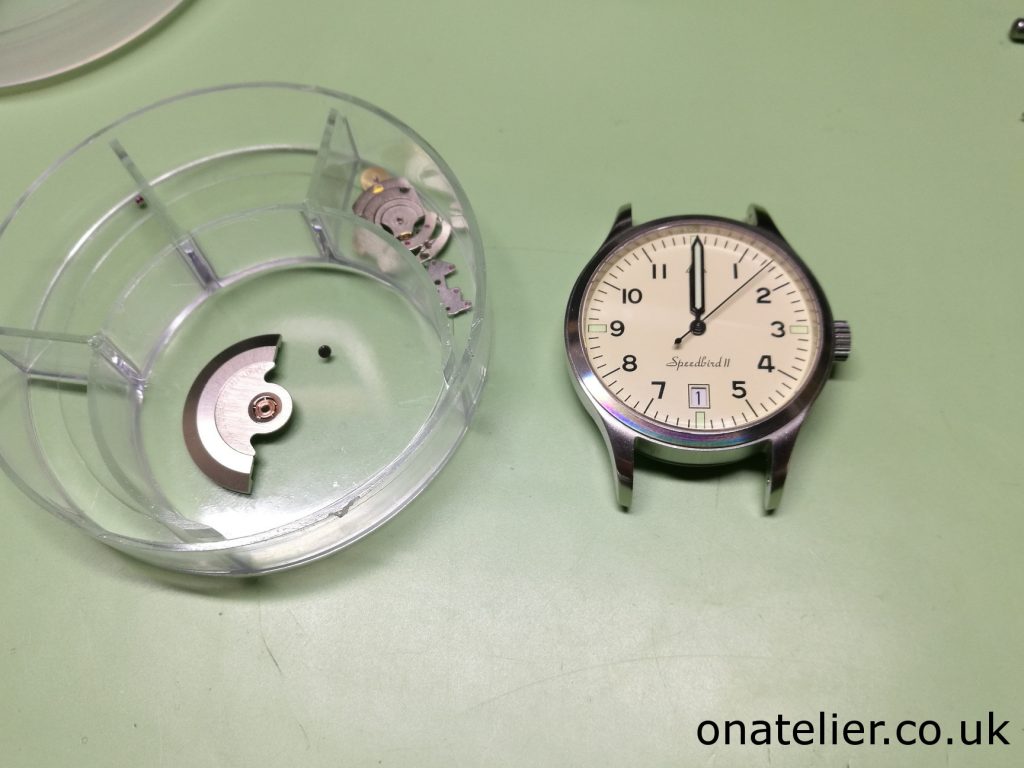 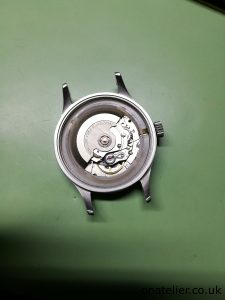 The movement is now fully assembled.

After testing, the watch is performing very well indeed. The balance wheel amplitude is above 300 degrees, exactly where I would like it to be. The rate is also very stable. The power reserve is also tested and found to be within spec, in fact slightly better, so the job is done.

This watch is a great example of the importance of observation and meticulous inspection during a service. If the issues highlighted had been overlooked and the movement simply cleaned and lubricated, the watch would have functioned, but would not have performed as well as it could. 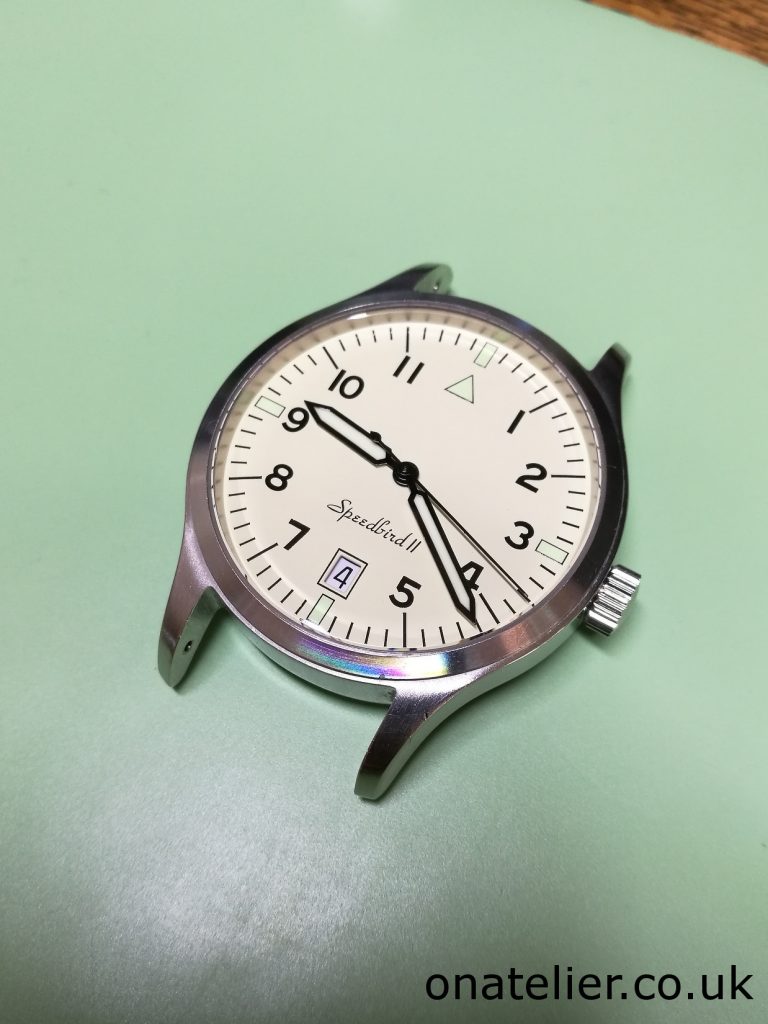 I would like to sincerely thank Anthony for allowing me to work on his Speedbird II PRS-7 and feature it on the blog, it was a pleasure to work on it.