Today I am featuring this Sandoz Submariner divers watch on the blog. The design of this model was clearly influenced by the iconic Rolex Submariner.

The watch is powered by an ETA 2836-2. This movement is part of the same family as the 2824-2 which I have featured several times on the blog . The difference being the Day / Date complication (the 2824-2 is just a date complication). 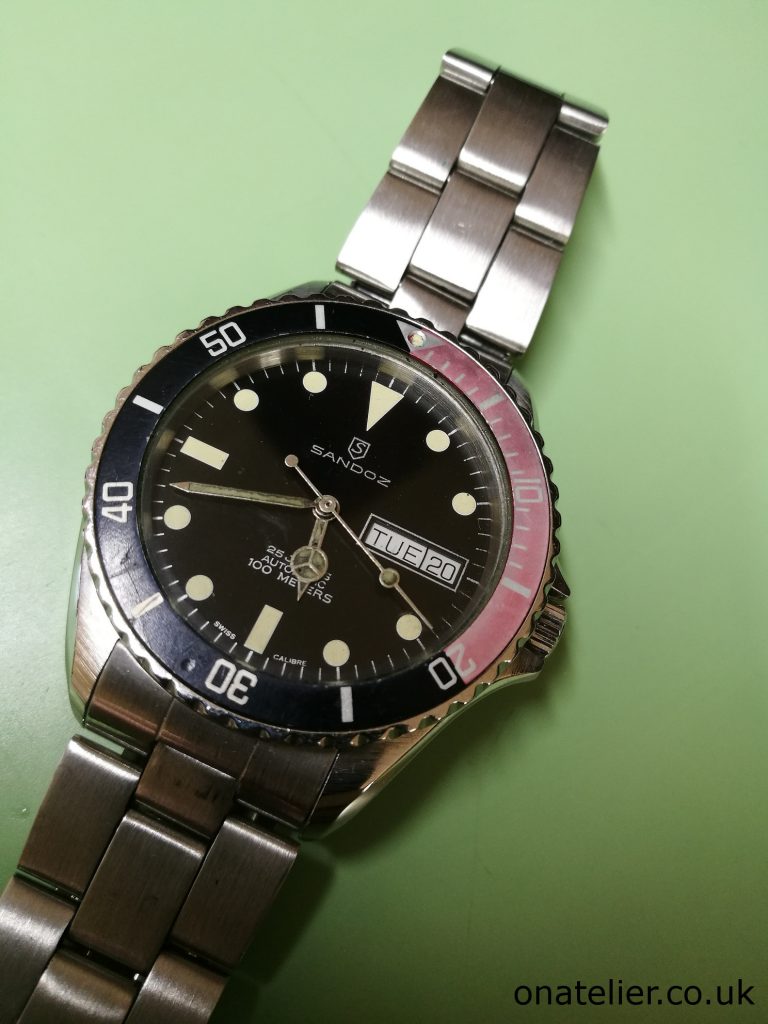 The watch runs but does not hack (the seconds hand does not stop when the crown is pulled). The hack feature is optional on this movement, but after looking into it, all the Sandoz “Submariner” I could find had a hacking function. So there is an issue with the stop lever, or it is missing altogether, time will tell. Either way I intend to address this as part of the service.

I start by removing the oyster style bracelet, and open the case. I am greeted by the ETA 2836-2 movement. The oscillating weight is nicely finished with perlage, and it is signed Sandoz. 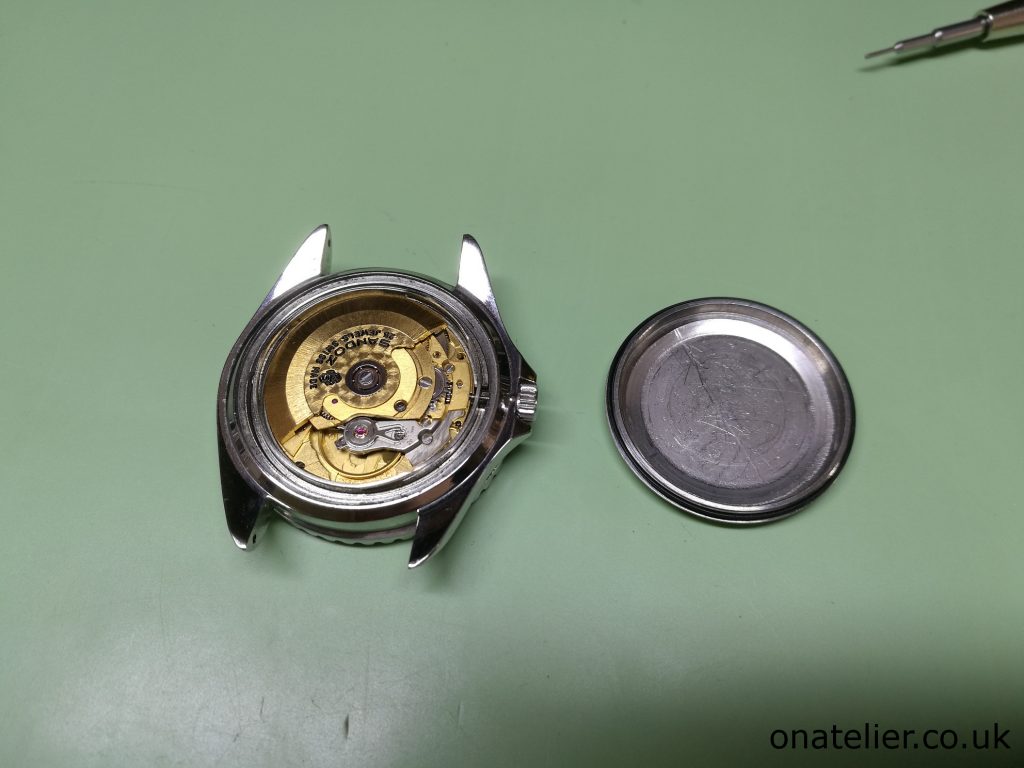 I then remove the automatic works. Notice the different colour plating of the balance cock, it is also heavily scratched, and the antichoc system (by Novodiac) does not match that of the other side (by Incabloc). So the original must have been replaced with this non matching part at some point. Not really an issue, appearance aside, as the assembly is perfectly functional. 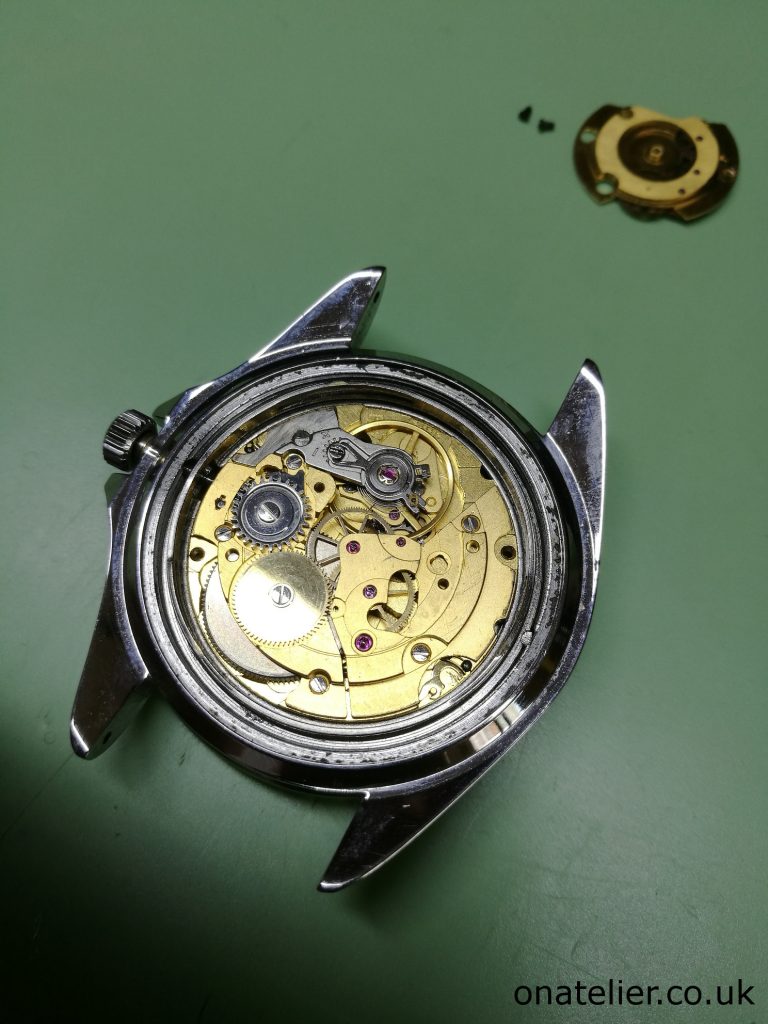 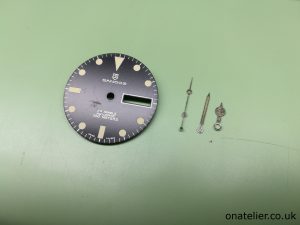 The hands and dial are removed, carefully I must add, to avoid marking the dial (you can see a mark on the dial just above the 25 jewels print, caused by someone else’s previous intervention). 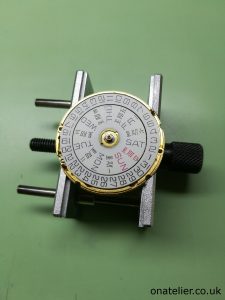 I then start with the bottom plate (dial side) of the movement. You can see the day complication caters for two languages, in this case English and Chinese.

The day wheel is removed, exposing the bottom plate layout. 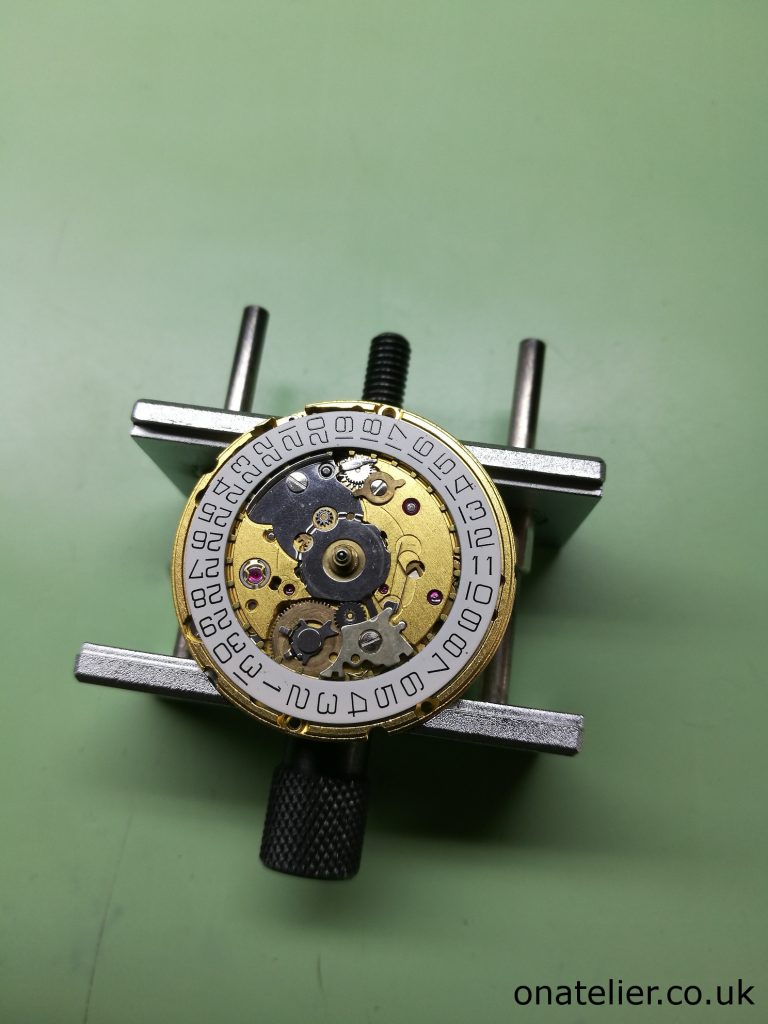 I start by removing the minute train bridge, hour wheel, minute wheel, and some of the calendar mechanism. 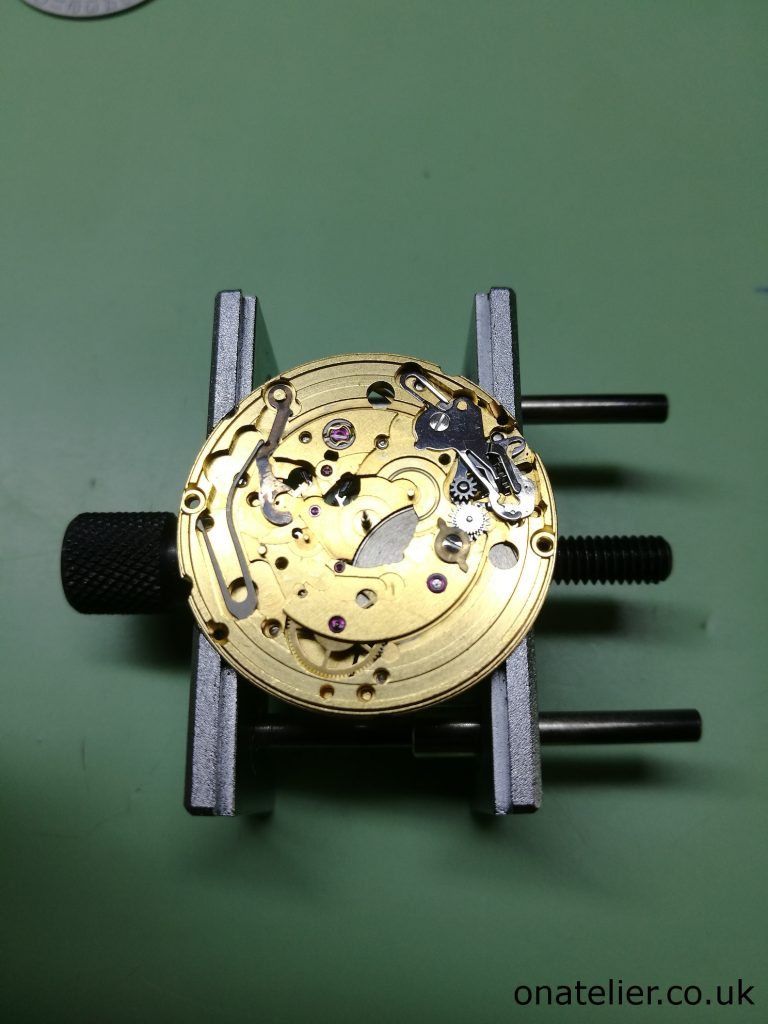 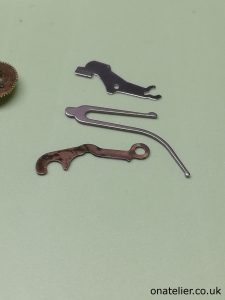 Note the marks on the date unlocking yoke. 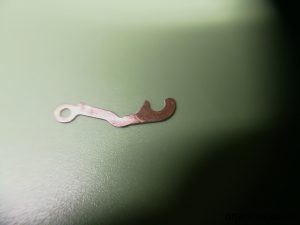 I give it a polish and clean.

I progress with the disassembly of the components associated with the keyless work. 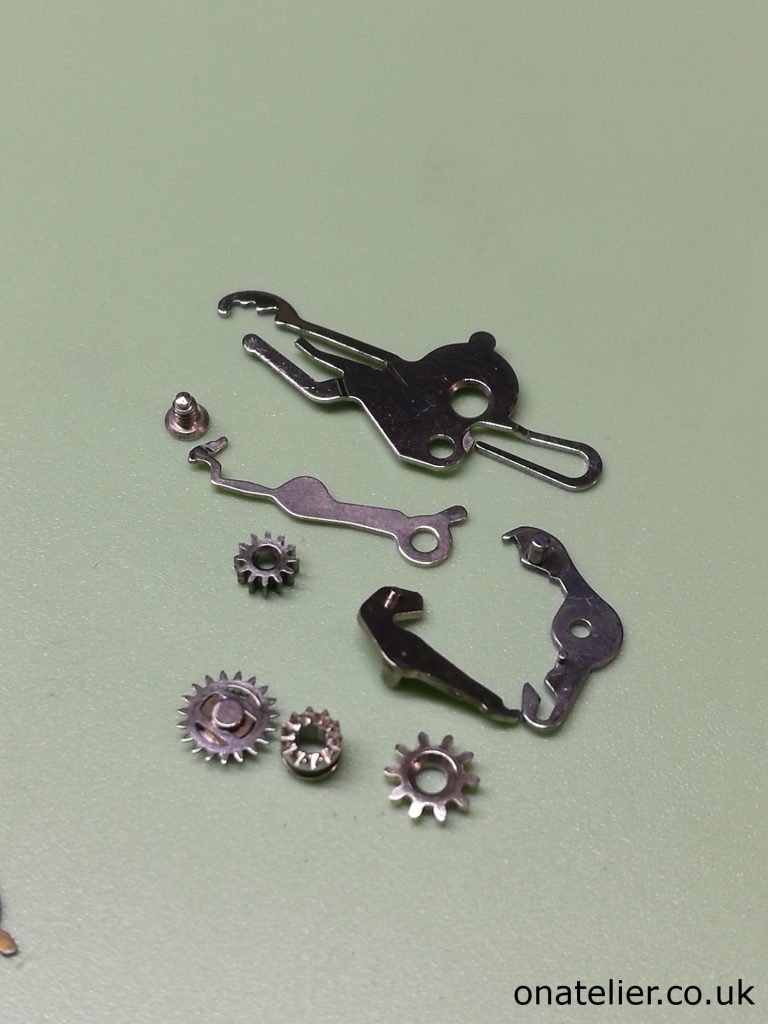 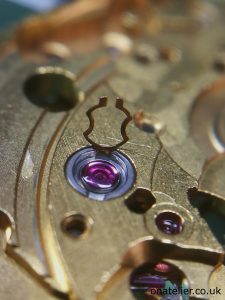 And the last thing I do on this side of the movement is to release the incabloc spring and take out the balance cap jewel and setting.

I then move on to the top side of the movement. I have already removed the ratchet wheel and crown wheel. 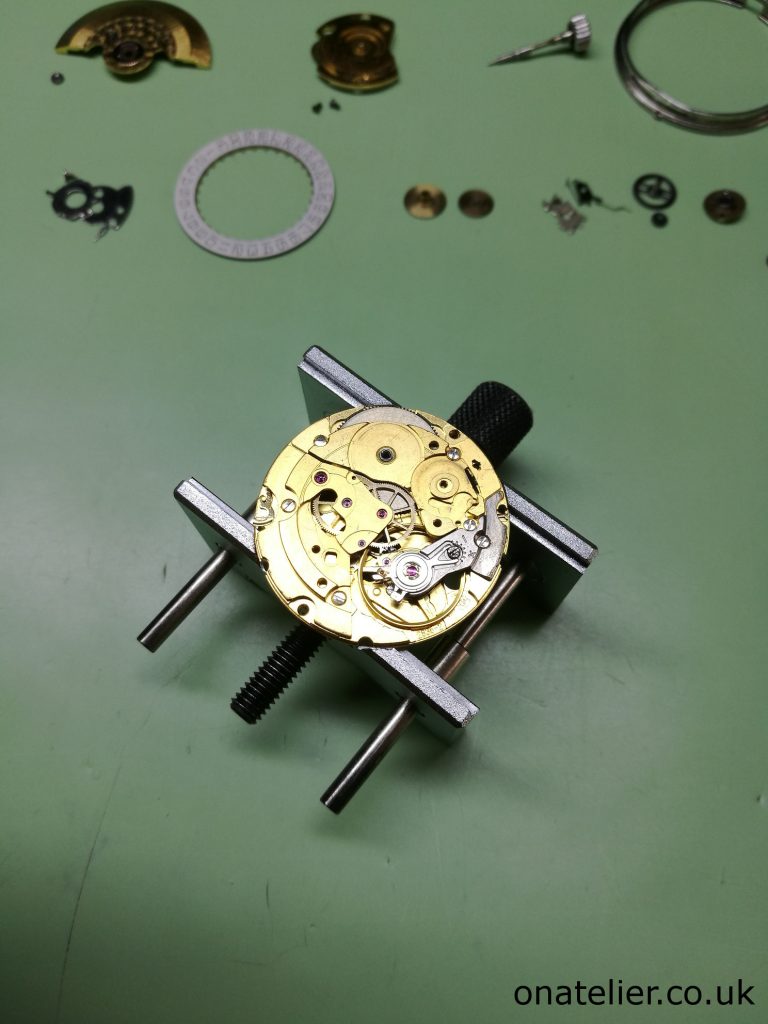 The balance and pallet fork are removed, and I take out the train bridge exposing the wheels. 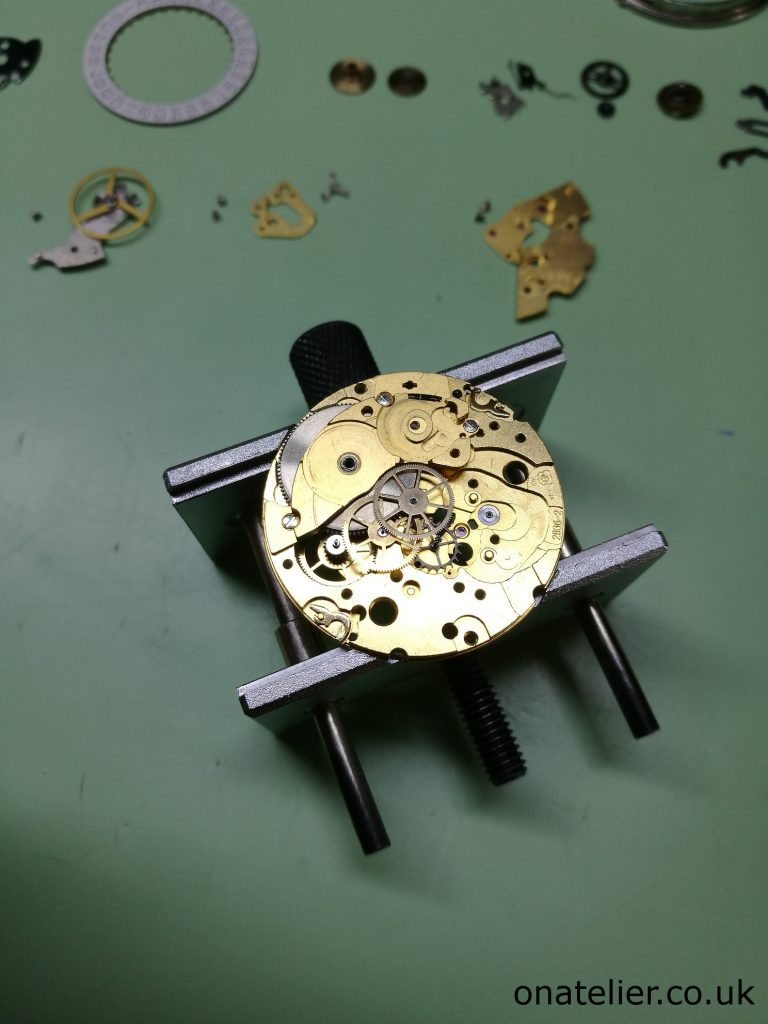 And I finish with the topside. As expected, there was no stop lever. Not an issue as the part is readily available so I place this on order, and proceed with the rest of the service. 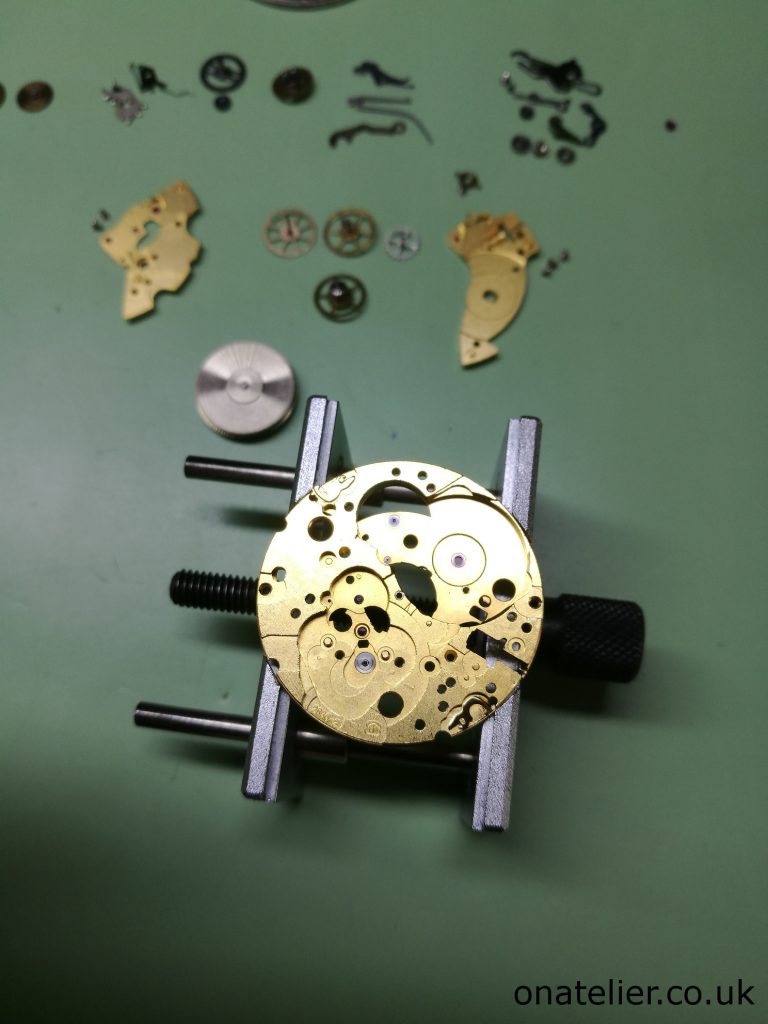 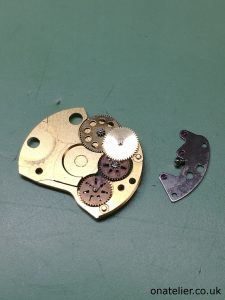 I then disassemble the automatic works.

I strip the mainspring, the barrel has a lot of dry dirt in it, definitely not what you want for a good power delivery. 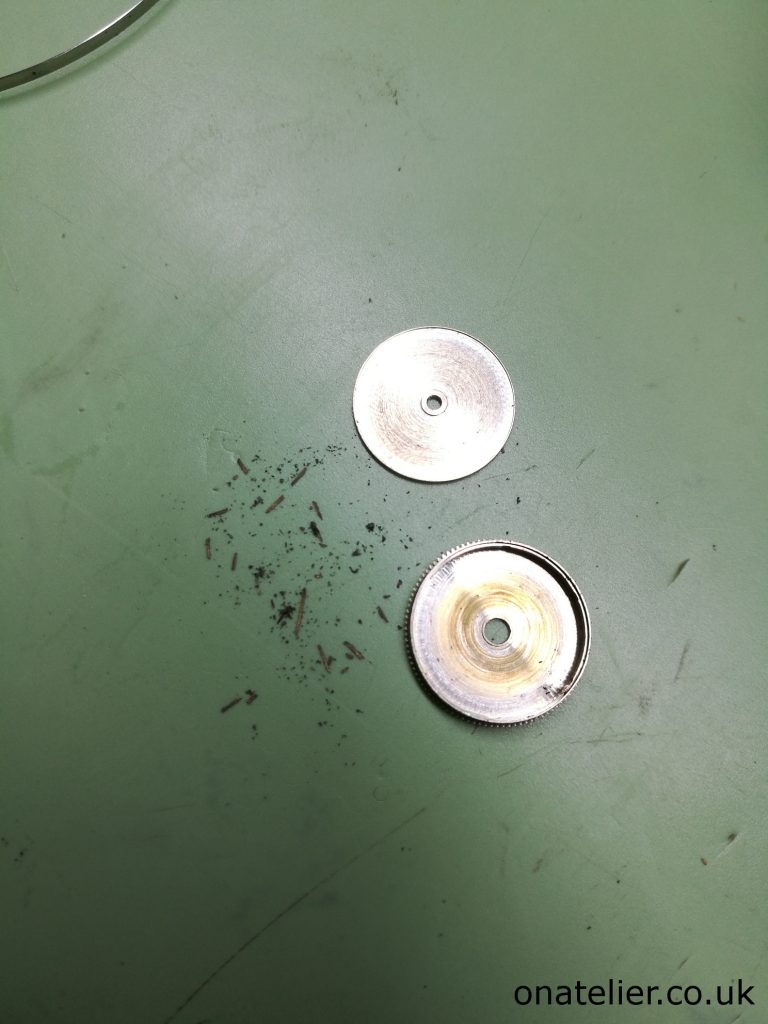 And here it is, the movement is now fully disassembled. 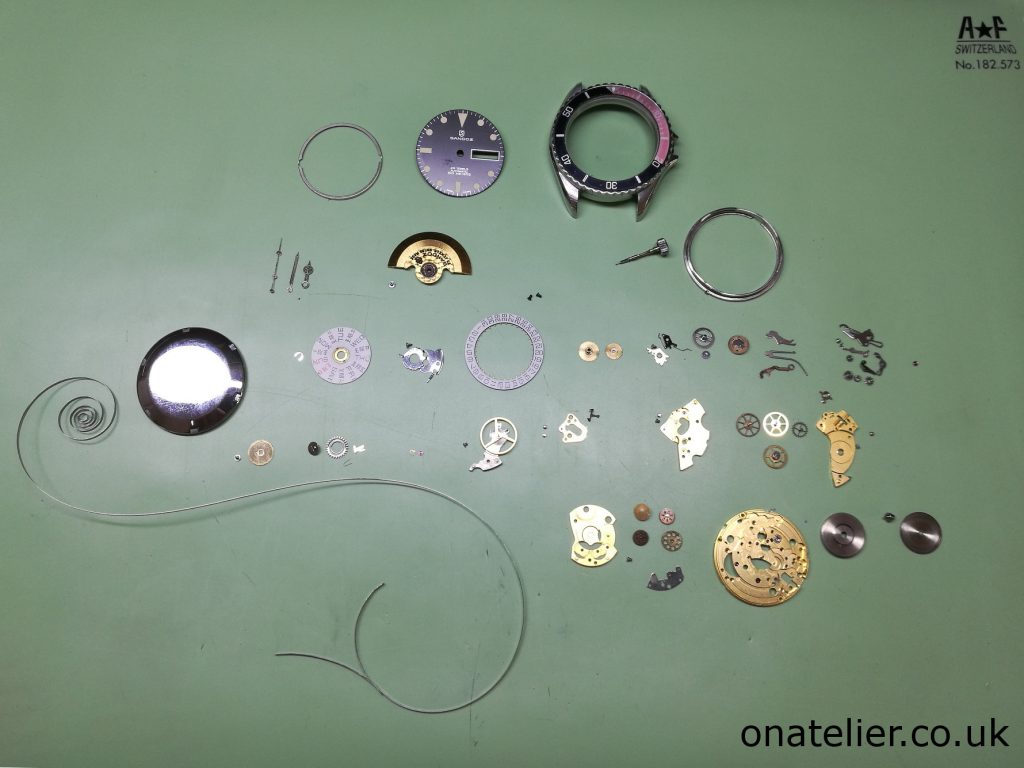 The parts are ultrasonically cleaned, and I am ready to proceed with assembly. 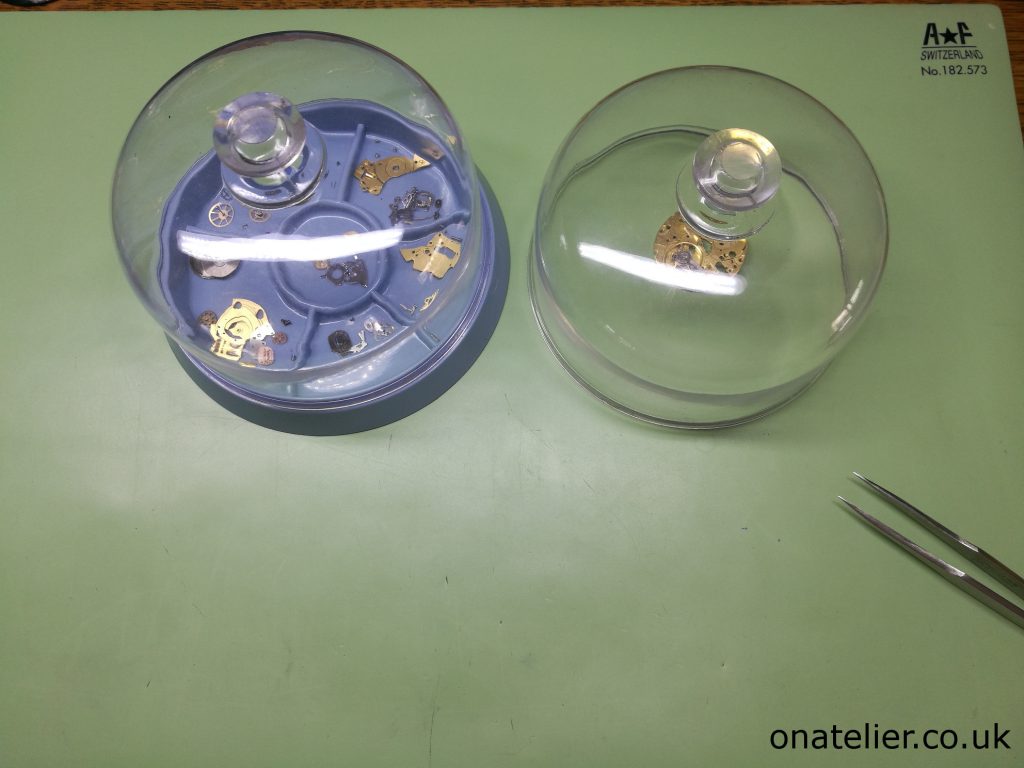 I always lubricate and reinstall the cap jewels first. 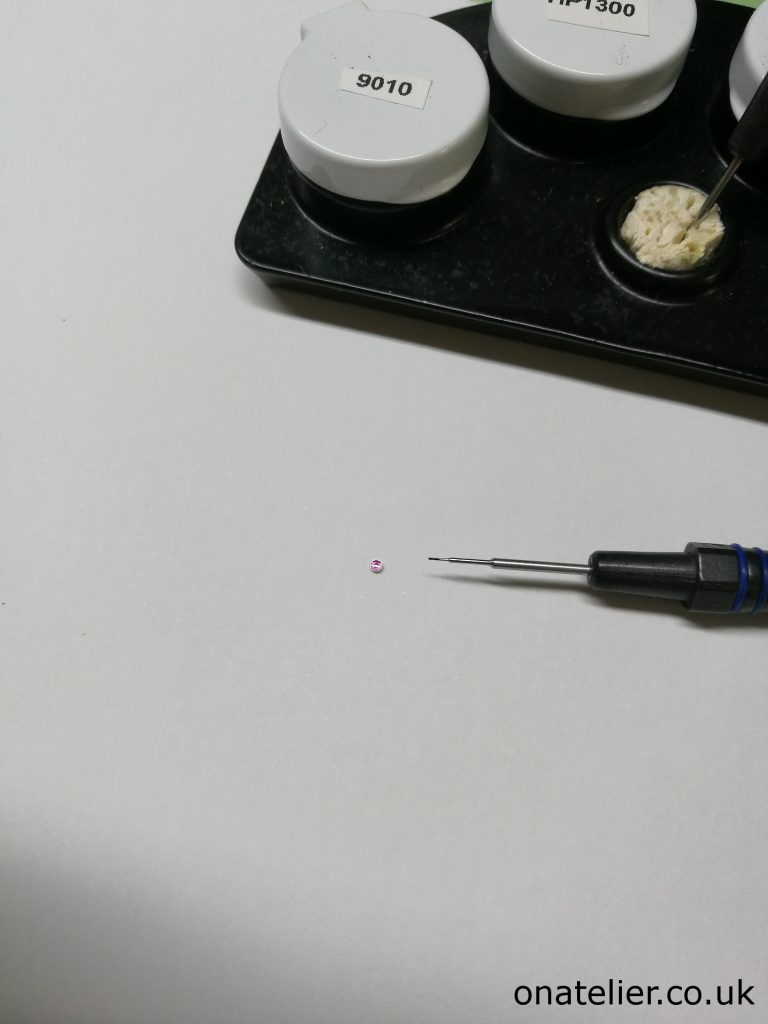 I then reassemble the mainspring and barrel, and place the associated bridge back on. At this stage, I have not yet received the missing stop lever, which would fit under the bridge. I proceed further anyway. The layout of the ETA 2836-2 is such that the bridge can be removed easily with the movement fully assembled later. 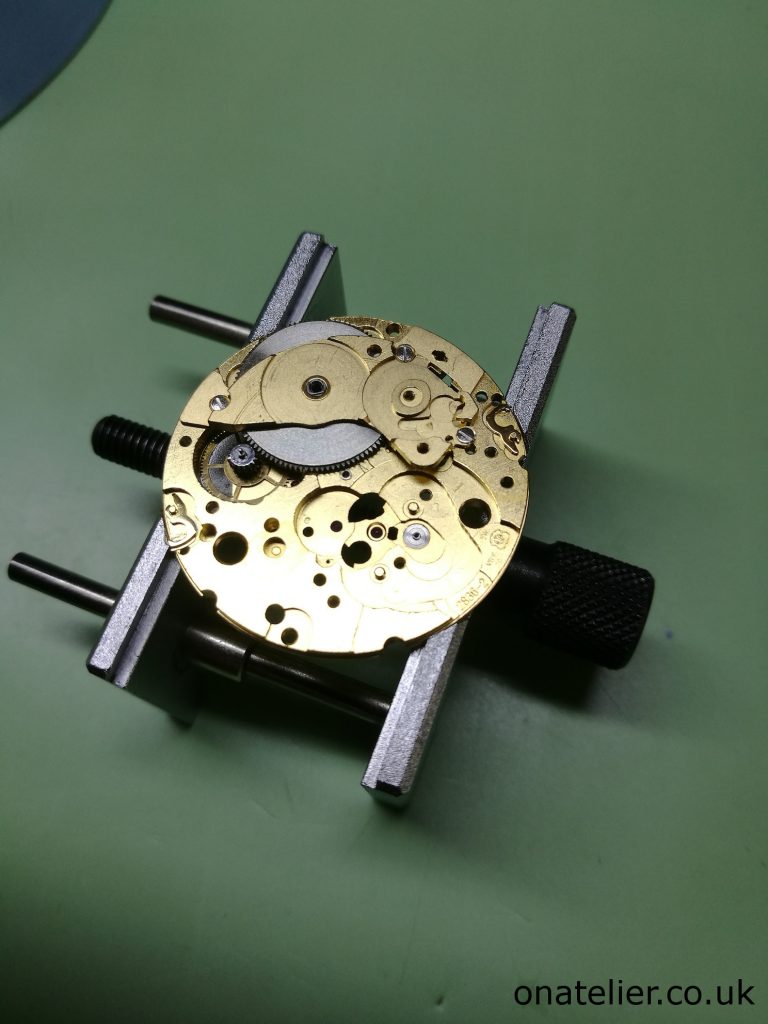 I install the keyless work. 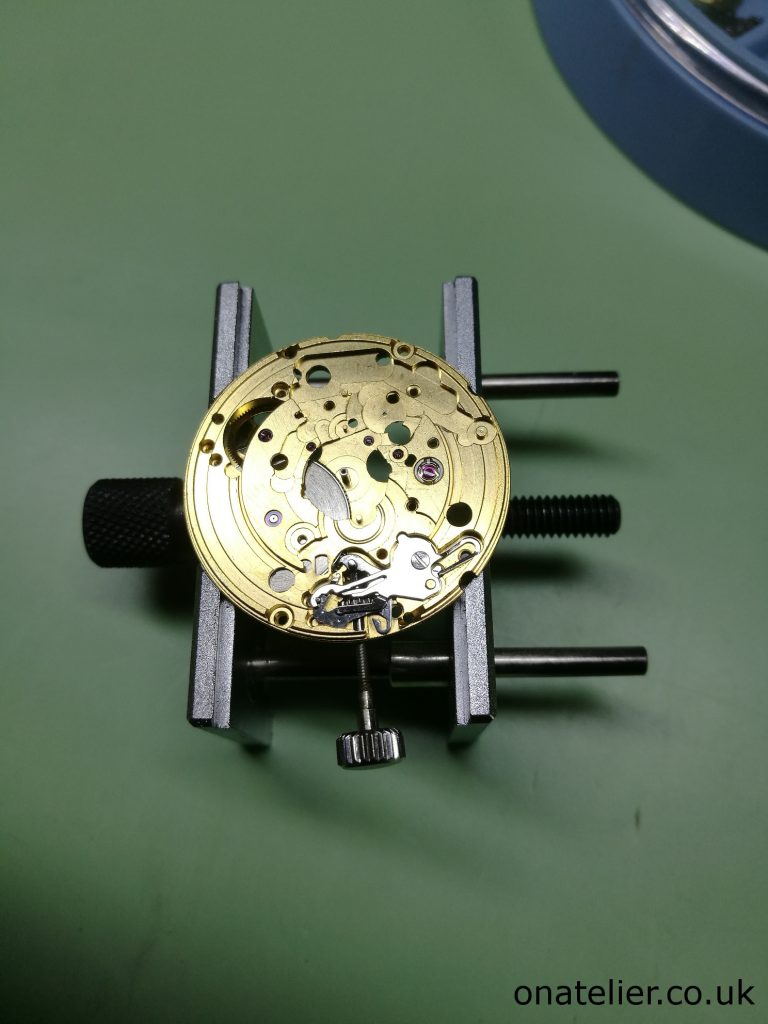 The intermediate, third, fourth and escape wheels are back in their respective pivot holes. 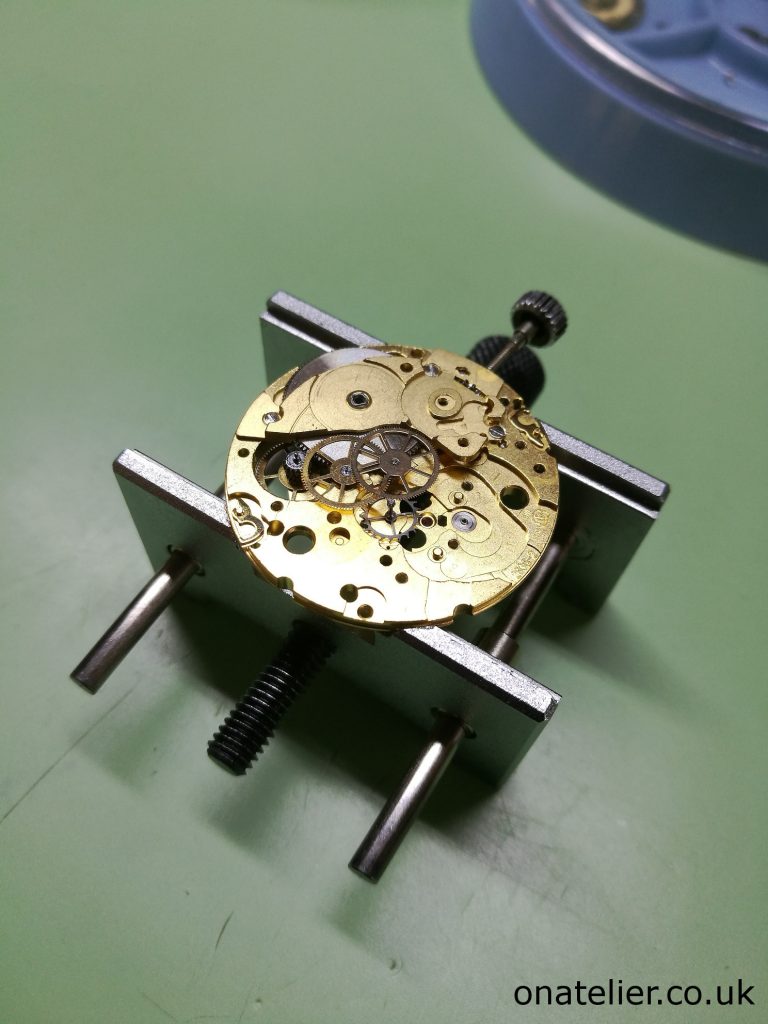 Train bridge, ratchet wheel and crown wheel are fitted, including the click mechanism. After testing that the train is functioning as expected, I install the pallet fork. The next step (not pictured) will be fitting the balance wheel, and the movement can be tested and regulated coarsely. 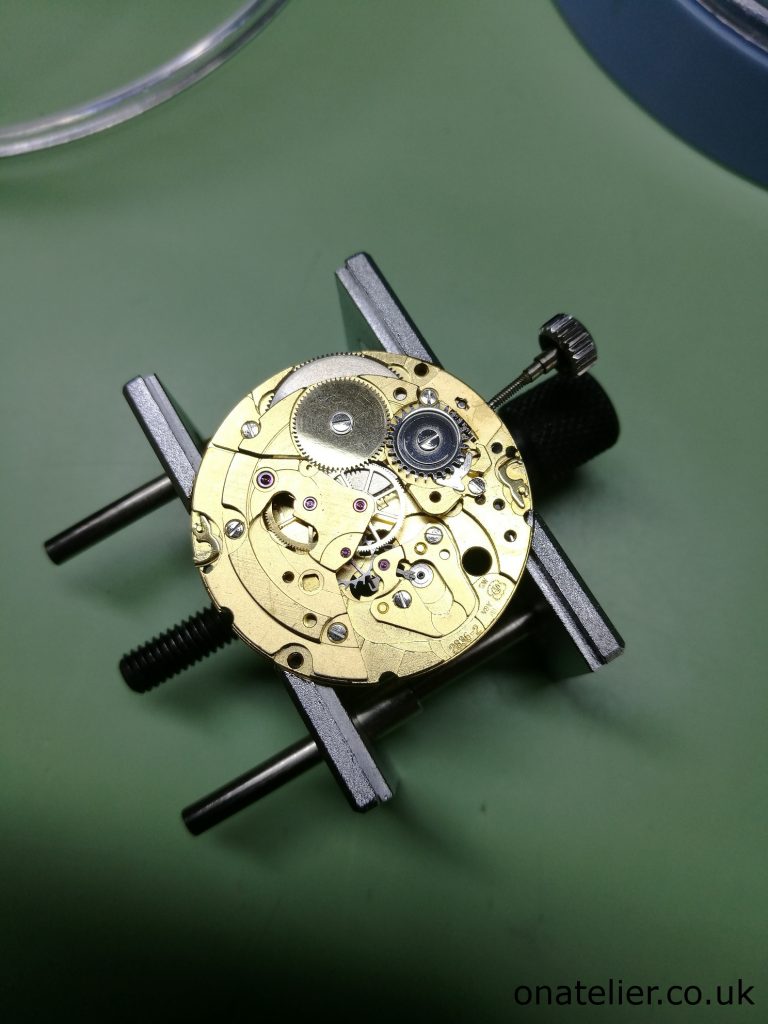 All is well, so I now work on the dial side. 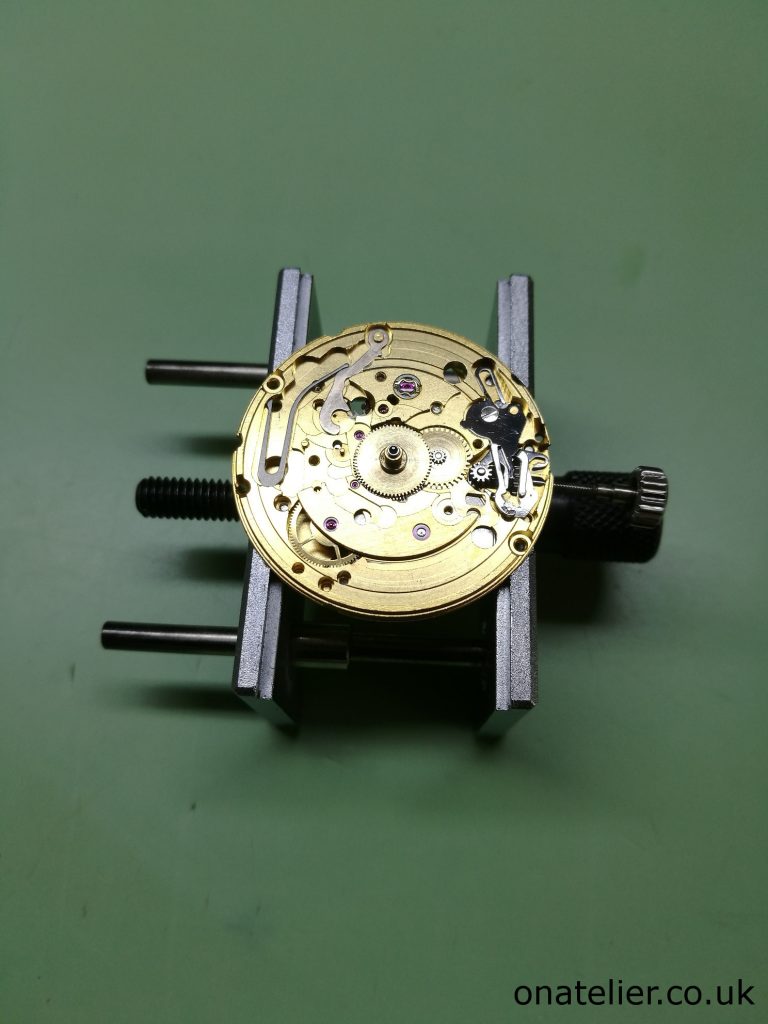 Nearly complete, with the calendar works fitted, we are just missing the date indicator disc and its spring clip. 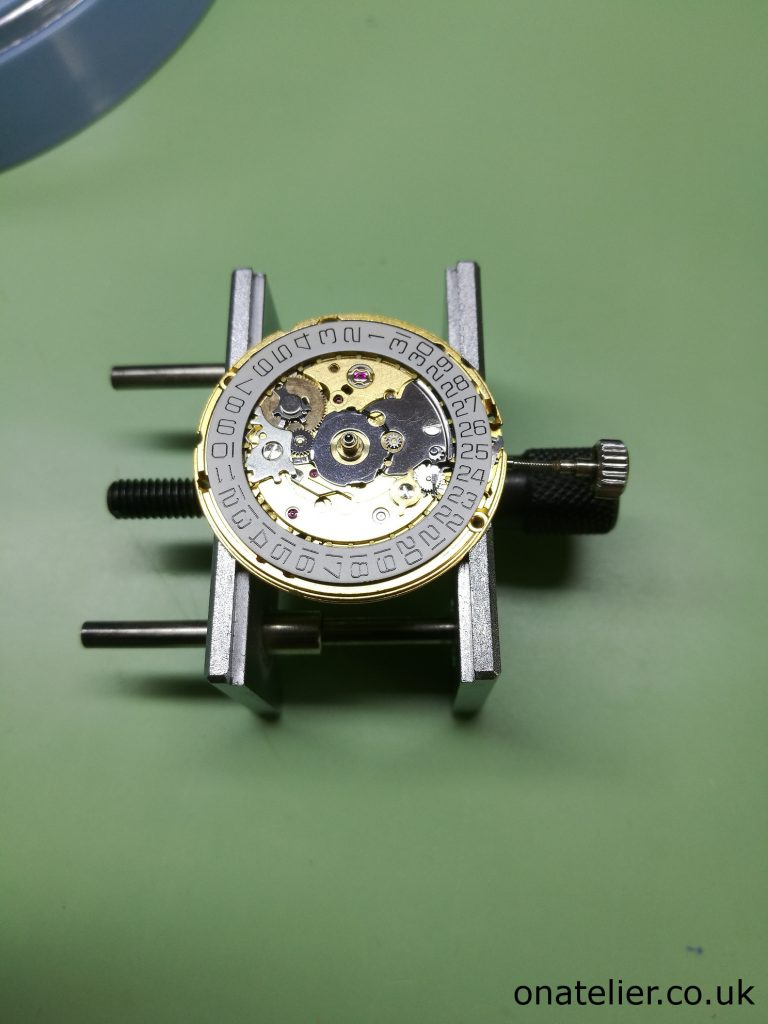 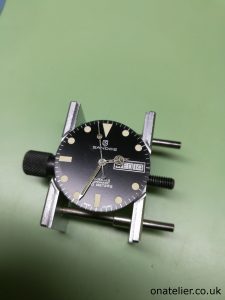 The dial and hands are fitted back on the movement. For now I am completing the assembly of the watch.

After a short interruption in the proceedings, I have now received the missing stop lever. I remove the automatic works and barrel bridge to fit it. 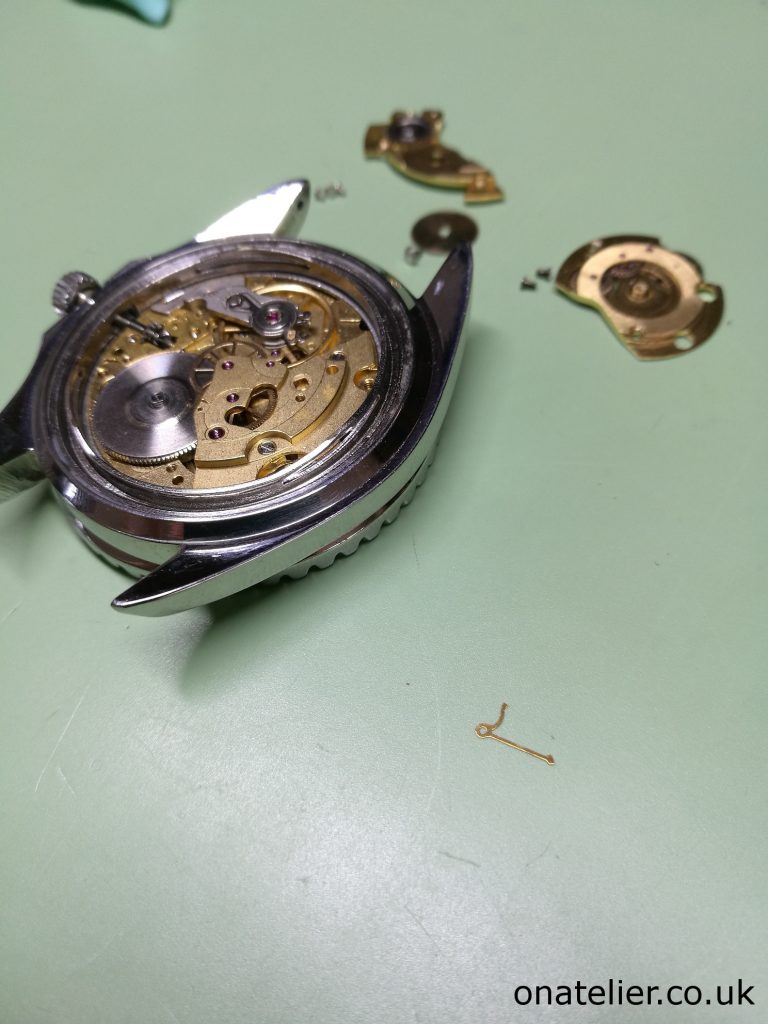 The movement is now complete, and working as it should after final regulation. It has responded very well to the service. The amplitude of the balance is back where it should be, and the rate of the watch is excellent and consistent. So I finish by fitting and lubricating a new gasket in silicone grease and resealing the watch. 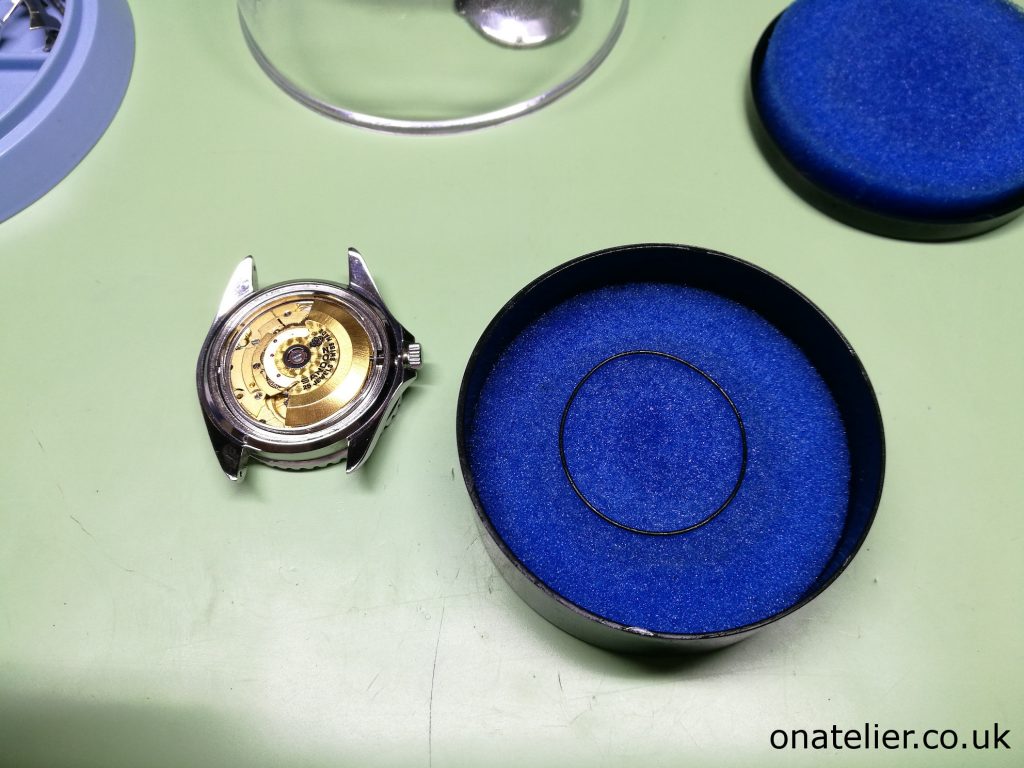 I give the steel bracelet a light polish, and reproduce the original brushed finish with an abrasive wheel on my polishing lathe. I leave the case untouched. This really makes a lovely vintage divers watch! 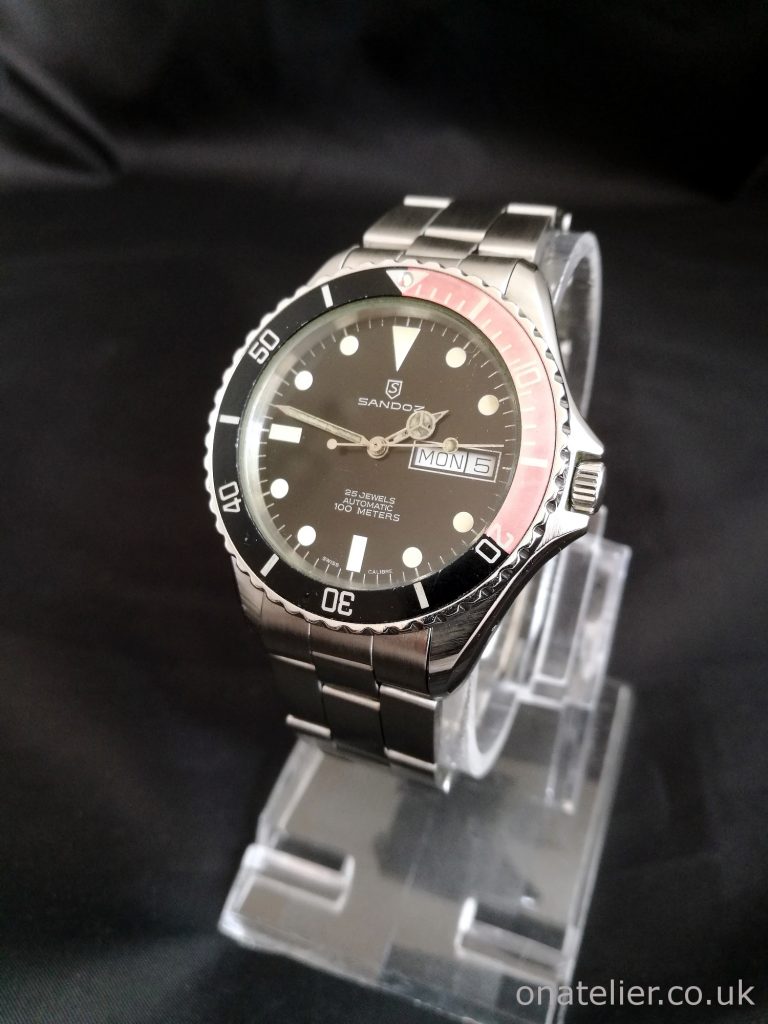