Silas sent me this rather lovely Cyma Navystar watch for a service. He reported very poor timekeeping (about  20min/day fast) and the crown did not sit flush against the case, so the watch was definitely in need of attention.

The watch is powered by Cyma’s calibre R.459, which uses the interesting antishock device called “Cymaflex”, more on that later. 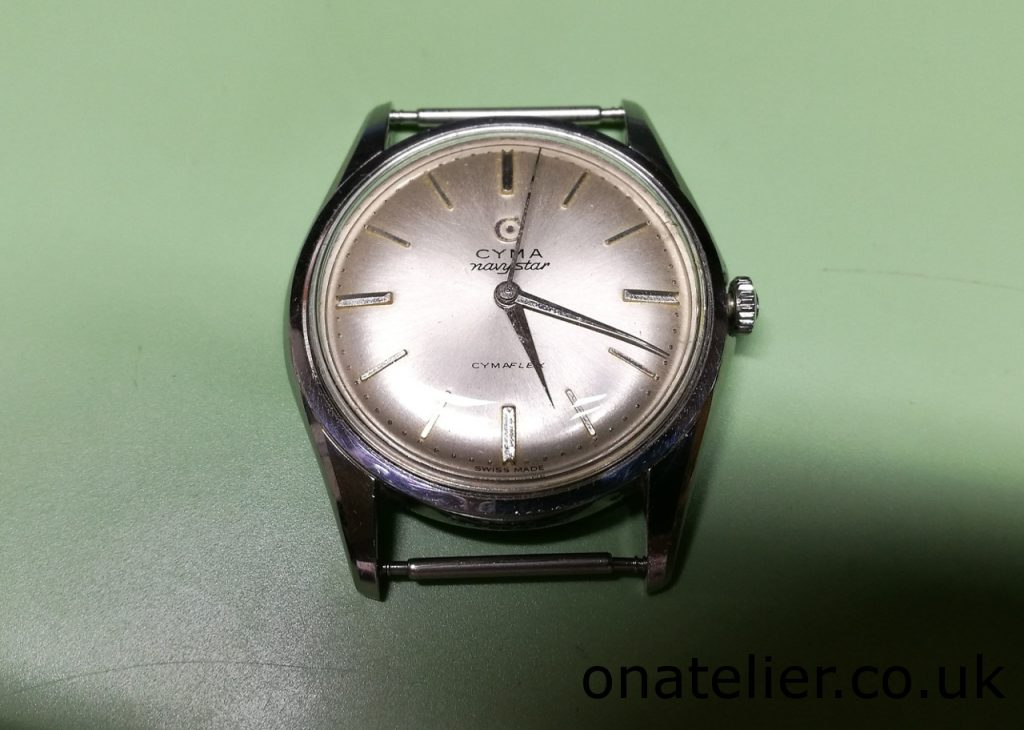 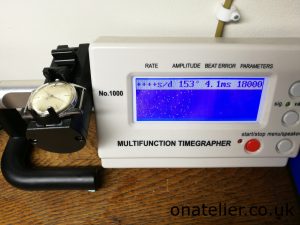 I placed the Cyma Navystar on the timegrapher before commencing the service, and I could not get a reading, so something was not right.

Opening the caseback reveals the very nice Cyma R.459 movement. As you can see it is an indirectly driven sweep second design, the wheel driving the sweep seconds pinion is mounted on an extended pivot of the third wheel. In simple terms this means that the seconds pinion is not transmitting power from the mainspring to the escapement as part of the train of wheels. Instead it is driven “outside the train” by the third wheel. 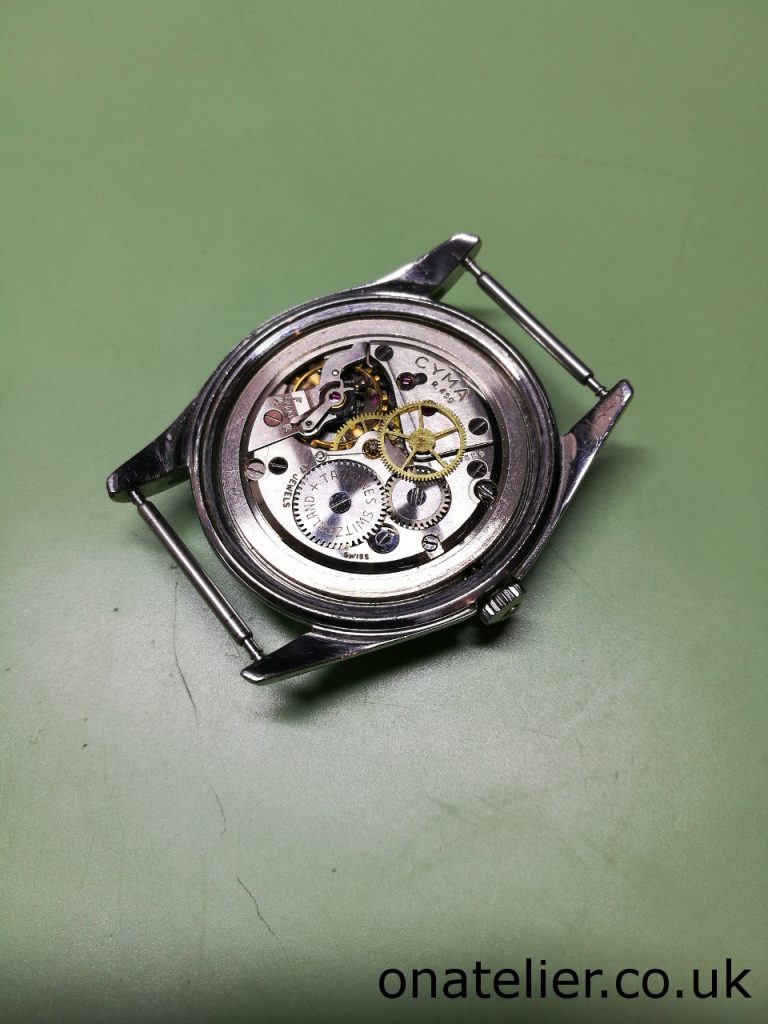 We can now take a look at the lower side of the movement after removal of the dial and hands. You can see the two anti shock settings and springs on the escape and balance wheels, an interesting and different approach to shock resistance devices. 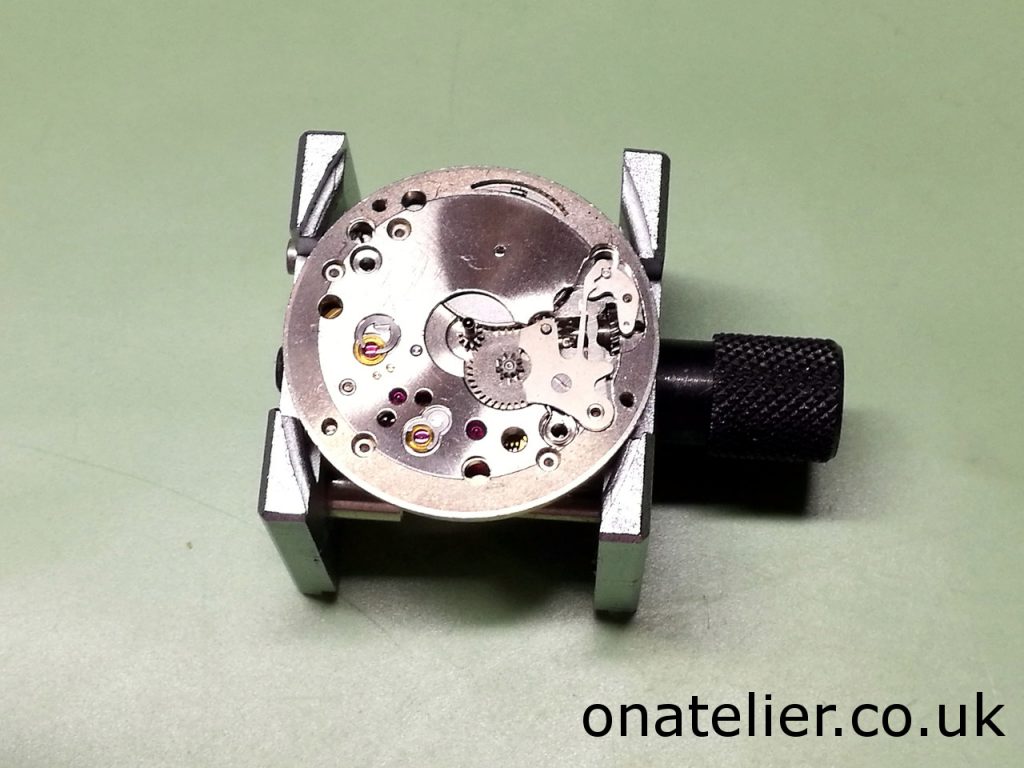 And taking another look at the upper side of the movement, you can now see the two anti shock devices on the balance and escape wheel. The jewel on the balance is retained by a pivoting arm, very novel indeed, but quite easy to work with. 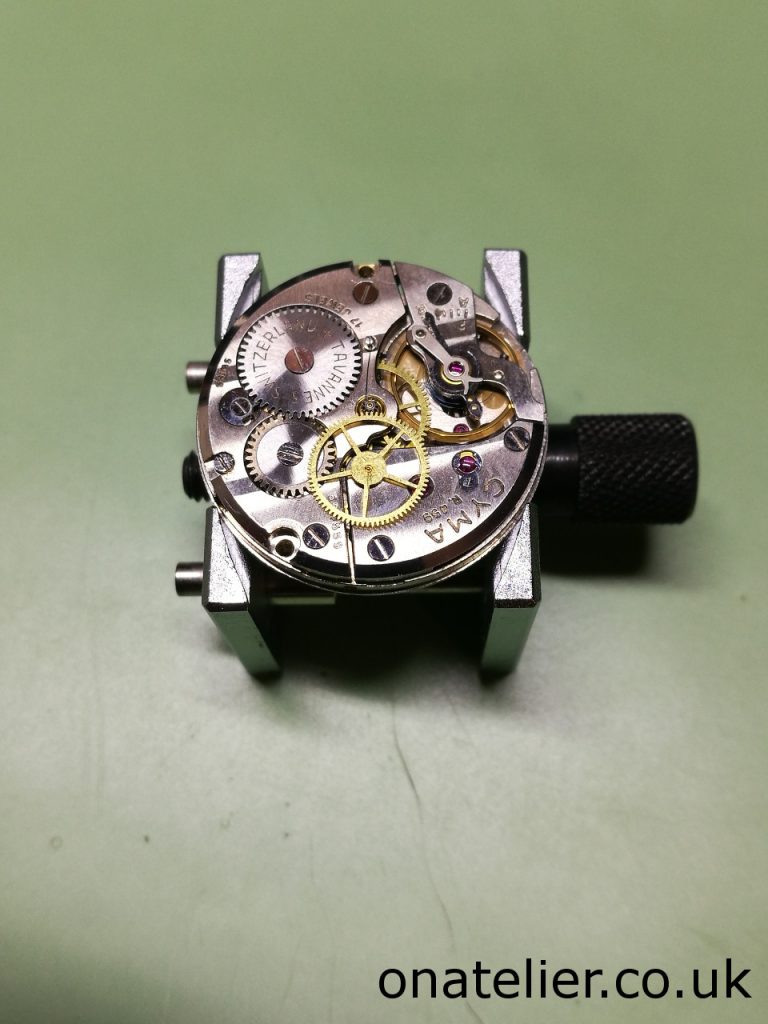 I soon have the whole movement stripped out ready for inspection of the parts and cleaning . 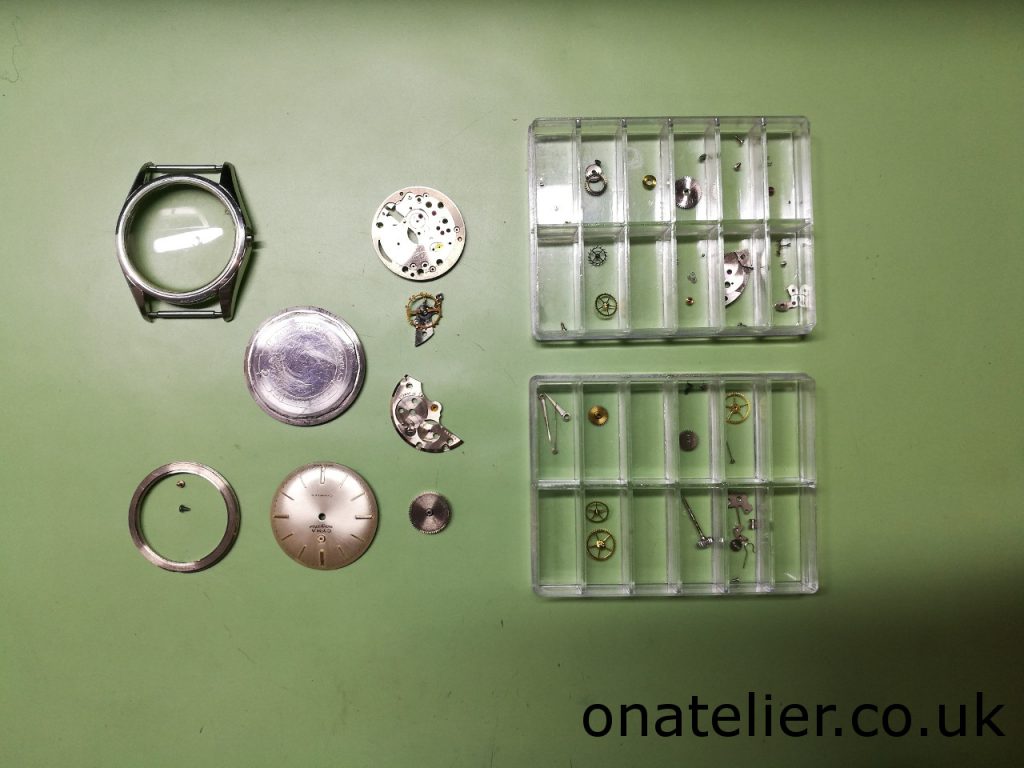 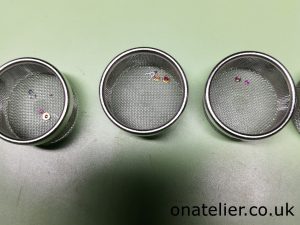 The antishock settings and jewels are also stripped down to give them a proper clean in the ultrasonic machine. 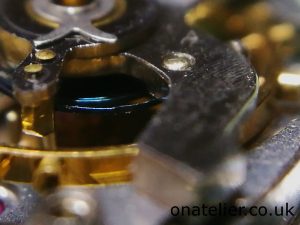 During the strip down, I figure out why the watch is performing so poorly.

The hairspring is out of truth and is rubbing against the balance bridge, hence the very fast rate Silas observed during use: this drastically reduces the effective length of the spring. There are signs of previous manipulations of the hairspring, which clearly were unsuccessful! 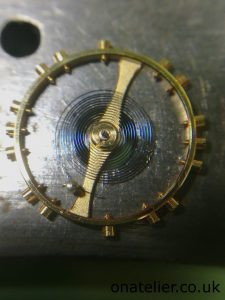 Mainspring repairs are particularly tricky, but there was little to lose in this case, so I manipulated the hairspring to make it sit in a plane parallel with the balance again. 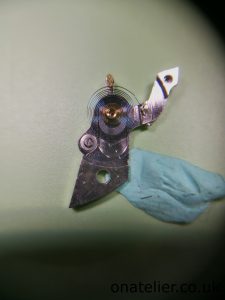 Once this was done, I remove the hairspring from the balance, and further tweak the spring to ensure the collet is perfectly centred with the axis of the balance wheel. With all of this completed the balance assembly is ready to be put back together and to be cleaned with the rest of the parts.

Prior to re-assembly I notice another issue: the third wheel has a bent pivot. This could poor power transmission in the train, and also will mean that the driving wheel of the sweep second will run out of truth, so this really needs to be sorted. 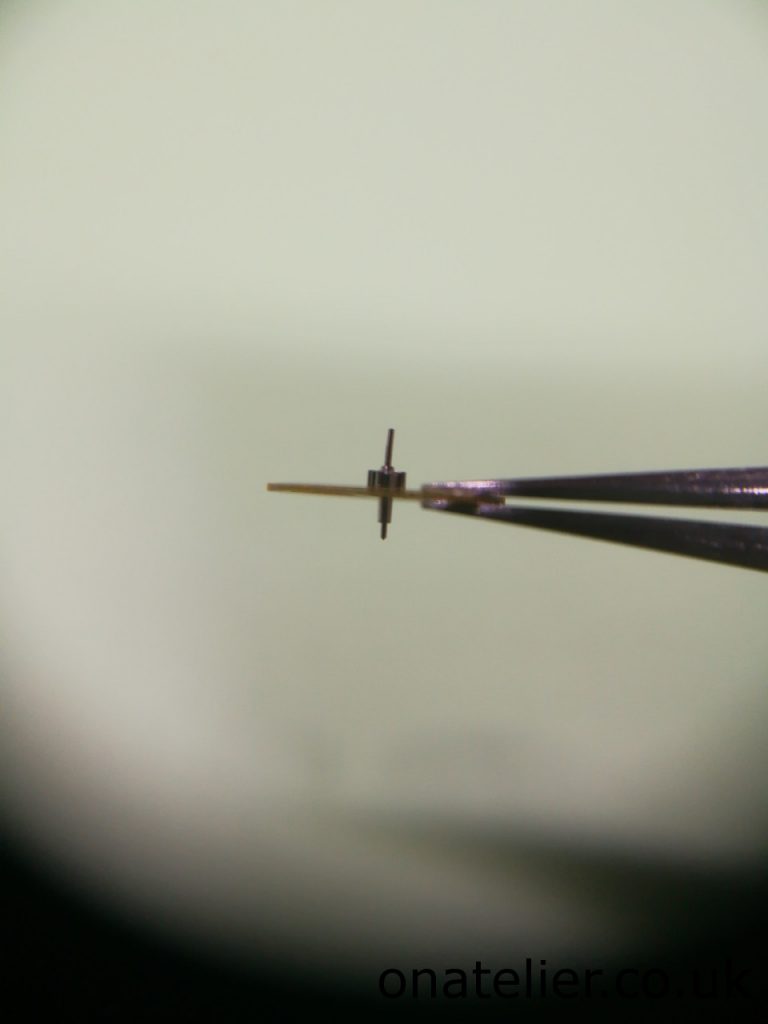 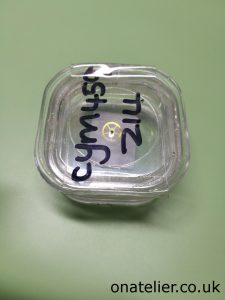 Thankfully I was able to source a replacement.

After fitting the new wheel I notice the train is not running as freely as it should, the endshake on the third wheel needs to be corrected (it is the play between the wheel and its two jewels). I use my jewelling tool to increase the endshake, just one or two hundredths of a millimetre is sufficient to make things run smoothly again. 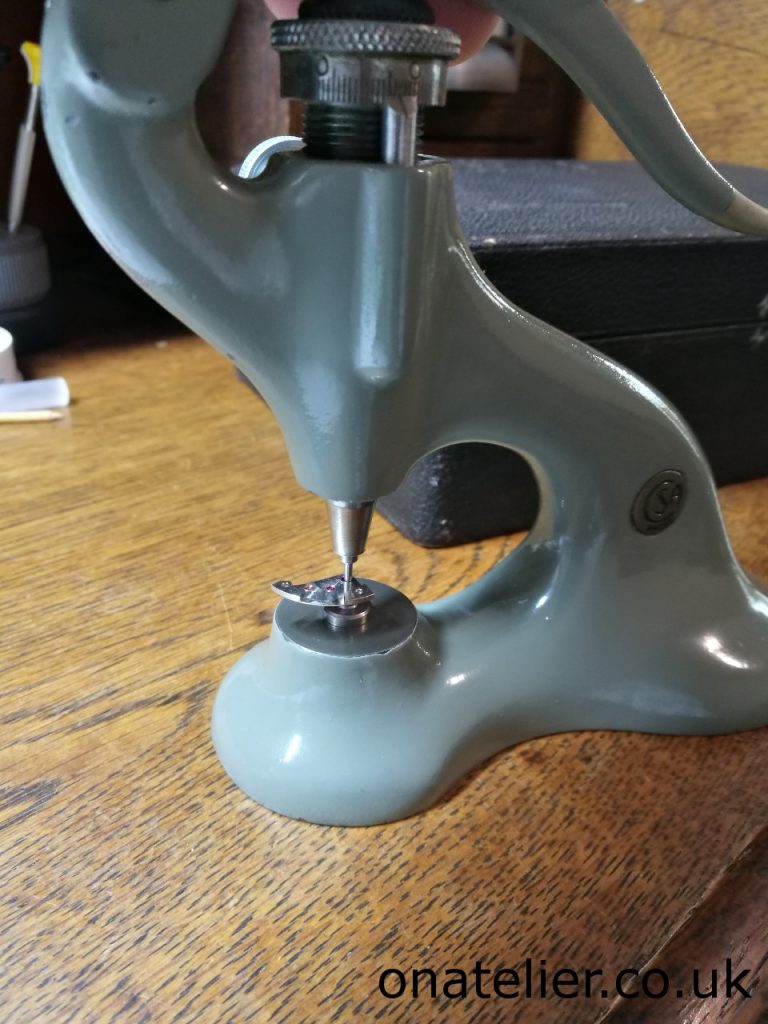 With all the issues resolved and out of the way I can commence final assembly and lubrication of the movement. I start by fitting the Cymaflex antishock settings, jewels and springs. 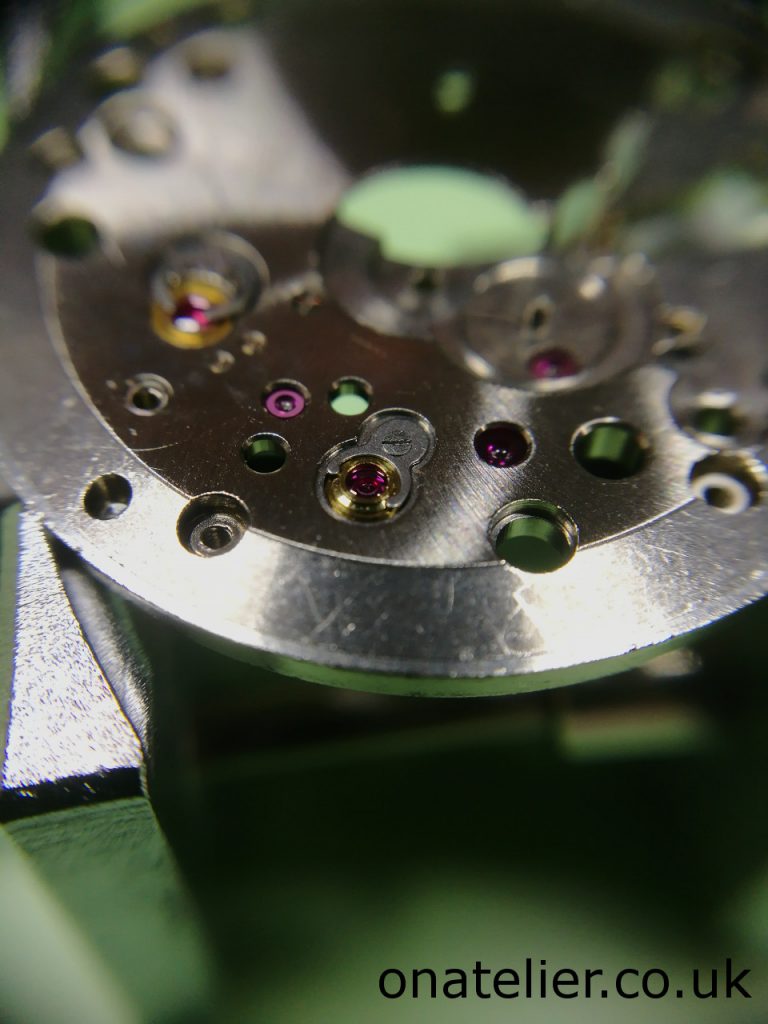 A close up on the balance antishock system and its pivoting arm. Pretty different! 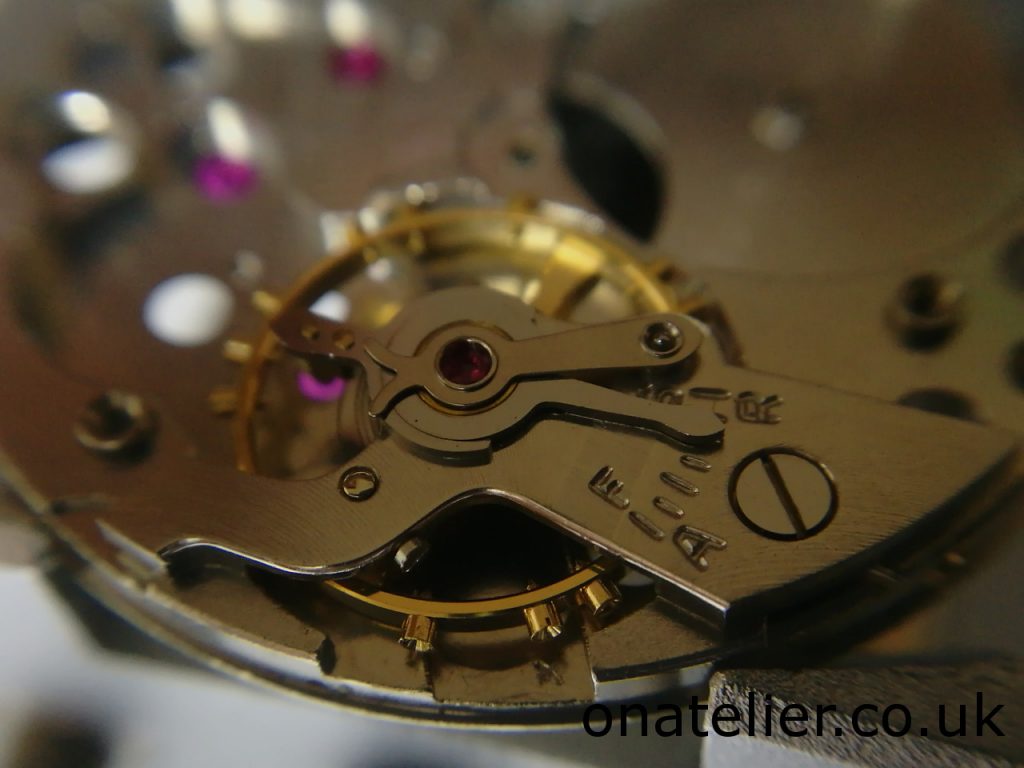 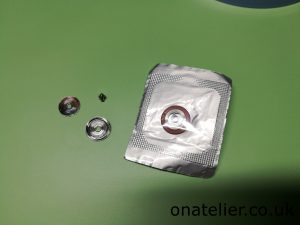 I fit a new mainspring in the barrel.

The train wheels are installed. 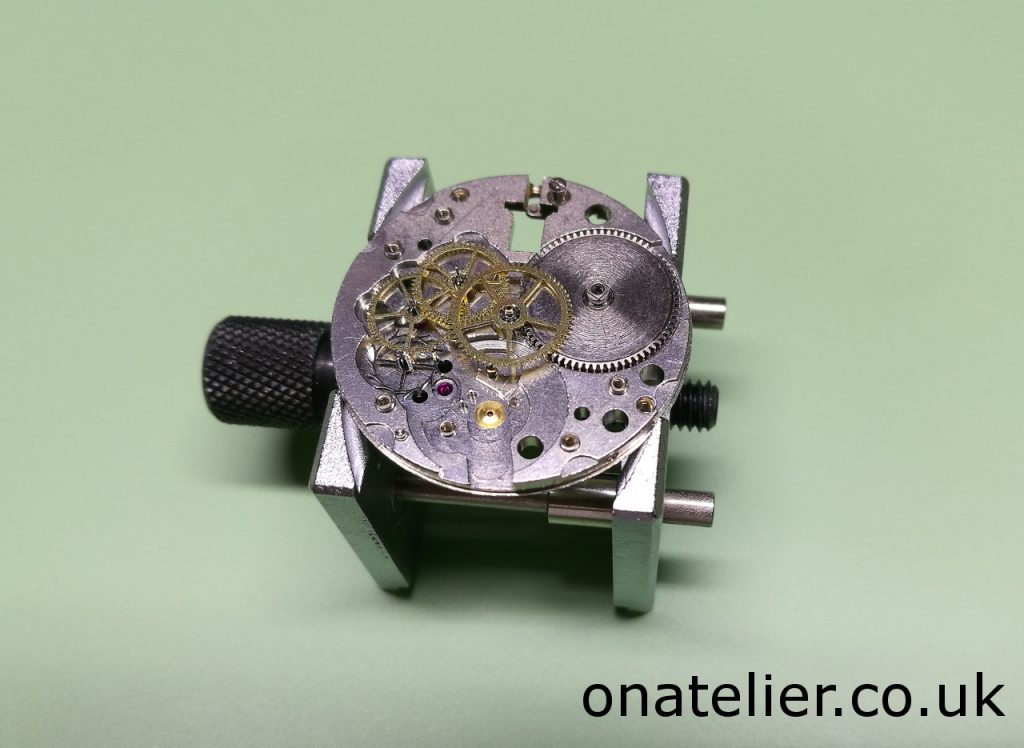 The train bridge and barrel bridges are now in place, waiting for the ratchet wheel, crown wheel and escapement to be fitted. 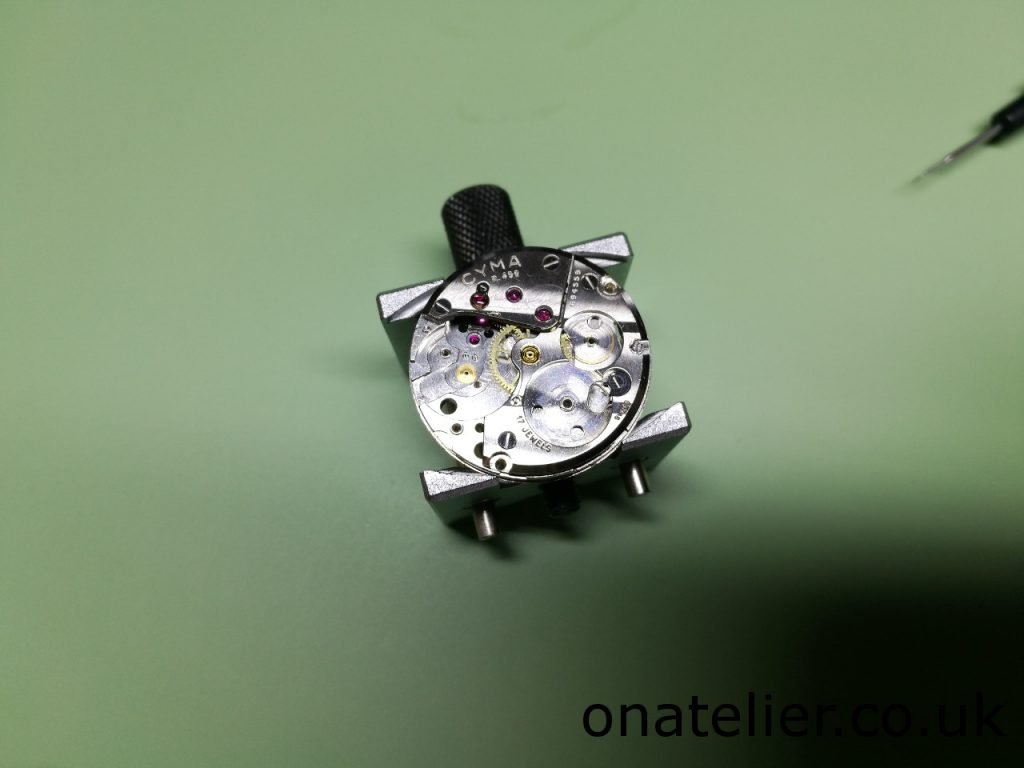 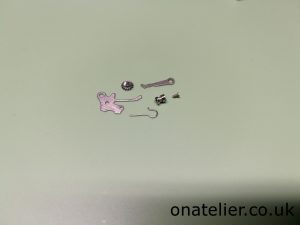 Moving to the other side, I install the keyless work.

And then complete assembly with the motion work. 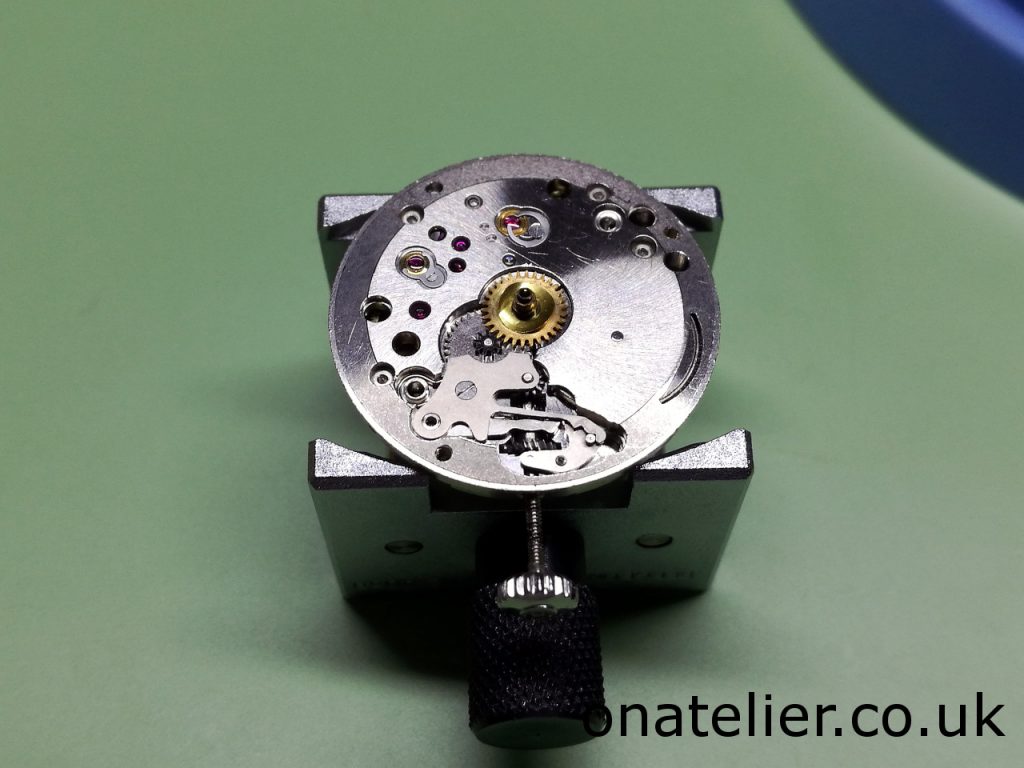 The movement is now ready to be tested, and looks very nice indeed. The amplitude is good, and I have nice stable rate so I can proceed further. 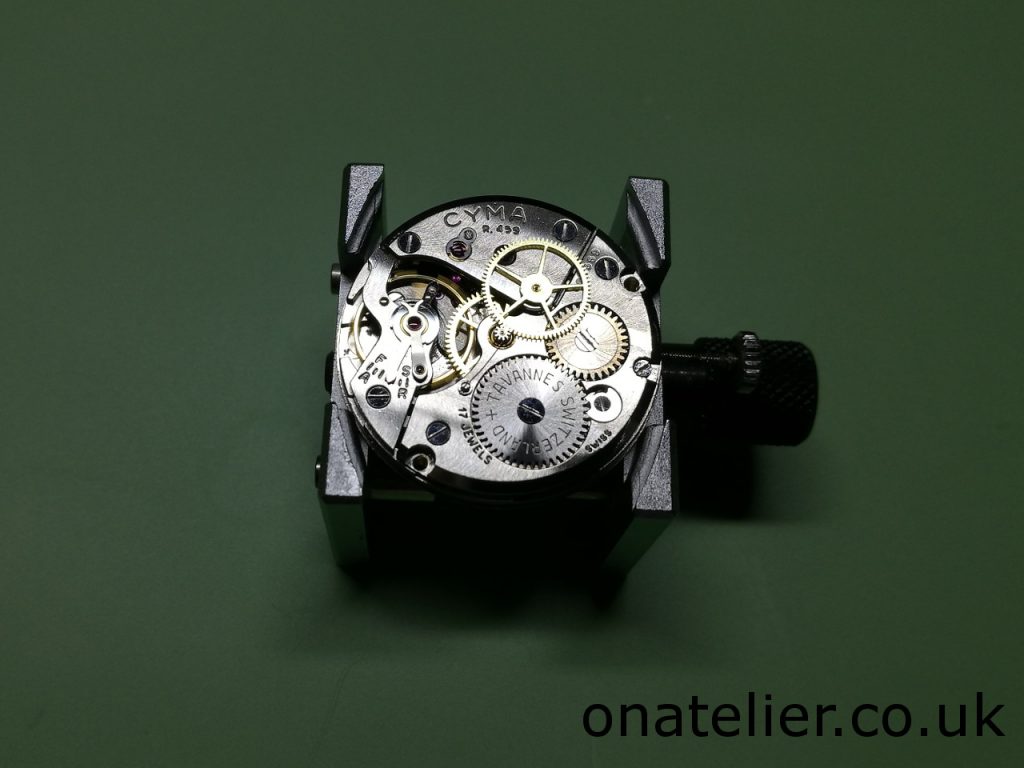 Dials and hands are installed. Particular care must be taken when fitting the seconds hand on this movement: the sweep seconds pinion needs to be supported from the upper side of the movement before pressing the hand home. The dial is in fantastic condition and has a beautiful sunburst finish. 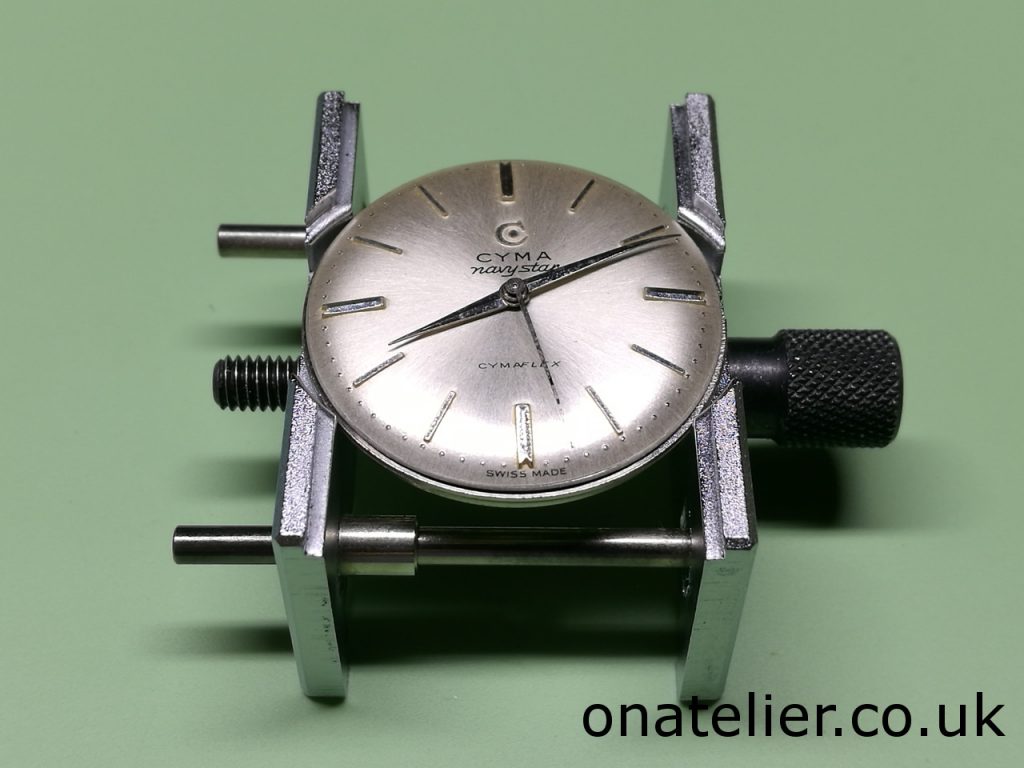 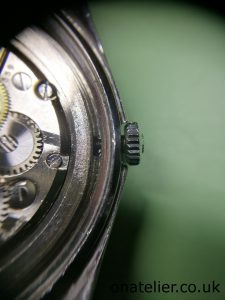 The final piece of work I need to complete on the Cyma Navystar is attend to the crown issue, which does not sit flush against the case. The picture below shows the gap, it looks as if the crown was in its time setting position, not ideal! 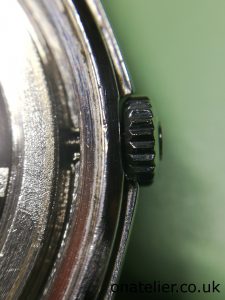 I disassemble the crown and stem, file a few tenths of a millimetre from the stem and screw the crown back in place after applying thread lock. It is now sitting in the correct position flush against the case.

The work is complete, and I really enjoyed working on this watch. The Cyma Navystar is very well built, with a beautiful movement, cased in a robust yet elegant stainless steel case.  I must confess this has made me want to acquire one at some point, but nice examples like this one do not come about very often so the search is on! 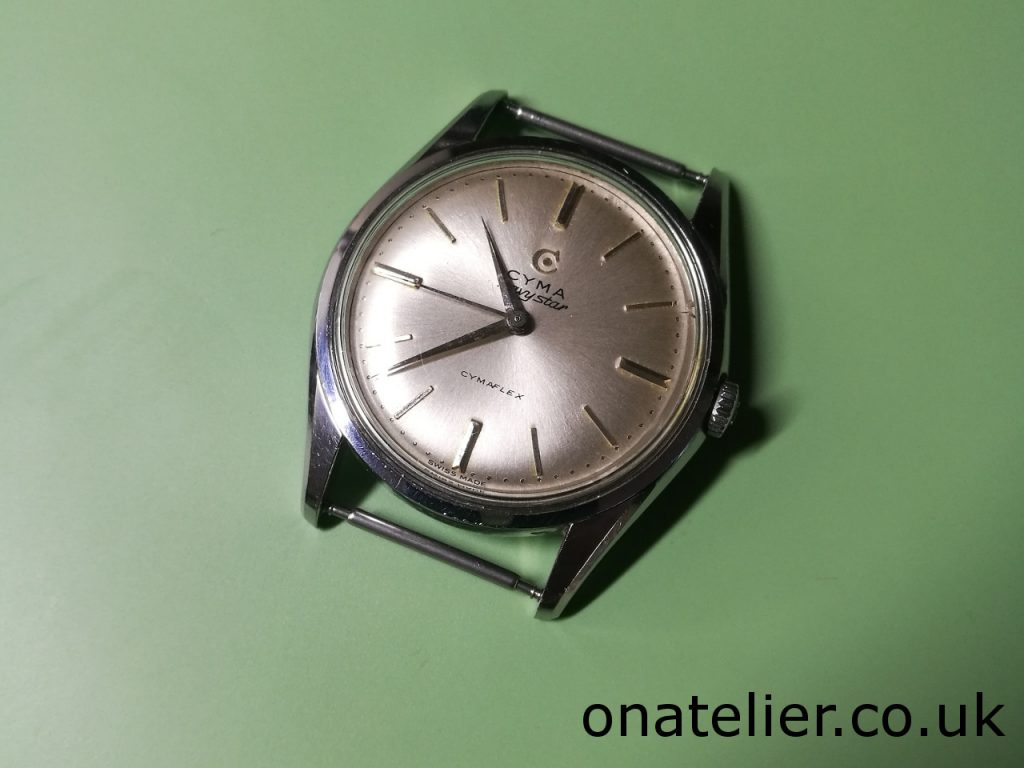 I would like to conclude this write up by thanking the owner of the watch Silas, for giving me the opportunity to work on it and allowing me to feature it on the blog.