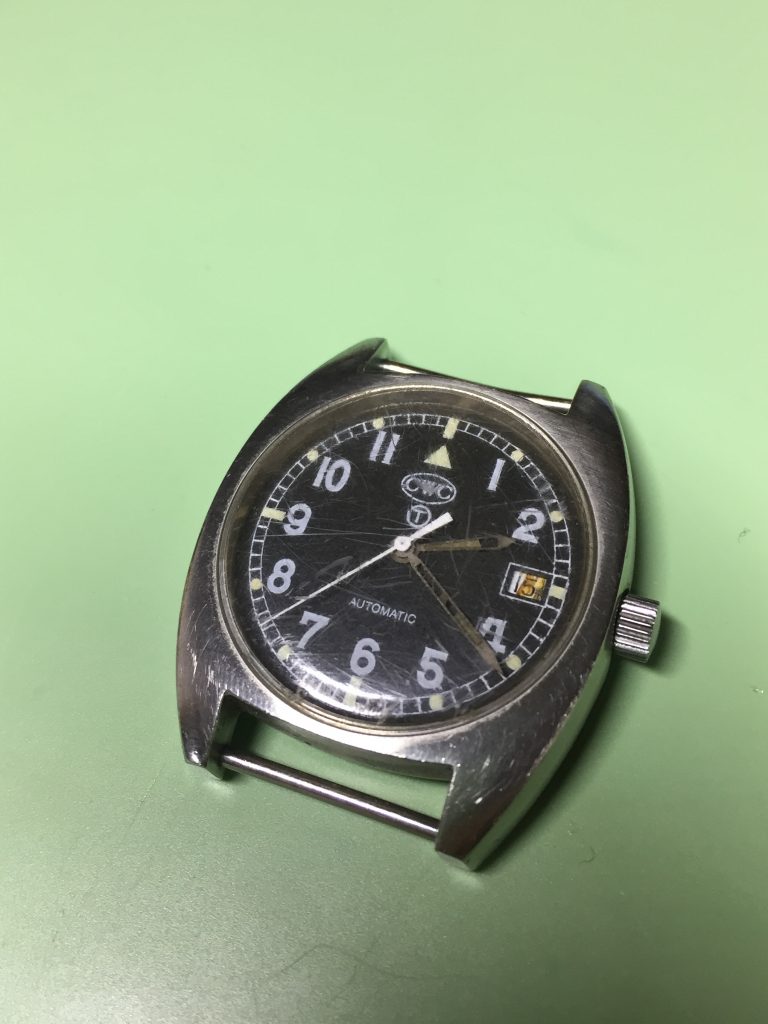 It looked very worn with a heavily scratched crystal. More worryingly it had signs of water ingress with marks of rust on the date wheel.

Before stripping down the watch to service it, I always place the watch on the timing machine if it is running. This allows me to get an idea of its condition. In this case, the amplitude fully wound is too low, one of the indications that the watch needs a service. 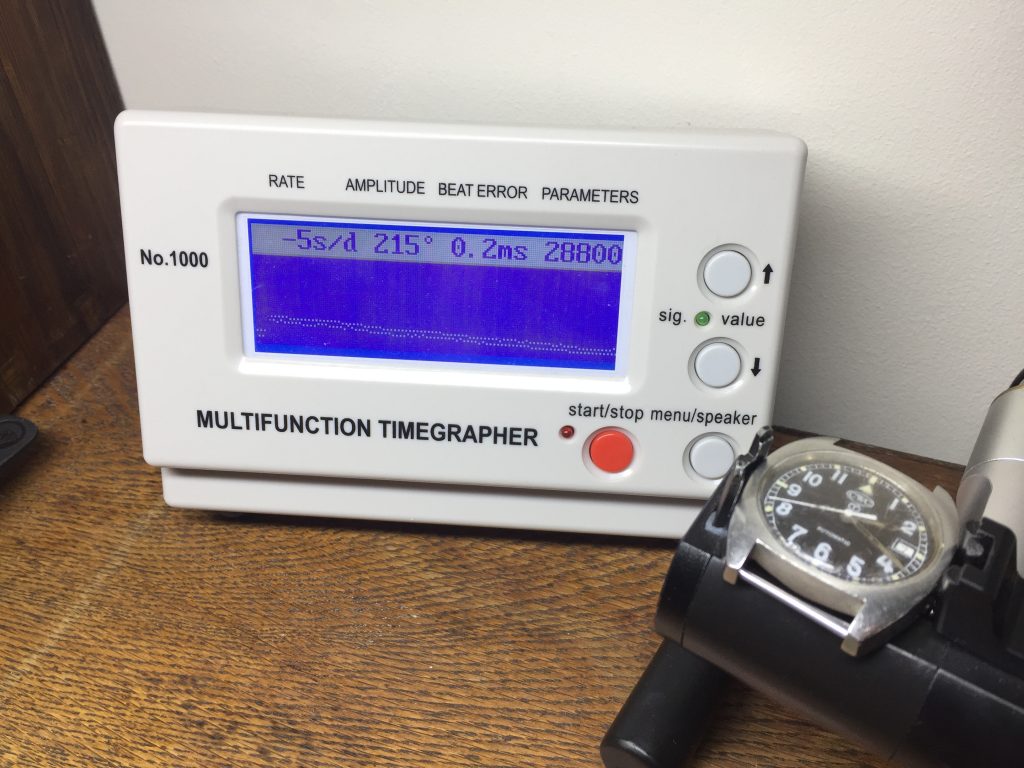 I start by opening the case, this is a snap on case back so it is pried off with a knife. This reveals the ETA 2824-2 movement. 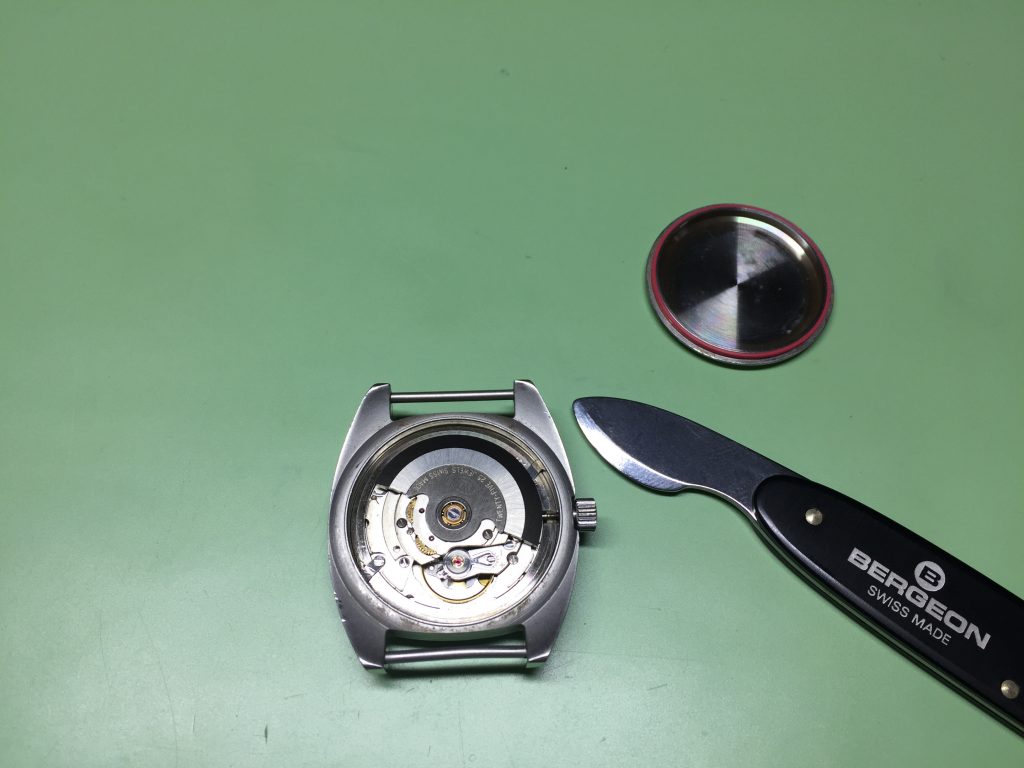 The crown / stem assembly and case case clamps are removed. We can now remove the movement from the case, and take the hands and dial off.  Note the signed CWC oscillating weight which is a nice touch. 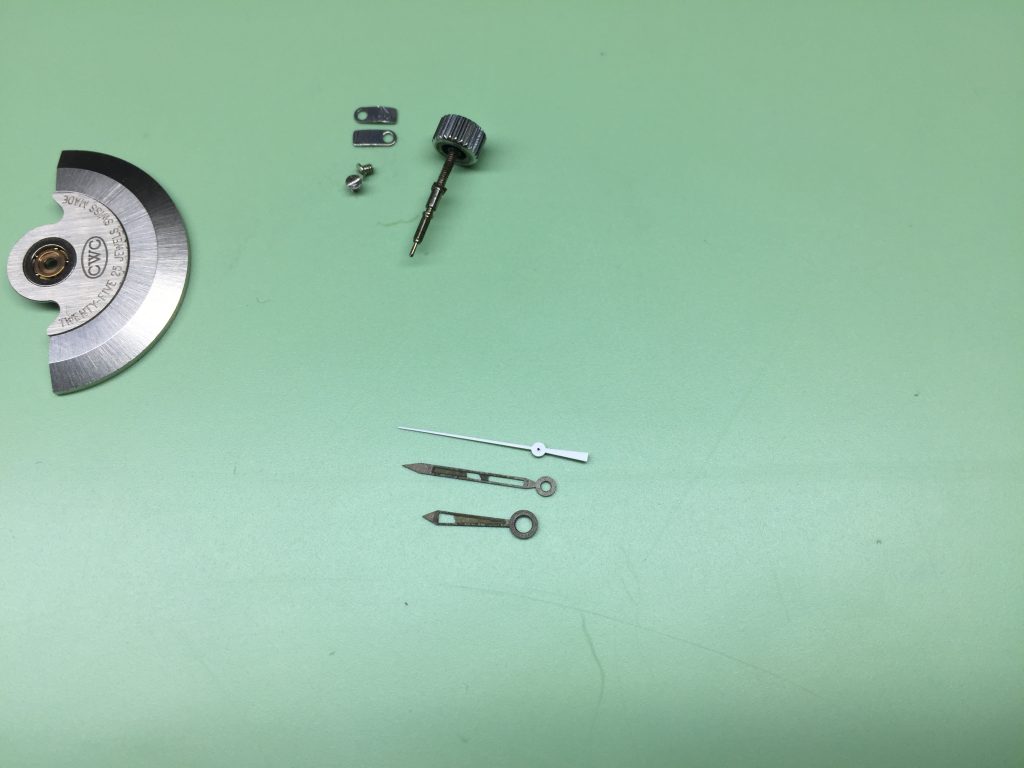 You can see the rust looks pretty bad, this could be bad news if components of the movement are affected. 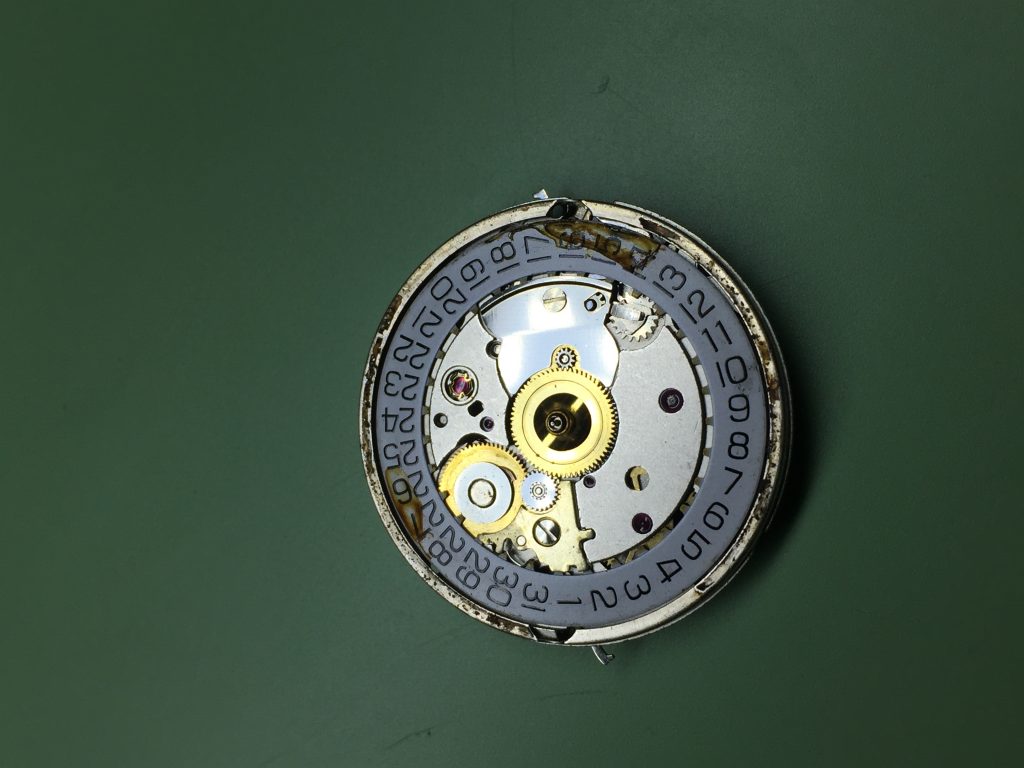 I start by removing the oscillating work and automatic works. It will be fully stripped down for cleaning. 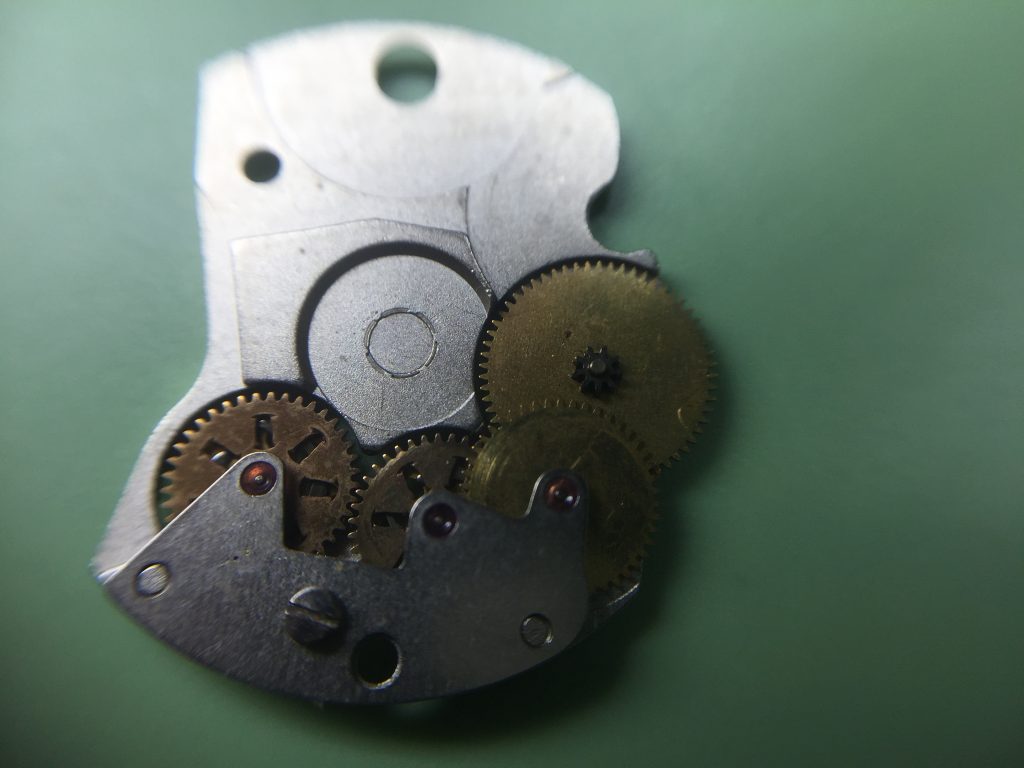 That’s a lot of oil under the ratchet wheel. 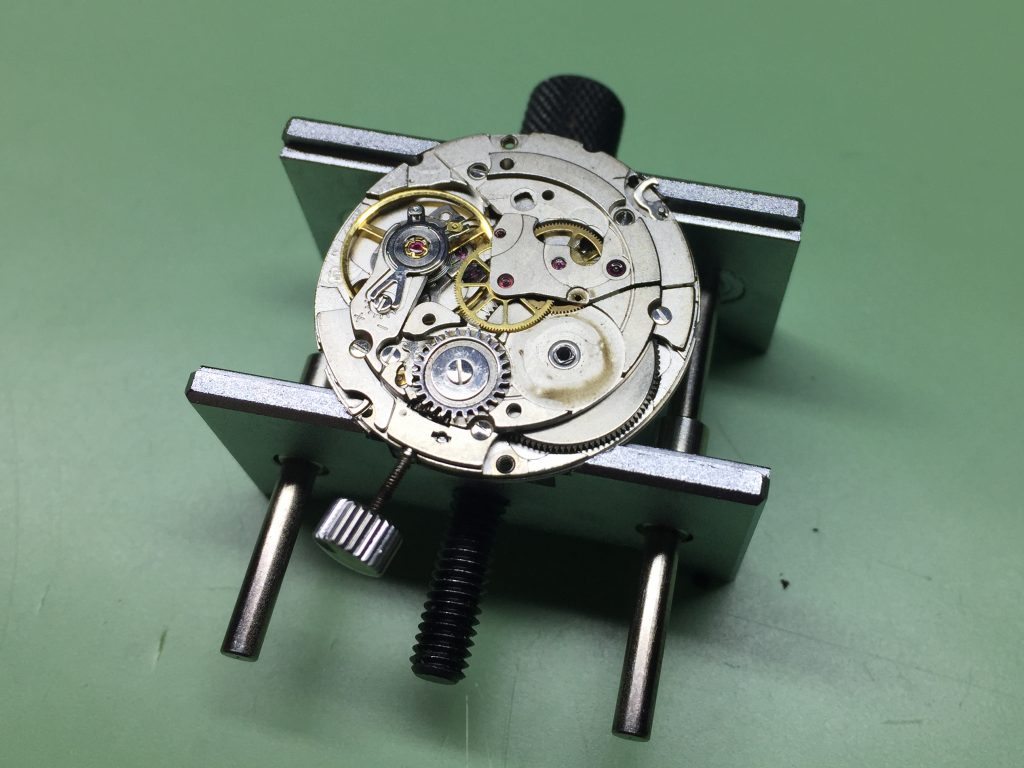 This photo was taken after the removal of the winding mechanism,  balance wheel and train wheel bridge. 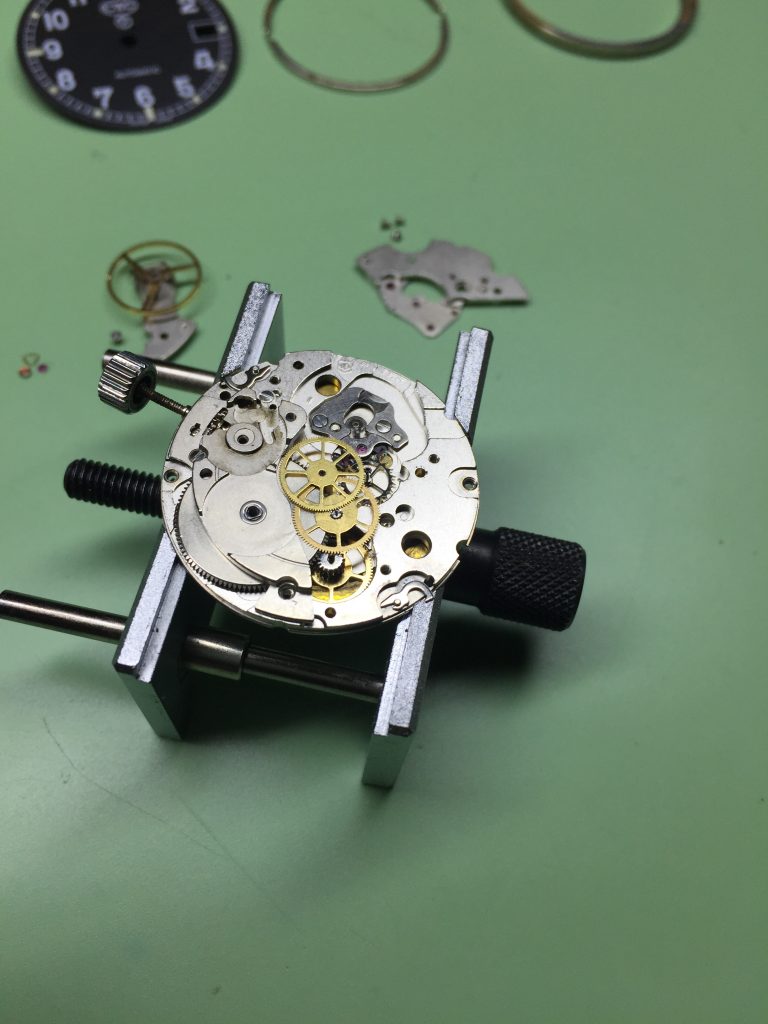 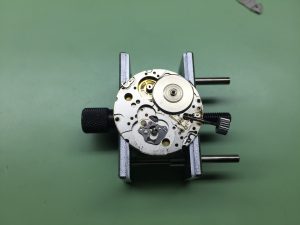 The removal of the barrel bridge reveals more evidence of over oiling. 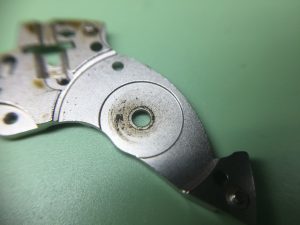 And a lot of dried up oil and dirt.

Now on the dial side, with the motion work and calendar work removed, leaving just the keyless work and end stone. 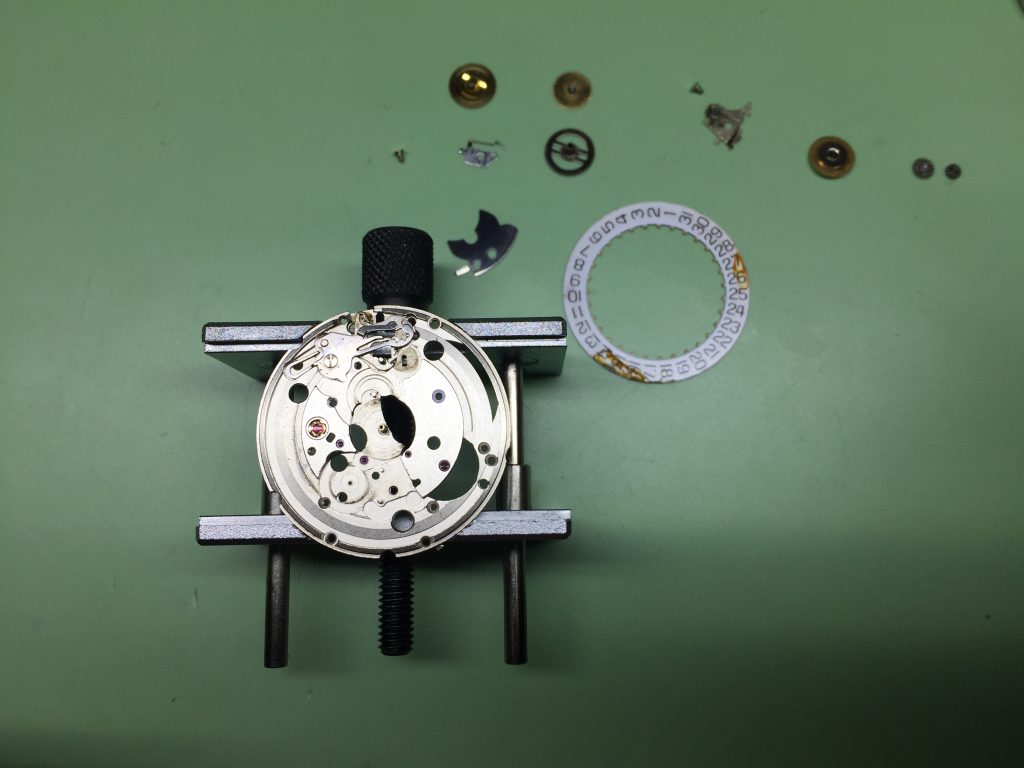 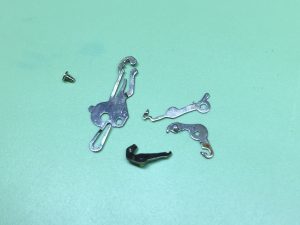 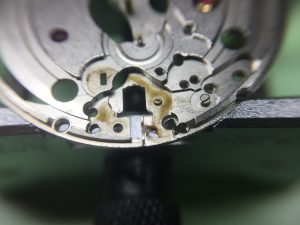 And here we are with all the parts disassembled, and ready for cleaning. 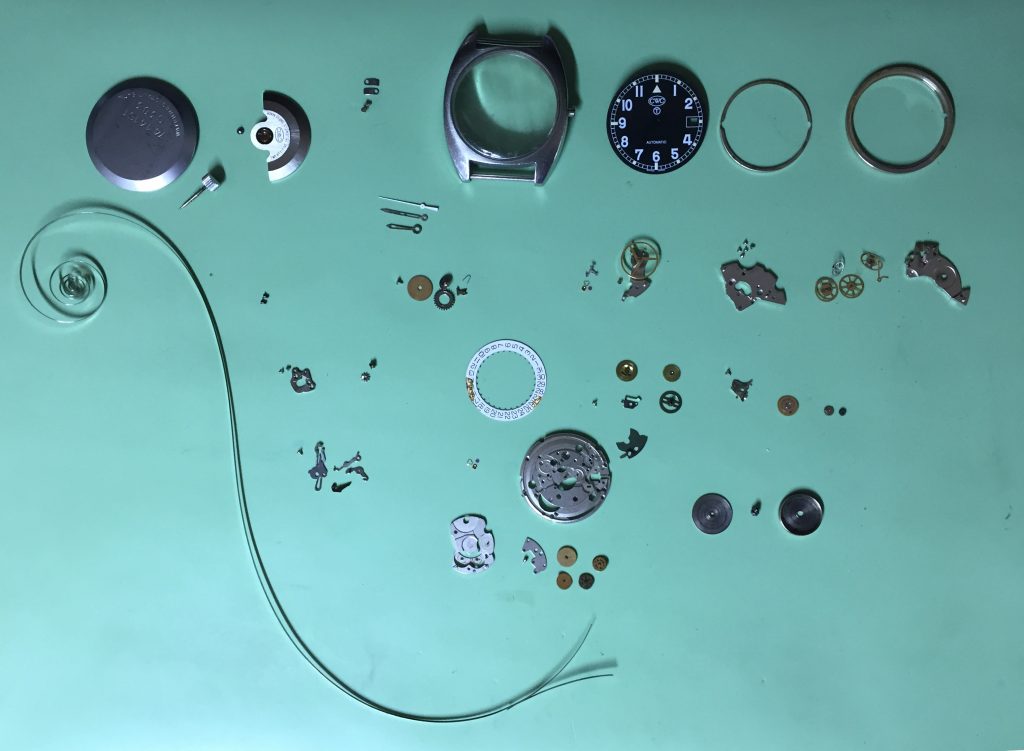 After inspection of the parts, I was pleased to see that none of the components of the movements were affected by rust which was great news. The rust marks came from the back side of the dial, so I sanded the rust off and cleaned it with acetic acid (aka vinegar) 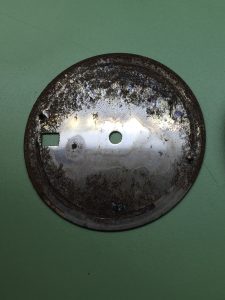 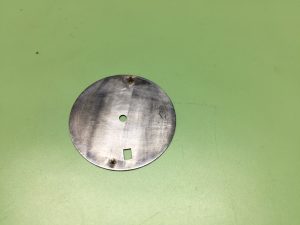 I also cleaned the date wheel with acetic acid to remove the rust marks. It can be tricky to remove them without affecting the print, but this one turned out very nicely, so no need for a replacement date wheel on this occasion. 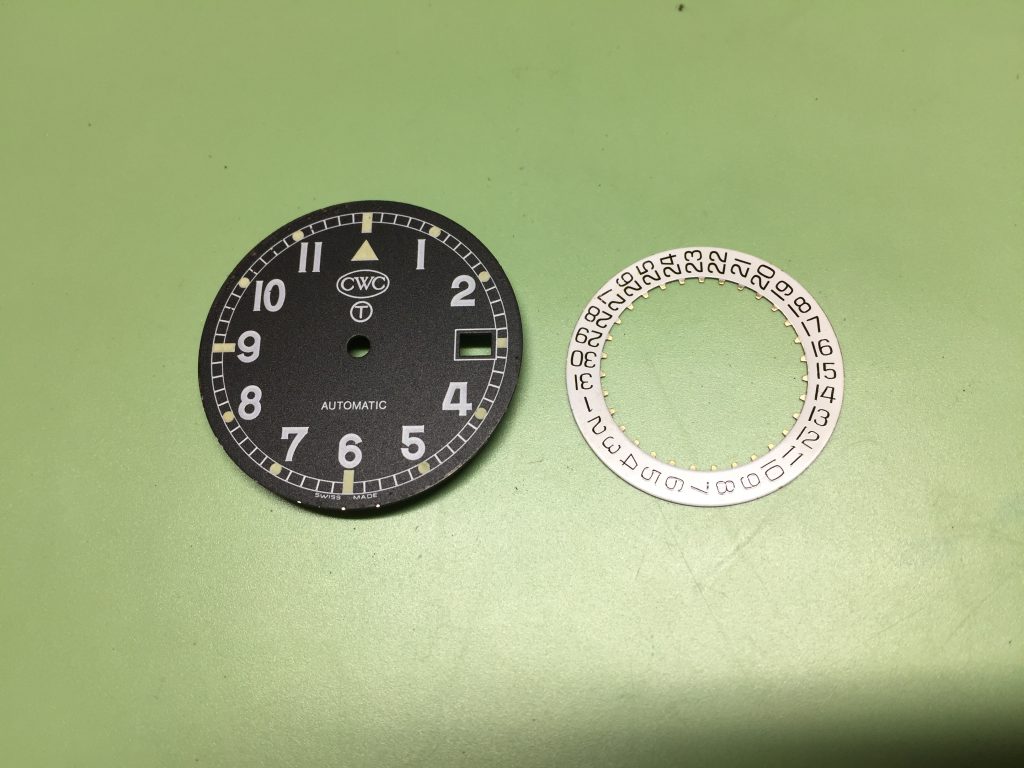 The movement is reassembled and lubricated. 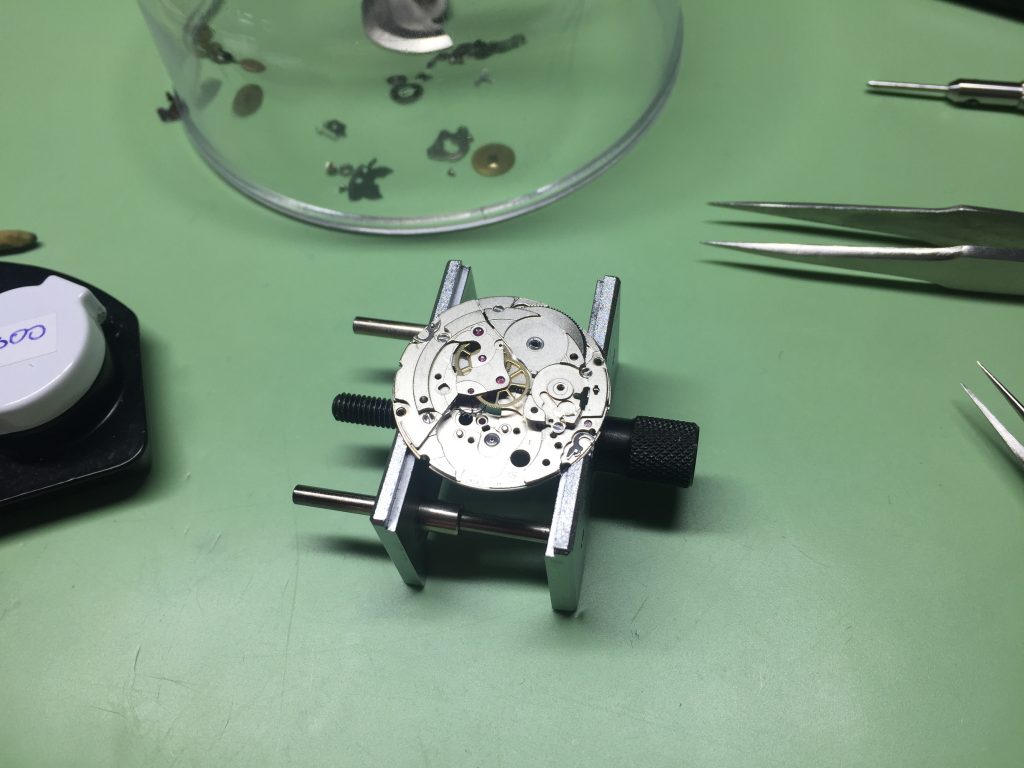 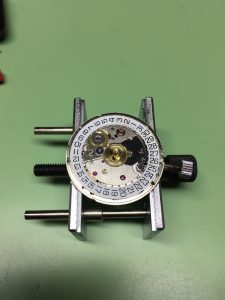 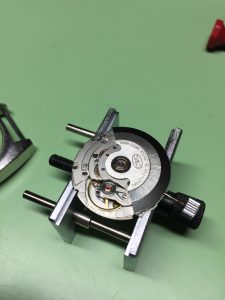 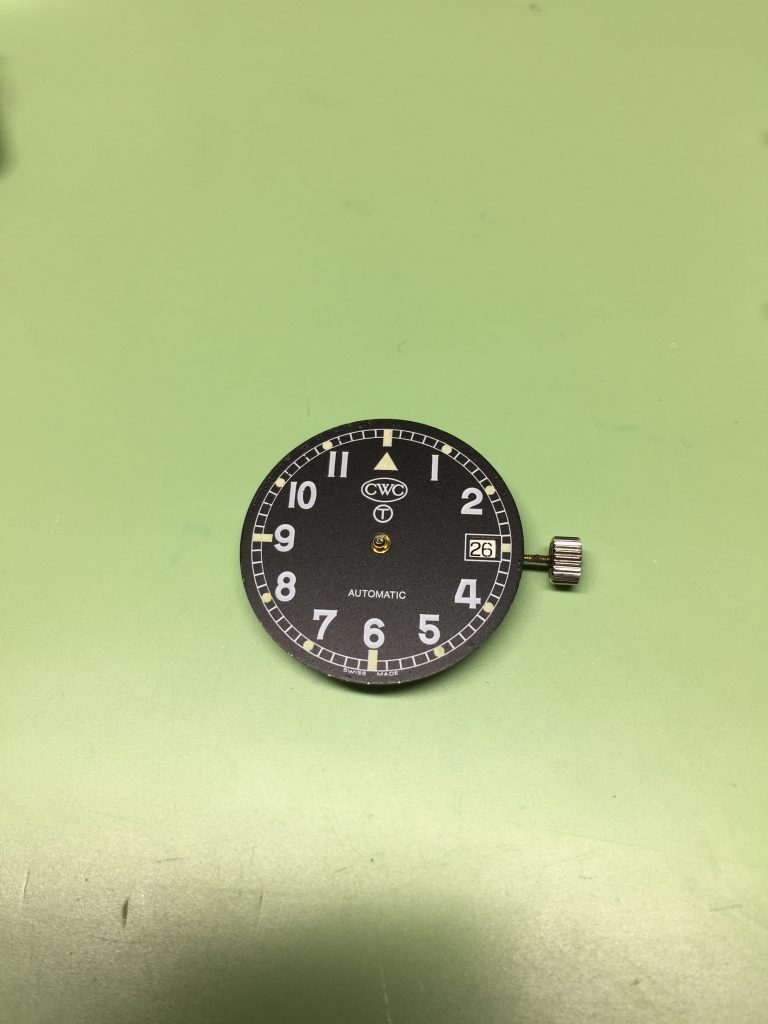 With the movement re-assembled, I turn my attention to the cosmetic issues.

I start with the crystal. This is a tension ring armoured crystal. It is made of acrylic, so could typically be polished. 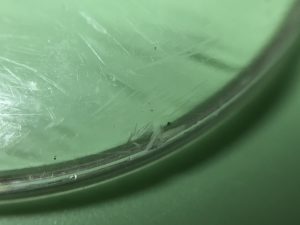 In this case the crystal had fairly deep scratches and chips. 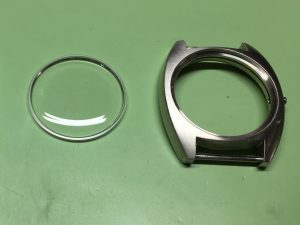 With direct replacements being readily available I opted to replace with new. 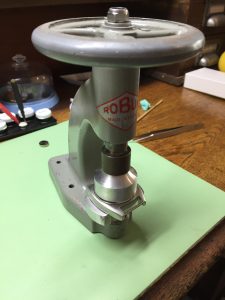 The new crystal is fitted with a press.

Finally I gave the case a light polish to finish the work, keeping the orientation of the brushed grain finish as per the original. 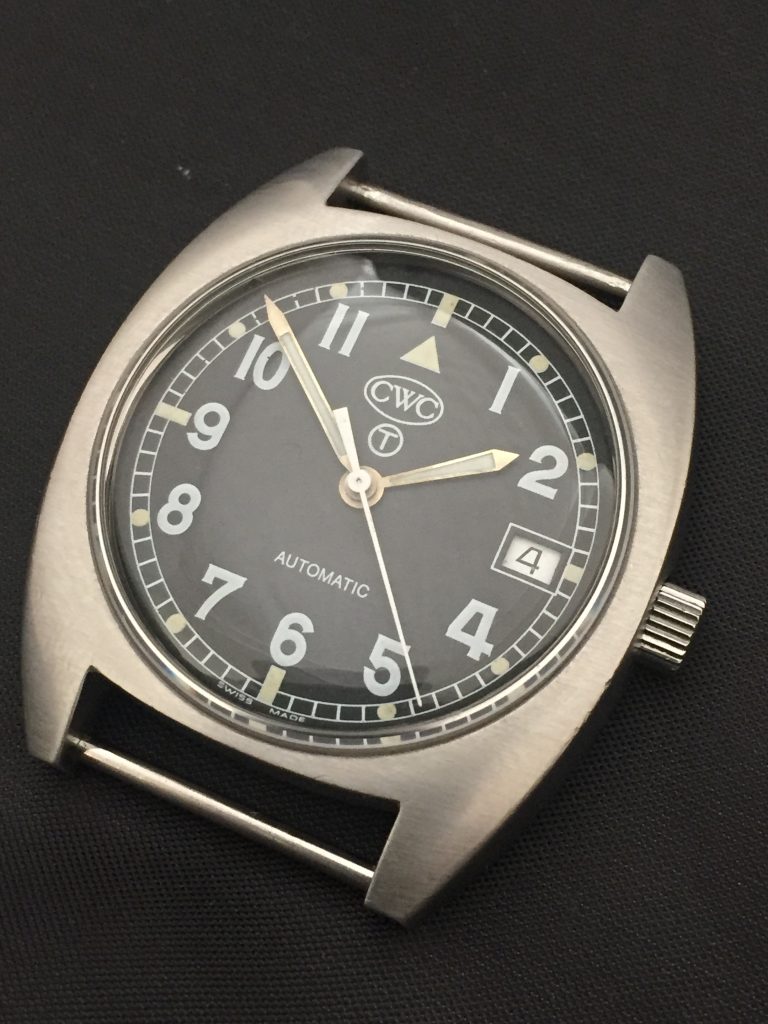 The watch is now looking ready for the battlefield, and should provide plenty more years of good service.