This Omega Calibre 1030 was in need of a service. The watch was manufactured in 1978. It has a 9ct solid gold case, which is a “front loader” design with no removable case back, like many Omegas of the era. I think Omega produced some of the best dress watch designs in the 1970’s, and this one is a very good example, elegant and timeless. 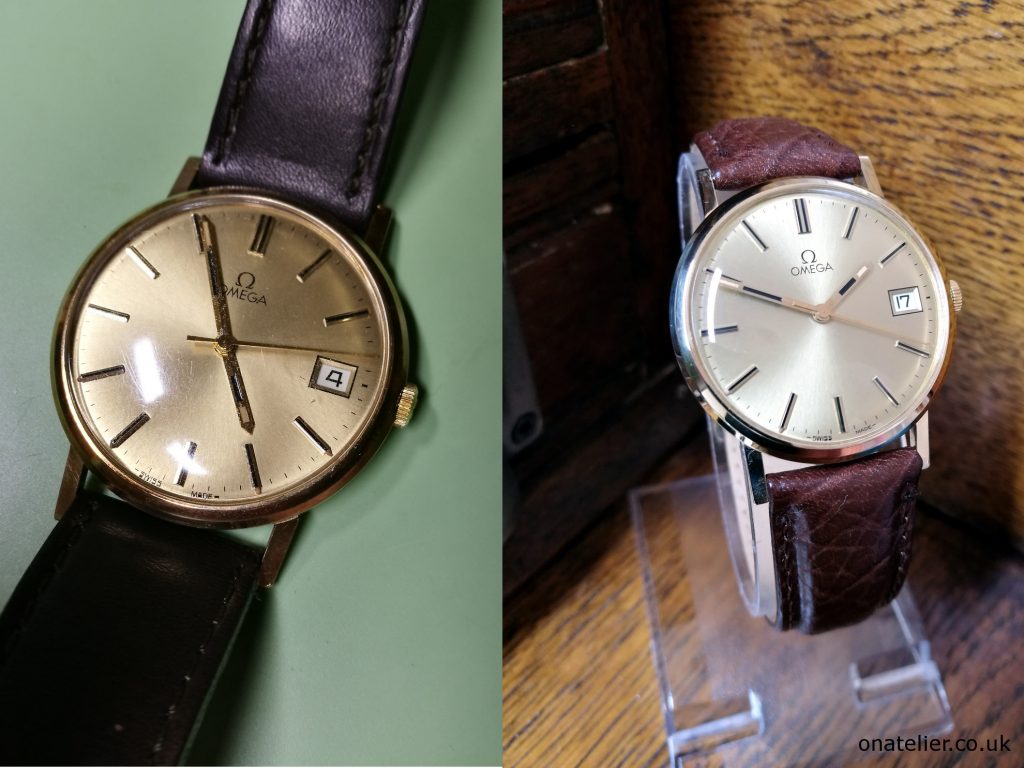 I start the service by conducting an overall appraisal of the watch. The timegrapher reading for this Omega Calibre 1030 is typical of a movement in need of a good clean, low amplitude and the lines, although straight overall, have an irregular pattern if you look closer. 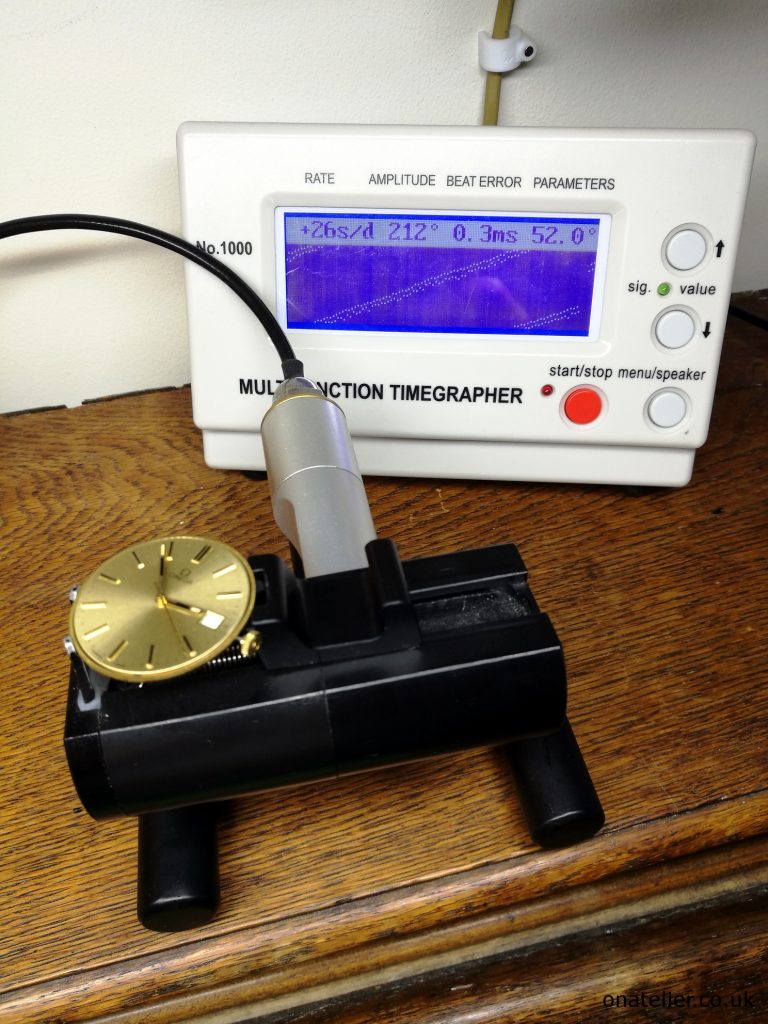 The movement is removed from the front of the case. There is a removable bezel so no need to take the crystal as with some of Omega’s “monocoque” design. I then carefully remove the hands. The dial is in excellent condition given the age of the watch. 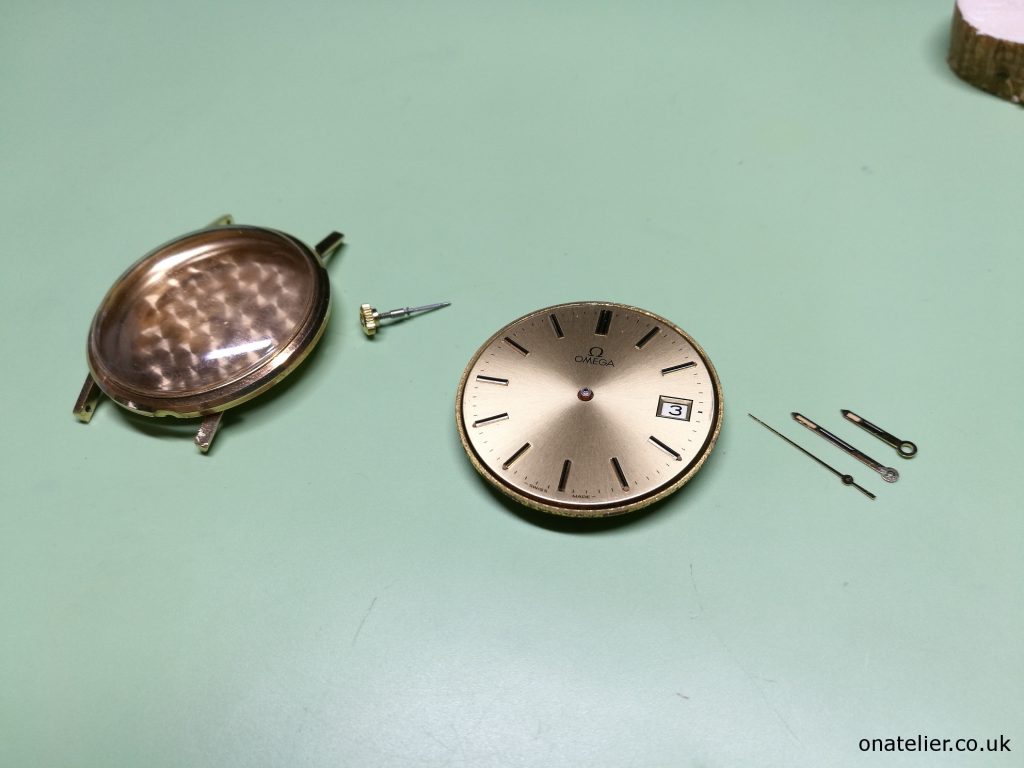 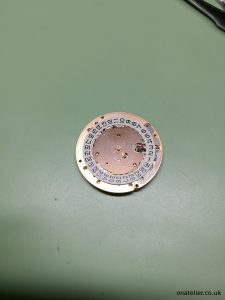 I start stripping down the movement with the dial side . 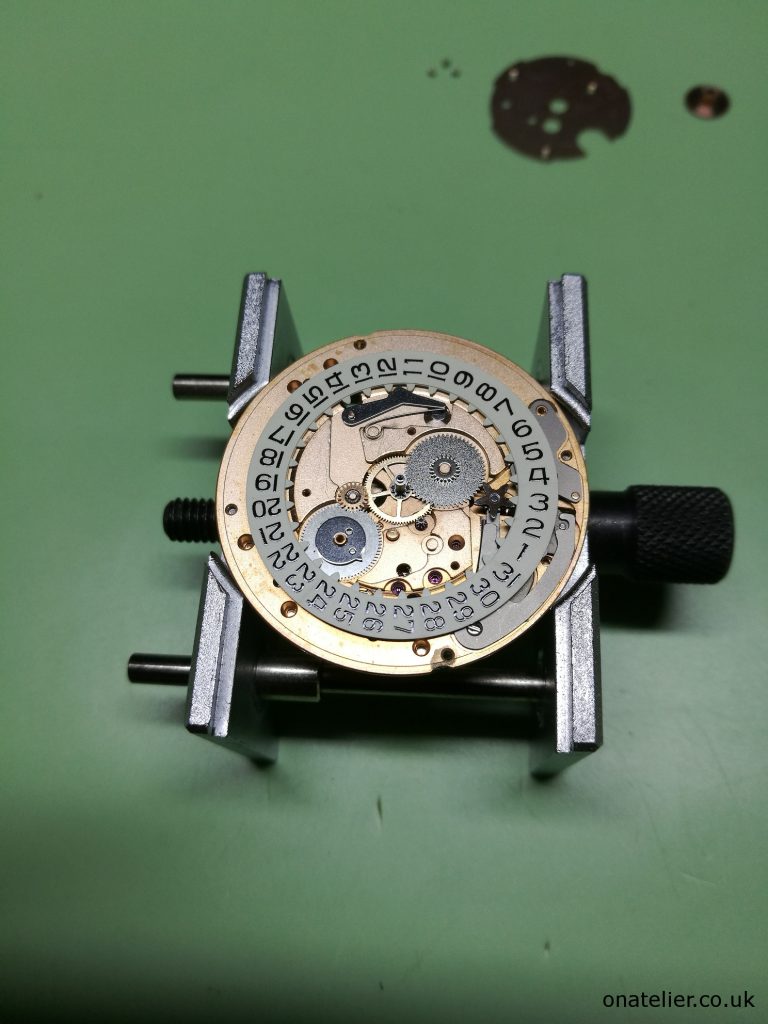 I proceed with the disassembly of the hour wheel, minute wheel, cannon pinion , day disc, jumper and spring, and the date indicator driving wheel. 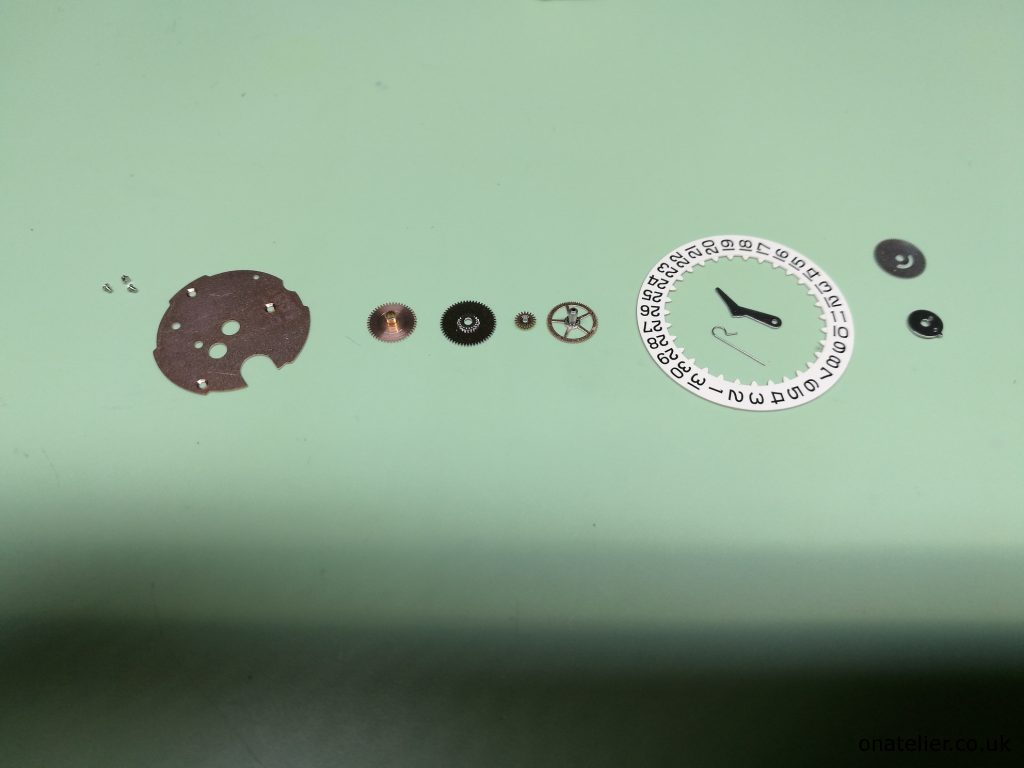 I then move on to the keyless work. 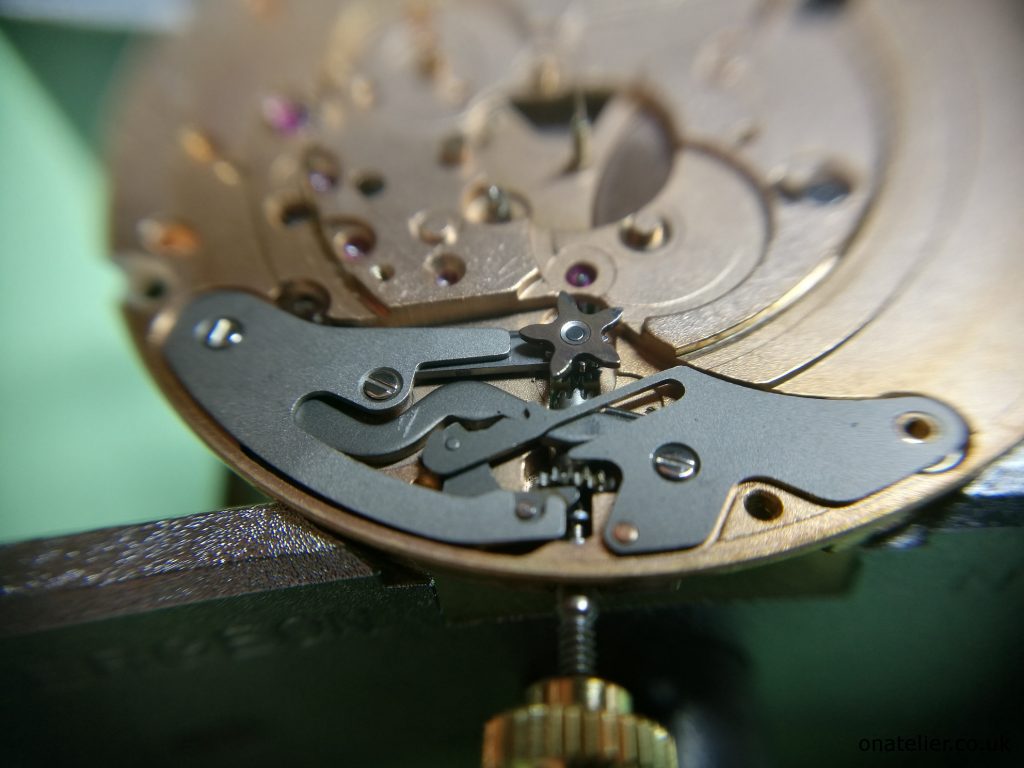 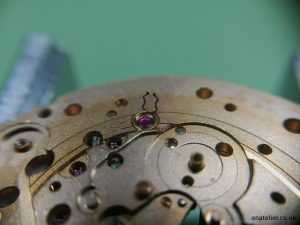 The last thing I do on this side of the movement is to release the Incabloc spring to allow me to take out the balance cap jewel and chaton assembly.

The work is done for the dial side. 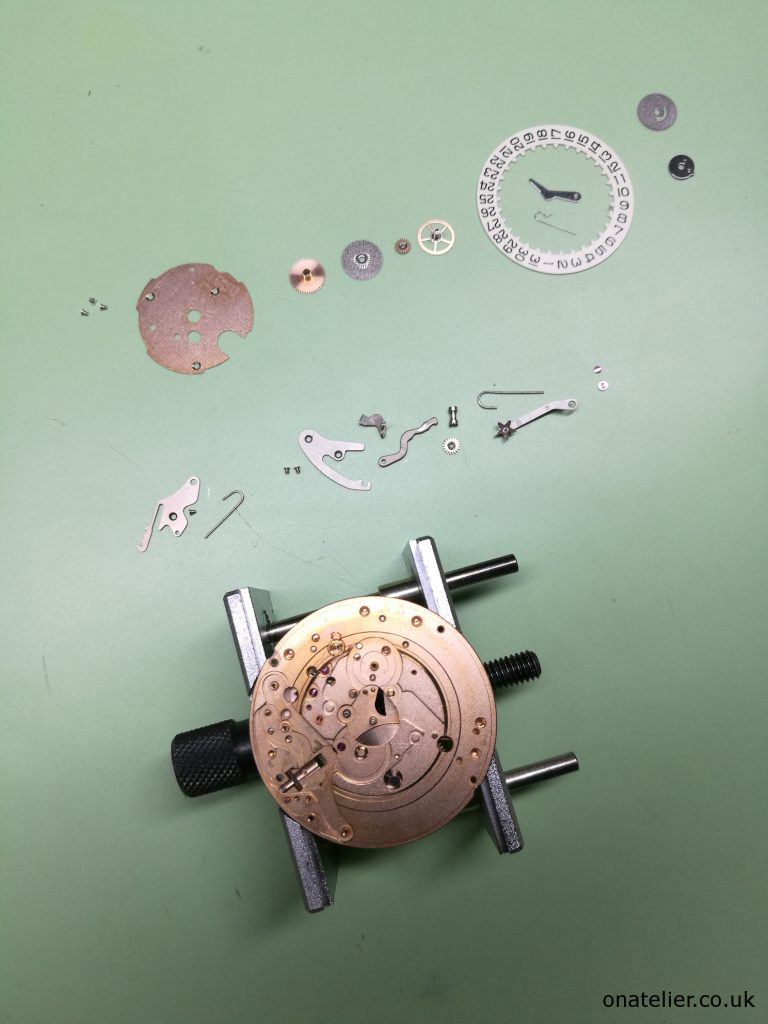 I now move on to the other side of the movement. On this picture the balance wheel has already been taken out. 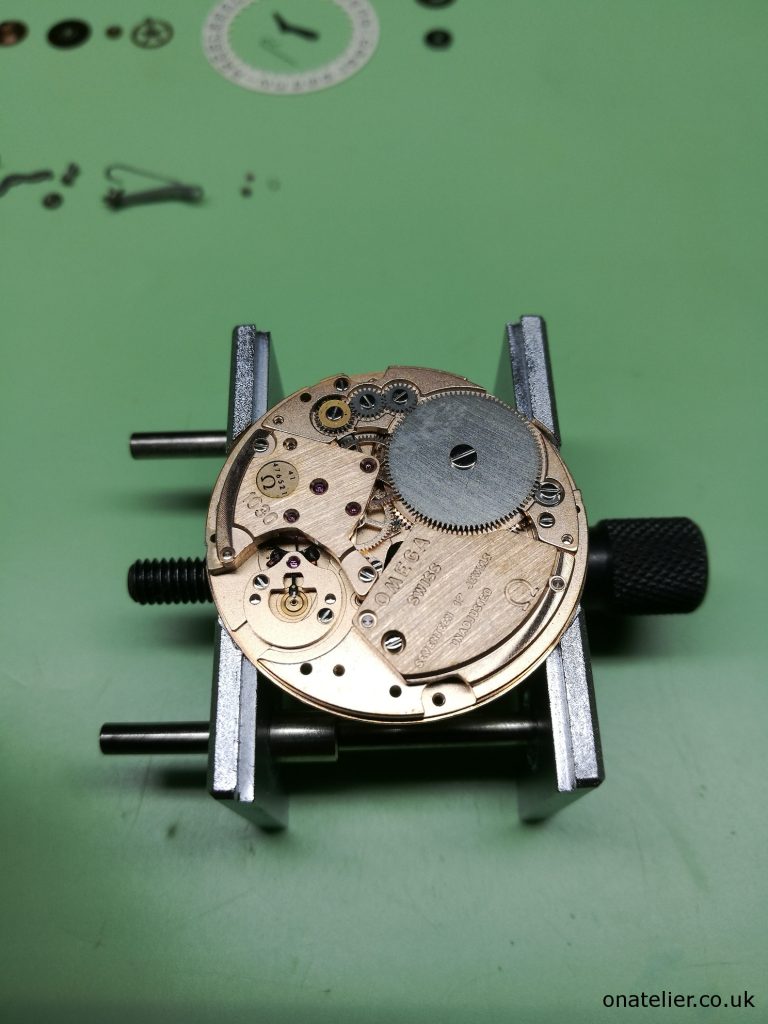 I remove the winding gears and ratchet wheel. 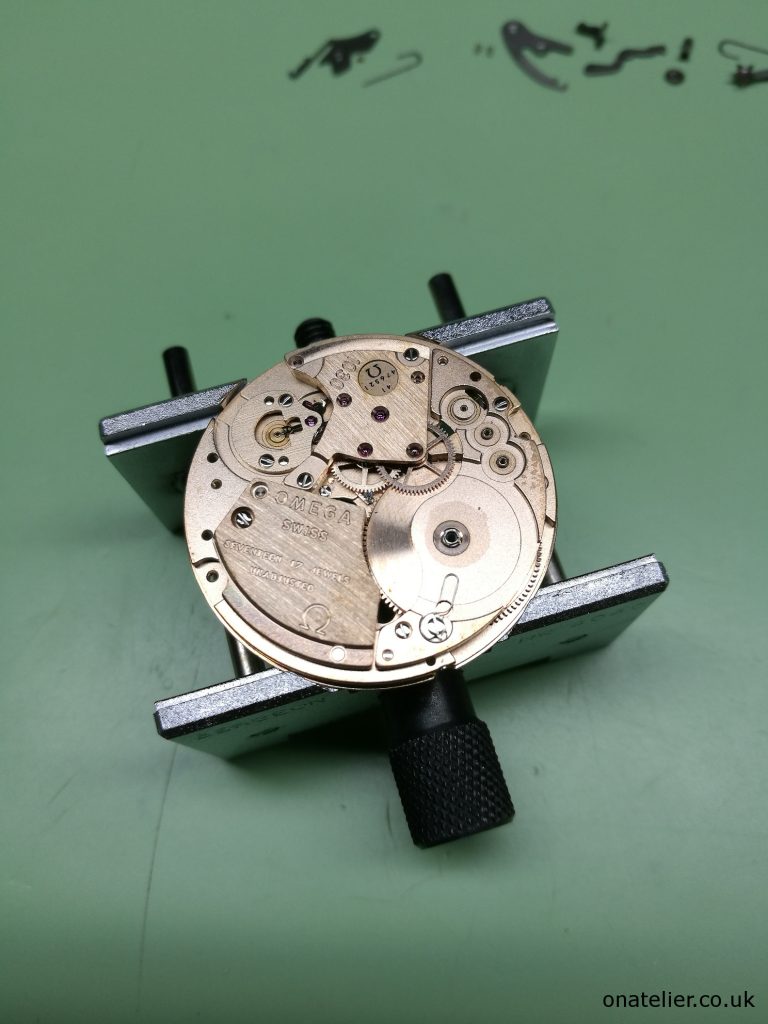 I then take out the train bridge. 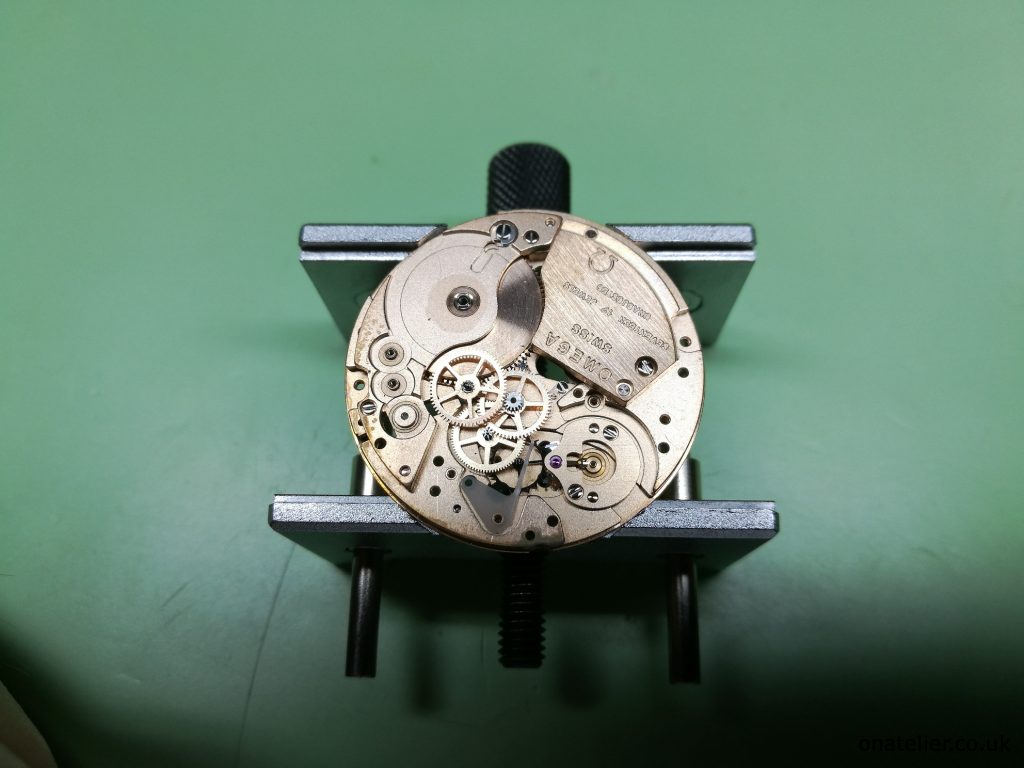 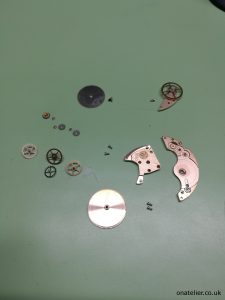 And then remove the train wheels.

Note the small spring on this picture which exerts pressure on the indirectly driven seconds pinion (I will come back to that later, they are sometimes troublesome!). 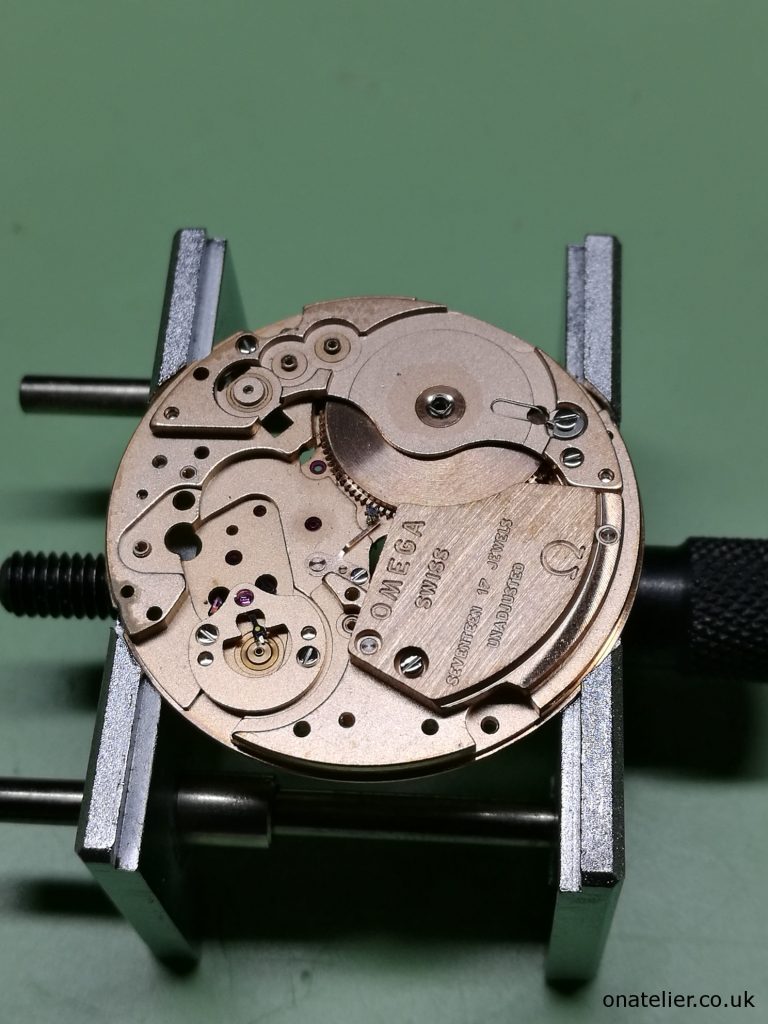 The movement is now fully stripped, ready for cleaning and inspection. 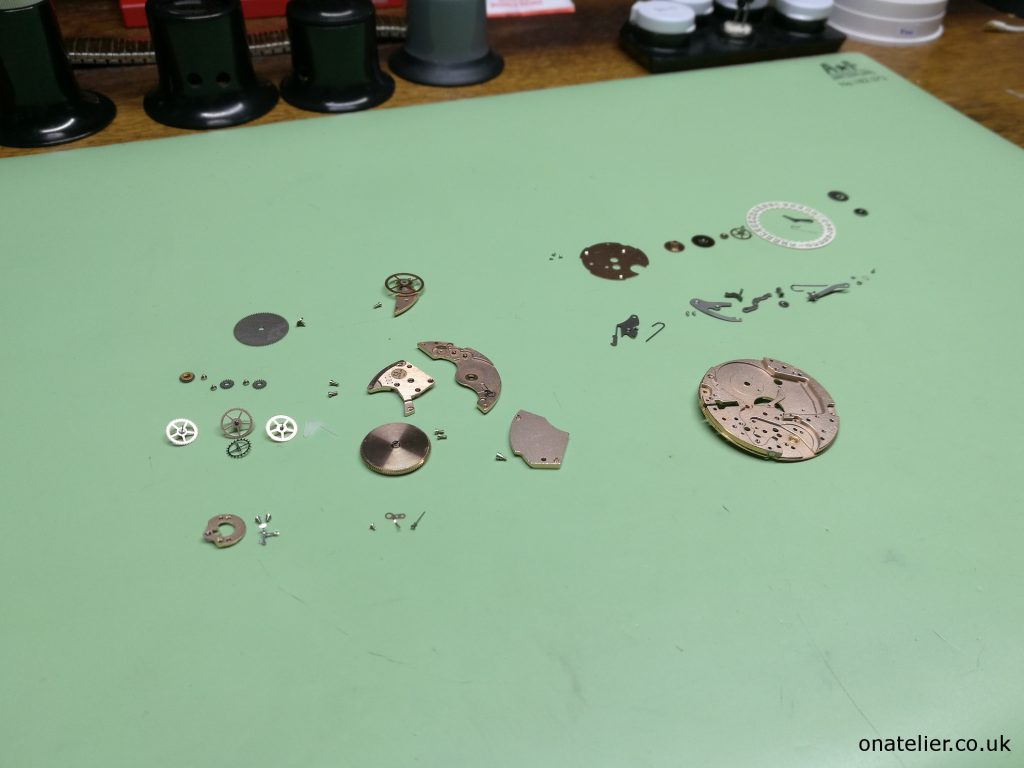 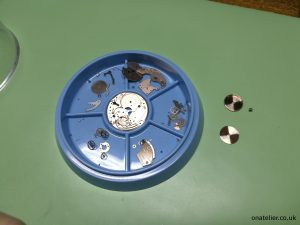 And the parts after the ultrasonic clean, ready to start re-assembly.

I am starting as usual by rebuilding the barrel and mainspring assembly. I use a new mainspring. 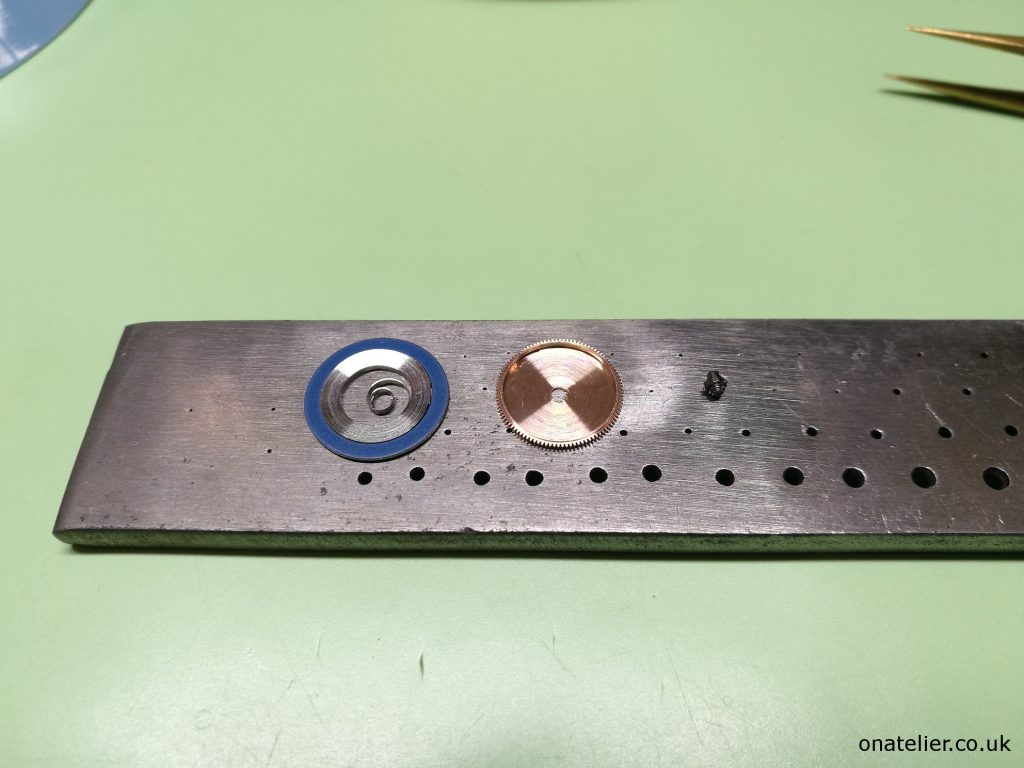 I then like to oil both balance cap jewels and fit them in their respective locations. 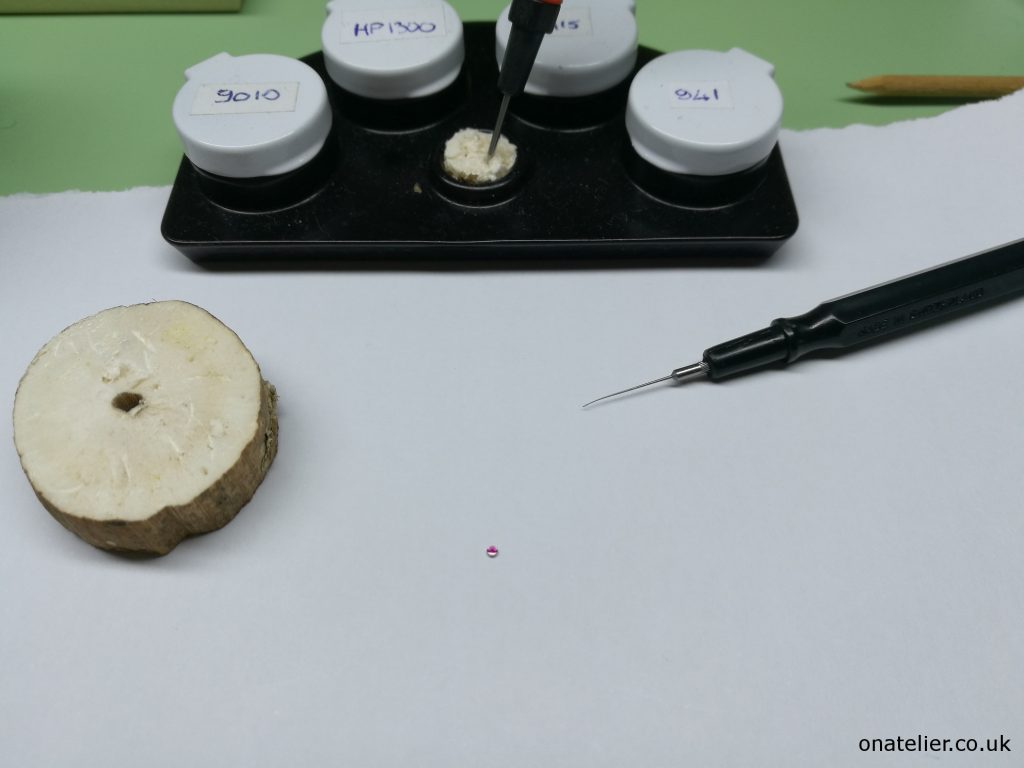 I assemble the train. 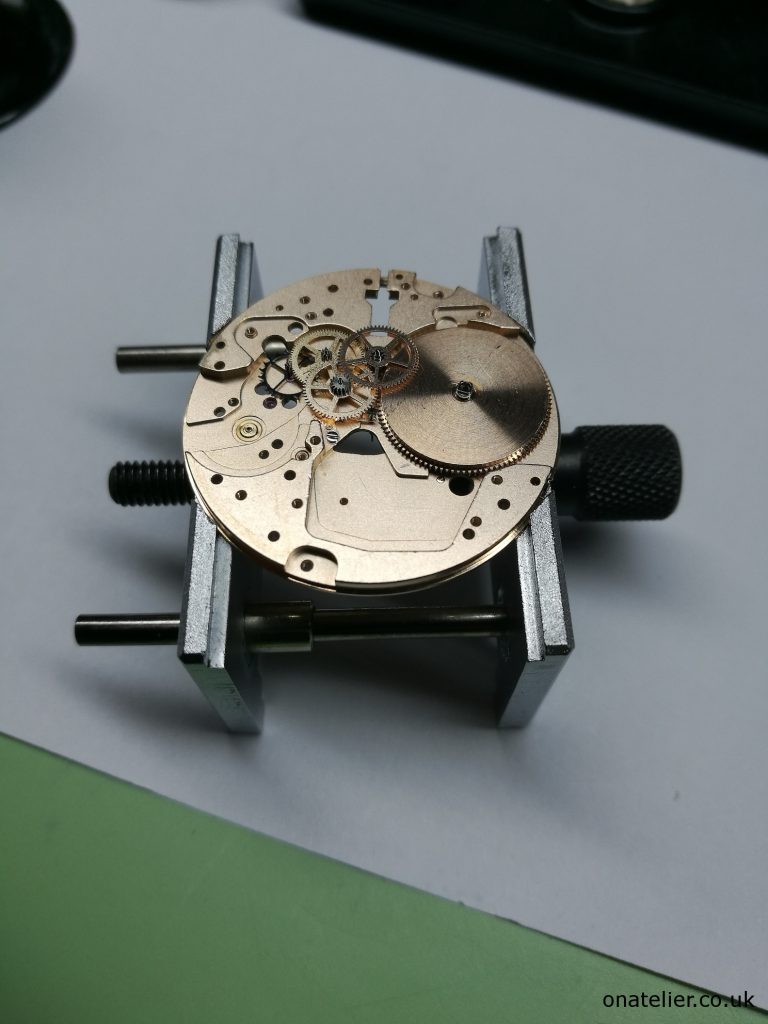 I secure the train wheels with the bridge, and install the winding gears and ratchet wheel. 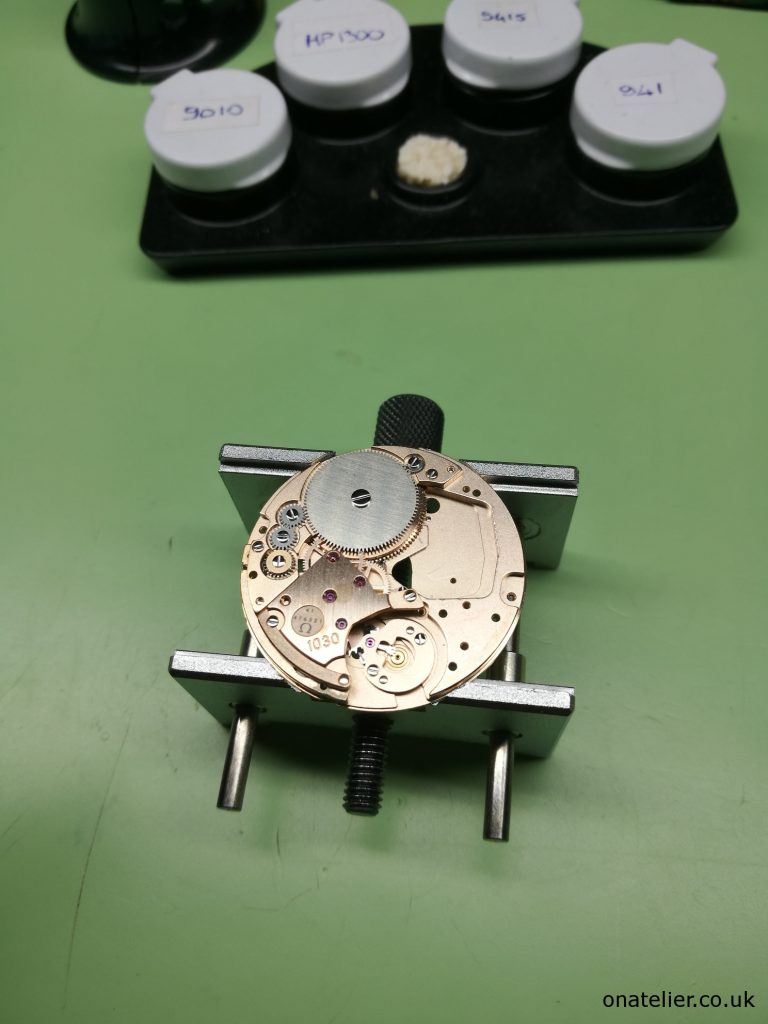 At this stage, I run the movement on my timegrapher as it has all the parts necessary to beat again. The amplitude is disappointingly low, so something is not right: the watch will not perform correctly unless this is addressed. 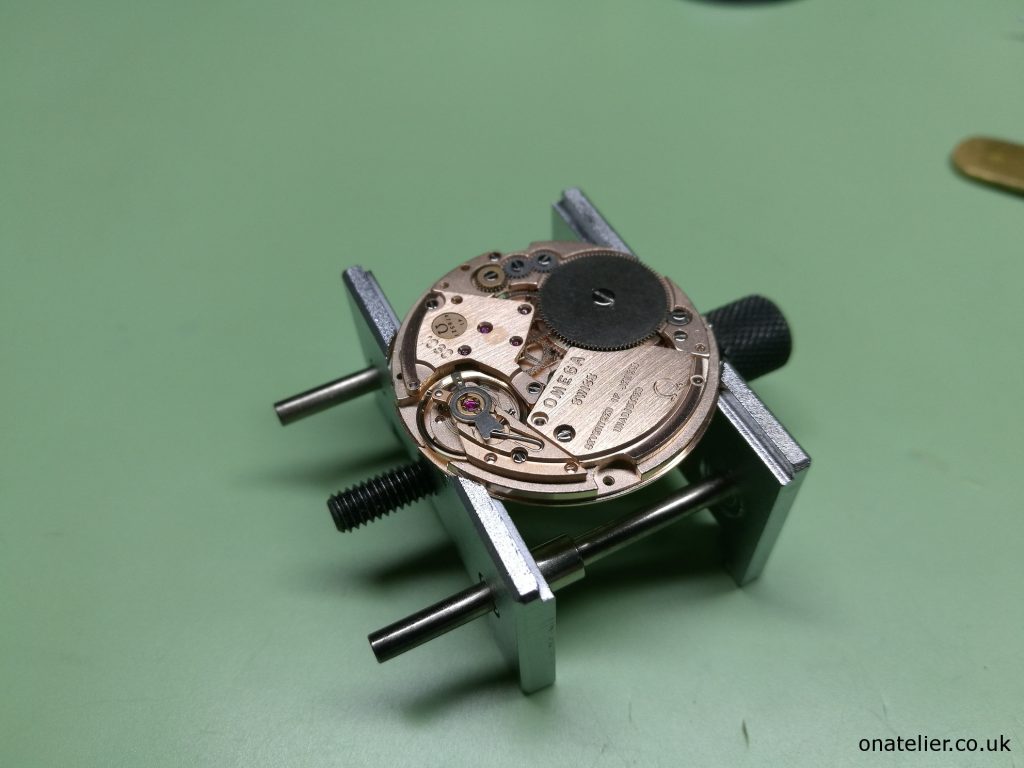 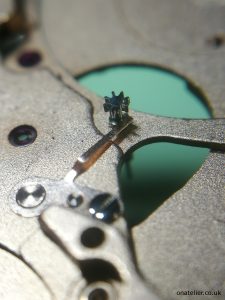 I traced the issue back to the seconds pinion friction spring I mentioned above.  It needed adjusting. Too much tension and the spring causes an energy loss and low amplitude of the balance wheel, and not enough tension will result in a “stutter” of the sweep second. It has to be just right (note this picture was taken during disassembly, prior to cleaning).

With the watch now running as it should, I re-assemble the dial side of the movement. 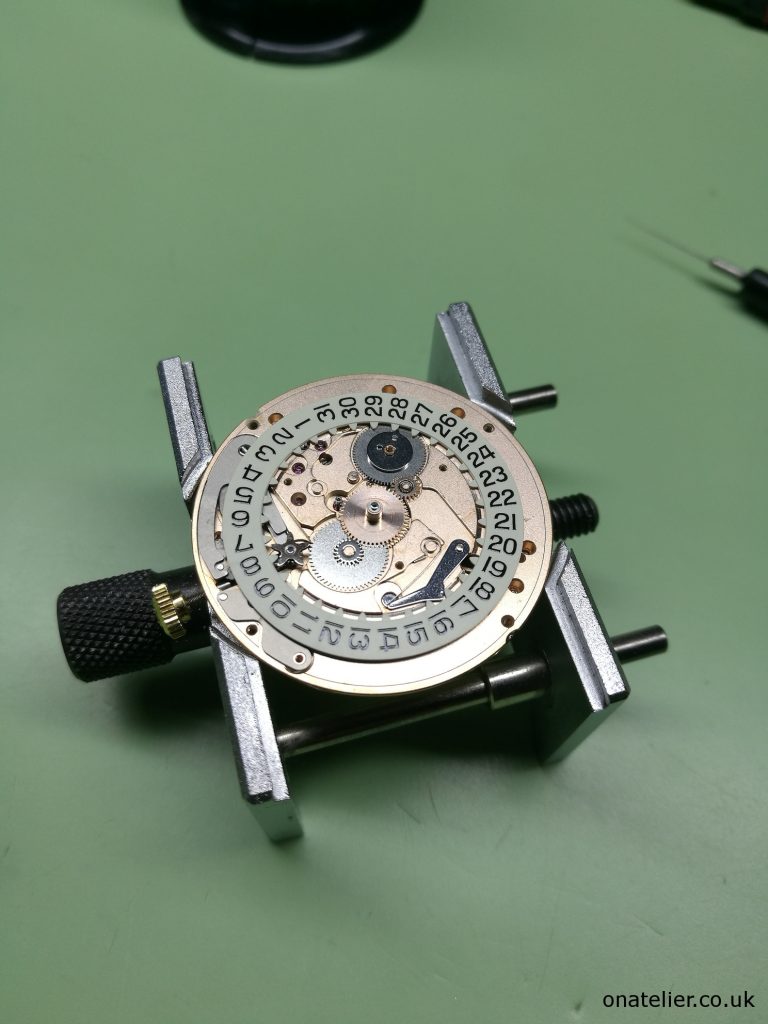 You would be forgiven in thinking that the job is now done as far as the movement is concerned. Unfortunately it is not until now that I realise I missed a part during the assembly: the stop lever. Without it the watch will not “hack” when the crown is pulled to adjust the time. 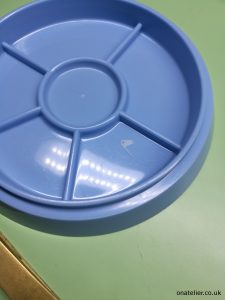 My excuse for omitting it during the assembly of the train is that the part is made of plastic. Therefore I did not clean it with the rest of the parts in the cleaning solution of the ultrasonic machine as this could result in damage. I just stored it somewhere else safely and you guessed it… forgot about it. 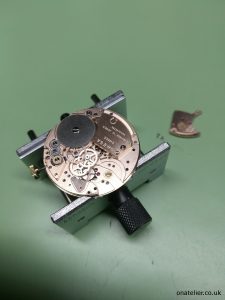 It’s not a big issue, I just need to remove the escapement and the train bridge to fit it where it belongs.

I then turn my attention to the case. This lug does not look too great. 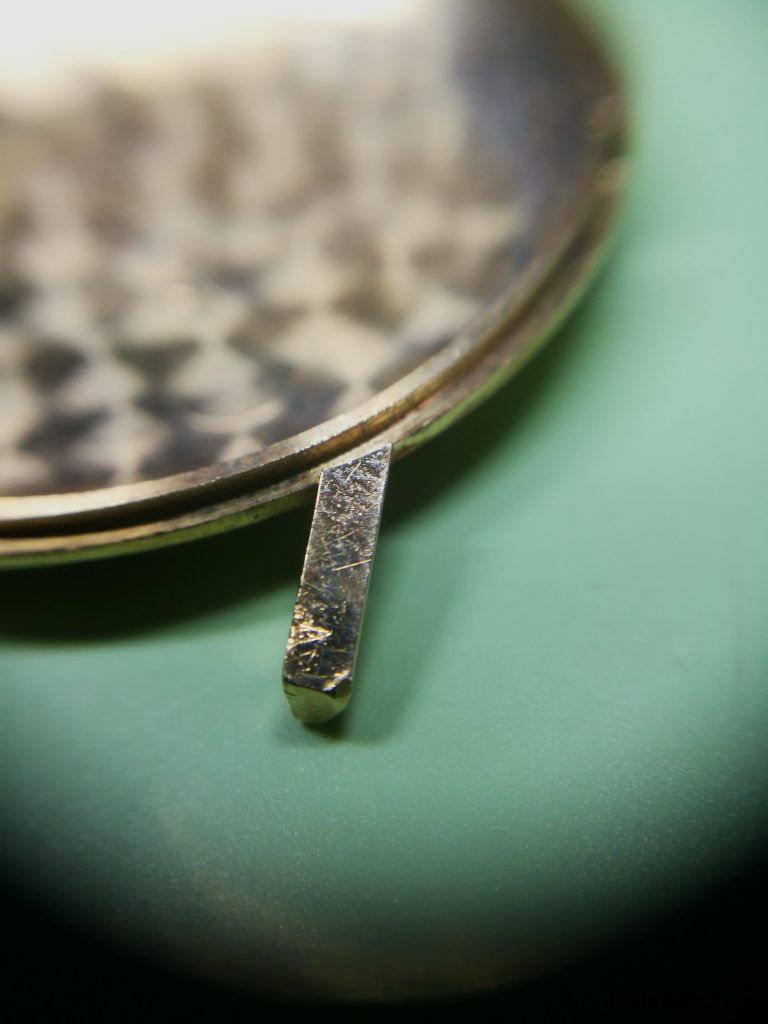 It looks a lot better after a light polish. 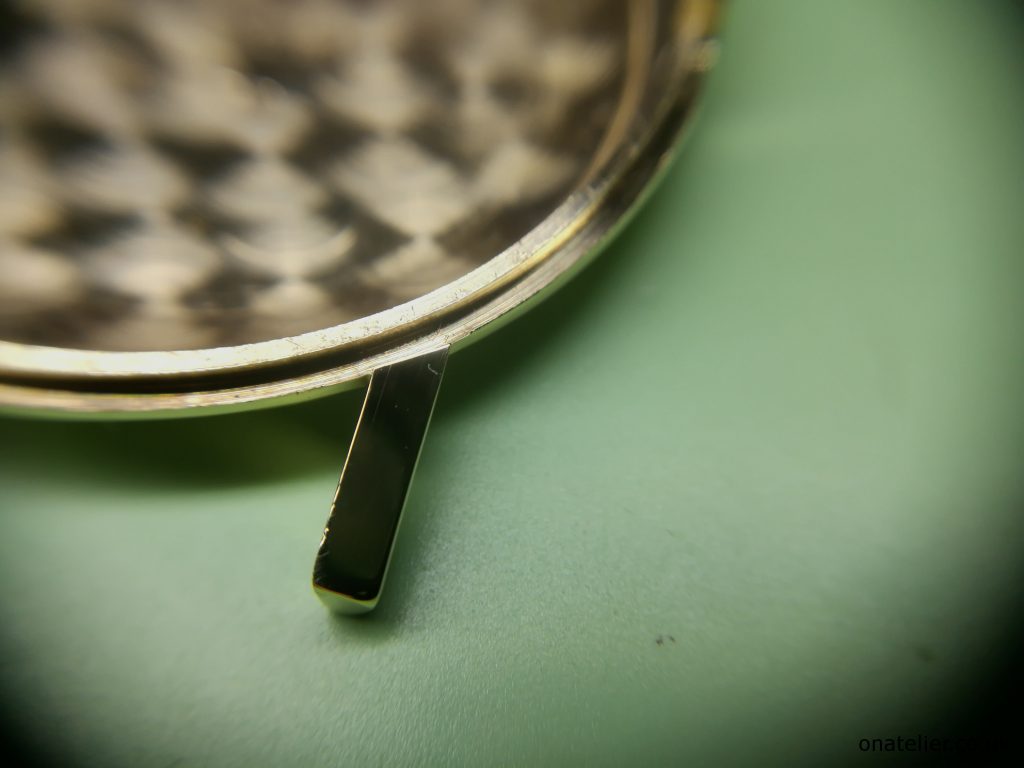 I also give the crystal a polish, and the work is now complete. 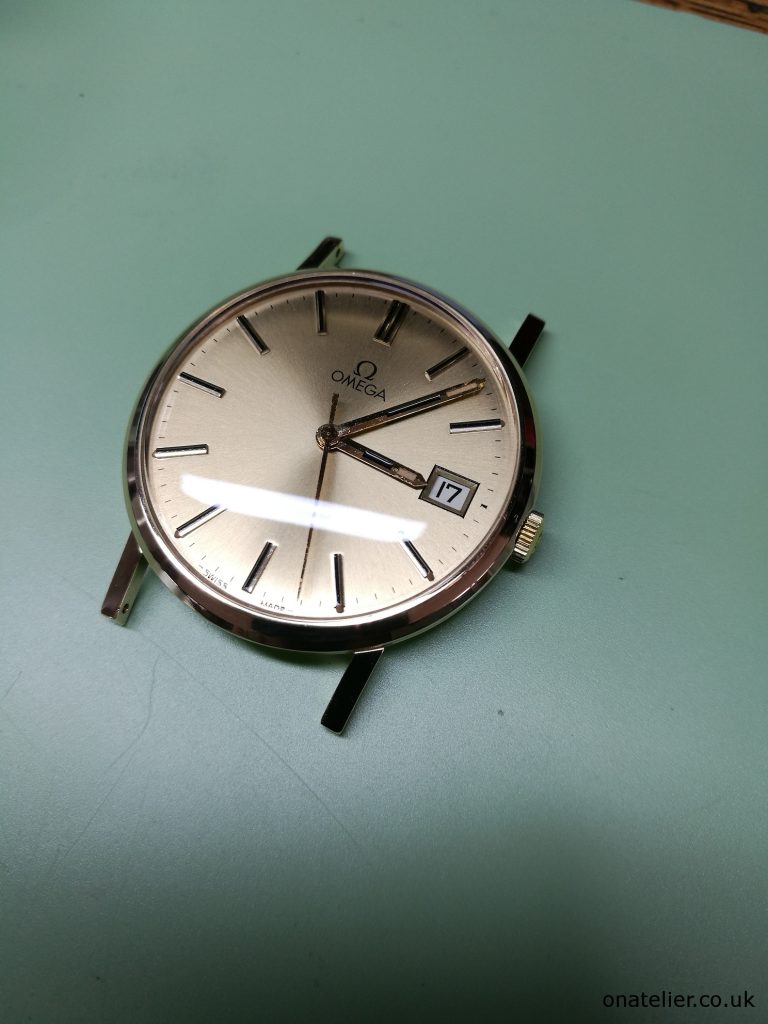 And now fitted with a new leather strap,  a real thing of beauty. 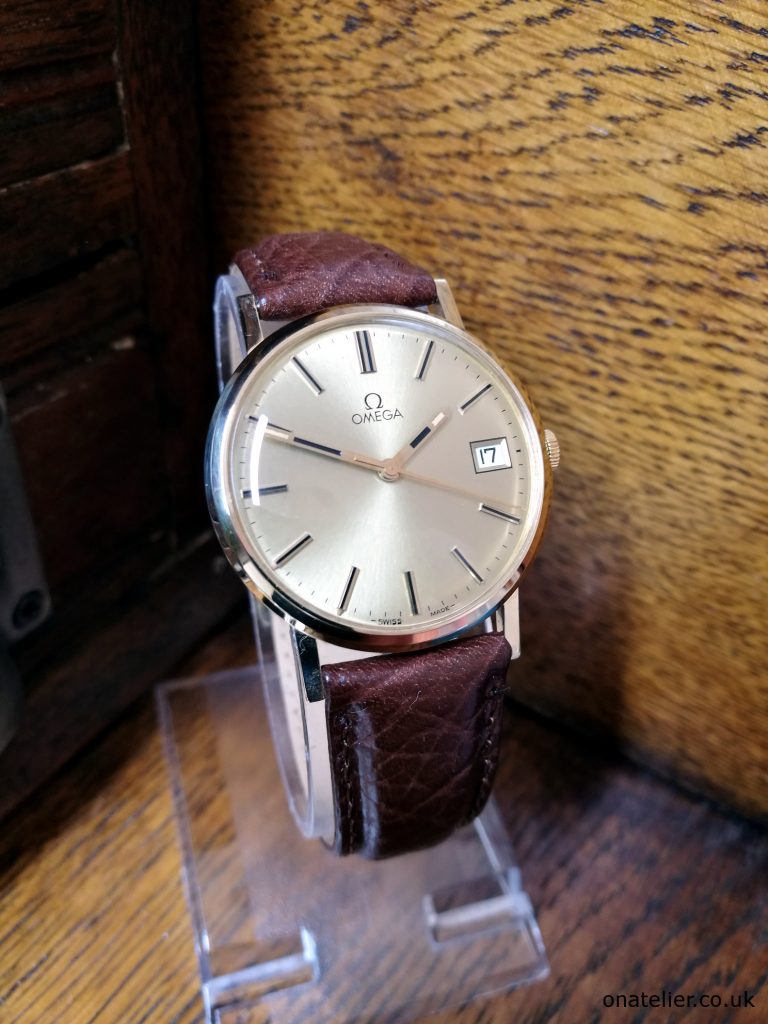