This week I have decided to feature another vintage Longines as they are such a pleasure to work on. This particular watch has a 9ct solid cold case and caseback, and it is powered by a Longines Calibre 284 movement. Very much like the Calibre 12.68Z I featured on the blog recently, this movement is from an era when Longines were very much at the high end of the market. The level of finish is very high. 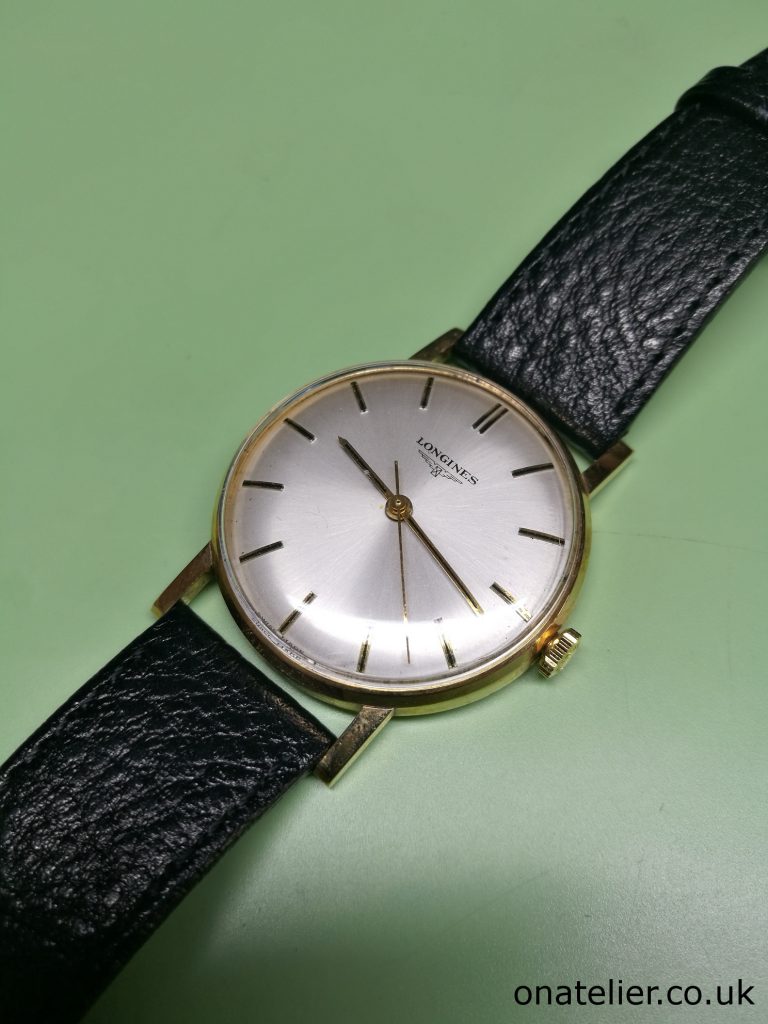 Before I start, a quick look on the timegrapher confirms that the watch is in need of a service, the amplitude is too low. However with a fairly consistent rate things are looking promising. 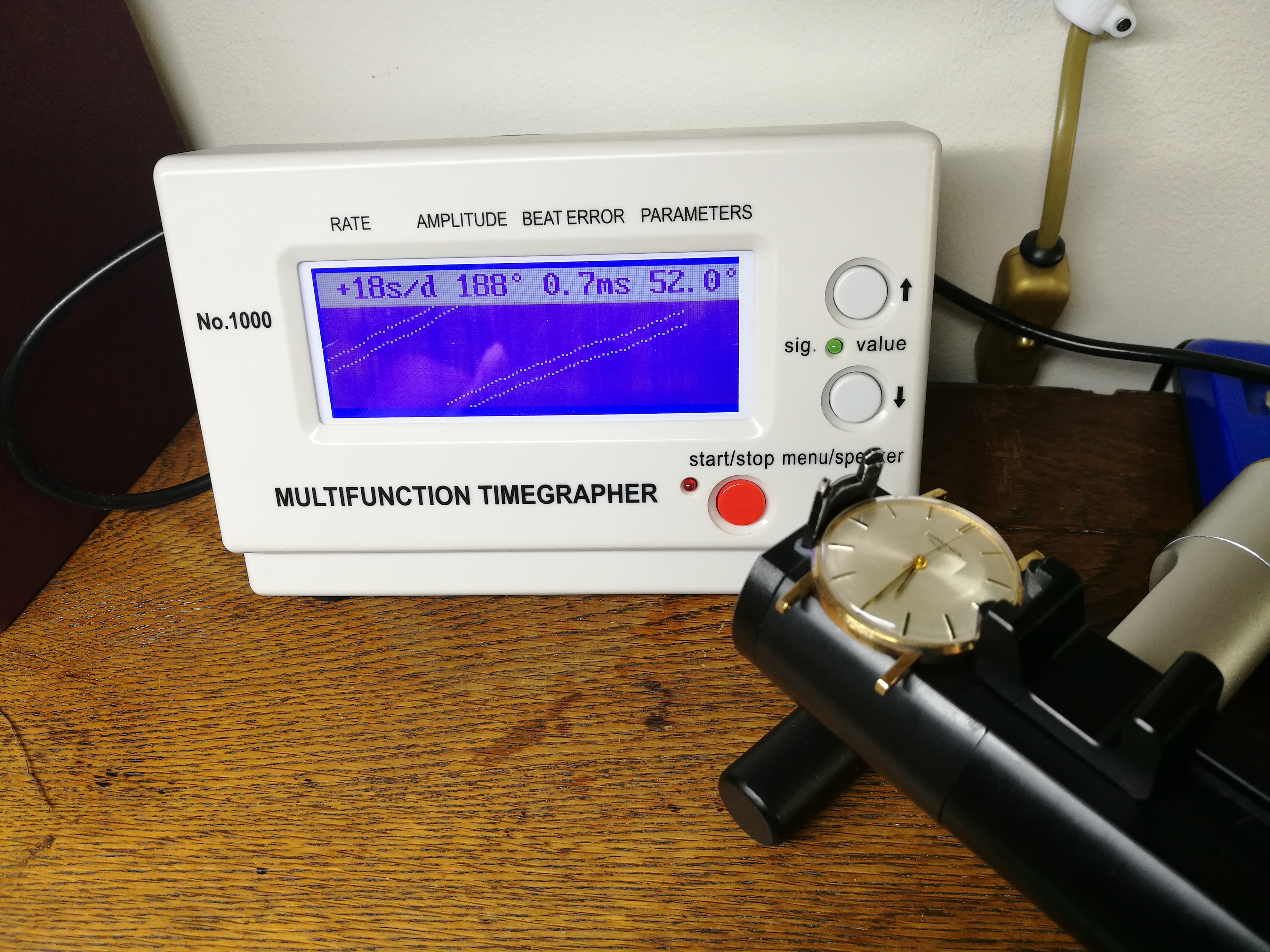 I start by opening the gold case, and straight away it is a very pleasing sight. Perlage on the caseback, brushed and polished finished on the movement, and sunburst grain the on ratchet wheel and the crown wheel. 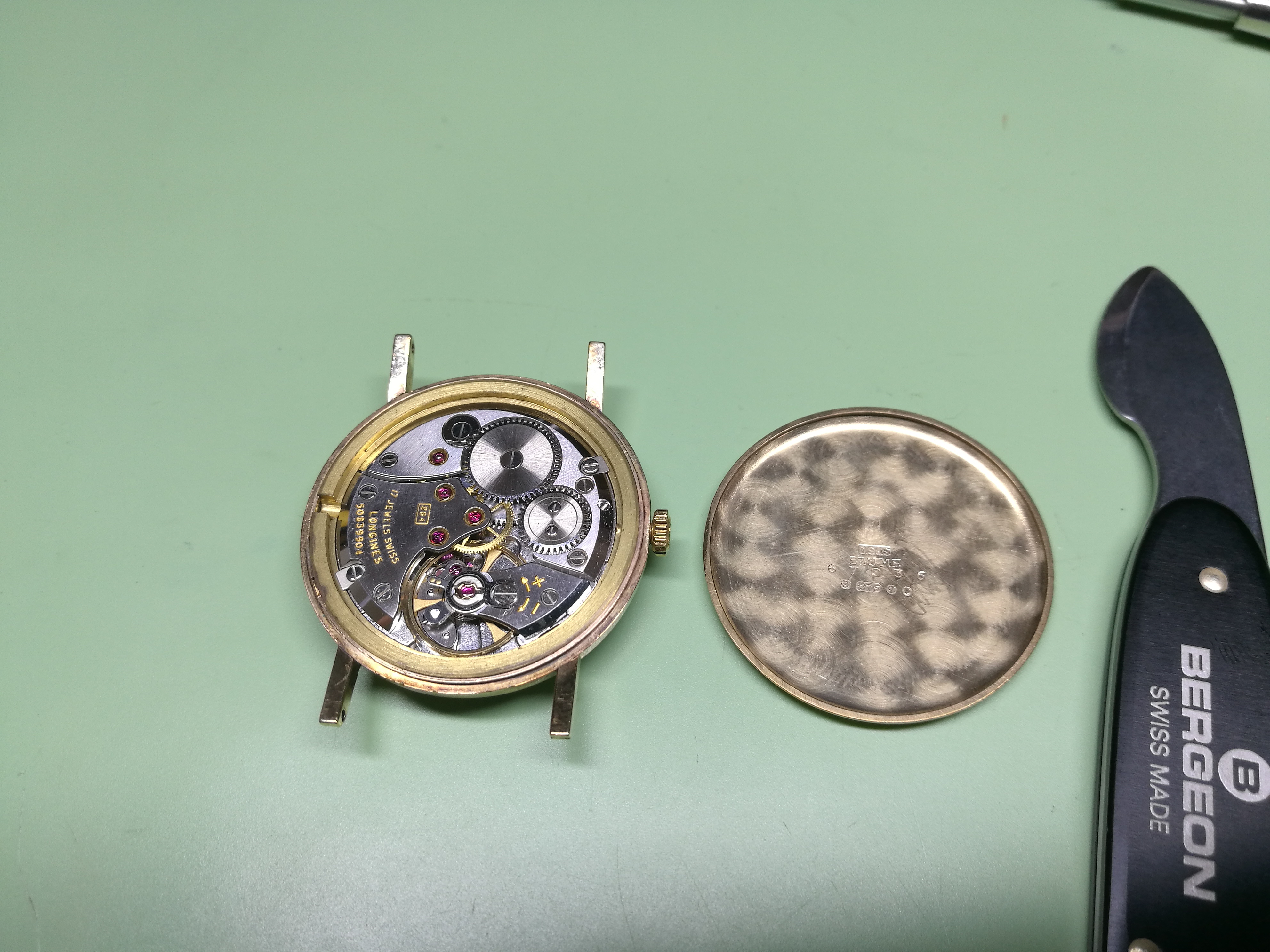 The solid 9ct yellow gold case is UK hallmarked with the London Assay office mark. It was made by David Shackman and Sons. The ‘DS&S’ stamp can be found to the inside of the case back together with that of ‘Baume’, who were Longines’ agent in the UK during that era. 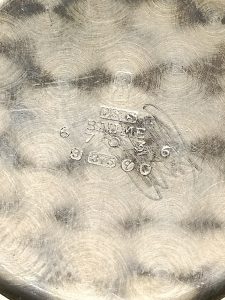 David Shackman & Sons were based in Chesham, Buckinghamshire UK, and were an independent case making company which supplied most of the major Swiss houses for use on their watches that were to be sold in the UK. These are commonly found on Jaeger Lecoultre, Omega, and Rolex watches to name a few.

I remove the movement from the case.

And after removing hands and dial, the strip down can commence, starting with the dial side. 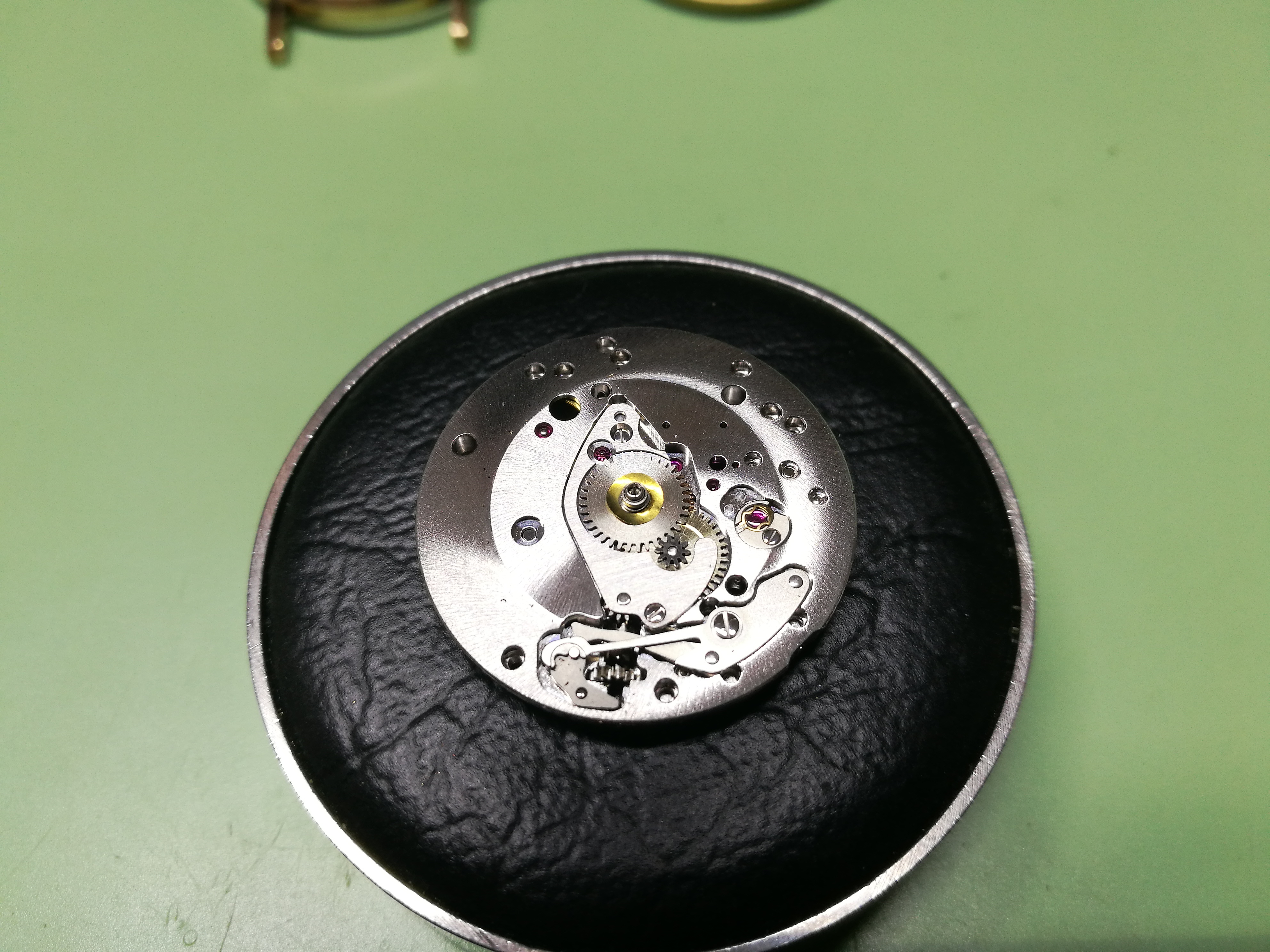 If a confirmation that the watch was in need of a service was ever required, this is it… these particles could cause havoc with the performance of the watch. They will also turn into an abrasive paste should they find their way into pivot holes and mix with the oil. 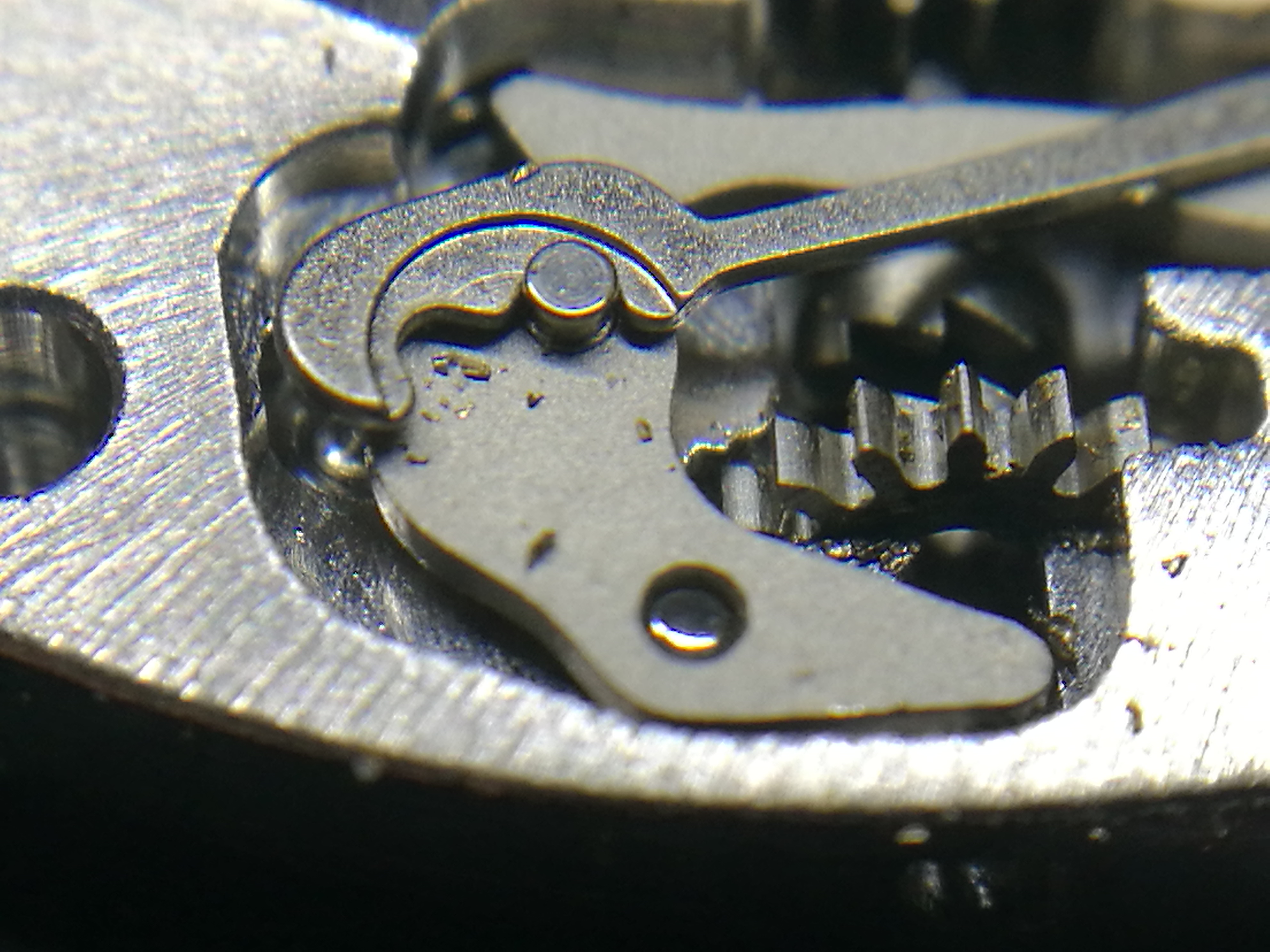 The disassembly continues. Hour and minute wheels and bridge have been removed, as well as some of the keyless work. 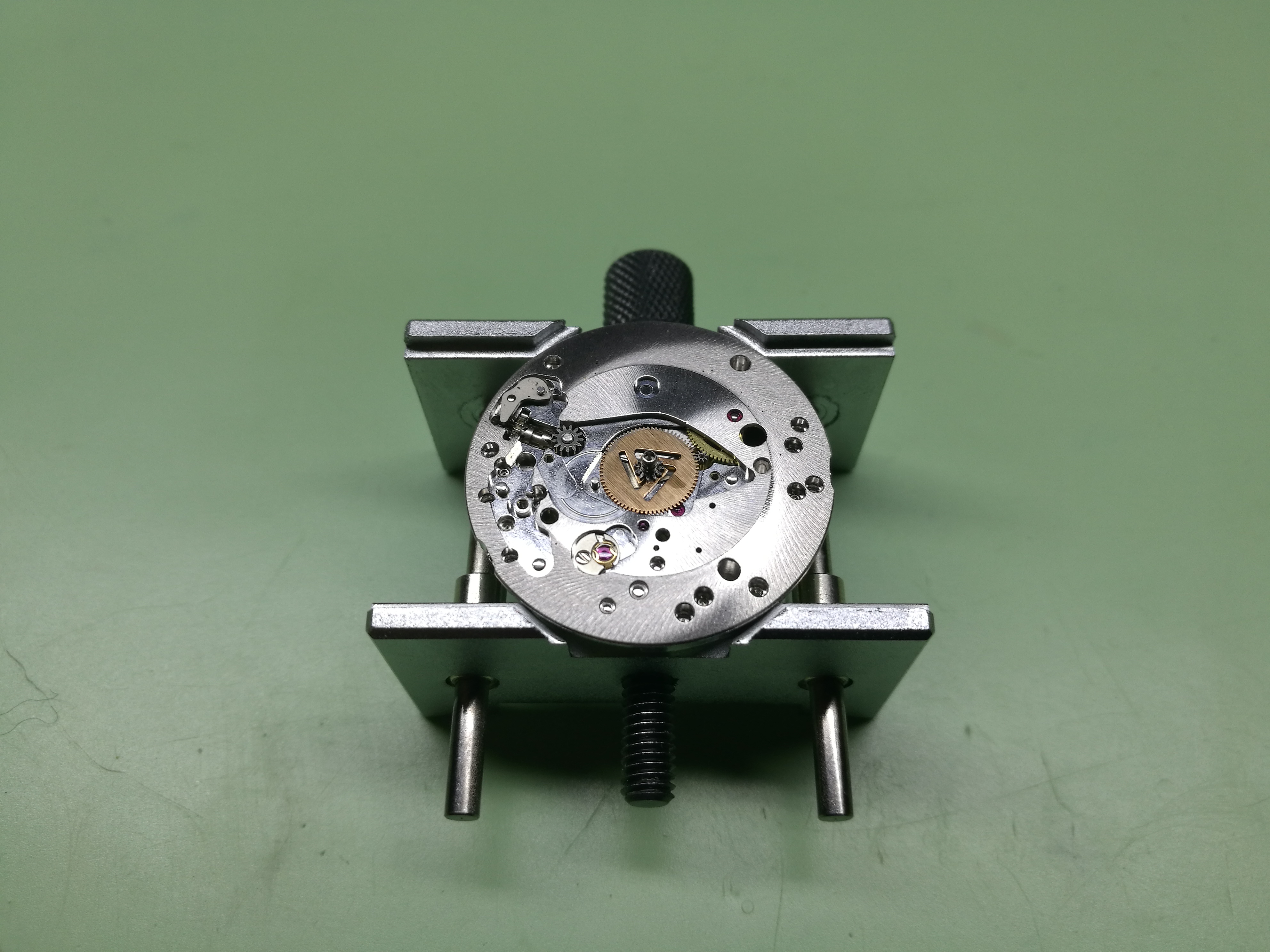 And with the dial side completed I move on to the other side of the movement. I remove the balance wheel. 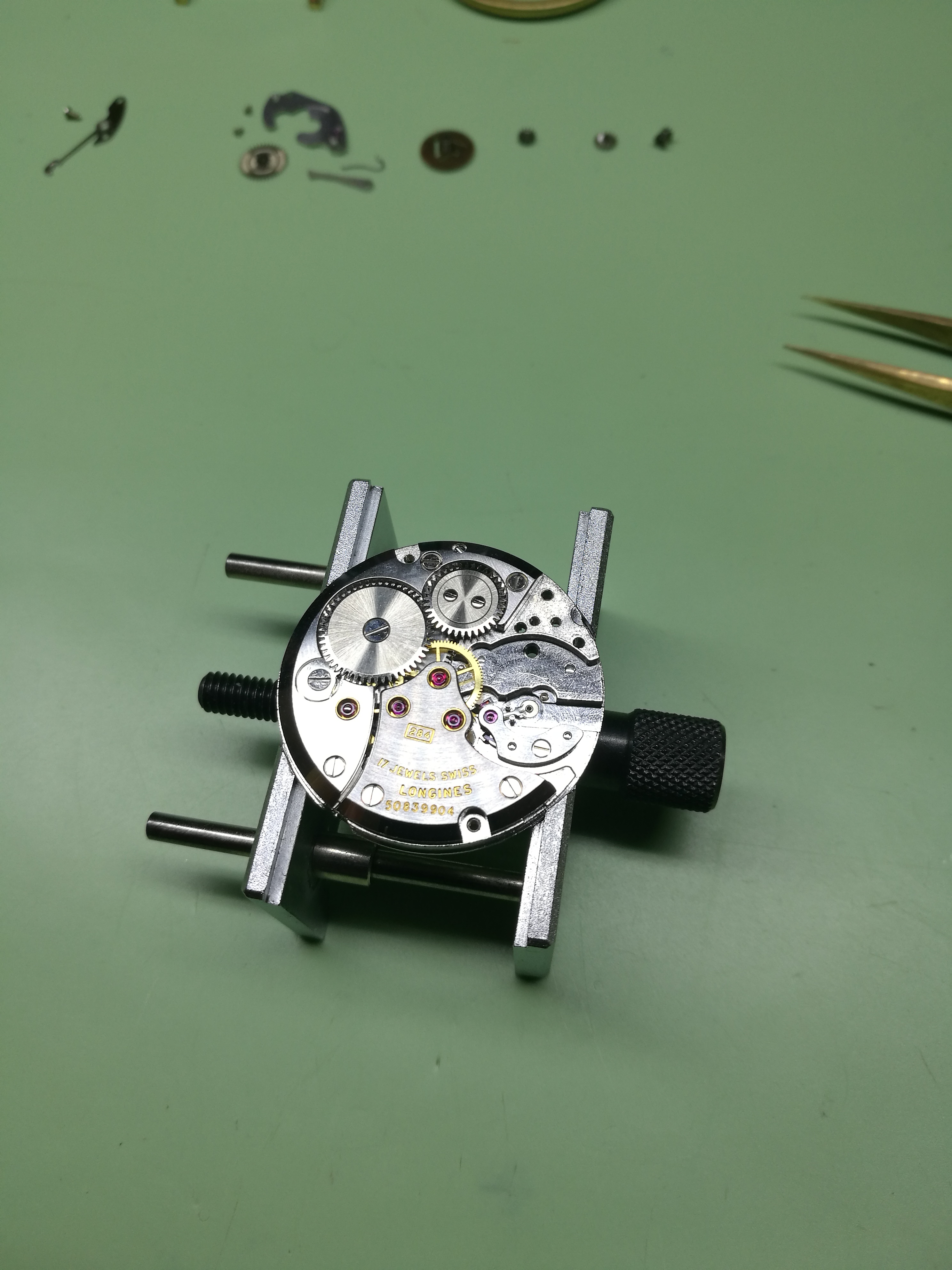 I then remove the ratchet wheel, crown wheel and barrel bridge. 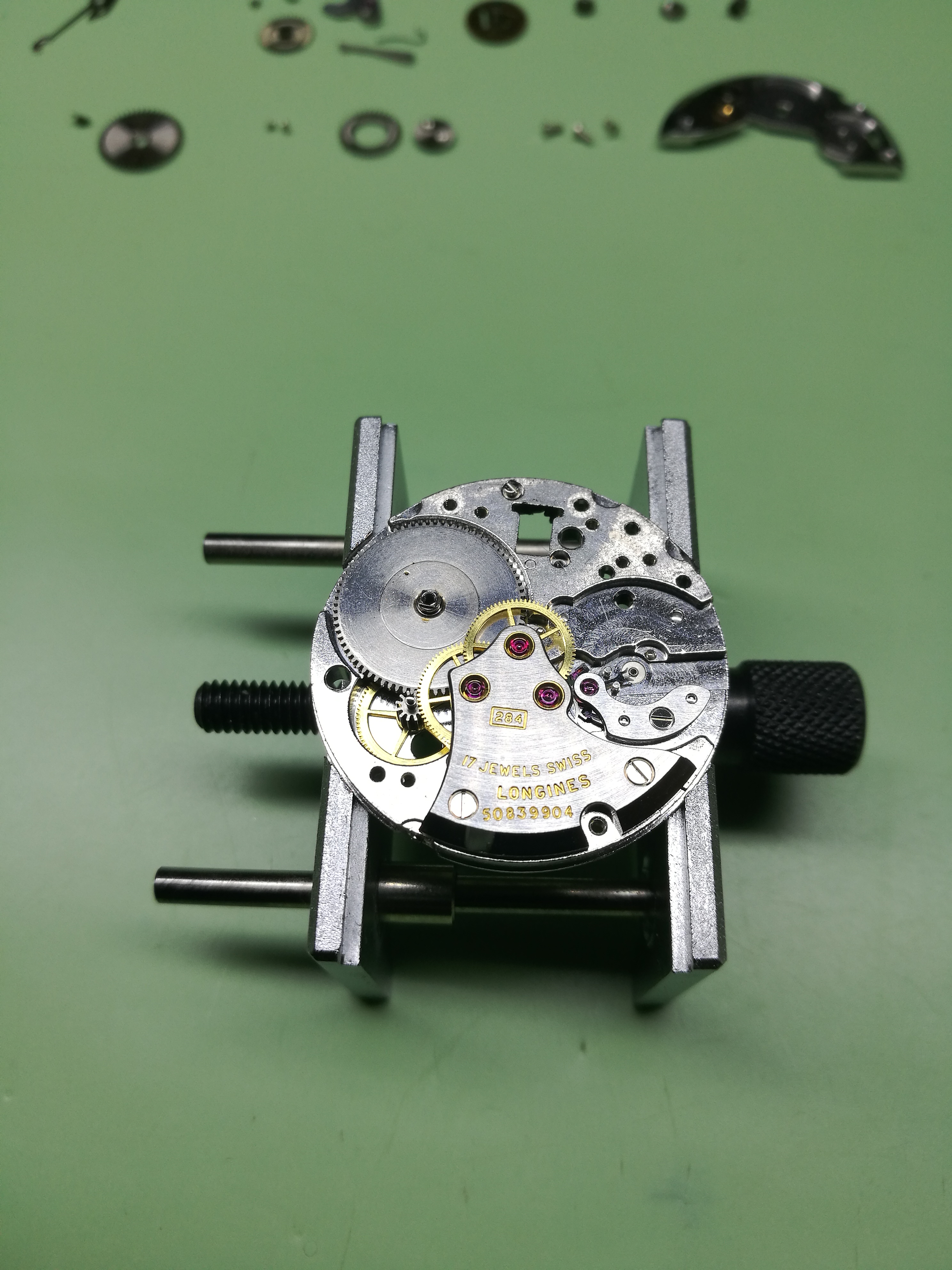 With the train bridge out of the way you can see the wheel sequence. 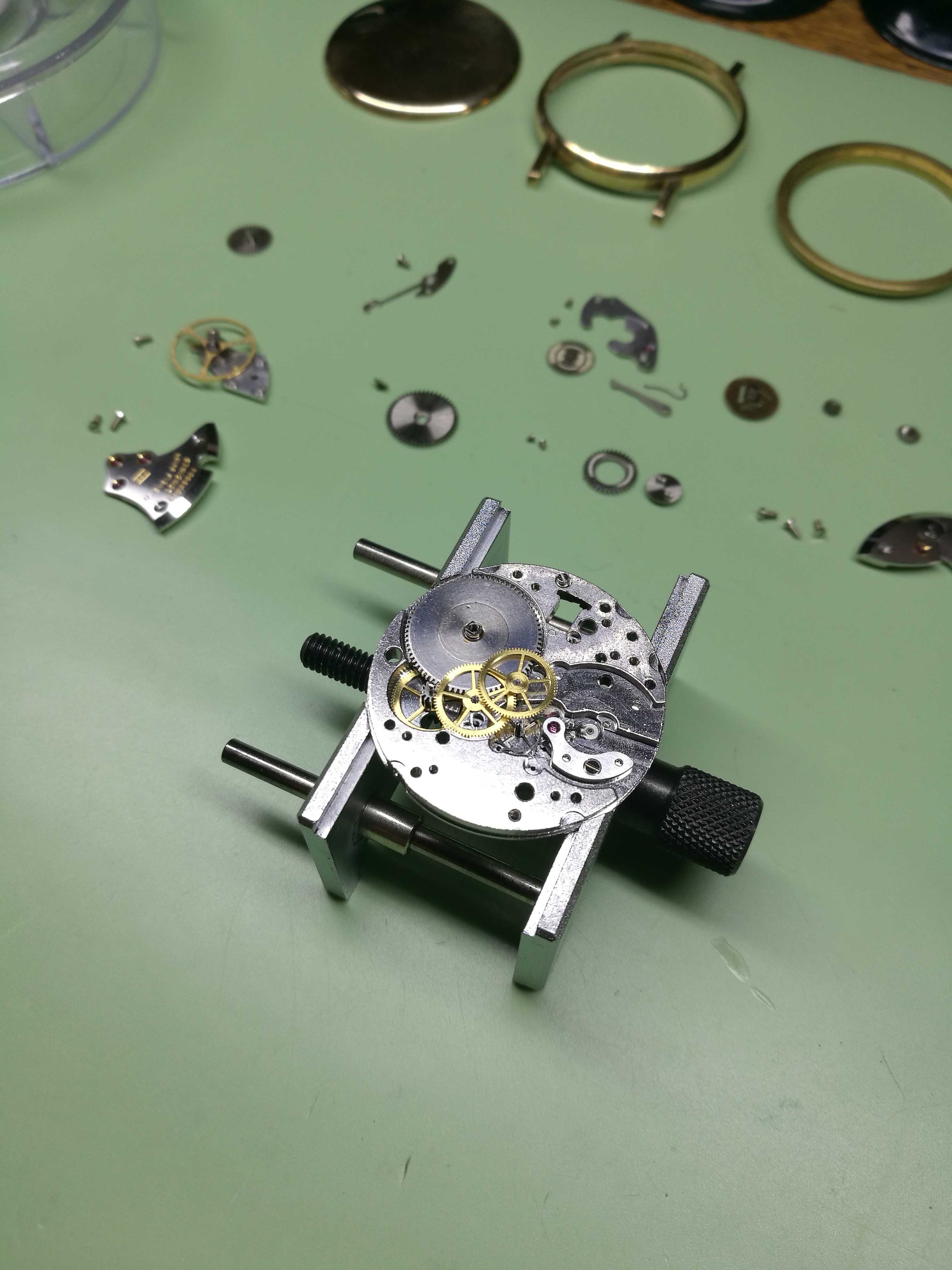 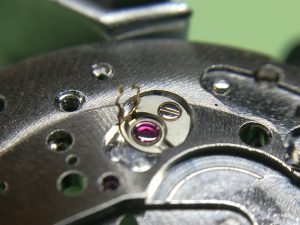 Time to remove the balance cap jewels after releasing the incabloc spring. I do this for both jewels, on the main plate and on the balance cock.

And finally I strip the mainspring. Note the inscription “Self lubricated mainspring” on the lid. I believe these were meant to be sealed units, however the chances of finding a replacement unit are slim to non existent, so I will strip the barrel. the lid pops up easily as with any conventional barrels. 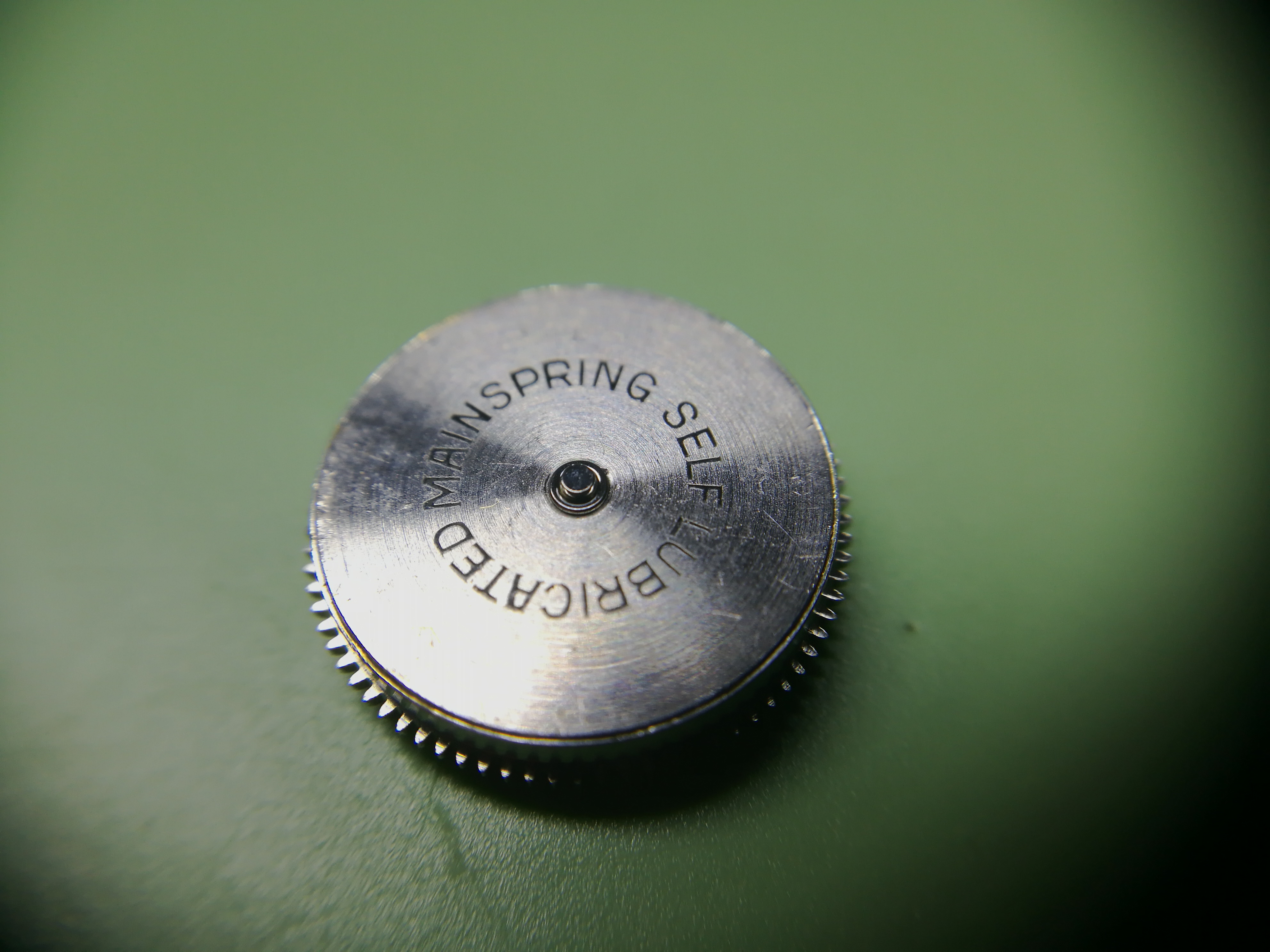 Et voila, the movement is fully stripped, and ready for cleaning. That mainspring does not look right to me so I will replace it with a new one. 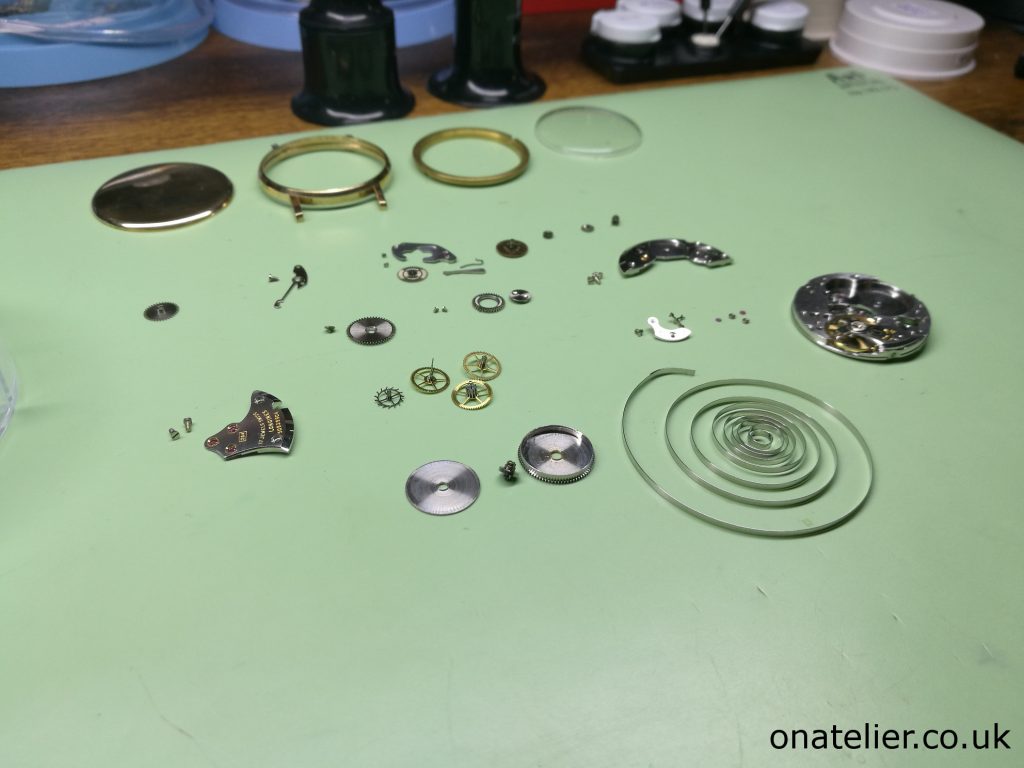 The parts are now clean and under cover, and I start by assembling the dial side. 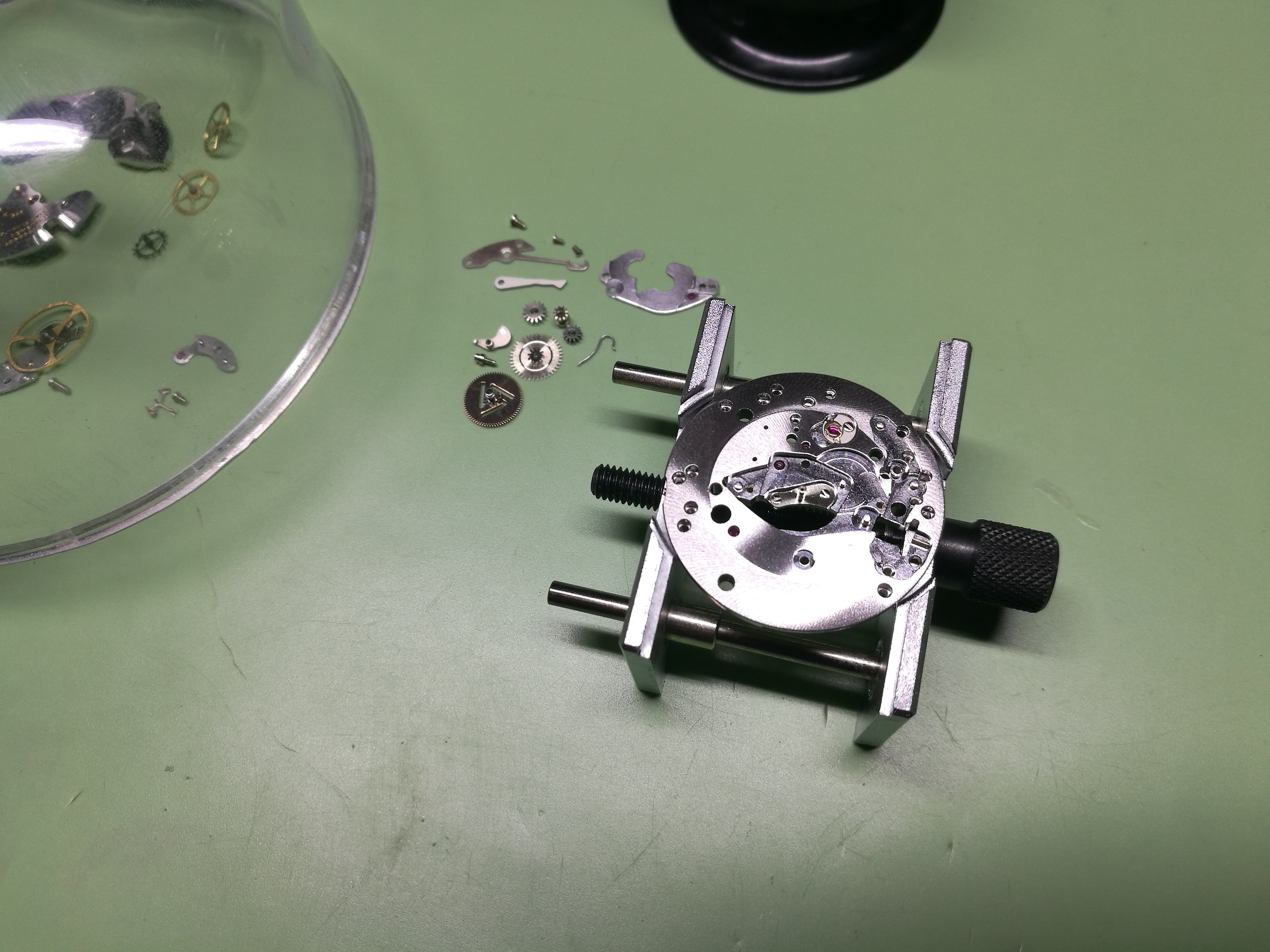 Note that on this movement the lower third wheel jewel is located on the cover plate of the minute wheel. So I have to assemble more than I typically would at this stage before moving on to assembling the train wheels. 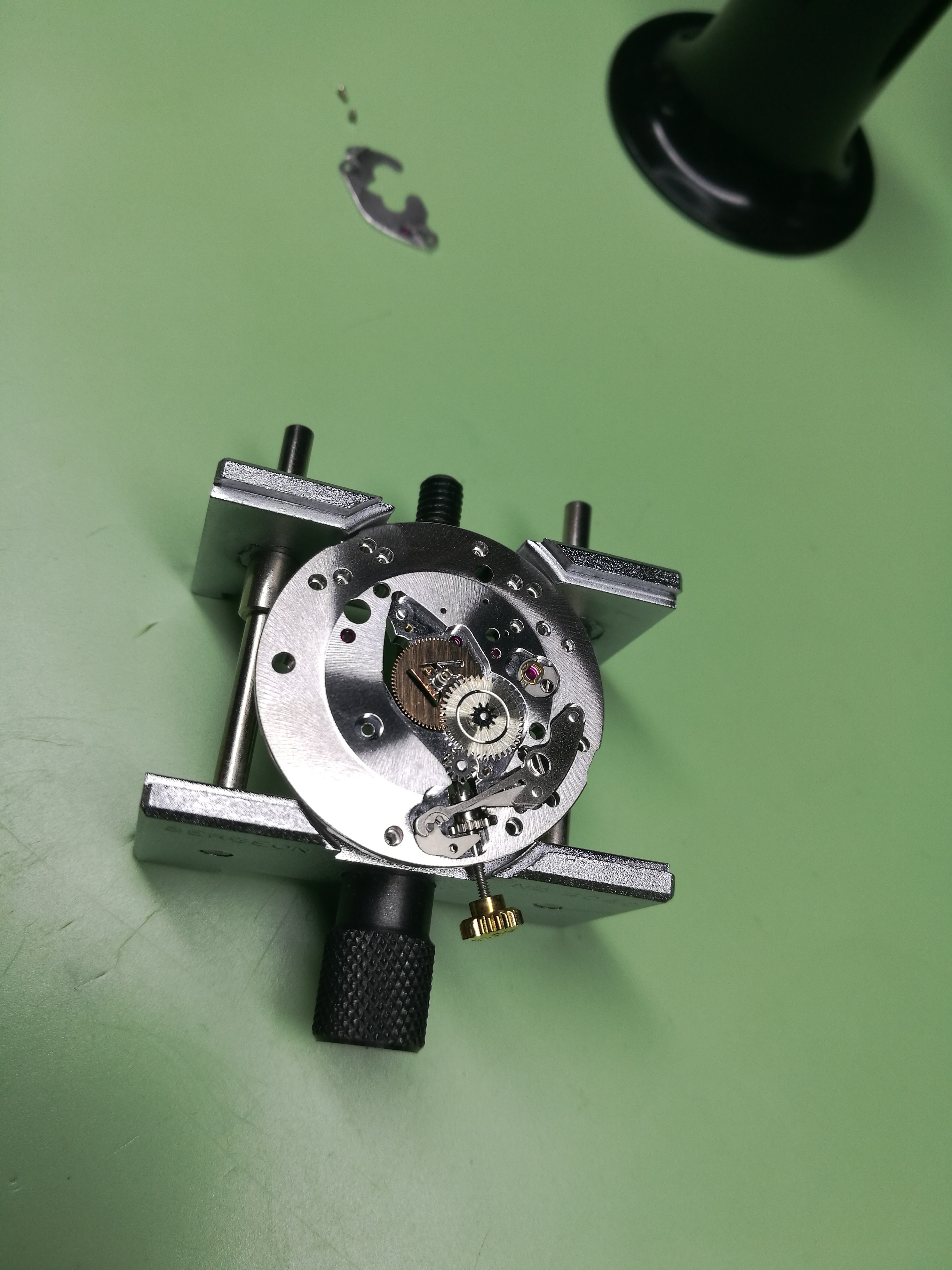 And this is the dial side now fully assembled. 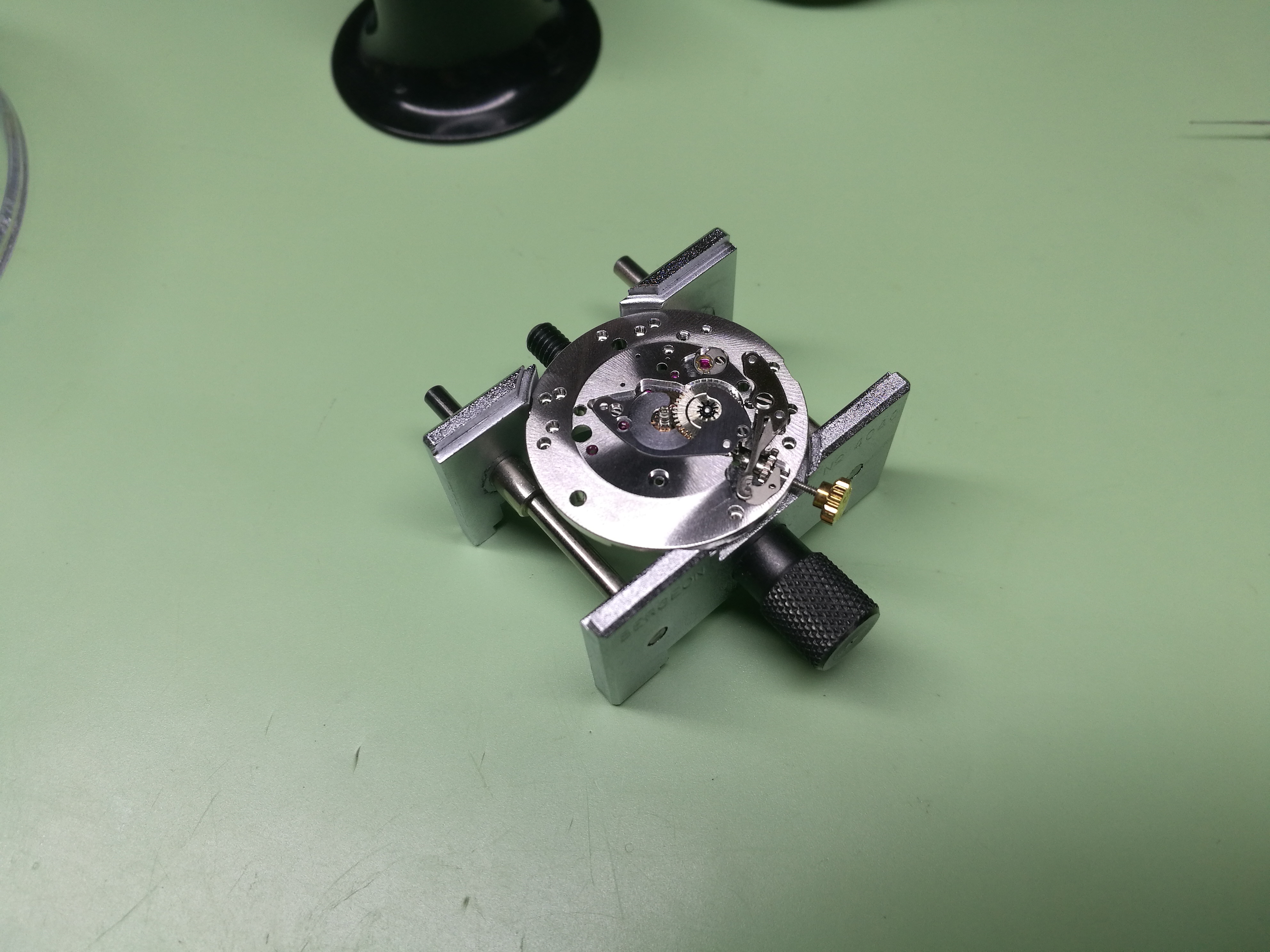 I can now move on to the other side of the movement and build the train, starting with barrel and train wheels. 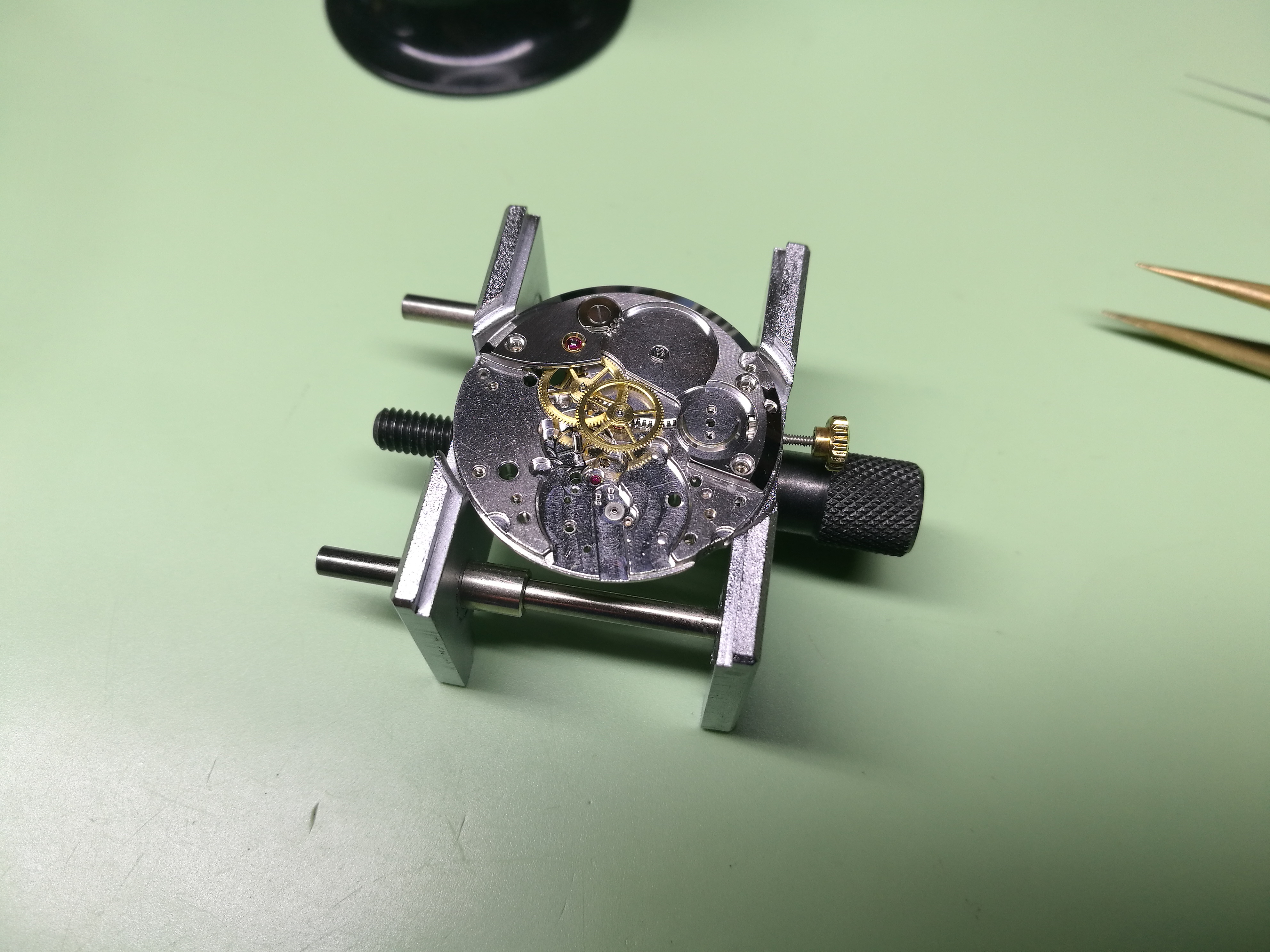 Train bridge now in place. At this stage I always have another check of the endshakes of the train wheels. In this case, everything runs freely as it should. 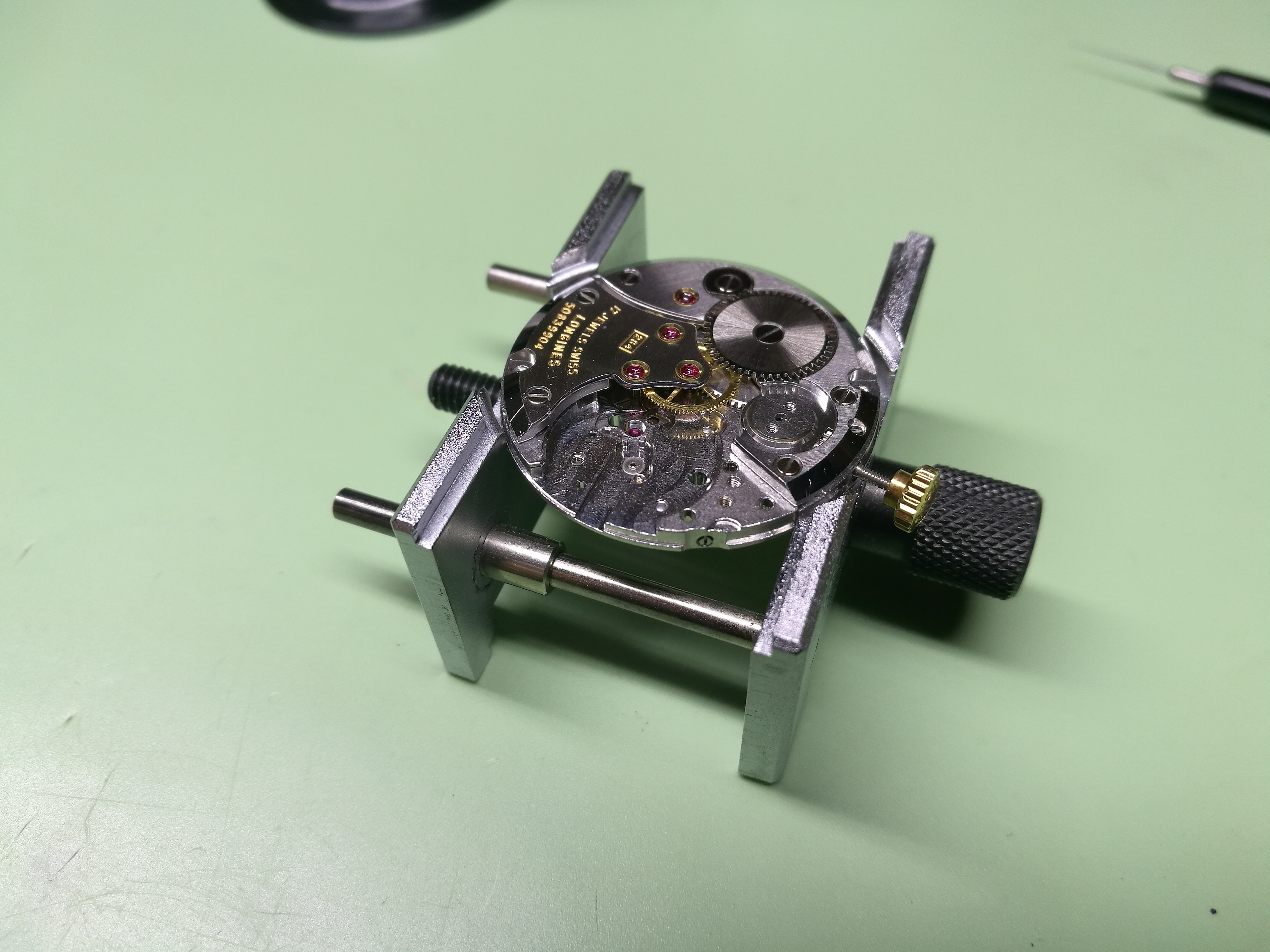 And after fitting the pallet and balance wheel the movement ticks again. The movement has responded very well to the service, the amplitude is excellent (above 300) and after regulation and adjustment the positional error is very small (it is the difference in timekeeping between different positions). 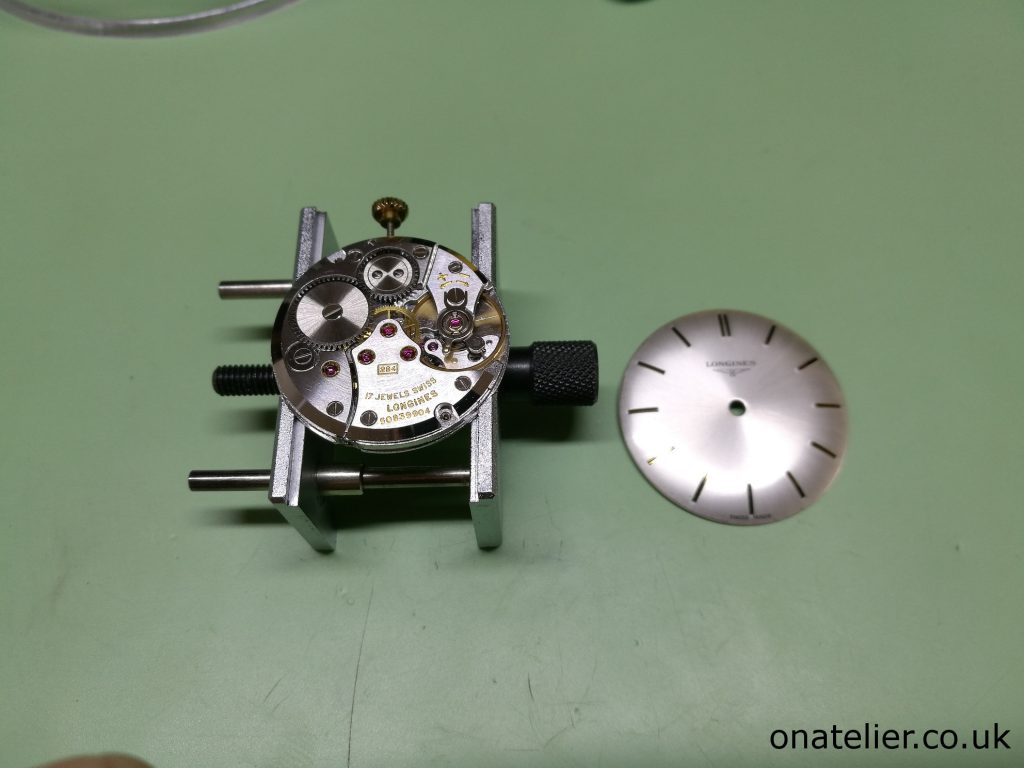 Dial and hands are fitted. I give the dial a very light clean with Rodico. It was in very good condition but had a few localised small spots of grime. 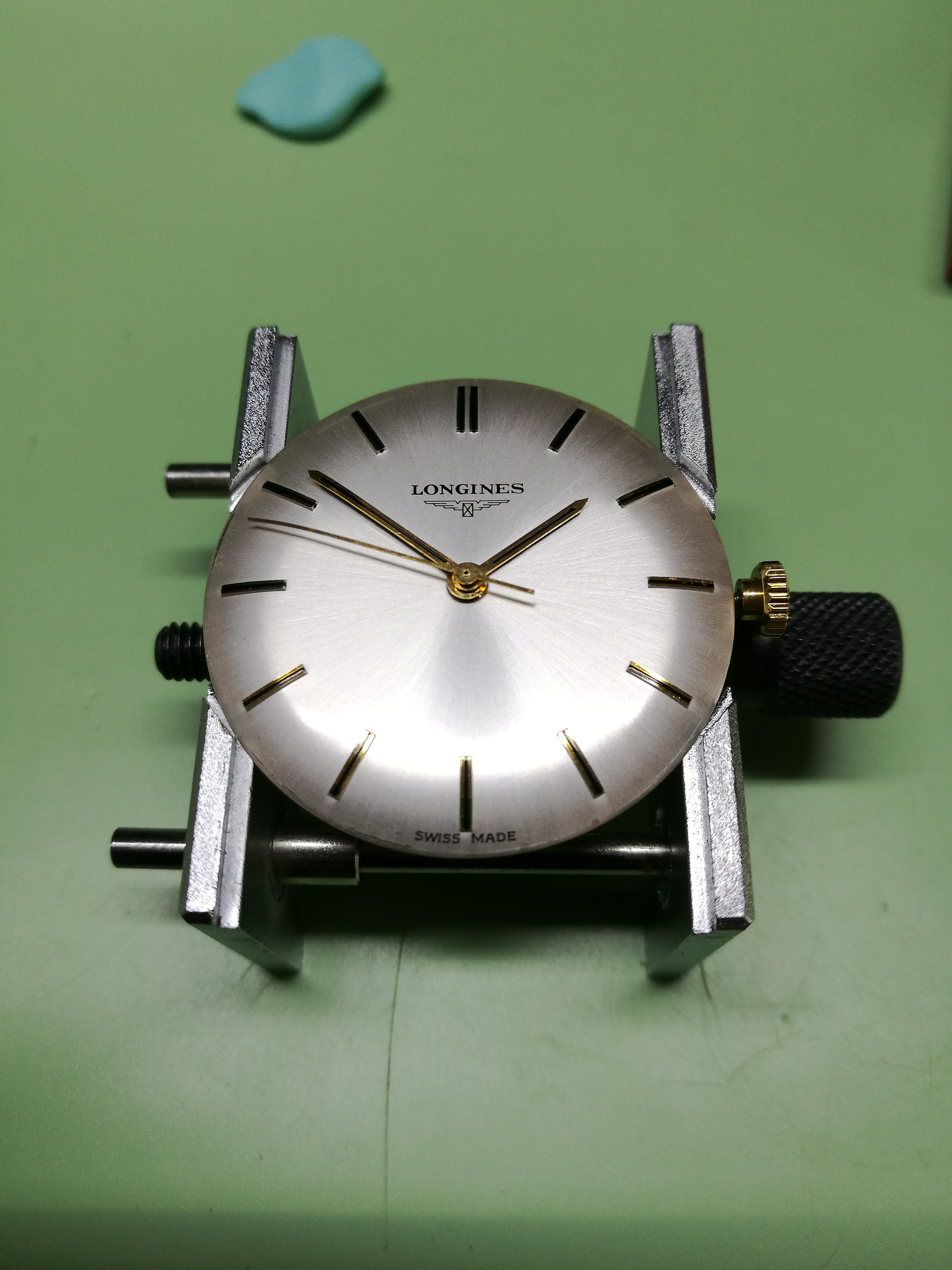 I now turn my attention to the case. It is not in bad condition at all. 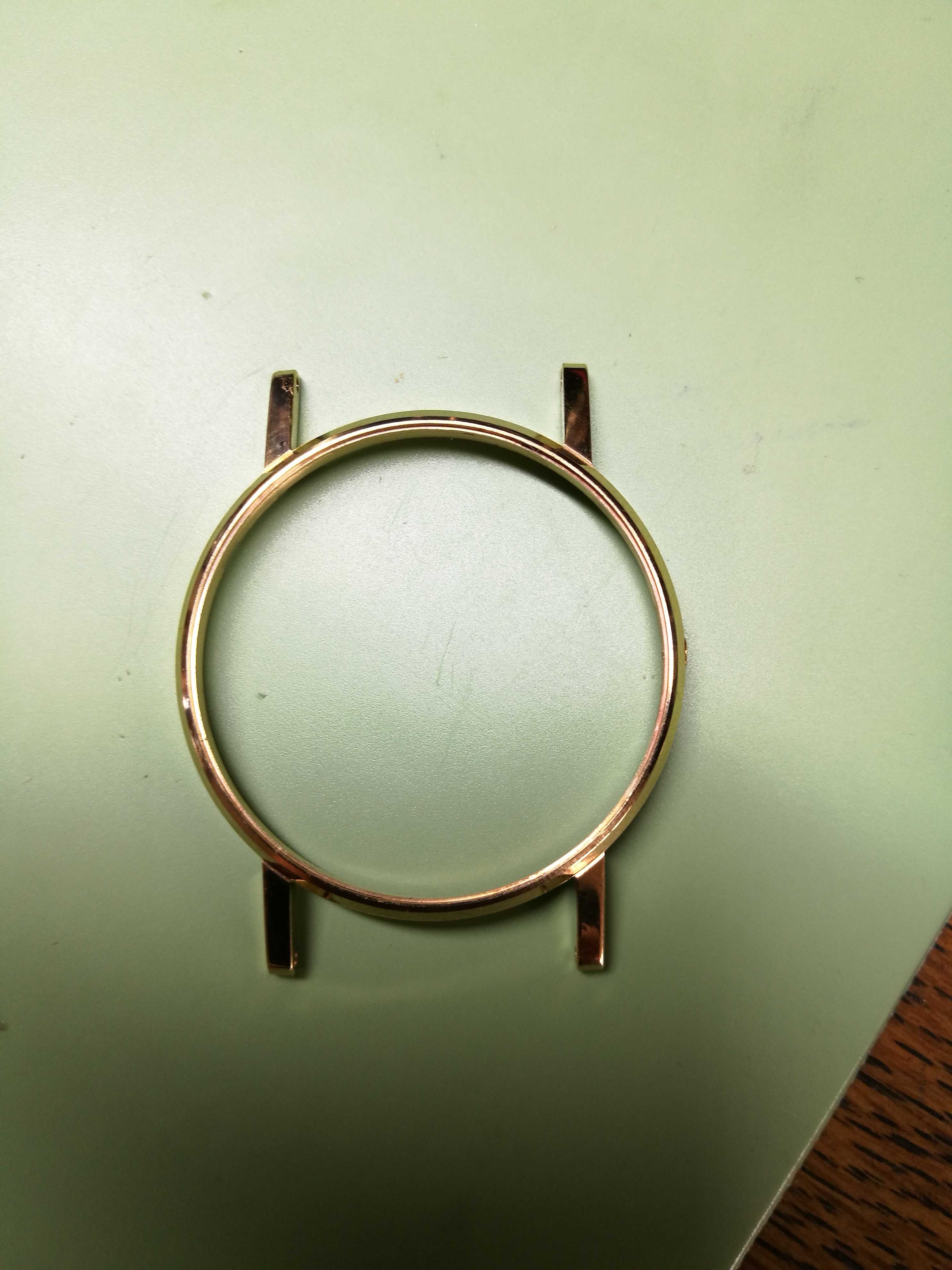 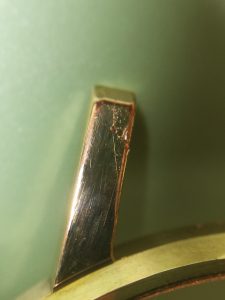 Unfortunately this scratch on the lug lets the watch down a little bit, this can be polished out. 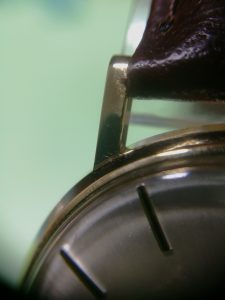 And after. Much improved, without removing too much metal.

And here we go, we now have a  very shiny gold case, ready to receive the crystal. I use a crystal remover tool, which has jaws to squeeze the crystal back into the case. 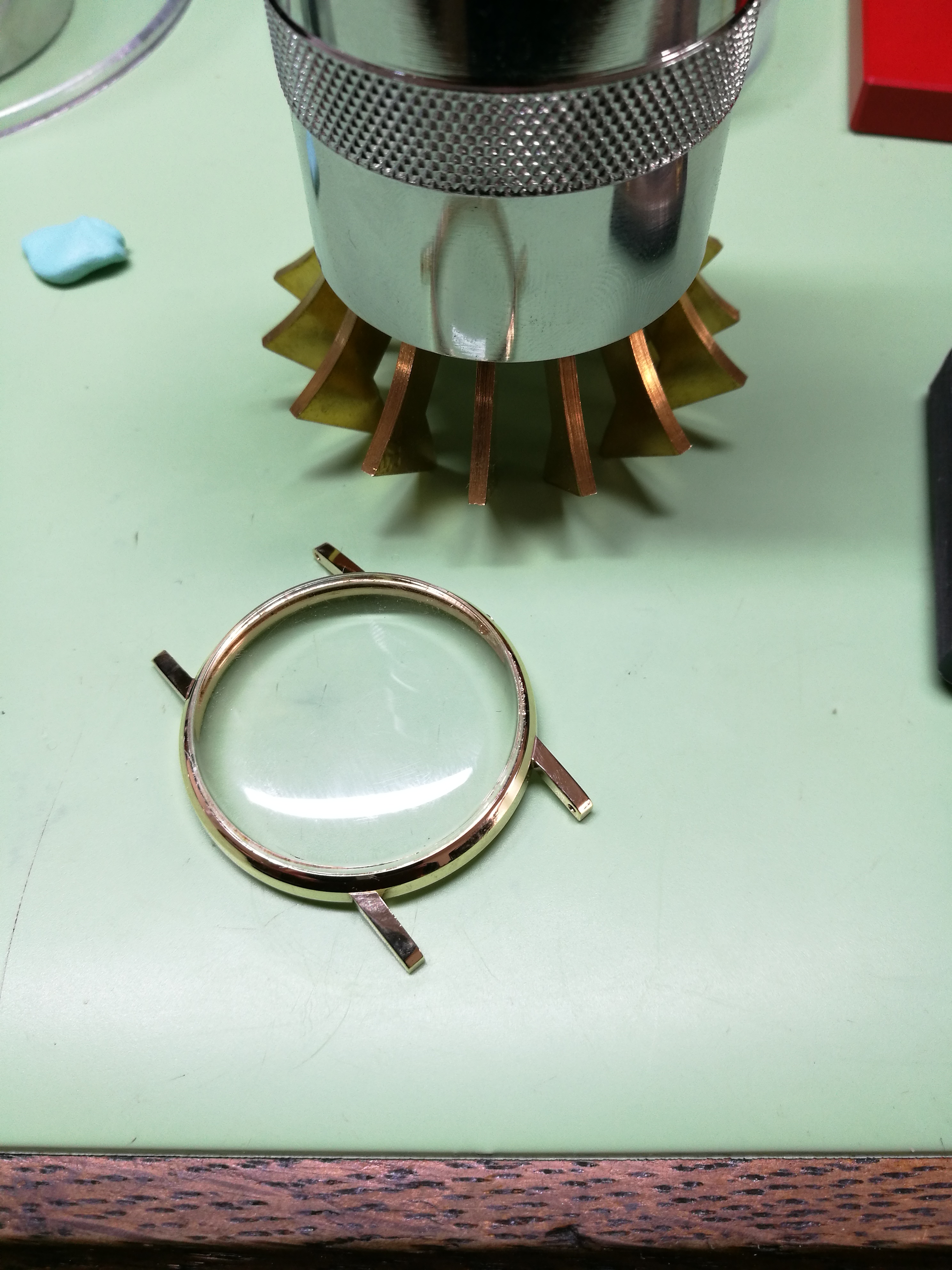 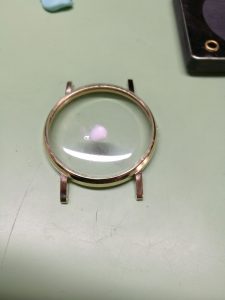 A quick polish on the crystal to make it look as good as new.

And the movement is fitted back into the case. 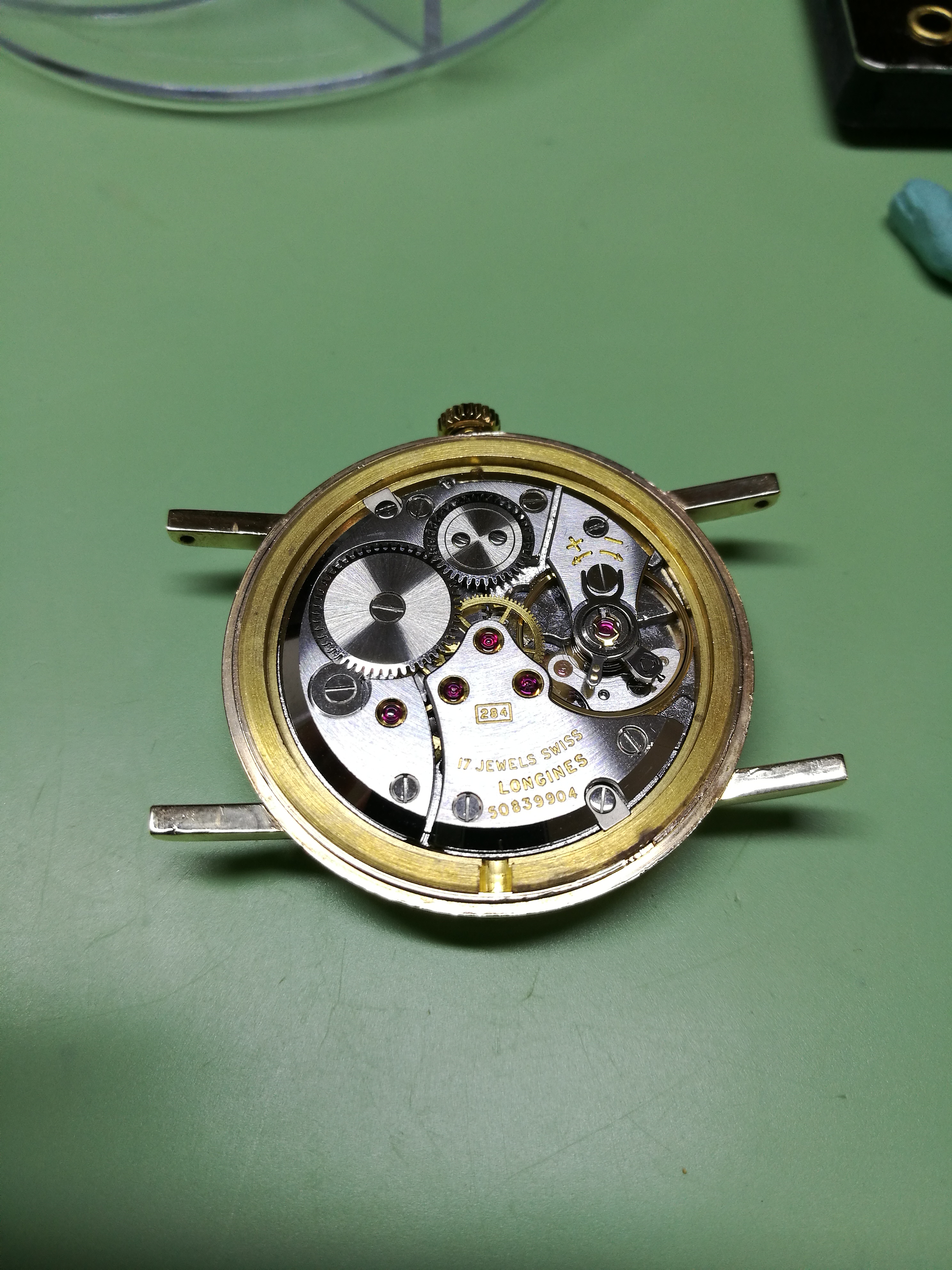 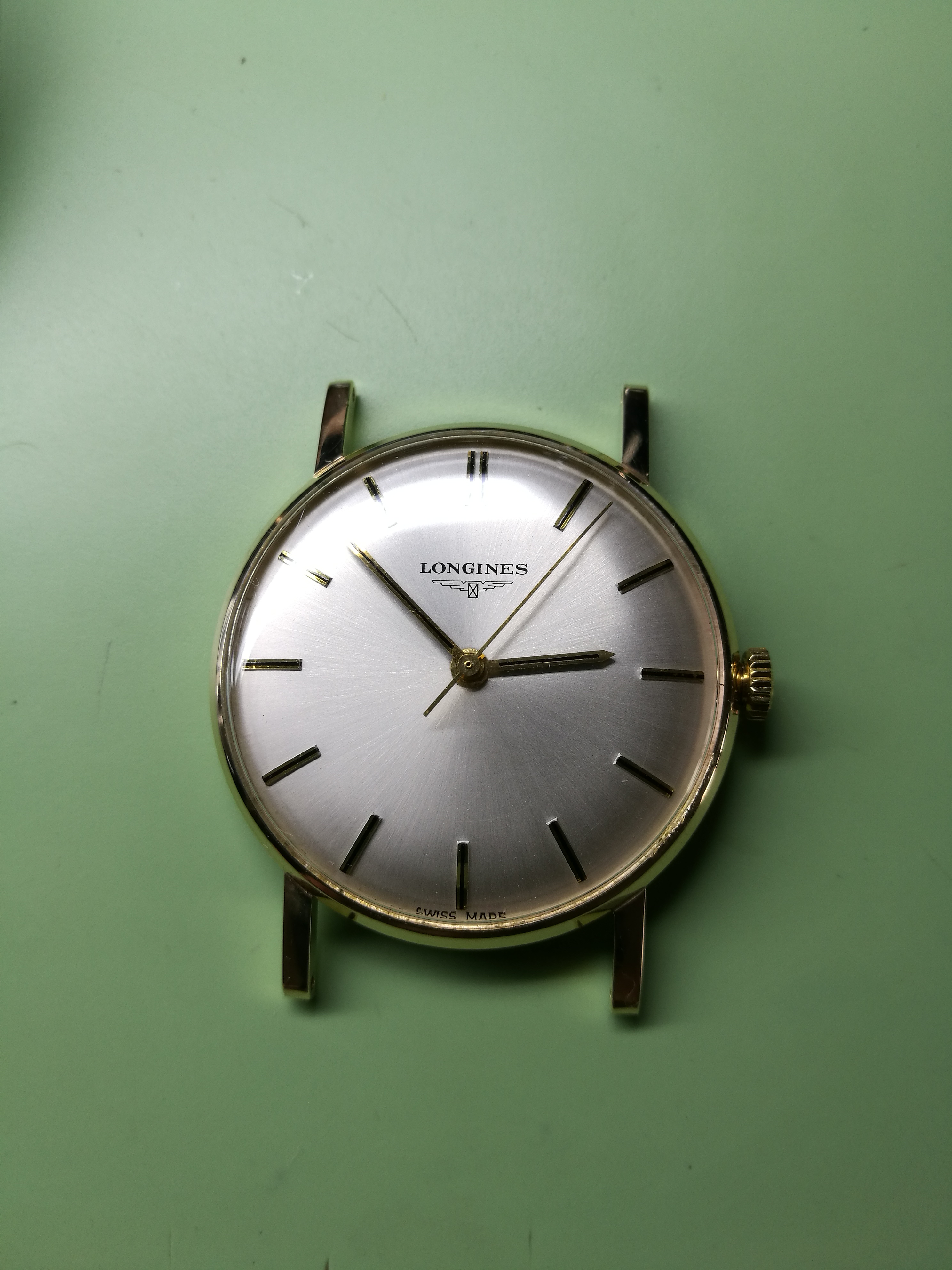 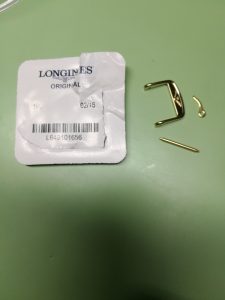 As I own this watch, I decided to treat it to a new brown leather strap and a Longines buckle (note the gold plated spring bar, now that is attention to detail!)

And here is it on the bench, finished and looking fantastic. The perfect dress watch. 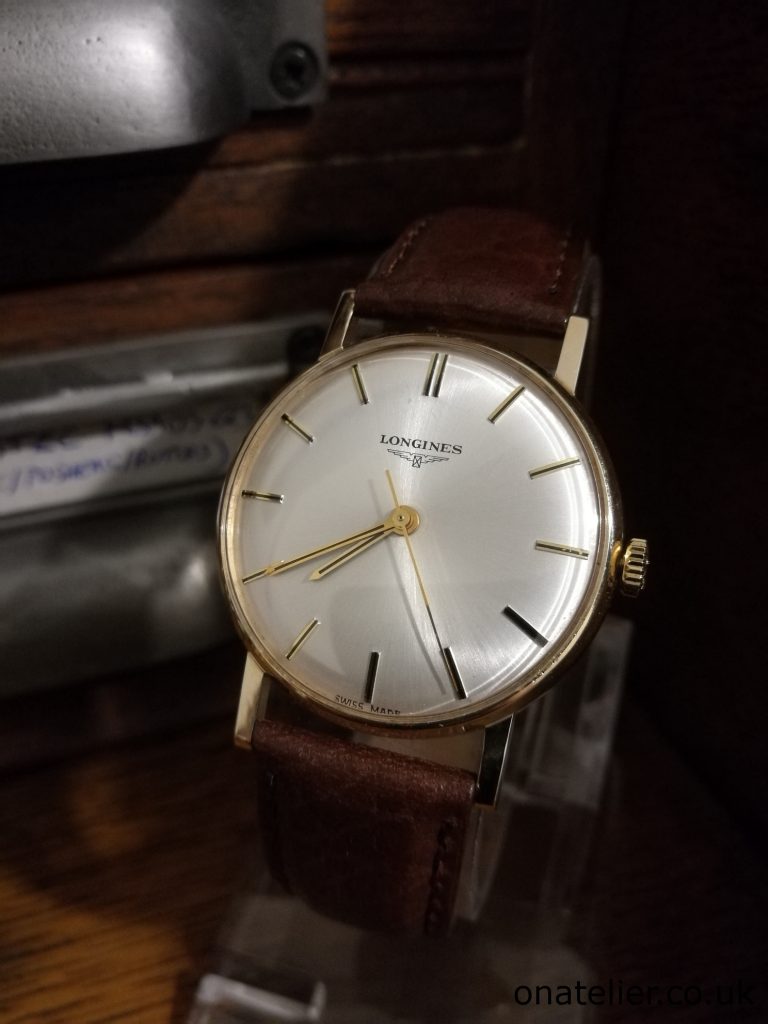