This  Longines Calibre 12.68Z watch dates from the 1950’s. It is entirely original. During this era Longines were very much at the high end of the market, and from an horological perspective I find these older models much more interesting than their current offering. This is a “before and after” photo. 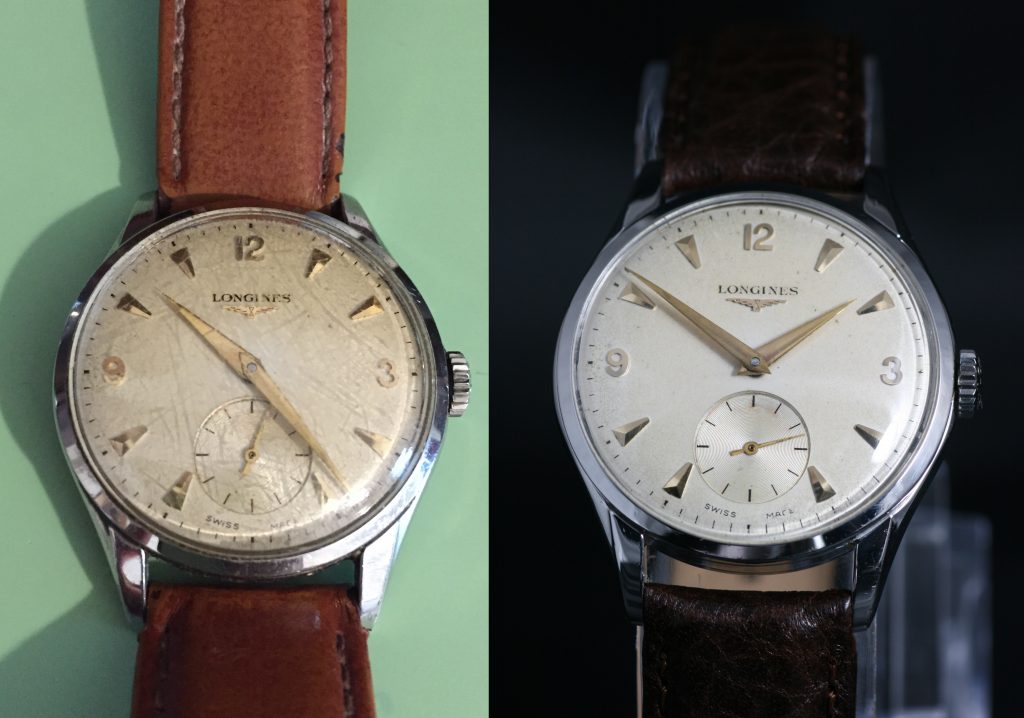 The watch showed a lot of wear and tear and signs of ageing, however it was running.  Appearances can sometimes be deceiving, as after placing the watch on my timing machine it turned out that it was not running too badly at all: the rate was very consistent, with two nice straight lines. However, time keeping was out, amplitude was on the low side, and beat error high, so all of this will be addressed as part of the service. 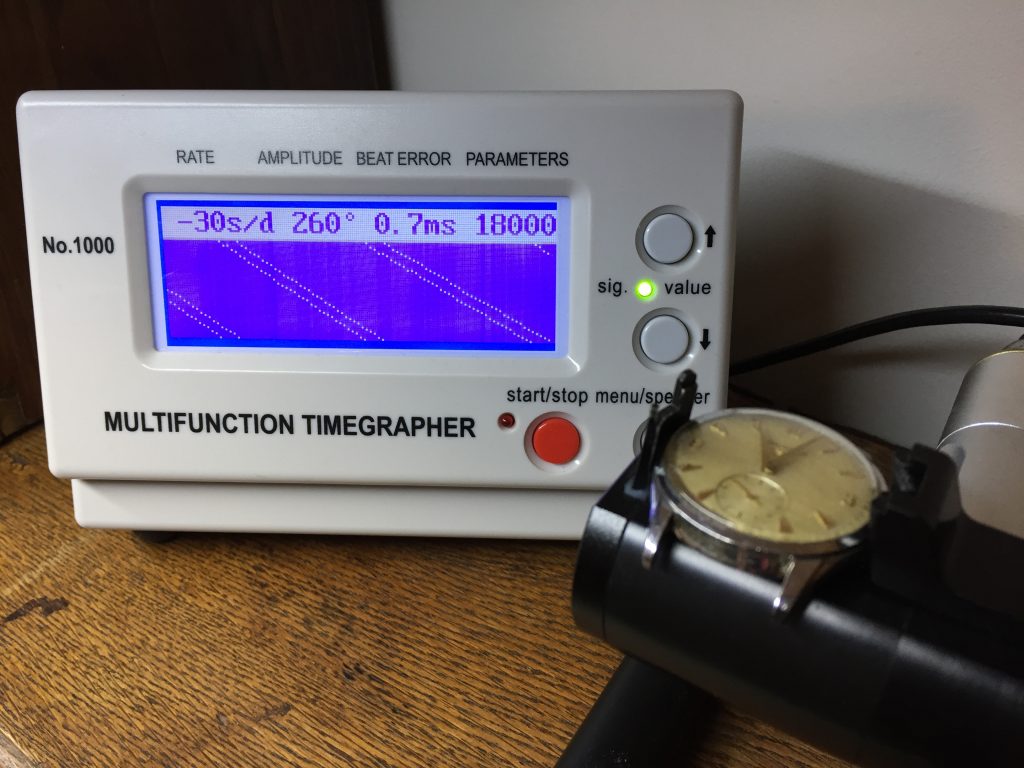 I start by opening the case. What was inside was rather beautiful. You can see some perlage on the inside of the case back, and the beautifully finished 12.68Z caliber.

Note the different grain finishes used on the various components of the movement. 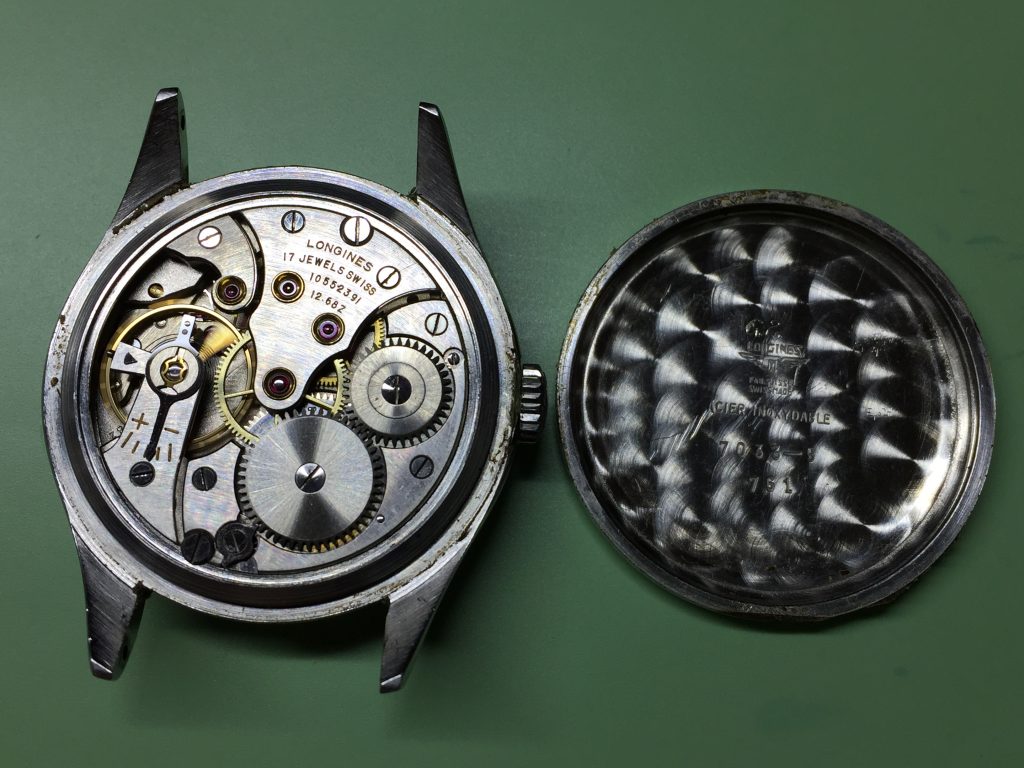 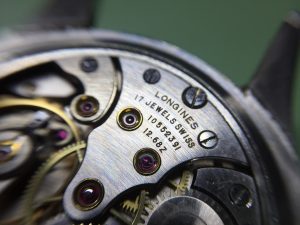 Circular brushed finish on the bridges. 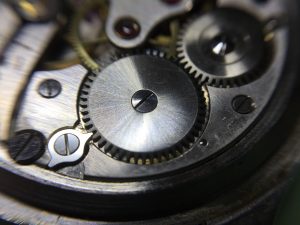 A lovely sunburst finish on the ratchet wheel.

The movement is de-cased. The dial has signs of ageing, hopefully some of this will clean up, as I wish to keep this watch original. 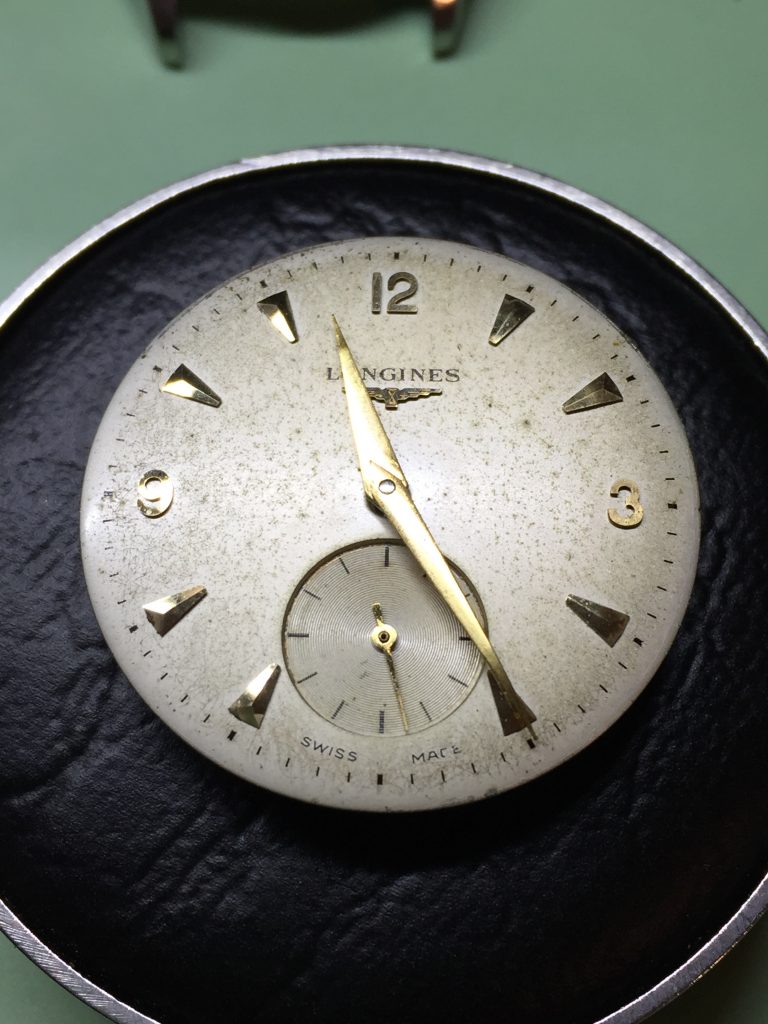 Hands are gently pulled out to allow the dial to be removed. I use hand levers and a polyethylene layer to avoid marking the dial during this operation. 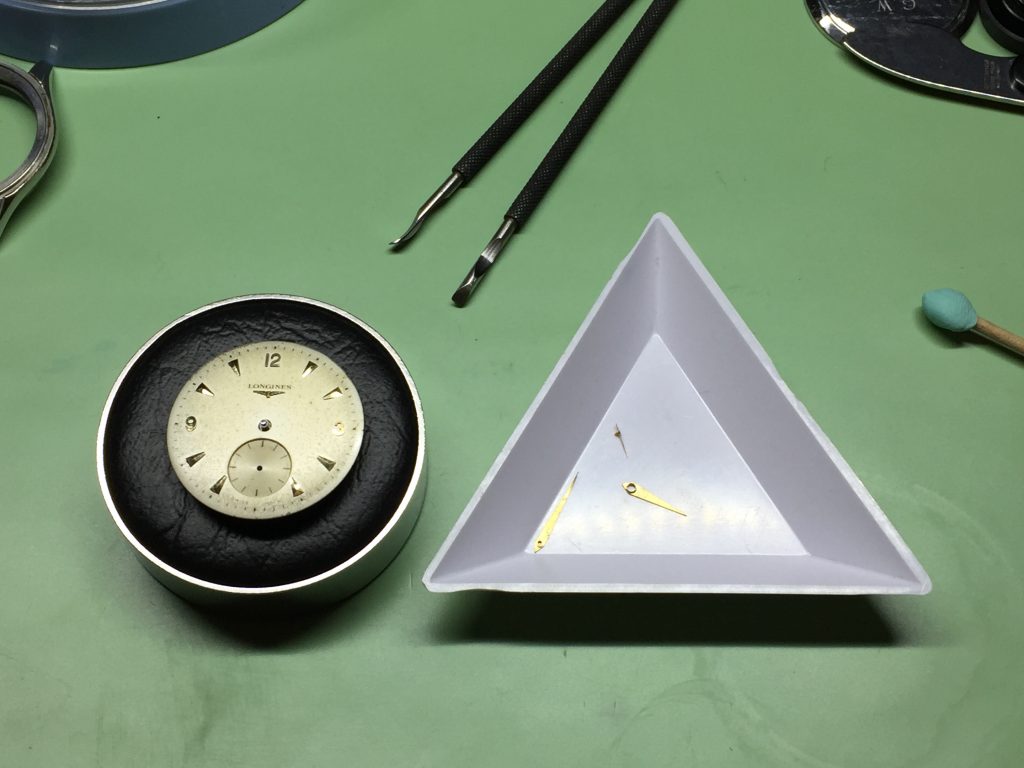 This now leaves the dial side of the movement exposed. 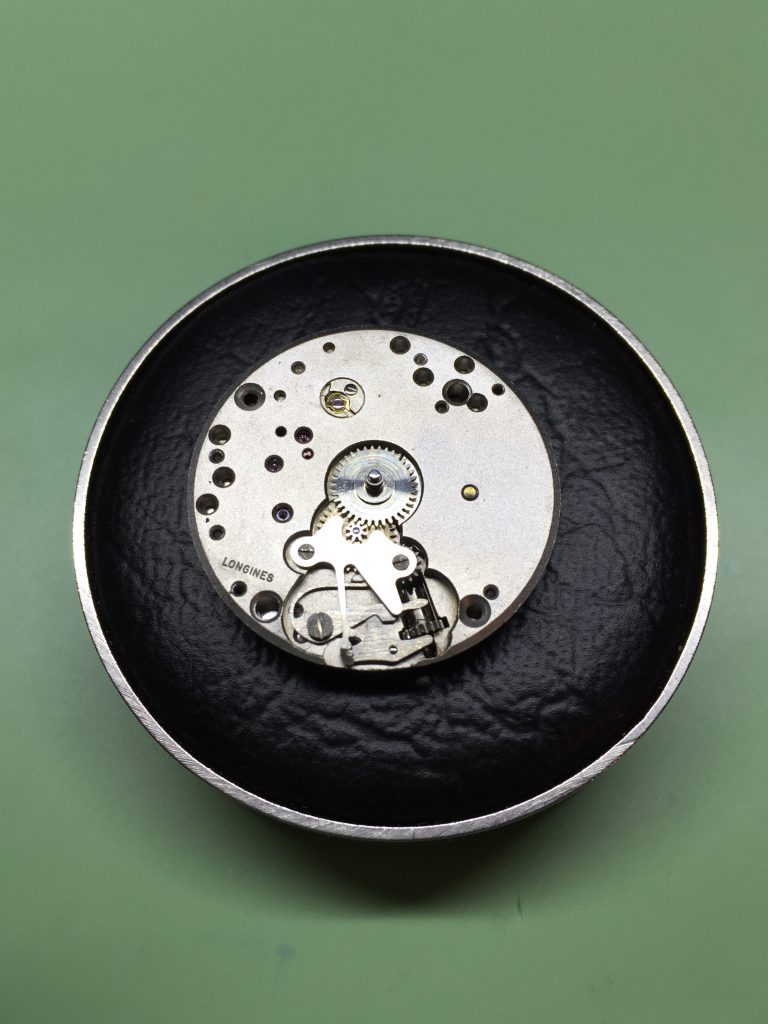 The strip down of the movement can commence.

I will just point your attention to the beautiful finish of the keyless work, the mechanism which controls the action of the crown and stem: the components are machined from solid metal, a level of finish you do not see very often (these parts are often stamped or made of steel wire springs to reduce cost). 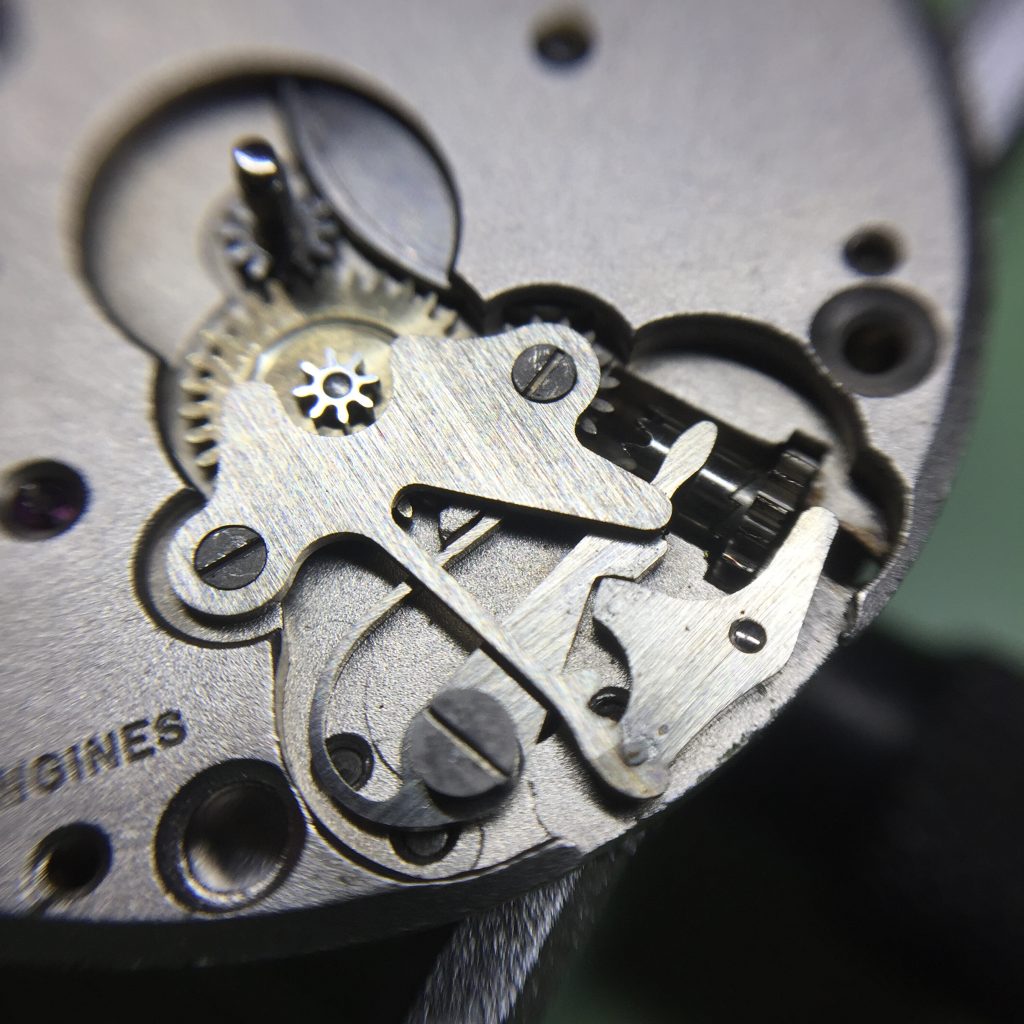 The dial side is fully stripped (except the cap jewel which I will deal with later). 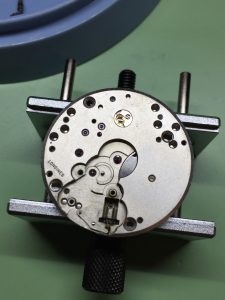 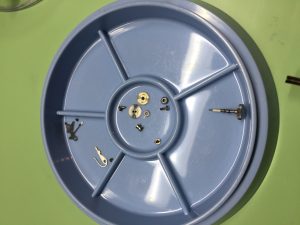 We can now start stripping the other side of the movement. 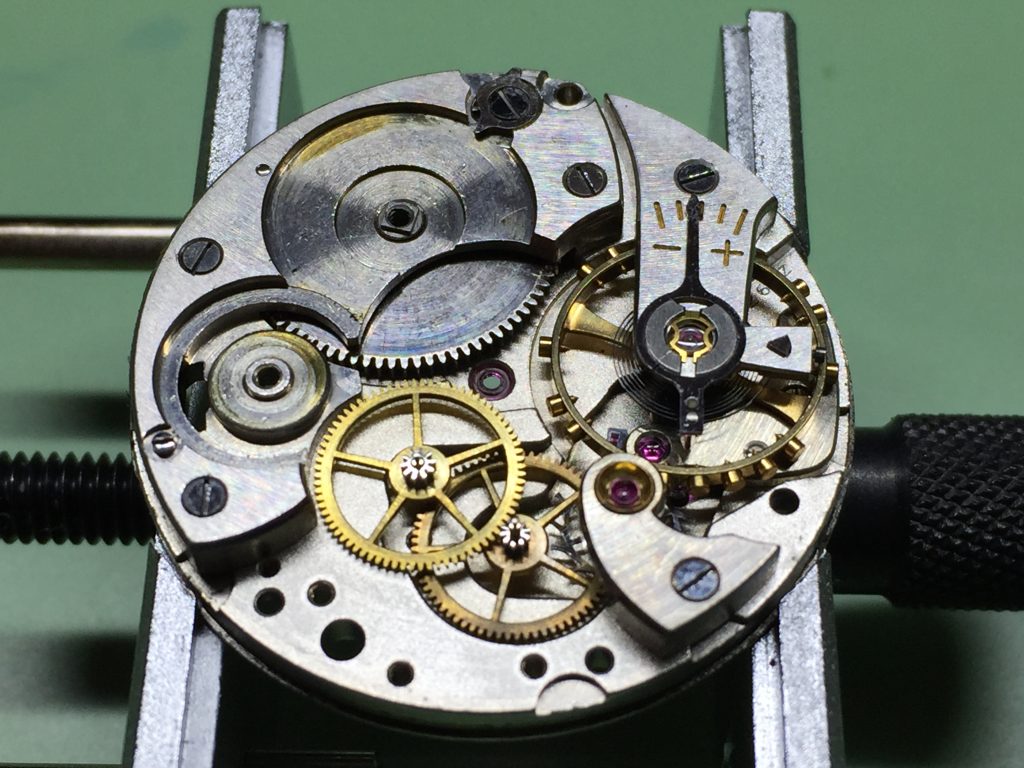 Another example of the beautiful level of finish on this movement, the snailing effect on the back of the ratchet wheel. This side is not visible when the movement is assembled, so it really is a treat for the watchmaker! 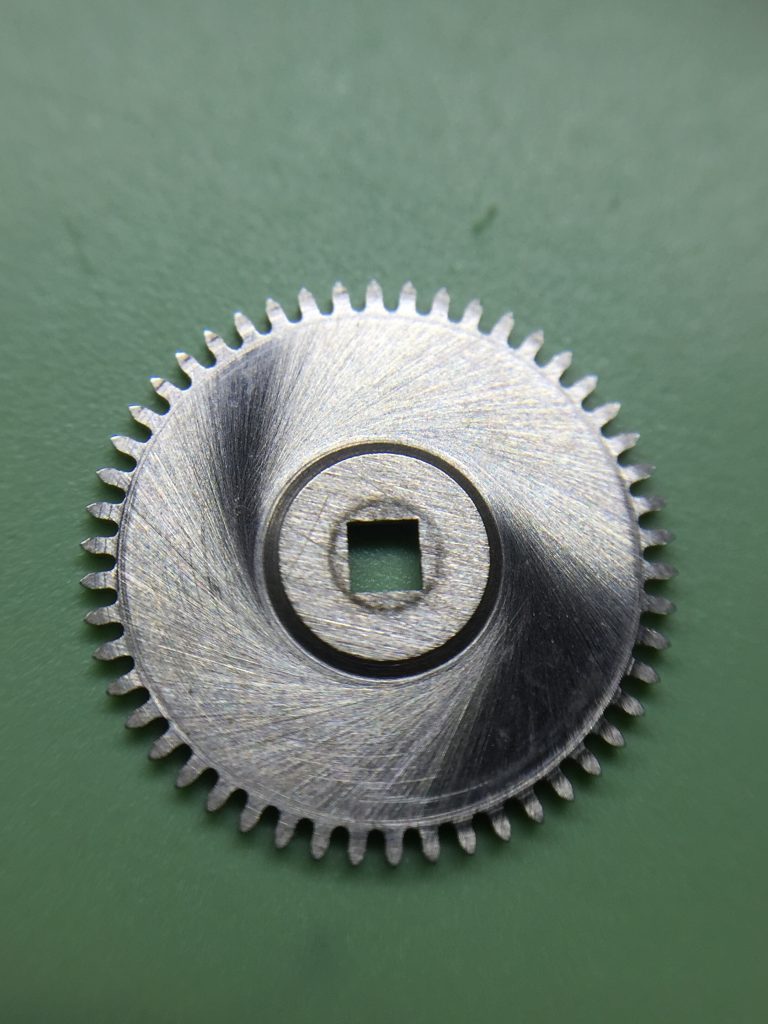 And eventually we get to this stage where the movement is fully disassembled, ready for cleaning. 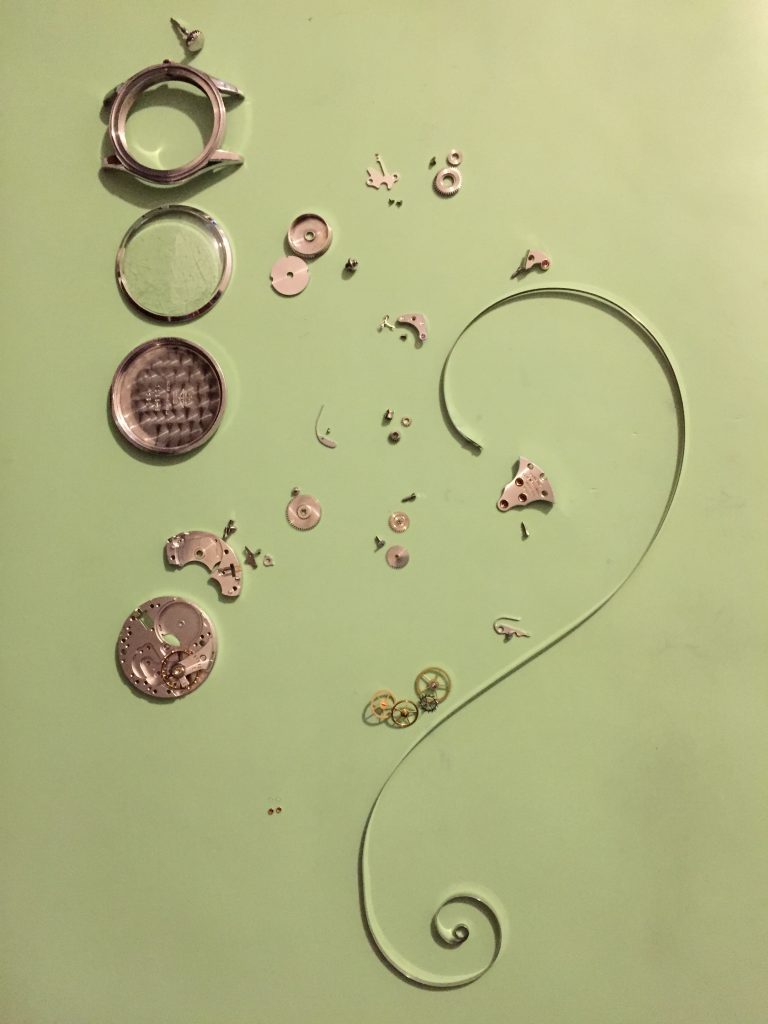 After cleaning of the parts, I start by reassembling the mainspring. 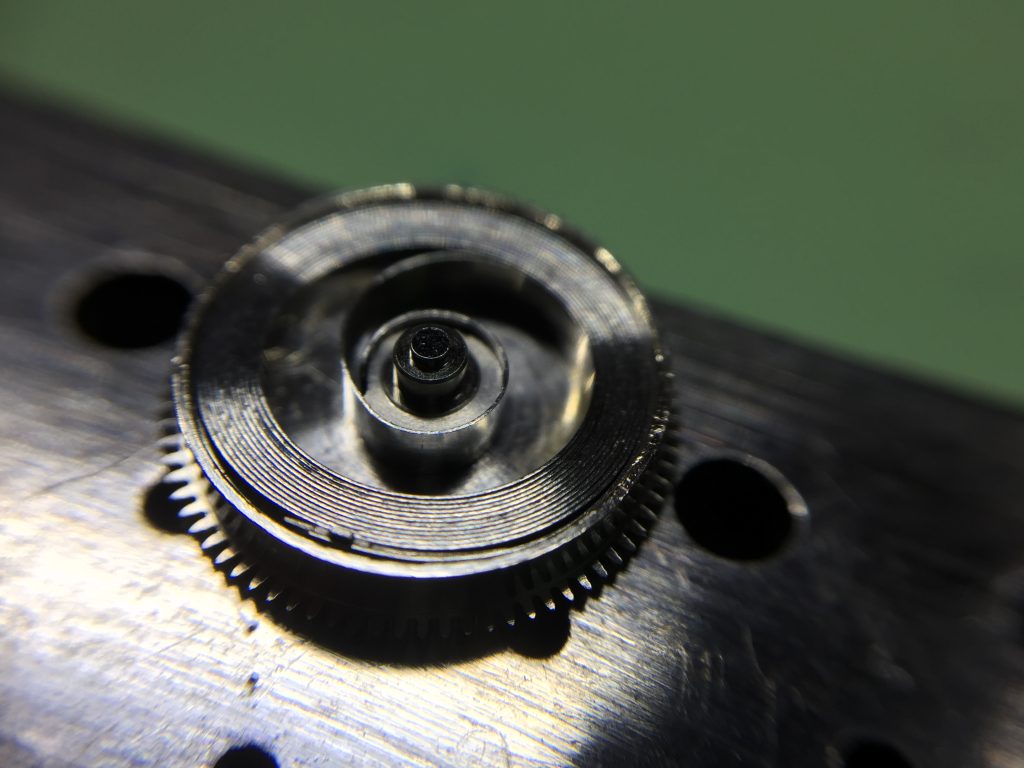 Then I move on to the cleaning and oiling the end stones of the balance wheel. Here is a photo of the jewel and its setting (chaton) next to a 20 pence coin to give you an idea of the scale. 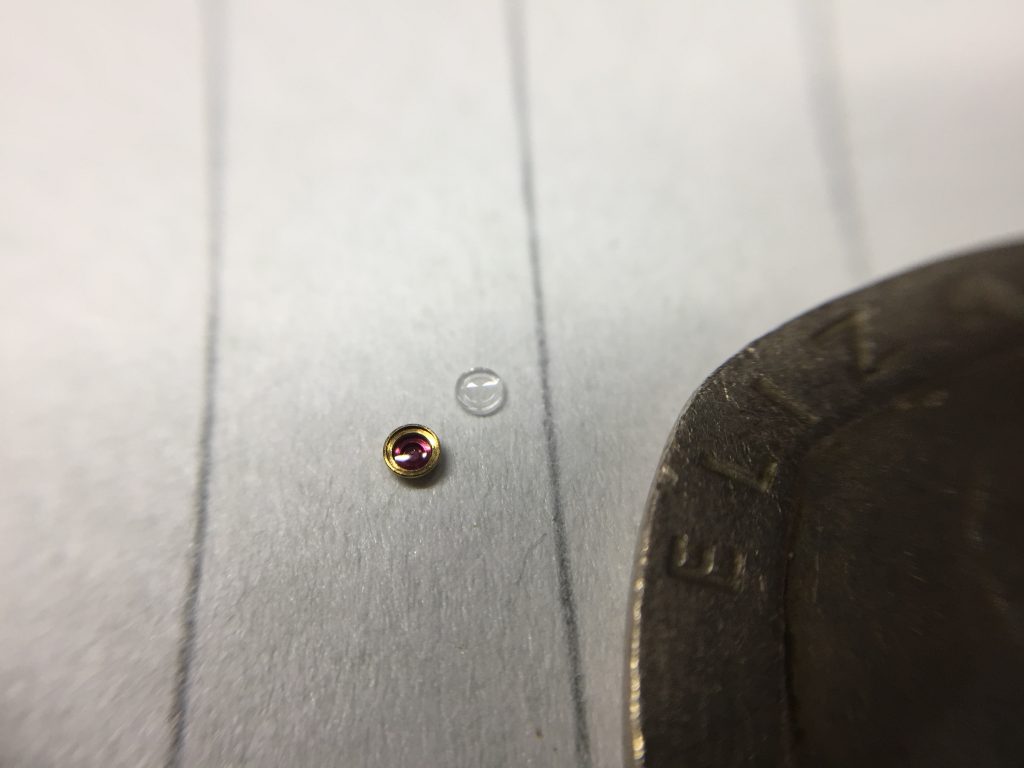 This is a photo taken part way through the re-assembly. As mentioned previously, I was very impressed by the level of finish on this movement aesthetically. The movement was also a pleasure to work on: manufactured to very tight tolerances, everything fits perfectly as it should. The layout with separate bridges for the escape wheel and the rest of the train also make the alignment of the pivots in their respective holes much more straightforward than with lower end movements. 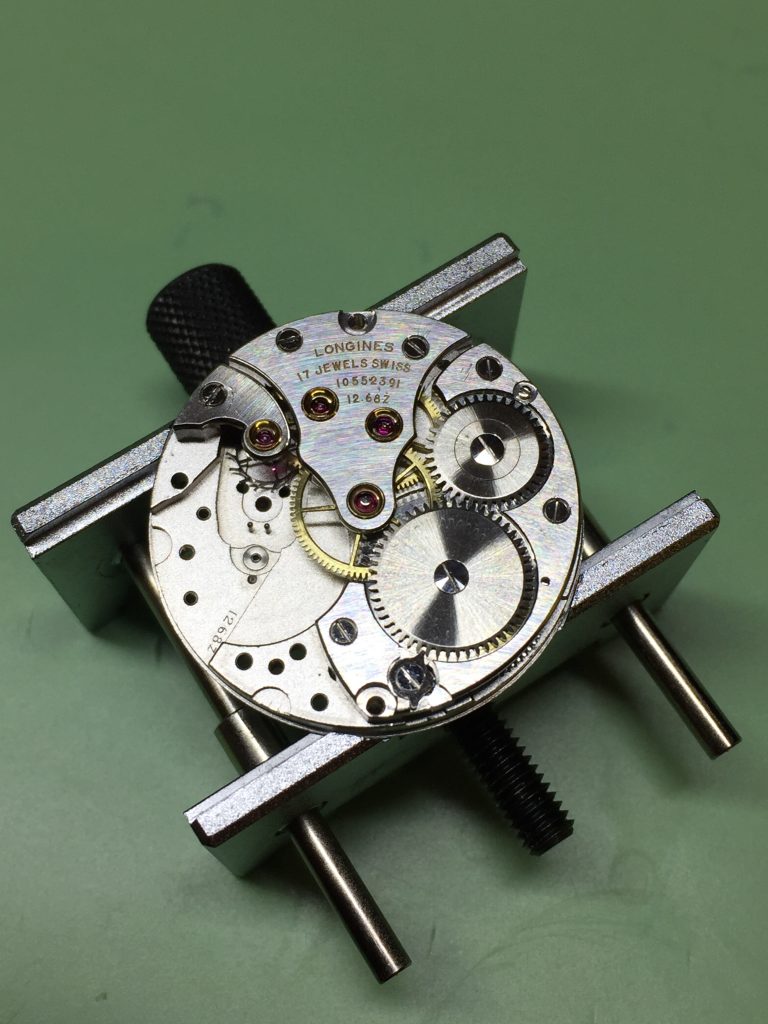 The movement responded very well to the service: the amplitude was much increased (in excess of 300 degrees). The beat error was also reduced as part of the regulation and adjustment process, and the watch ended up being an excellent timekeeper, with very little positional error (i.e. very little effect on timekeeping in different positions).

With the movement now fully assembled and ticking, I turn my attention to the case.

I start by polishing the crystal 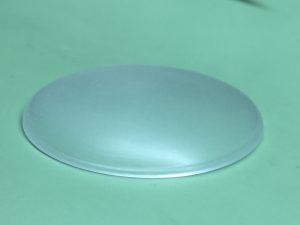 After initial sanding, it gets worse before it gets better! 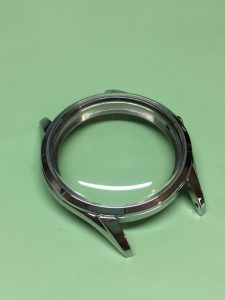 It is now looking much better. I also cleaned the case ultrasonically, and lightly polished it, being extremely careful not to round its edges. 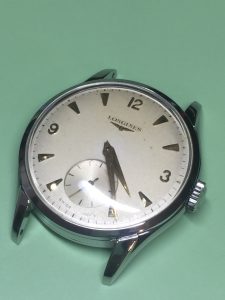 This watch has been an absolute joy to work on. It is now looking fantastic with a new bracelet. The dial cleaned up very nicely, so it can remain 100% original whilst looking great. It should now provide many more years of good service. 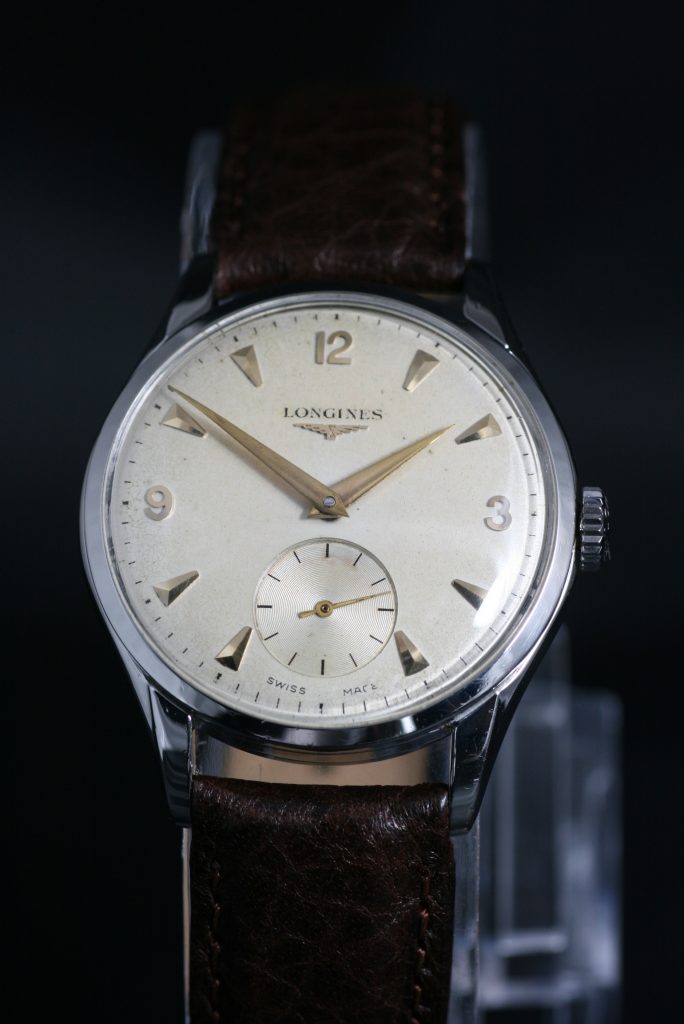